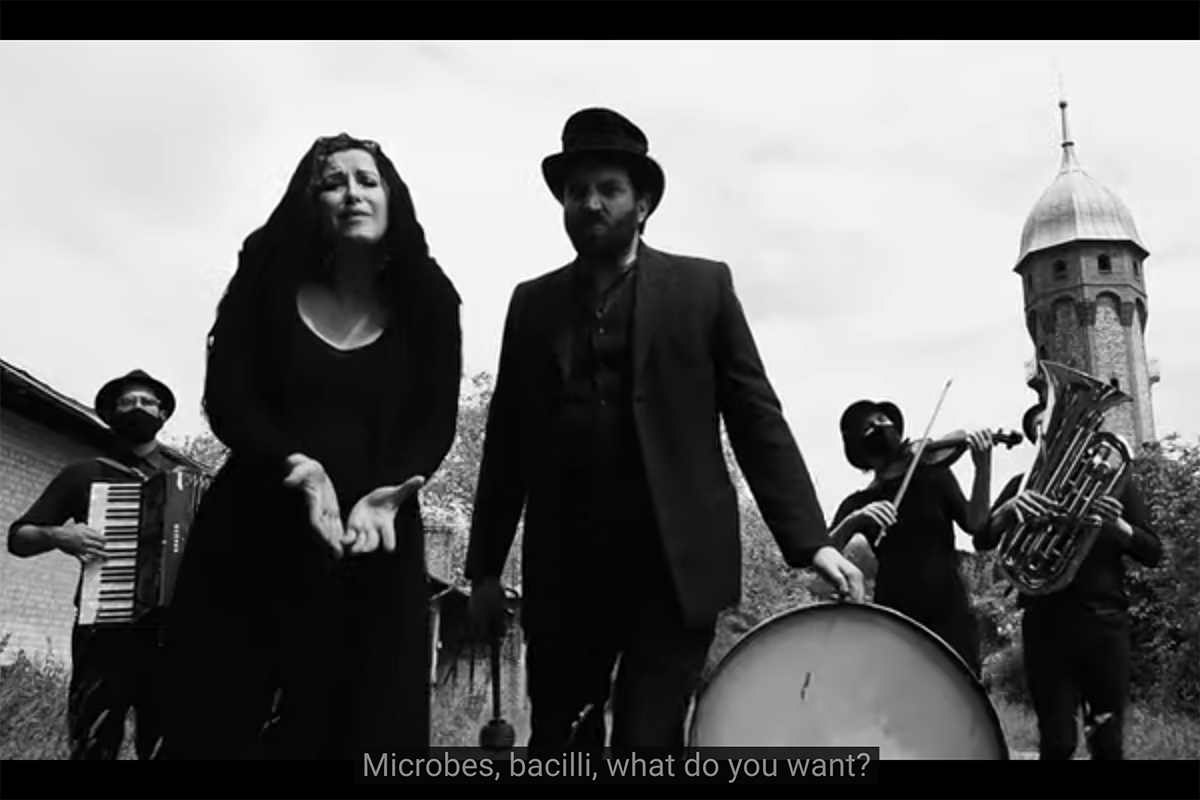 In 1916, Solomon Smulevitz, a Yiddish musician and entertainer who immigrated to America from Belarus, wrote “Mentshn-Fresser.” The song’s title means “man eater,” or “devourer of mankind.”

“The pale pestilence lives deeply buried in the lungs,” the song begins, and it goes on to tell the story of a terrible plague spreading across the world, with the speed of a raging fire.

Fast forward a century and change later, and Sveta Kundish — a classically-trained singer turned Yiddish musician, and the first female cantor in the history of the German state of Lower Saxony — was taking an online class at the Yiddish Worker’s Circle, when her teacher introduced the class to the song, translated and recorded by Jane Peppler.

The following day, Sveta and her partner, accordion player Patrick Farrell, who live in Berlin, had Shabbat dinner with fellow Yiddish musician Daniel Kahn — whom you may know from his amazing Yiddish cover of Leonard Cohen’s “Hallelujah” — and his wife, Yeva.

“I showed everybody the song,” Kundish tells Kveller, “and everybody got very excited because it felt like it describes our times precisely.”

And so, with the help of some musician friends and fellow Yiddishists, Kundish and Kahn set out to record of a version of the song. They released it last week, along with a dark, pandemic-themed video that incorporates a trove of historical footage.

Written in 1916, “Mentshn-Fresser” is not about the 1918 Spanish Flu. Rather, it’s about tuberculosis, which was one of the leading causes of death in the U.S. in the 19th and early 20th centuries. The song’s lyrics lament the viciousness of “bacilli and microbes,” but it also addresses the cruelty of war (the song was written in the midst of World War I) and of uncaring leaders: “Great deep graves are packed with corpses, and the masters, the emperors, play their chess.”

For Kahn, the parallels between then and now are very much on the nose. “I think maybe that was from a more refined time, when the corrupt murderers at the top would play chess,” he says. “Now, I don’t even know if they’re that sophisticated. But certainly, the ways in which this pandemic has been tied up with economic exploitation — inequalities between classes and countries and races, and the way that it has exasperated those disparities is painfully obvious.”

Just what was it like working on this pandemic song in the midst of an actual pandemic? “It was exciting and felt kind of risky,” he tells Kveller.

It was also a bit complicated. “Patrick and Sveta are a couple who are expecting a child,” Kahn explains. “And Yeva and I are a couple who have a young child who was born in December. And throughout the pandemic, after a few weeks of real isolating, we [decided to do] a double bubble where we started off by having a sort of careful picnic, and then eventually we started having dinner at each other’s houses. And as Sveta said, they came over and had dinner and we listened to the song. And then they came again, and we recorded the vocals and the accordion in my place, on my equipment. And then Christian David recorded the horns at home in his apartment. Vivian Seller recorded her violin part at home, on her equipment, Patrick put it all together. And that’s how we got the audio recording.”

“By the time we wanted to shoot the video, we were more or less able to move freely. Things have really opened up around Berlin,” he adds. “So Yeva found an abandoned farmhouse on the edge of Berlin and made friends with the former owner, who said we could shoot there. We shot the whole thing in one long day around this farm and then edited it for about a week.”

For Farrell, his biggest takeaway from the song “is this idea of what goes around comes around,” he says. “Everything old is new again. There’s also a lot that we can learn from studying our history, from reading old books, from learning all the songs. You know, 1916 seems a very long time ago to us, but it’s obvious that a lot of the issues and problems that we’re facing right now are the same after 100 years. Little has changed.”

“Yeah, but we can also take a cue from folks who struggled against the same problems,” Kahn adds.