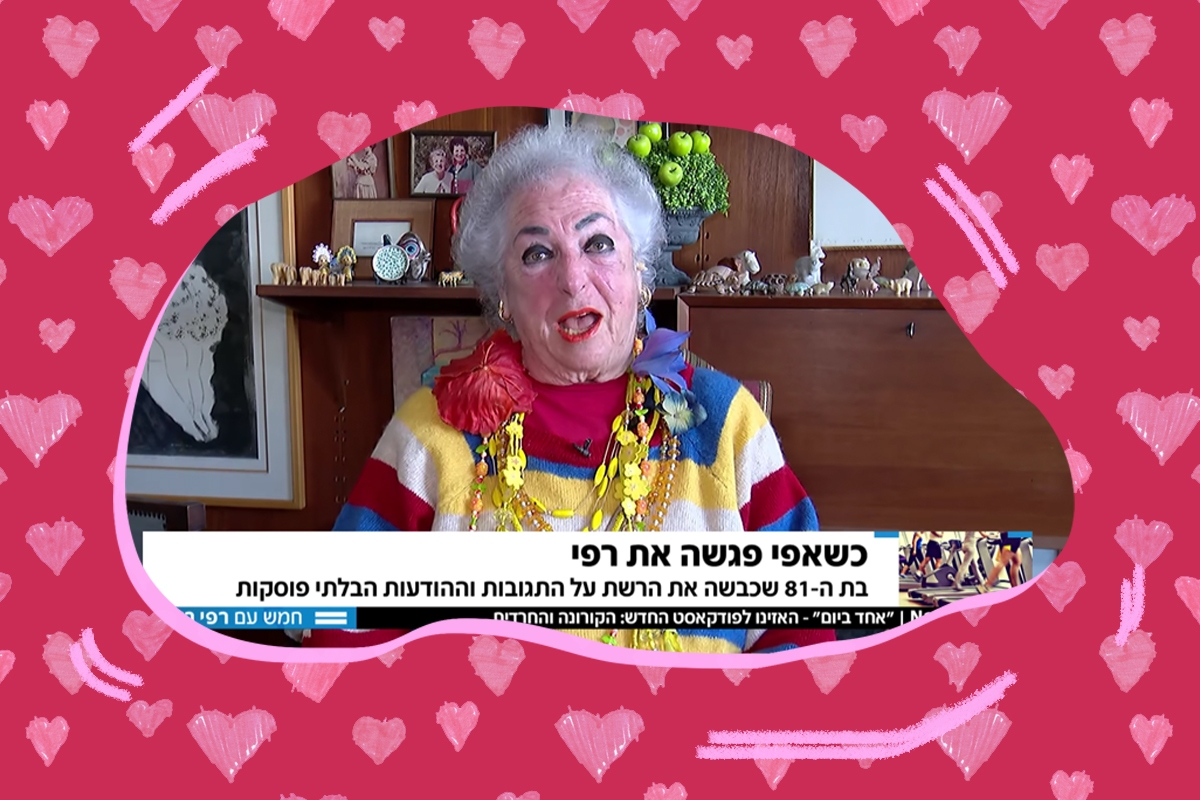 Every day I think to myself: “I sure could use a pick me up to get me out of this pandemic funk.” Most days, I trudge to bed in the evening, gloomy and unsatisfied. But this week, I’ve gotten my heart’s desire at last, in the form of an epic interview with an 81-year-old bubbe from New Jersey.

This Sunday, Israeli gyms finally opened back up, to the relief of many fitness-buffs, including one recently retired great-grandma, Effi Hertzke, who was interviewed by veteran Israeli talk show host Rafi Reshef on his Channel 12 show. What happened next was a moment of television that swept the entire nation with giddy delight.

As the interview opens, we see Hertzke on treadmill at a popular gym in Ramat Gan. Before we get to the amazing dialogue about to unfold, let’s take a moment to admire Hertzke’s outfit: she wears a pink shirt that says “BADGIRLS” (in a 2009 interview, Hertzke, who lives in Givataim, said she doesn’t buy any clothes that cost more than $10, and procures most of her 100% cotton T-shirts at the market). Her makeup is anything but understated. Big colorful earrings dangle from her ear — a daring choice for an active workout.

“Who am I talking to?” Hertzke asks obviously unaware that Reshef is one of the biggest names on Israeli television. As she speaks, she mixes Hebrew with English in a manner that’s utterly delightful.

“I want to be a star,” she tells Reshef early in the interview, her Hebrew delightfully heavy with a New Jersey accent, after saying how lucky he is to be able to see her because she can’t see him. Reshef promises to help her on her quest for fame.

When he asks her what she’s been up to at the gym that night, she replies, “ani al haofniam,” using the Hebrew word for “bike.” “No that’s not ofnaim,” she quickly corrects herself, “that’s a walker, halichon.”

“Oh my gosh! Ata rotze lir’ot et ha’muscles sheli?” she says, asking Reshef if he wants to see her muscles — and then, of course, shows off her guns.

Reshef, who is always a bit of a grump, says that he can see she hasn’t been at the gym for a while.

“That is disgusting,” she scolds him in English. Then in Hebrew, she added: “Look what a body I have!” (Love!!!)

Reshef, properly chided, replied that he meant it in the positive, meaning that she has something to aspire to. And Effi forgives him because she is magnanimous and glamorous.

“I was working out at home, and I work and I walk, and I play with four great-grandchildren, and it’s fun,” she told Reshef.

When he asks her if she’s vaccinated, Hertzke replies, “Of course, I work at the hospital! I must be!” (In order to attend gyms in Israel right now, you have to either prove you are vaccinated or have Covid antibodies.) Apparently, Hertzke—  who worked until she was 80, as both as a nurse and running her family business of restaurants and university cafeterias — volunteers with patients in rehabilitation at the Reuth Hospital.

When she reached that milestone birthday, she tells Reshef, her kids and grandchildren told her, “Bubbe, stop!” But, she says, she couldn’t stop — when you’re as vital and spunky as Hertzke, that makes sense!

“What do you want to get done before you get home?” Reshef asks her.

“Maybe I can meet a young man who will invite me for some orange juice,” the sassy bubbe, who was widowed in 1977, replies.

She even hits on Reshef at the end, asking him if he’s married. When he replies in the affirmative, she doesn’t hide her disappointment. “Oy, too bad,” she tells him. “Have a good life, and a lot of love to all,” she says in her sendoff.

The interview went mega-viral in Israel, with troves falling in love with Hertzke. Some people are just born to be stars, after all! She subsequently received one of the highest honors of Israeli television: actor Roy Bar-Natan made an impression of her in the popular Israeli satire TV show Eretz Nehederet.

And Reshef, of course, just had to have our wonderful bubbe back on for a follow-up interview. In this segment, she lovingly calls him “Raffileh” and expresses how thrilled she was at her new popularity. “I didn’t think you had so many viewers!

“Jesus Christ, it was non-stop,” she continues. “I got 200 phone calls from people I don’t know at all. I don’t have a cellphone, at the gym they read what people wrote to me on Instagram — hundreds of people.”

In the follow-up, Hertzke wears her signature big earrings — this time of mismatched flowers — a colorful sweater, and a collection of bright plastic necklaces (which she collects). “For me, I am 27,” she says about her age, adding that  other TV shows have approached her as well.

“I am enjoying every second!” she adds. “It’s fabulous. I work at Reuth hospital, I see the hardest thing in the world, and part of my job is to wake up those who are half-dead, and I know that every second you have to live like it’s your last.”

Hertzke also took the opportunity to share some feedback she got about Reshef: “You are cute, but they said you have to smile more — and how was it possible not to smile with me. So now I want to see a big smile. Raffi, you can do it!”

Reshef  — whom, as I established above, is not known for being a very visibly joyous person — breaks out in what I assume is, for him, a big smile.

“When you’re around, you can bring your wife and have a cup of coffee!” she tells him before wishing him farewell for a second time.

“I don’t understand what this whole ‘Effi business’ is about,” she said in another interview for the Chai Ba’Laila show. “This is me, everyone who knows me, knows exactly who I am, and suddenly I’m the star of Israel… I think because maybe the country suffered so much this year, the entire world, maybe a little ‘breath of fresh air,’ that everyone needs a smile.”

In a 2009 interview, Effi was asked about her incredible style. “I’ve always dressed this way. I’m a middle child, my sister is a well-known author who lives in Nice [Susie Morgenstern], and my other sister — she’s so beautiful.” So, Effi had to find her own way to stand out — through fashion and make-up. “From age 13, I started wearing make-up and people would ask my mom, ‘How do you let her walk like that, she looks like a prostitute,’ and my mom would always say ‘lift your head high, never care about what others say about you.'”

Hertzke loves getting a reaction out of people; she said she wears mismatched shoes, earrings, and different colored glasses every day. She used to paint each one of her nails a different color. Her children and grandchildren used to be embarrassed by it, she professed, but now, they celebrate it.

“I love causing shock… I love a response, especially when I go to classical music concerts. You can’t imagine how much I love it when people elbow each other and say ‘see, see!'”

We should all inspired to be so confident and delightful. Truly, can Effi be our bubbe, please?!