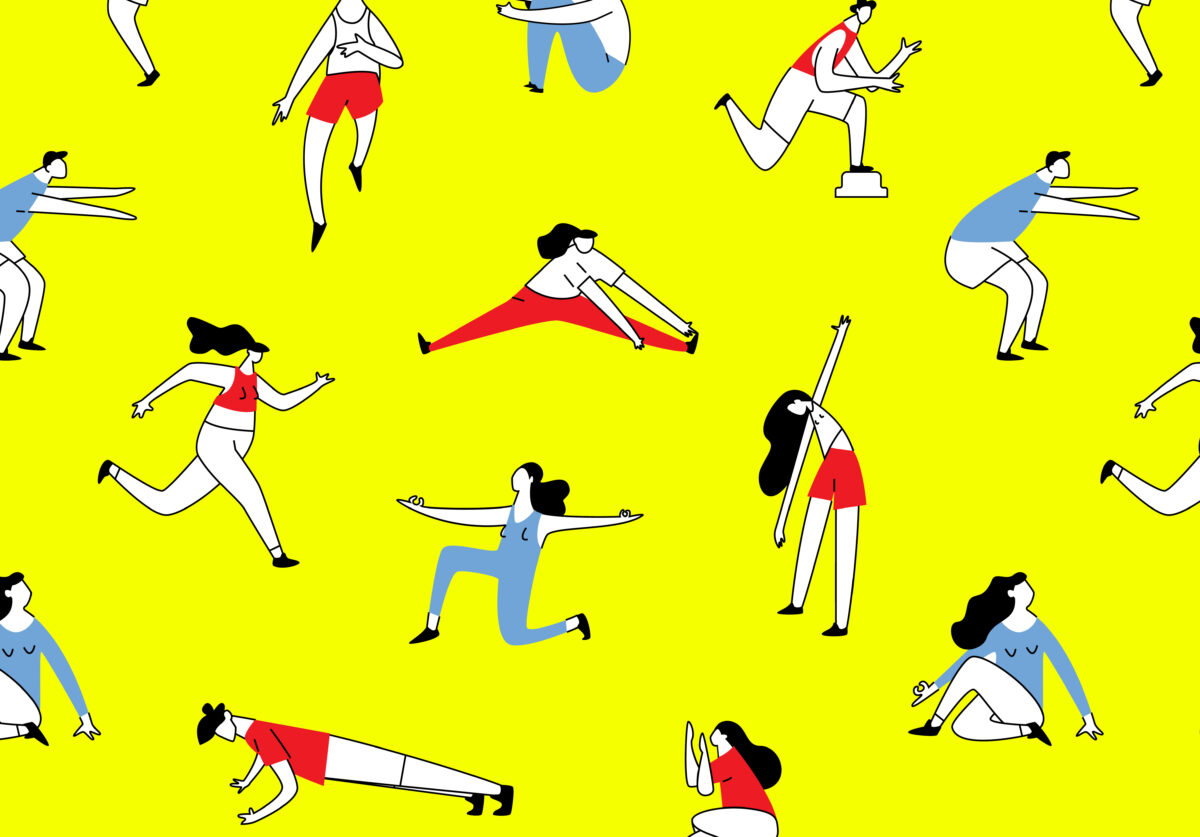 Almost 18 years ago, I had a full-term stillbirth. I went to the hospital after nine months of pregnancy expecting to give birth. But the umbilical cord was wrapped six times around the baby’s neck, and at the hospital, there was no heartbeat.

I was 40, still saying Kaddish for my mother, and it was traumatic. I am basically an optimistic, happy person, but I felt I would never know joy again. I went to a grief counselor who offered me two pieces of advice.

“Get out into nature as much as you can,” he said. “And exercise every day.”

“Every day?!” I said. “Impossible. I work full-time and have young kids. There’s just no way.”

I took his advice on both counts. I found that being around trees or the ocean was soothing — I felt calmer and I could forget, even briefly, about being sad. When it came to exercise, I joined the gym at Ramat Rachel, a kibbutz just a few minutes’ drive from my home in southern Jerusalem. I tried a few different exercise classes before I found spinning.

At first, I struggled to keep up, but soon the combination of loud music, fast pedaling, and a raised heart rate made the endorphins kick in. I got that “runners high” that people talk about. Within a few months, I was addicted, and found that spinning helped me find joy again. (I was also able to get pregnant again, and at 41 gave birth to a sweet baby I named Mishael Shalom after my mother. Today he is almost 17, six feet tall, and still sweet. If you know him, please don’t show him this article.)

All these years, the gym remained an important part of my life. “It’s cheaper than a psychiatrist,” I used to say as membership dues kept going up.

But then there was a plague. And a lockdown. And another lockdown. When Ramat Rachel closed, then opened, then closed again for months — like all gyms in Israel — I was left without my spinning classes. Videos just didn’t do it for me. I need a teacher telling me what to do, and making sure I actually do it.

Beyond needing a real, live teacher, exercise classes fulfill a social need for me. I am a social person with a wide circle of friends. My life under coronavirus has been better than many others: Two of my kids still live at home and I am able to do my job remotely. We’ve actually enjoyed having so much time together as a family (even if the dishes seem to magically multiply in the sink). But I do miss my friends and the long conversations we shared.

My friend Robin told me about a trainer named Nurit who was giving outdoor exercise classes at 6:30 a.m. in my neighborhood.

When the alarm went off at 5:45 the next morning, I considered just turning it off and going back to sleep, but I staggered out of bed. Given the 10 children part, I came to the class expecting a frumpy, ultra-Orthodox woman wearing a skirt and hair covering.

Instead, I found Nurit, looking more like a Disney princess than a real person, and she was not haredi. She was tall, thin, and blond, and dressed in tight, brightly-colored exercise clothes. She’s the type of person I’d hate if she wasn’t so nice.

“There is no way that woman had ten kids,” I thought to myself, and I’m sure I’m not the first to think that. She does, by the way, and one of her daughters comes with her to class every day.

The hour-long class used just an exercise ball and a mat, and focused on core strength, balance, and flexibility. I’d always looked down on the “Pilates ladies” at the gym. I tried a class and almost fell asleep — it was so slow and boring.

Nurit’s class was not boring — it was really, really hard. I sweated like I did in spinning and found I could do fewer than half of the exercises, which, I admit, left me feeling a little demoralized. I thought I was in good shape from spinning, but I guess I wasn’t doing as well as I thought.

At the end of the class, Nurit came over to me and said quietly, “I can see you’re really trying hard. Good for you.”

Ouch! That’s the kind of thing I say to my less talented journalism students who can’t write their way out of a paper bag. But I like a challenge, so I ordered some equipment online, and signed up for the next morning’s class. This one used weights and was even harder. I borrowed a friend’s two-kilo weights (that’s just under four and a half pounds) and had to put them down halfway through the class.

The women, most of whom knew each other from Nurit’s classes in a neighborhood gym, were friendly and welcoming. We social distance and make sure to stay six feet apart while exercising. Nurit stands in the middle, somehow managing to see what students dozens of yards away are doing. I guess that’s one of the superpowers you get when you have 10 kids.

She’s encouraging to everyone, especially women fairly new to exercise. During the class, as we huff and puff, there’s often an anatomy lesson, explaining different muscle groups and why strengthening them is important for everyday life. I even have my new favorite muscle, “brachioradial”, which sounds better in Hebrew: bracioradialis. If you don’t know where it is, go look it up. It is now known in class as “Linda’s muscle.” 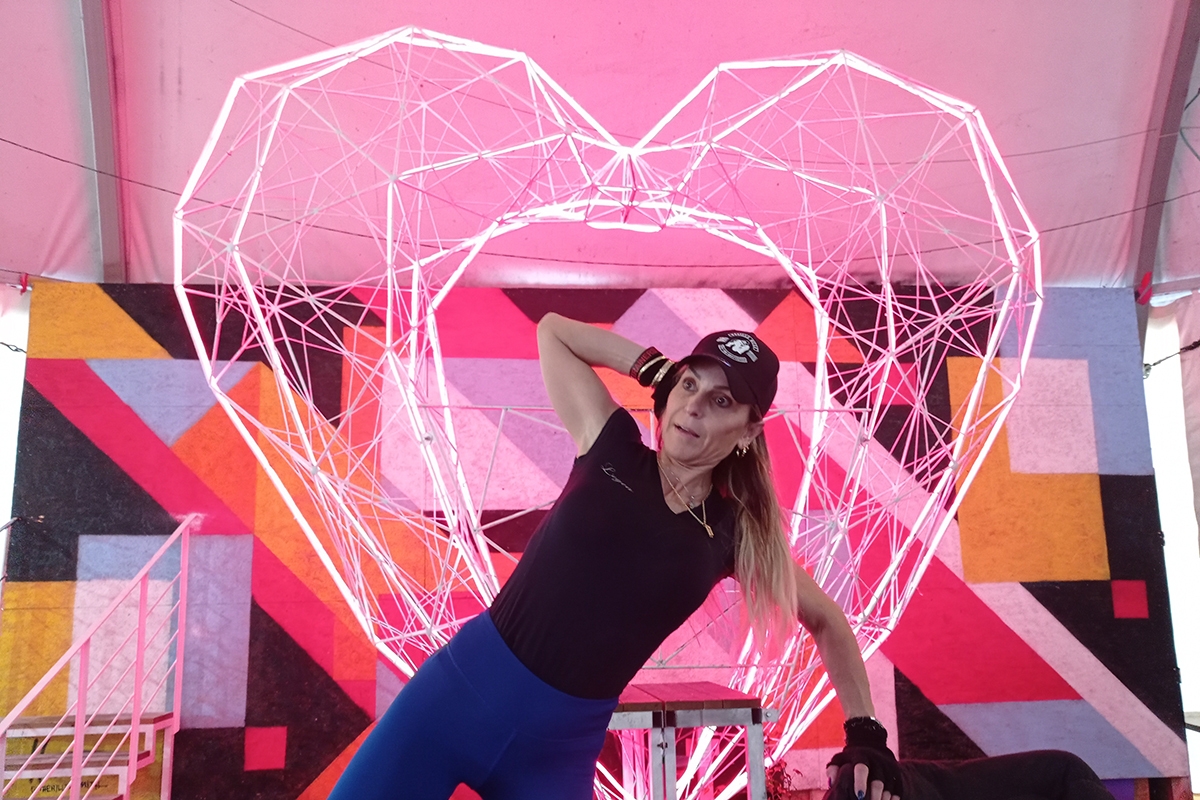 Nurit instructing the exercise class. Photo courtesy of the writer.

For some of us, there’s a Hebrew lesson. Did you know that “pachman” which you are supposed to be breathing out with each effort, is carbon dioxide?

And often, along with the workout, there’s a healthy dose of women’s empowerment. “I don’t care if you’re skinny,” Nurit said one day. “I care if you’re strong, and have balance and flexibility. As we age, that’s far more important than how much you weigh.”

Another day’s lesson was about falling. “My goal is that if you trip, your ankles will be so strong that you’ll barely feel anything. You’ll just keep going and barely notice that you turned your ankle.”

The women in the class range in age from 18 to 80. Among our more “mature” members is L., a retired dermatologist, whom Nurit calls “Dr. L.” She is in amazing shape.

There is B., who has 12 grown kids and lives in Jerusalem’s Old City and exercises with a head covering. I can’t even imagine what time she gets up to make it to a 6:30 class because she lives far away. There is S., a former Israeli female boxing champion, who comes with her beautiful daughter G., a dancer who will be joining the Israeli army soon.

It’s now been almost four months since I started Nurit’s class and I manage to get there almost every day. I have moved up to three-kilo weights and I am considering buying four-kilo as well. I can almost make it through a whole class, although I’m convinced Nurit keeps making the classes harder. While some exercises repeat themselves, there are always new ones. New women have joined the class, a few have dropped out. I still have work to do on flexibility, but my core strength and balance have definitely improved.

Israel has launched an impressive vaccine rollout, vaccinating almost a third of the population in the past few weeks. And yet, at the same time, the numbers of new corona cases keeps growing, and the country Israel is gradually emerging from a third lockdown. More than 1,400 Israelis died in January alone, and the country is now close to 5,000 total deaths.

Israeli officials have said almost the entire adult population will be vaccinated by the end of March. Even before then, Israel might open gyms to those who will get a “green passport” after two vaccinations. Like everyone else, I am looking forward to life after Covid-19. Nurit has said that, even after gyms open, she will continue her outdoor early-morning class a few times a week. As eager as I am to get back to spinning, I hope to continue to attend Nurit’s classes, too.

Most of all, I’m grateful that I’ll come out of corona healthy and even stronger than I’ve ever been.