Inspired By His Jewish Grandma, This Political Organizer Created a 'Bubbies for Biden' Campaign – Kveller
Skip to Content Skip to Footer

Inspired By His Jewish Grandma, This Political Organizer Created a ‘Bubbies for Biden’ Campaign 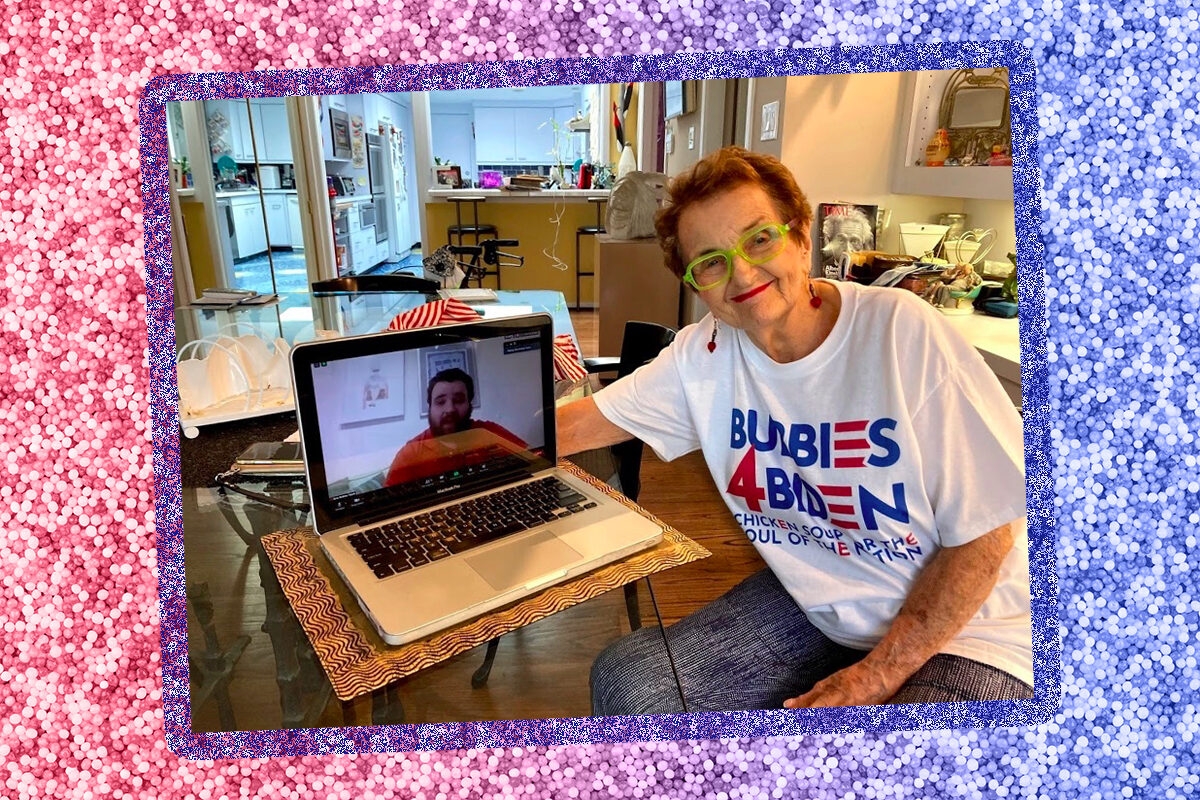 Andres-Tysch, who works as a digital organizer for the Texas Democratic party, was brainstorming ideas about how to maximize voter outreach when he was struck by an unlikely source of inspiration: his own Jewish grandmother.

Noting that his grandmother’s “hard work this campaign was 100% what sparked the idea,” Andres-Tysch launched a series of phone-banking events that deploy Jewish grandmas to make calls on behalf of the Democratic party. The initiative is called — wait for it — Bubbies for Biden.

Ruth Andres — known to Andres-Tysch as Gram — is a 91-year-old from Dallas who has been politically active for years. This election, however, “I’m more involved than ever,” she tells Kveller.

Drawing upon his Gram’s dedication, Andres-Tysch created this “friendbanking” event, in which participating grandmas make calls to people they already know, asking them to vote the Democratic ticket. The first Bubbies for Biden event was held on Wednesday night — via Zoom, of course — and two more are scheduled for October 27 and November 2.

According to Andres-Tysch, there are many reasons why bubbes are a great demographic for this type of work. First of all, he acknowledges that the network of Jewish grandmothers is tight-knit and engaged: “I knew that if we could get just one bubbe involved that, in no time, the network of bubbes across the country would activate,” he says.

Additionally, because people tend to really love the bubbes in their life, they are unlikely to hang up the phone when they call — even if the call is for political purposes. “You might ignore a text or call from a campaign, but ignoring a call from bubbe? I don’t think so,” Andres-Tysch offers.

Plus, I think we all know how convincing Jewish grandmothers can be!

As for Andres-Tysch, he is very passionate about working for Texas Democrats in a Jewish capacity. After all, Texas was the place that his Jewish ancestors immigrated to upon fleeing persecution in Europe, he notes. “In an election in which immigration is a front and center issue, I feel the responsibility to do for others what I’m so grateful was done for us in our time of need,” he says.

As for Andres-Tysch’s Gram, she made a video pitch for the Bubbies for Biden site, asking for her fellow bubbes to vote early. “Go get your vote in,” she instructs. “Make it count!”

Another Jewish grandma, Helen, says that she voted for Biden and Harris because they have some  “rachmanous,” a Yiddish word meaning “empathy.” “These are people that care for everybody in the United States, no matter what age, what sex, what color,” she says.

(She’s hardly the first to use a Yiddish word to describe the Democratic nominee — Harris’ own Jewish husband, Doug Emhoff, recently referred to Biden as “a mensch.”)

After 35 bubbes attended the first Bubbies for Biden event last week, nearly 20 Jewish grandmas attended the second friend bank last night. After some designated schmoozing time  — as well as a 10-minute hiccup that involved helping one bubbe move her Zoom call from her iPhone to her iPad — Gram provided some welcoming remarks: “I wanna thank you all, gosh you’re like new sisters,” she said. “I think you’re fantastic… OK, y’all, back to work.” The session continued with Ezra and another organizer training each of the bubbes on the Vote Joe app, which was no small feat.

For Andres-Tysch, his work is inspired by the Jewish tenet of “tzedek, tzedek tirdof” — “justice, justice you shall pursue.” As it happens, these very words were displayed in Supreme Court Justice Ruth Bader Ginsburg’s chambers, and they are also depicted on artwork hanging in Andres-Tysch’s home office.

As for the remaining Bubbies for Biden events, Andres-Tysch is hoping for a good turnout. “Just like my bubbe’s kitchen table, before Covid, everyone is welcome!” he says.

And for those who have never phone banked, he offers this very Jewish advice: “Just like a narrow bridge, the most important part is not to be afraid,” he says. “It may be a little nerve wracking, but the alternative is definitely scarier!”