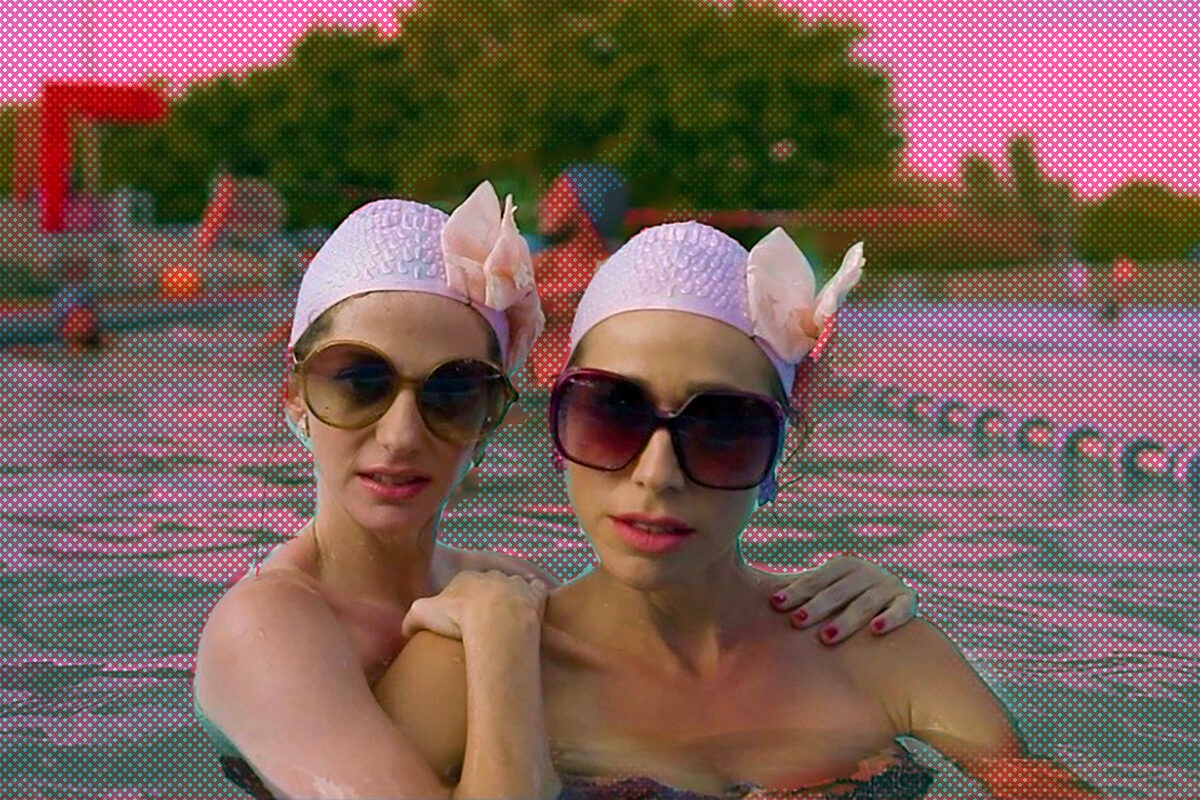 There’s a new Yiddish group in town, and they’re nothing like anyone or anything else out there.

Vibers —  the name is a play on vayber, the Yiddish word for “wives” or “women” — is comprised of Israeli actors and singers Michal Karmi and Yael Tal. They’re sexy, they’re talented, they’re funny, and they’re bringing some much-needed, unapologetically Ashkenazi grandma glam to the Yiddish music scene.

The two just released their first single, a modern cover of the Yiddish classic “Bei Mir Bistu Shein” — “To Me You’re Beautiful” — written by Jacob Jacobs and Sholom Secunda in 1932 as part of a short-lived operetta. It was later popularized by the very non-Jewish Andrews Sisters in 1937. The song “catalyzed the era of Yiddish swing” as our own Arielle Kaplan wrote in these very pages in July. And, as she noted, the tune was very much due for a comeback. So, yes, Kveller called it!

Vibers’ version is unique, cheeky, and even offers some Yiddish rap. Honestly, we’re obsessed! (And, also, we can’t get it out of our heads. Help!)

Tal and Karmi told Mako that the project was inspired by the Israeli band A-Wa, who create infectious, modern takes of the Yemenite folk music-based loved by their Jewish grandmothers. Similarly, the Vibers team wanted to pay tribute to the Yiddish music of their youth.

Specifically, Karmi tells me over a late-night video interview from lockdown in Israel, her bandmate’s grandmother would actually sing “Bei Mir Bistu Shein” to her as a lullaby when she was a child.

The project was completely self-visualized and self-funded, and a huge undertaking at a difficult time — Tal and Karmi are both theater actresses, and due to coronavirus, theaters in Israel were shuttered, putting their livelihood at stake. “People kept asking me why [we were doing this project], and I was like, why not?!” Karmi tells me.

As the band says in a press release: “We understood that we had a real, honest longing for the music, the language, and our roots, and we asked ourselves, can the Yiddish folklore we grew up on become something modern and sexy?”

They’ve certainly succeeded in making it so. The choice of this flirty song, which all about a woman wooing a guy, is essentially the perfect sexy Yiddish song. (Originally, the song was a duet between two lovers, but the Andrews Sisters turned into somewhat of a feminist ditty.)

In the video, Karmi and Tal are shown flirting with a host of men, some of whom are also their background dancers — so they’re definitely bringing some thirsty, feminist energy to it all. The aesthetics of the video are just perfect: huge sunglasses, retro-printed swimsuits (from the Israeli swimwear brand Rayo Swim), red fingernails, and bright lipstick, which reminds me of my own Ashkenazi great-grandmother, who never left the house without her own signature shade of bright pink on.

Tal and Karmi snack on some Ashkenazi staples in the video, like chrein (that’s horseradish) on crackers and matzah balls. The two also drink compote in the video, poured into Krystal cups that belonged to the grandmother of Karmi’s husband, a Holocaust survivor. The level of detail is honestly insane.

There’s also a lot of humor to the video, funny little gestures and gags from Karmi, Tal, and the rest of the cast. That was important to the duo, as they really wanted to bring some real characters to this video (as well as some sun safety reminders — because, yes, lots of pale Ashkenazi bodies in the house).

Then there’s the backdrop: While it might look like the video was shot in Florida, it was actually shot in Tel Aviv, in Country Dekel, an Israeli country club close to Karmi’s home. (Yes, in Israel we call them “country,” pronounced with a heavy Hebrew accent that may make the word sound like a bit like a curse word).

If you’re looking for a point of reference, the Israeli “country” is kind of the equivalent of the JCC pool/gym — during the summer and school holidays, these clubs teem with children running around on the grass, filling (and warming, let’s face it) the pools to the brim, eating Israeli-brand popsicles and packed lunched while their parents desperately try to get a second of R&R on one of the uniform, tarp-like beach chairs.

During the week, these clubs are popular among Jewish grandparents, who tend to swim in the heated pools with huge plastic swim caps and combine a workout with some social banter at the tennis courts. The aesthetics of these places have remained mostly unchanged in the many decades since they were built.

In other words, it’s the perfect setting for Jewish Ashkenazi grandma chic.

This version of “Bei Mir Bistu Shein” features both electronic beats and klezmer, making it both super-modern and nostalgic. It was produced by Yishay Raziel, who the band say was the perfect person to bring the song’s sensibilities to 2020. And there’s a rap verse from iconic actor and rapper Michael Moshonov, AKA Moshon. Moshonov actually collaborated with Unorthodox actor Jeff Wilbuch, who wrote the Yiddish lyrics for the rap portion. And he also serves as one of the objects of the Vibers’ thirst, and honestly, we’re feeling the poolside romance.

Karmi tells me that the duo almost didn’t release the song — with lockdown and civil unrest in Israel, they wondered if it was really the right time to do so. But they decided that people needed some joy and brightness to distract them from this difficult time. And I must say, this vibrant, technicolor take on Yiddish music certainly has me uplifted.

Of course, Vibers are just part of a long line of iconic musicians who’ve covered the song, including the late, great Ella Fitzerald. In 1937, the song even managed to gain some popularity in Nazi Germany, where the Andrew Sisters’ version, which received a new German title (“Bei Mir Bist du Schön”) and English verses, swept the nation —  until its Jewish roots were discovered. So yes, “Bei Mir Bistu Shein” is not only a bop — it’s a badass resistance song whose energy we very much need right now.

What a great way for the Vibers to introduce their unique Yiddish vibe to the world. We can’t wait for more!