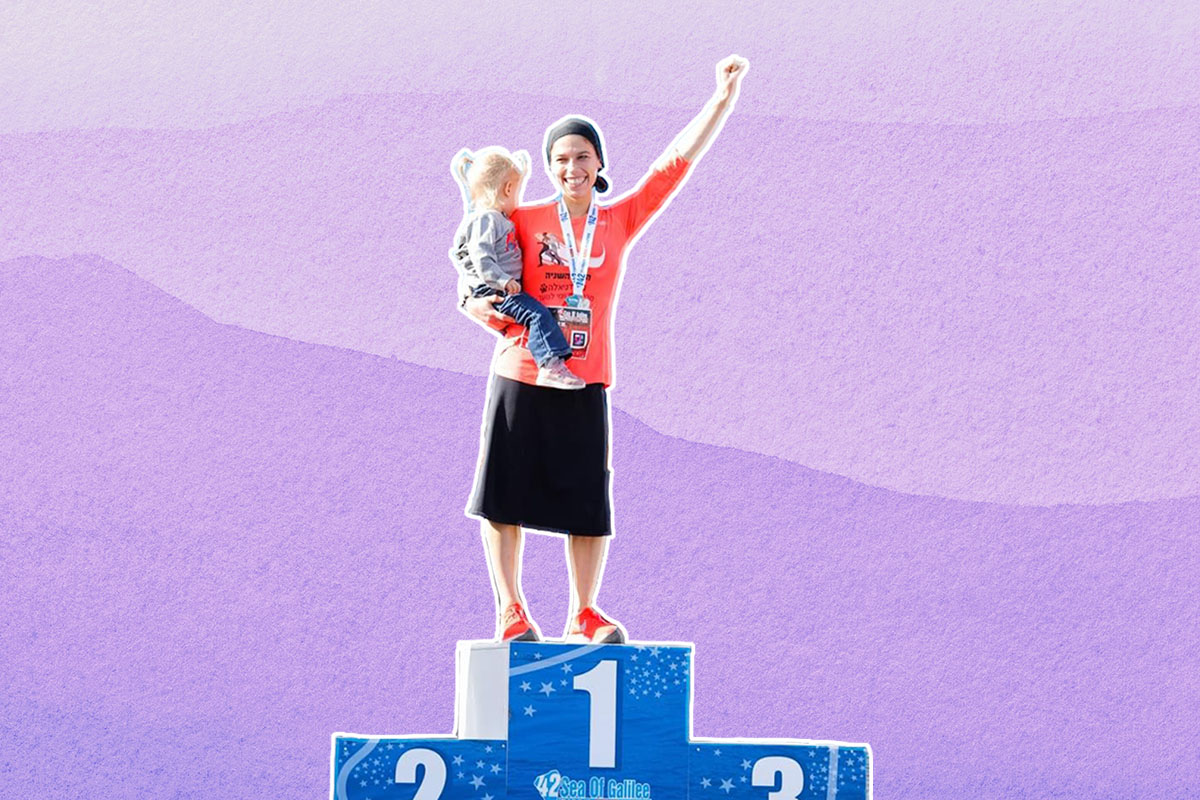 In 2016, U.S.-born Israeli Beatie Deutsch (AKA Marathon Mother) placed sixth in the Jerusalem half marathon — watching her, you’d never guess that the Orthodox mom took up running only four months prior. The following year, she ran the Tel Aviv Marathon… while seven months pregnant with her fifth child (really!).

Deutsch is an ultra-Orthodox Jew who keeps all the Jewish laws — including modest dressing. When she’s running, you’ll see her wearing a headscarf, elbow-length shirt and a knee-length skirt covering her leggings. Her modest attire makes her stand out from the other runners as an unlikely star athlete.

Just a few short years after her first race, Deutsch placed first in the 2018 Jerusalem Marathon. In 2019, she won first place in Israel’s National Championships Marathon in Tiberias, and she quickly became the Israeli national champion in the marathon and half marathon. Most notably, she qualified for the 2020 Olympics by ranking among the top 80 women runners in the world.

Many women, particularly those who are religious, see Deutsch as a role model for observant Jewish athletes. “We don’t have a lot of female athlete role models in Israel,” she says. “I want to see more girls becoming athletes and pursuing that passion. My ultimate goal in life is to share the beauty of Judaism, and impact people to spread light in that way, because I did not dream about being an athlete, ever. I wasn’t like, ‘Oh, when I grow up, I want to be a professional runner.’ I didn’t know that was such a thing.”

And though she became famous for her speed and her positive spirit, disappointments soon arose. First, due to the pandemic, the Tokyo Olympics were postponed until 2021. When that happened, the women’s marathon was moved from a Sunday to Saturday — meaning that Deutsch needed to convince the International Olympic Committee to switch the date, or else she could not compete in the race, as it coincided with Shabbat.

And then, in April 2020, runners needed to re-qualify for a spot in the Olympics — this time beating a new standard time (2:29:30) or ranking in the top 80. Unfortunately, while Deutsch ran a new personal record of 2:31:39 in England, she didn’t make the cutoff.

After publicly fighting for months to switch the race date and show observant Jews around the world that their religion matters, Deutsch was disappointed by her race results. Still, she kept a positive attitude after this major setback. “I know my time will come,” she says. “Plus, my PR is the same qualifying time for the World Championships (July 2022), which is a race not on Shabbos like the Olympics is. As much as I wanted to qualify for the Olympics, I knew that the chances of me actually being able to participate in the race were slim to none.”

“It might take me a week or two weeks or even longer to get over this loss and process my emotions,” she said on Instagram following her disappointing results. “When everything fell apart, my first thought was that this is from Hashem. Maybe this was to show the world that sometimes you don’t reach the goals you set and how you deal with things when they don’t work out as planned.”

Despite the setback, Adidas, one of the biggest sportswear companies in the world, took notice of Deutsch, and decided to highlight her because of — not despite of — her religious observance. With her usual headscarf, skirt and long sleeves, Deutsch was featured in Adidas’ “Impossible is Nothing” campaign, which hopes to unite people through sports and expand the limits of human possibilities.

Within Israel, the campaign is hard to miss — it’s online, and there’s a giant billboard of Deutsch on the Ayalon highway near Tel Aviv. “I couldn’t believe it,” she says. “It was a beautiful opportunity to make an impact as a proudly modest woman and Adidas chose to highlight that aspect of me.”

“I was so surprised that they wanted to highlight the fact that I’m a religious runner and that my faith is what moves me,” she explains. “It’s not necessarily what you’d expect from a big sports company.”

Deutsch sees running — and sports in general — as a way to connect to Judaism.

“Here I am teaching Judaism through sport,” she explains. By dressing modestly while running and still juggling the laws of Judaism, she shows people that you can be an observant Jew and still compete at the highest level. “I love sport, I love pushing myself, I love challenging myself, I love running,” she says. “I’m using this gift that Hashem has given me in a way to fulfill my mission here. I’m really blessed.”

Since her race in England to qualify for the Olympics, Deutsch has begun to train for the Abbott World Marathon Majors, which is taking place this fall in Berlin. The finish line will be at the historic Brandenburg Gate, where Hitler was appointed chancellor and proclaimed his plans to annihilate the Jews. “I couldn’t think of a more fitting way to demonstrate Am Yisrael Chai than by racing as a proud Orthodox Jewish mother,” she says.

Moms who want to have a family while chasing their dreams consider Deutsch to be their role model. “I see a lot of women on track and field showing up and saying: ‘We can continue to pursue our careers and still have a family,’” she says. “That is what’s revolutionizing the track and field world and I’m one of those women. Obviously, there’s more to juggle and balance. There are so many things I can’t do because I have a family. I can’t go away for altitude training, I can’t pick up and leave for six weeks. But at the same time, I see it as a great career opportunity for moms because my job’s flexible. I don’t train all day and I have a lot more time with my kids. I’m doing something I love while being there for my family.”