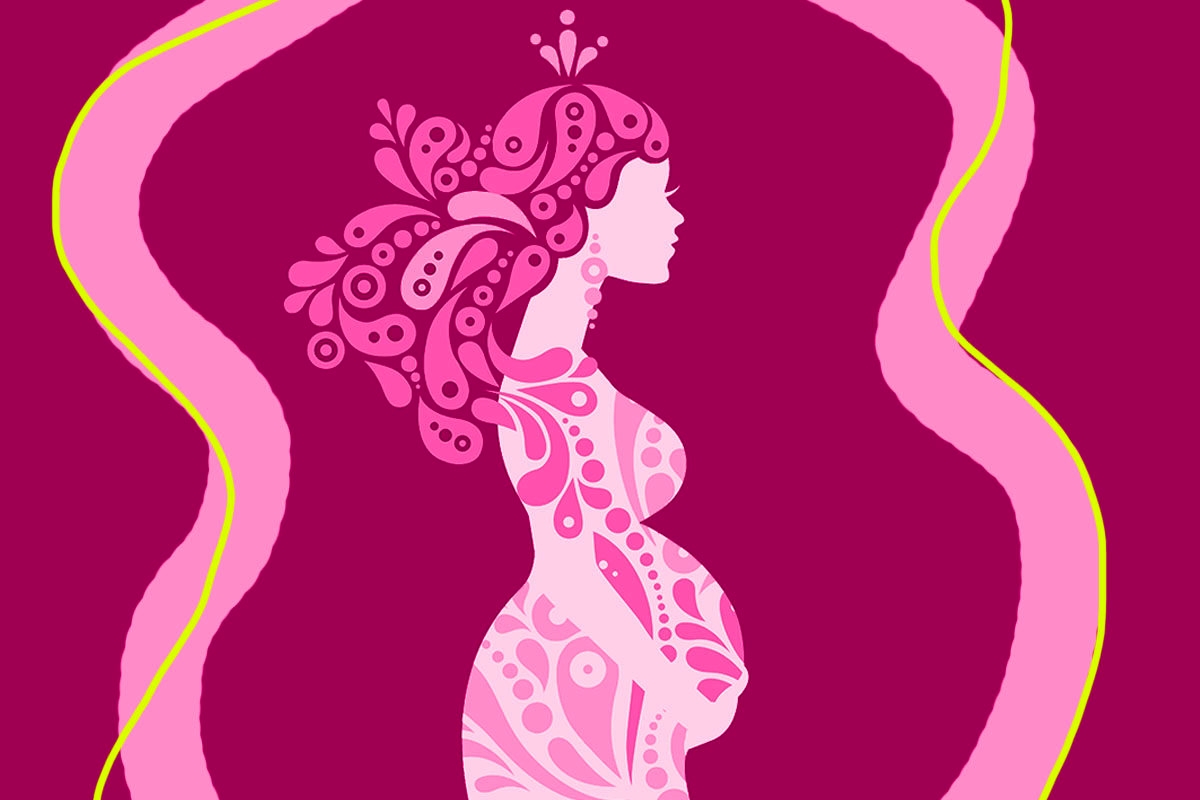 I began to suspect I was pregnant during a weekend away with my girlfriends at a British seaside cottage. My husband and I had been trying to conceive for a year and a half, and although I tried to stay calm about the fact that my period was a few days late and my breasts hurt, I soon cracked. On a supermarket cookie run, I slipped away from the group and presented a pregnancy test and box of tampons to the cashier, figuring I’d need one or the other.

The test was positive: I was 2 to 3 weeks pregnant and over the moon. On returning home to New York, where we’d been living for the past two years, a doctor’s visit confirmed the news and set an official due date of March 20.

I laughed aloud in disbelief. The baby’s due date was two days after my sister’s upcoming wedding, which was to be held in Miami, a three-hour plane ride away. We were in quite the pickle.

My sister and I are extremely close and the thought of not being at her wedding was inconceivable. Not least because she had met her husband-to-be at my own wedding — he was a school friend of my husband’s. We couldn’t have been more delighted that they’d hit it off. Their wedding, we often joked, would be even better than ours, filled with everyone we loved but with none of the hosting pressures.

“It’s VERY early days,” my parents reproached me when I mentioned the date clash, and refused to discuss it further. So we decided to put aside logistical worries until we hit the 12-week mark. In any other scenario, I wouldn’t have hesitated to tell my sister about the baby, but it felt cruel to present her with this unresolved obstacle, particularly as she was stressed out with wedding planning.

Despite the party line, I couldn’t stop my mind from picking at the reality of our conundrum. I learned that most airlines won’t allow a pregnant woman to fly after 37 weeks. I pictured my water breaking under the chuppah, gushing all over the rabbi’s shoes. Or, if the baby arrived early, I knew I couldn’t fly with an unvaccinated newborn in this day and age. The whole situation seemed unresolvable.

But then, my husband had the most wonderful idea: We should just move to Miami! This isn’t as crazy as it sounds — we’d both made aliyah (him from Venezuela and me from the U.K.) and then moved to New York. Home was a displaced, mutating notion. And as a freelance journalist, I could work anywhere.

The plan quickly gained pace. His boss agreed to him working remotely for a few months, and I discovered we could afford an apartment that was double the size of our current Manhattan shoebox, with a second bedroom and a pool. Best of all, my family would all be able to meet the baby right away. We settled on a timeline: We’d move a month before my due date (which also happened to be the end of our New York apartment lease — talk about bashert!) to allow us time to settle, and we’d stay in Miami until the baby had its four-month shots.

Our 12-week scan revealed a perfectly forming fetus, and I called my sister right away. “I’m pregnant and due two days after your wedding but don’t worry! We’re moving to Miami and I’ll have the baby there!” My sister couldn’t have been happier and we merrily daydreamed about sunny beach days with the baby.

But then, a month later, my husband returned from work with an expression that I knew would burst the glorious bubble I was floating on. His boss (the very same one who’d approved our Miami plans) had told him that the company was restructuring. It was too expensive to keep us in New York, especially as most of my husband’s team were based in Dallas. We could move there, or my husband could begin searching for a new job.

My mind sprang into action immediately. Keeping calm in chaos has always been a talent of mine, but this was more than that: It was my first time experiencing mom mode. The only thing that mattered was making the best decision for the lime-sized life growing inside me.

Moving to Dallas was out of the question. Staying with this notoriously fickle company was out of the question. Searching for a new job in New York was a possibility, but he’d need to find a company willing to sponsor our visas and, even if he did, what were the chances of them approving our Miami plan? While we loved New York, raising a child in the city would be extortionate, and we’d be far away from our families in England and Israel. It made the most sense to move closer to them, and I quickly weighed up London against Tel Aviv. Tel Aviv scraped a win.

I was deeply guilty about tarnishing my sister’s day. Though I wouldn’t have blamed her for feeling resentful that I’d split my family’s attention on an occasion that should have been all about her, she’d been heartbreakingly kind when I broke the news. In an effort to lighten the mood, she’d joked that she could stop stressing about finding a photographer, as “no one will want to put photos of the wedding on the mantelpiece because you won’t be in them.” My stomach tumbled to my feet.

A few weeks ago, we  returned to Israel. In between reacquainting myself with the healthcare system, reuniting with old friends, and re-learning the art of haggling, I sense the wedding and my birth date looming ever closer. When I talk to my family, we try desperately to reassure each other and ensure no one feels guilty: “Aren’t we lucky that we have two wonderful things to celebrate,” we say. Or, “We’ll look back one day and laugh.” Or, “It’s bittersweet,” which is the closest we’ve come to acknowledging the utterly shit timing.

I won’t be at my sister’s wedding. I won’t witness her becoming a wife, twirl her around in the middle of a joyful hora, or ensure she matches every drink with a glass of water. And my family won’t be there to witness my baby screaming to announce his arrival, to show me how to feed him, to take him from me so I can sleep.

But this summer, all being well, my sister and new brother in-law will play with my son on vacation. There will be many more things for my family to celebrate — sometimes face to face and sometimes over the phone — and we will remind each other that bittersweet is still oh-so sweet.

Image by Pimonova via Getty Images