9 Binge-Worthy Israeli Shows You May Have Missed This Year 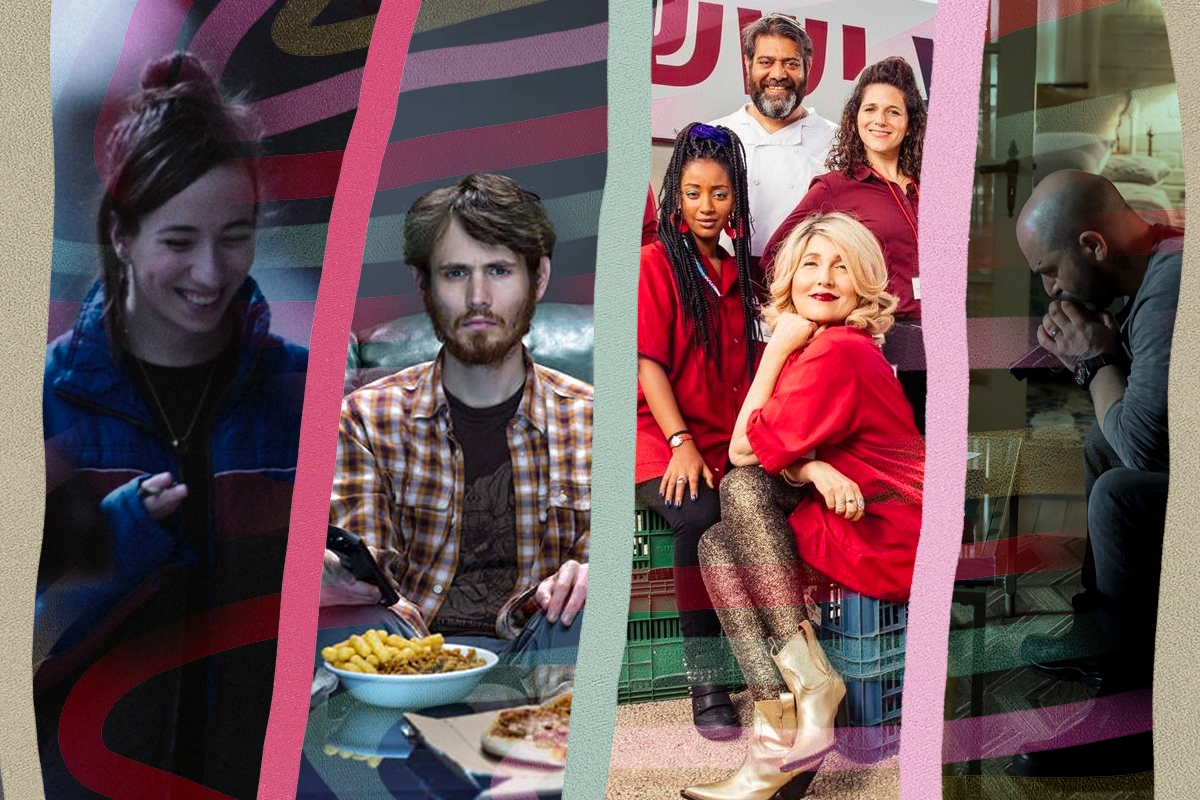 It’s clear that “Shtisel” season three was the main Israeli TV event of 2021 — and for good reason. The new and much-anticipated installment of the Israeli show about the ultra-Orthodox family of the same name made us laugh and cry and cry and cry (and also beg for a fourth season!).

But a handful of other Israeli shows landed in U.S.-based streaming services this year — mostly without much fanfare.

That doesn’t mean that these shows — and there are many! — aren’t absolutely worth watching. Israel has marked itself as an exporter of extremely compelling TV and the world appears to have keyed into this fact, with streaming services buying the rights to many great shows. While some of the most beloved and critically acclaimed Israeli shows like “Hazarot,” (“Rehearsals” or “Stage Crush”), “HaMefakedet” (“Dismissed”) and the much anticipated “Beauty Queen of Jerusalem” still can’t be streamed with English subtitles — many others can.

Before I get to them, I thought I should let you know that these shows are best watched with the original Hebrew dialogue — so unless you find it too hard to read captions (in which case, I’d argue the shows are still better watched than not watched), I’d avoid the temptation of dubbing — which, from my brief experience, detracts from the wonderful acting in these shows. Some streaming services, like HBO Max, have made it a bit hard to toggle to the Hebrew (and in some of these shows, French) language setting. Luckily, there are handy guides to help you with that.

And now, without further ado, dear reader, I’m thrilled to tell you that as the year winds down, you still have a lot of binging you didn’t even know about to look forward to! Let’s get into nine Israeli shows that premiered on U.S.-based streaming services that absolutely belong on your queue:

“On the Spectrum” (HBO Max)

Is this one of the most accoladed Israeli shows on HBO and you just didn’t know about it? Yes, yes it is. “On the Spectrum,” which comes from the same production company as our beloved “Shtisel,” is a show about three autistic individuals living in an assisted living apartment. It has won some big awards on the festival circuit and in Israel, and for good reason — the acting, the cinematography and the writing in this show are all masterful and rich, and the subject matter has rarely been broached with such intimacy and detail.

All 10 episodes of the show are now available to stream on HBO Max. It tells the story of Ron, a QVC-fanatic and programming whiz, Amit, who falls in love with a local waitress, and Zohar, who works at the Israeli coffee shop chain Aroma, and who is obsessed with finding a boyfriend. You follow their relationships, heartbreaks, disappointments and wins. More than anything, this show truly makes you love its protagonists and feel deeply for them.

While the show doesn’t have any autistic writers or main actors, an English language adaptation, “As We See It,” which stars three actors who are autistic, will be premiering on Amazon Prime this January.

This charming and musical 2016 show tells the story of Uri and Ella, the father and daughter duo who grow even closer after the death of the family matriarch — perhaps to their joint detriment. Shlomo Bar-Aba, an iconic Israeli comedian, plays Uri, an accomplished musician adjusting himself to life as a widow in his 60s. The show was co-created by Dina Senderson, who also plays his daughter, Ella. In real life, Senderson, like Ella, is the daughter of a renowned Israeli musician, Danny Senderson. But while Senderson has a prolific and storied acting career, Ella meanders, unable to find fulfillment in her work or her relationships.

The show is full of wonderful original music, created by actor and musician Gal Toren of the Israeli group Mercedes Band, who also stars in the excellent “Losing Alice.” Toren plays Ella’s brother, a musician that collaborates with his father and an independent musician who, more often than not, ends up known as “the son of.”

The show features other captivating stars, like Israeli musician Pablo Rosenberg as a chef and a friend of the duo, and Tzipi Shavit, a beloved Israeli TV personality and children’s television star, who plays Uri’s sister.

If you like a show that makes you think “what the heck am I even watching right now?!” then “Possessions,” a joint Israeli and French production, is for you. The show is about Nathalie (Nadia Tereszkiewicz), a French immigrant in Israel who finds herself arrested for murder on her wedding day — her wedding dress drenched with the blood of her new husband, a bloody blade in her hand. What happens next is, well, a trip.

As the murder is investigated by detectives Esti and Rafi, played by Israeli TV queen Noa Koler, who speaks French for the role, and Tzahi Grad, respectively. Natalie tries to unravel the mystery and clear her name with the help of Karim (Reda Kateb), a representative of the French consulate. Things get stranger and stranger: there’s superstition, misogyny (unfortunately, the “femme fatale” framing of Nathalie’s character is a bit problematic), murder and darkness. It’s an imperfect show but it is also truly unexpected, full of excellent performances that are deeply creepy and haunting.

This detective thriller dates back to 2019 and stars the gifted Hani Frustenberg as Anat, a detective investigating the murder of a refugee rights activist in South Tel Aviv. The show sheds light on the struggles and strife of refugees from Eritrea who arrive in the country and is the first Israeli show that centers on refugee characters — though it still remains, more than anything, a whodunit murder thriller.

The show stars Congolese Israeli actor Chancela Mongoza as a dishwasher who is suspected of the murder, and Eritrean actor Michael Tesfahans-Aforki as Ermi, who works as an interpreter for the police. “Fauda” actor Doron Ben-David plays another activist and Anat’s eventual love interest, while Dvir Benedek plays a notorious crime boss.

The show is currently exclusively available on the Jewish streaming service ChaiFlicks, which is starting to offer more and more appealing programming.

There’s a lot of mystery in these Israeli shows — and “Black Space” is no exception. The show centers on a school shooting and a detective charged with uncovering who the unicorn-masked individuals that perpetrated it are.

Israeli comedian and actor Guri Alfi plays detective Davidi, who is also a former student of the high school where the shooting took place. During his investigation, Davidi uncovers Black Space, a clandestine social media tool used by students of the school, and one that may help him find the culprits of the shooting.

Unlike in America, school shootings are a rare occurrence in Israel, so the show is not so much a commentary on gun violence as it is on bullying, the cruelty of young adults and the power of social media.

“The Attache,” streamable on Acorn TV, is another French-Israeli show, but this one has a very real basis. It tells a fictionalized version of the life of its creator, Israeli comedian, actor and TV writer Eli Ben-David, who is also the star of the show. Eli plays a successful musician, Avshalom, whose wife gets an important job as an attache at the Israeli consulate in France, making him move their entire family of three to Paris, where her own Jewish family resides. The same thing happened to Ben-David, who currently resides in France with his wife, Elinor.

For Avshalom, the move is an adjustment — he struggles with the language, with the culture, as well as the specter of terror, as Paris becomes the epicenter of an onslaught of terror attacks, making Avshalom, who speaks Arabic and who looks Middle Eastern, both a victim of antisemitism and Islamophobia.

While the show falls into melodrama at times, it is incredibly well-made. What I love most about it is how well it transmutes the transplant experience. As someone whose entire family was transplanted into a different country and culture when I was a child, so many of the struggles that Ben-David shows are real and familiar, and his ability to find humor in them is what makes the show enjoyable, despite its darkness.

As I’ve written before, “Losing Alice” is one of my favorite shows of the year. The cast is *chef’s kiss*. The suspense is intense. I really couldn’t stop myself from binging the entire thing once I started.

The show tells the story of Alice, played by the incomparable Ayelet Zurer, a prodigy filmmaker who puts her career on hold while raising her two daughters, with the constant involvement of her creepy mother-in-law, who has some serious boundary issues.

Alice is stuck, teaching the occasional film class and unable to finish her latest movie script. In the meantime, her husband, Gal Toren, has a successful acting career. But a meeting with Sophie, who hands her an incredible movie script that she feels she needs to make, throws everyone’s lives off-kilter. There are lots of secrets to uncover, along with steamy dark moments. The commentary about motherhood and working parents is also excellent. Yet, I would warn that the series does start with a graphic depiction of suicide, which may mean it is not for everyone.

Lior Raz, the creator and star of “Fauda,” plays the hero of this Netflix show — the first original Israeli Netflix production — which he also co-created. “Hit & Run” is about a happily married Israeli man who loses his wife to a suspicious hit-and-run accident. Investigating her death leads him to the U.S., where dark secrets about the woman that he loves are revealed.

The show stars Lior Ashkenazi and Gal Toren, as well as an accomplished voice actor and Tony nominee Sanaa Latham, who you may have recently seen in “Succession.”

Is this show as compelling as “Fauda”? No, it isn’t. But its talented cast make it an enjoyable enough binge when you need a distraction. Unfortunately, the show was canceled after one season, but I do hope the streaming service will take a chance on more Israeli productions in the future!

This Israeli mockumentary-style comedy show centers around a grocery store in the city of Yavne. It’s a little bit of “The Office” meets “Superstore” with a distinctly Israeli flare.

The show stars Noa Koler, who, as I’ve previously mentioned, is the queen of Israeli TV. Koler plays Shira, the manager of the grocery store, and she is kind of the anti-Michael Scott — idealistic, soft and kind, but also very passionate about the job. Shira has a poster of Steve Jobs in her office, and will sometimes quote from his book when she talks about the challenges of her position.

Popular comedian Keren Mor plays Cochava, a sassy employee who constantly clashes with Shira, while Amir Shurush plays an Arab-Israeli employee who is Shira’s biggest fan. Anyone who has ever been to a grocery store in Israel will find their antics intimately familiar.

So much of the show’s humor is so specifically Israeli that it may sometimes be hard for American audiences to follow, but hopefully, the comedic genius of its cast and writers can transcend those barriers. After all, “Checkout” is currently one of the most beloved comedy shows in Israel, and was recently renewed for a fourth season.