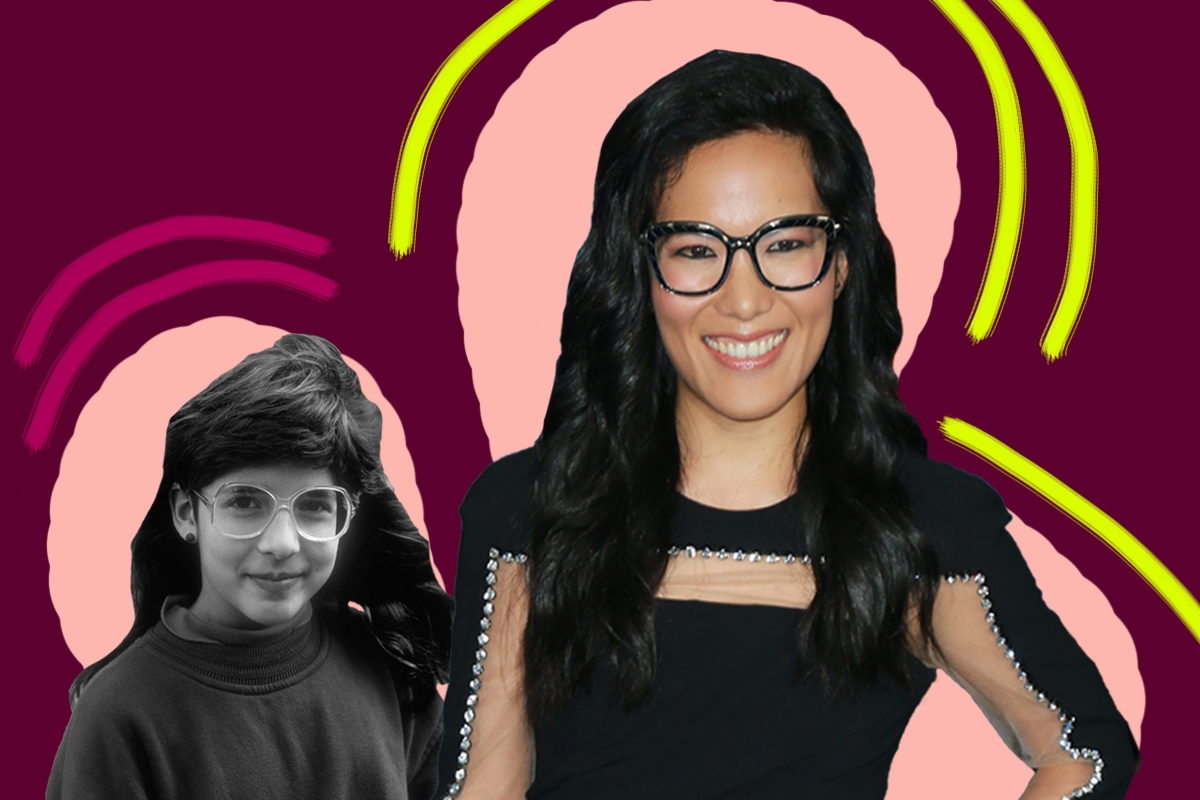 I recently watched the Ali Wong Netflix movie, Always Be My Maybe. The script sparkles and the cast — especially a hilarious meta-appearance by Keanu Reeves — are all delightful. But the real stars of the movie, in my opinion, are Wong’s glasses. Large and unapologetic, her statement lenses make quite the statement: “Let me show you just how fabulous vision correction can be!” This Glamour Magazine article breaks down several of Wong’s notable spectacles and offers ways to shop her looks; we learn that she often hacks sunglasses, popping in prescription lenses to get her trademark styles.

With the movie, her real-talk standup specials, and her new memoir climbing the bestseller list, Wong and her brand of smart, embodied, female-driven comedy are having a moment. Wong’s candor about pregnancy and parenthood, in particular, have won her legions of fans who appreciate her take on everything from diapers to double standards for dads versus moms. As if emphasizing that she views the full range of life’s joyful mess, Wong’s glasses, gloriously big and glam, are central to her vibrant cultural presence.

It turns out that oversized — and by oversized, I mean covering up half of your face — glasses are right on trend, and have been for some time. I found this out the hard way when I went to peruse new frames at a beloved Seattle glasses shop this fall. I had brought along one of my favorite old pairs, a moderately-sized bronze rectangular frame by JLO, the eponymous eyewear company launched by Jennifer Lopez in the early 00’s. (J.Lo: ahead of her time!) I wore those glasses into the ground, insisting on perching them on my nose until they were chipped and two prescriptions behind.

“Do you have anything like this?” I asked the salesperson hopefully. “I don’t want anything too big.”

“Oh honey,” he replied, gently folding up my JLO’s and placing them respectfully back in their case. “No one makes glasses this small anymore.”

Thus began my introduction to the oversized glasses phenomenon, with huge cat-eye frames, aviators, rounded shapes, and more showing up on the faces of celebs, students, and everyone in between. Eyewear websites now offer helpful tips on “How to Rock Oversized Frames If You Have a Petite Face” and trace the trend’s history back to Andy Warhol and Kurt Cobain. I recently sat down to watch Melissa McCarthy on PBS’s “Finding Your Roots,” and lo and behold, she donned a chicly gigantic pair of glasses to scrutinize the archival family documents put before her. These glasses are quite literally spectacular, carved from some sort of clear yet glowing lunar material and perfectly showcasing the actress’s bright green eyes.

I wish cultural influencers like Wong, McCarthy, and their large-glasses followers had been around when I was a kid. I got my first pair of glasses in second grade, something in an inoffensive neutral color, but by fifth grade I was wearing an extremely big plastic pair that reached halfway down my face, with pink angled flourishes on top.

Just why did my 10-year-old self make this bold choice? I’m thinking it’s probably because there were just not a lot of options for kids’ glasses in the 1980s, especially not compared to the huge variety of cute frames available today. Facing my sentence of nearsightedness and astigmatism, I went with my mom to the For Eyes store in Richmond, Virginia, and did my best.

The fact of wearing glasses influenced my childhood identity and self-perception to a huge degree. In an entry for the Young Authors writing contest, I introduced my story’s first-person narrator by saying, “Two pink plastic lenses frame my world.” (Apparently my younger self had already figured out that writing autobiographically was a thing one could do and enjoy.) I don’t recall ever being called “four eyes,” that classic takedown of a bespectacled kid, but I definitely felt different and less cool because of my glasses. It didn’t help matters socially that I wasn’t allowed to attend cotillion, the formal Southern dance classes that most kids at my middle school attended on Friday nights. Instead of carpooling and hanging out at Friendly’s afterwards, like “everyone” did, I stayed home for Shabbat dinner. I loved that time with my family, but it also reminded me that being Jewish means sometimes feeling different, being on the outside looking in. And there were no corrective lenses for that.

As I excelled academically, competing in local spelling bees, national Latin competitions, and quiz bowls, my glasses seemed to confirm the bookish perception others had of me. By high school I had begun wearing contact lenses, but there was always a part of me that recalled — still recalls — the big pink glasses and how it felt to view the world and be viewed that way. It was in Israel, during a college semester abroad at the University of Haifa, that I returned to glasses at last. My contacts couldn’t handle the dusty air, so I ventured to the campus optician and bought myself a pair of glasses. With that sassy semi-rimless frame by Keds, the ultra-American sneaker brand, I finally embraced my heritage of poor eyesight and have never looked back.

Fast forward to today, when my 10-year-old son decided to wear a pair of fake fashion frames, a prop from a cousin’s bar mitzvah, to school this morning. “They look cool!” he declared, tilting his head as he gazed in the mirror. He is in fifth grade now, and so far has escaped the nearsighted prescription that both his parents had received by that age. And through a quirk of fashion fate, huge glasses are now in, so very in. From Kate Hudson to Jay-Z to Gigi Hadid (who just designed a collection for Vogue Eyewear), large glasses are visible everywhere, their omnipresence suggesting the opposite of what I thought as a child: Rather than something to hide behind, eyewear is now empowering, allowing us to be as fearless, smart, and funny as Ali Wong delivering a trademark zinger about breastfeeding.

I wish I could go back to my elementary-school self and tell her that, just maybe, she actually set the trend. That huge glasses are now a signifier of cool, not a reason to shirk. That one day, her 40-year-old mom self would sit down at a hip eyewear store in Seattle and pick out a pair of really big glasses. They reach halfway down my face, with red angled flourishes on top. They are beautiful, and my kids love them.