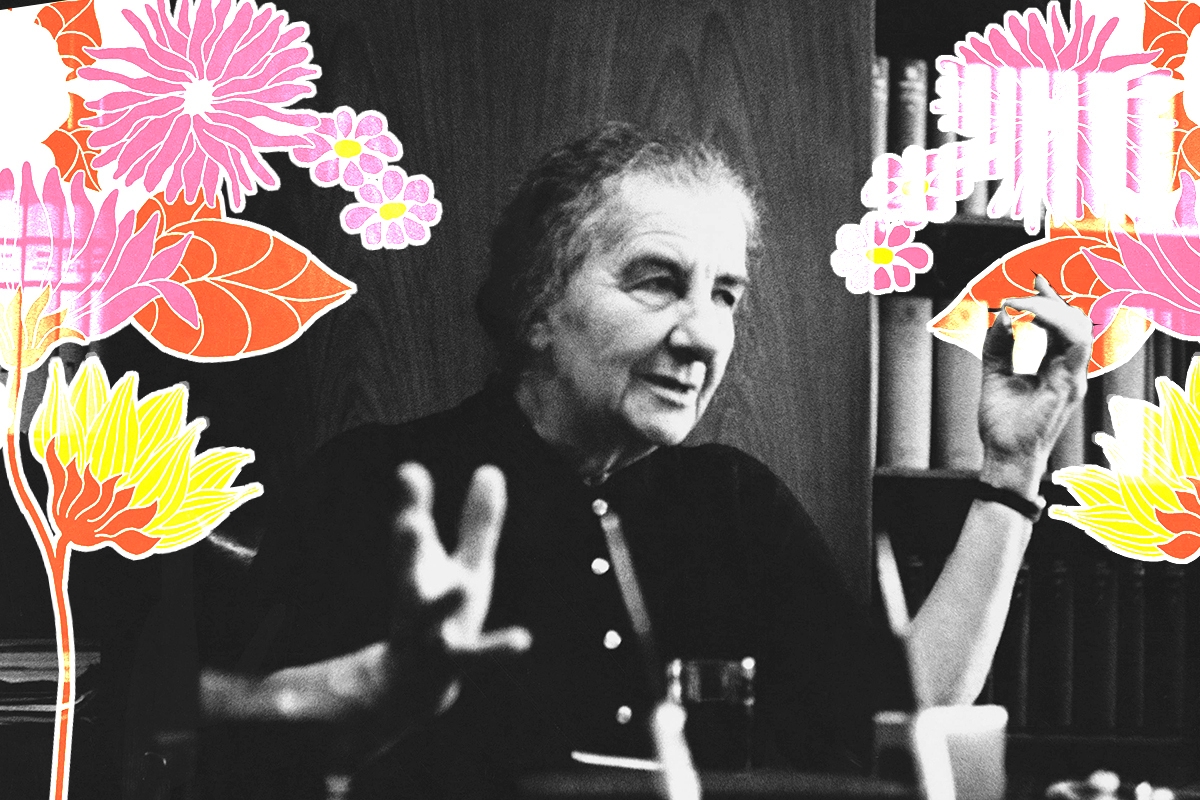 How terrible, I thought, when I learned the Capitol had been stormed by a mob. How could this happen in our country? And yet, when I consider the election itself — how the record number of women will serve in Congress, and how Kamala Harris will soon be our new Vice President —  I’m flying high. What an exciting time this is for women! Thinking of all these incredible women have accomplished has me thinking about another triumph 50 years ago, when Golda Meir stormed Israel’s all-boys’ club, and became that country’s fourth prime minister.

Meir was a teacher, a kibbutznik, and a fundraiser extraordinaire — in a single speech in 1948, she raised $50 million from American Jews to equip Israel’s armed forces, which helped make the State of Israel a reality. She was also a risk-taker and rule breaker, a balabusta with the head-on drive of a bull, who put the lie to what then was considered a “woman’s job.” Politics? Women need not apply. But as Ol’ Blue Eyes never said: She did it her way.

Remember back in the ’90s when then First Lady Hillary Clinton defended her law career to the press? It wasn’t for her to stay home, bake cookies, and have tea. She got a lot of flak for that from women who had stayed home and raised their pinkies high, as well as from all those moms raising families — the toughest job in the world — who wished they had time to whip up cookies from scratch amidst the chaos of parenthood.

It probably didn’t occur to Clinton that Meir had, in fact, baked and served tea — apparently she liked hers with salt instead of sugar — and ran the nation of Israel. At times in an apron, around her kitchen table, she conferred with advisers and world leaders while dishing out slices of apple strudel. It wasn’t either/or for Meir. She was domestic without apology and a steely politician.

She gave short shrift to what was expected of a wife and mother. And yet, despite all her power she doubted herself (et tu, Golda? Will we ever cut that out?) and worried she was not pretty enough for her husband, Morris, according to Golda Meir: The Romantic Years by Ralph G. Martin. For months at time, she didn’t see her son and daughter. Sometimes she wasn’t even in the same country as they.

Addressing a National Hadassah Convention in the 1950s, she talked poignantly about the choices she’d made. “Is there something wrong with me because my children don’t fill up my life?” she asked the assembled.

Meir’s husband — her shy, quiet opposite — was more suited to parenting. This very 21st-century, “Mr. Mom” arrangement was unusual in Israel’s patriarchal society. If a Jewish woman worked then it was because she had to, not because she wanted to. Jewish men were proud of their non-working wives; it reflected back on them what good providers they were.

Morris cared for Menachem and Sara, who were little more than toddlers when she became an official of the Zionist Histadrut Trade Union in 1928 and, soon after, an emissary in the United States for the HeHalutz women’s organization. The children were in their 40s when Meir became Prime Minister in 1969, after she had served as Foreign Minister, having held government office since the 1930s.

Meir loved the challenge and the fight. Perhaps more than anything, she loved the work, proving herself in a man’s world. Ahead of her time in many ways, she took on the privileges of that world  — including taking lovers without apology.

Surprised? Come sit by me. She of sturdy legs and orthopedic shoes, offhand about her appearance, was apparently a magnet for men back in the day. Allegedly she had a fling with a high-born Palestinian Arab. An affair with the director of the UJA? Hearsay and unproven rumors. But love letters between Golda and David Ramez (a signee of the Israeli Declaration of Independence), revealed an intimate relationship.

Pioneers in Palestine at the Merhavia Kibbutz in 1921, she and Morris lived there early in their marriage. It was a perfect setting for her driving energy and open personality; not so for Morris who couldn’t take the rugged communal life and went back to live in Tel Aviv. Looking back on those days, “I was no nun,” she said.

Although she lived most of her life in Israel, she was born in Kiev and educated in the United States. There was fire in her from the start. A leader early on, while still in grade school in Milwaukee, she organized a fundraiser to pay for her classmates’ textbooks. In high school, she attended debates on Zionism, women’s suffrage, and trade unions. She credited “those talk-filled nights” as playing a considerable role in shaping her convictions.

A complex woman with inner struggles, Meir, like all of us, had flaws. But it’s because of those flaws and struggles that I admire her. Had she been devoted to her children and a faithful wife as well as a first-rate politician, savvy negotiator, and champion fundraiser, she would have been perfect. For any of us who have ever tried perfect… well, we tried and we failed. Perfect is a myth. How do you admire a myth?

Meir, however, was a deeply human individual who raised the bar on what was possible — not only for Jewish women, but for all women. She showed us that the choices we make aren’t limited to the choices we’re given. We can become who we want to be.

Now, we’re just one day away from having not only a woman, but a barrier-smashing Black and Asian American woman become the vice president of the United States. (Harris, of course, has had an impressive legal and political career — and she knows her way around the kitchen to boot.) We’ve come a long way, baby!  Maybe next, God willing, will be a Jewish woman in the White House — and she won’t be there to make the beds and cook the meals. She’ll be a pioneer like Meir, heading up the whole she-bang!