Diverse Jewish TV Shows and Movies to Watch With Your Family 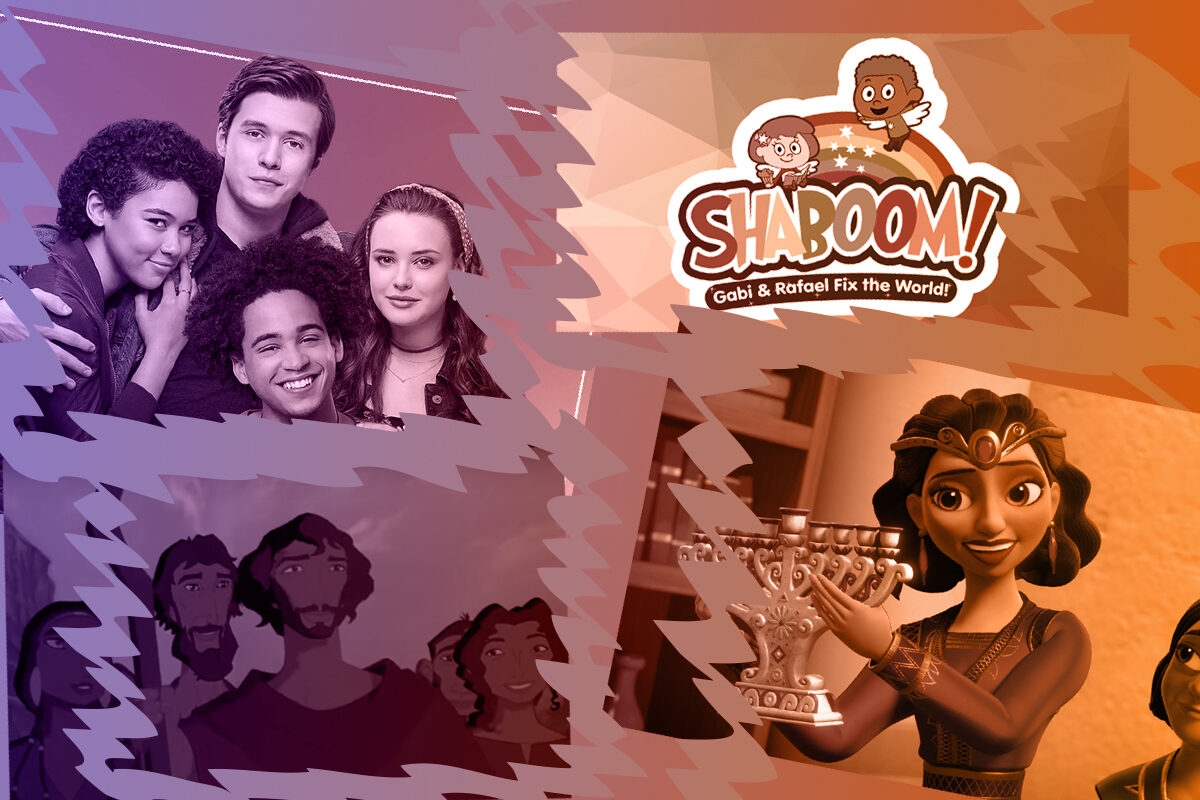 Last week, Kveller published an anti-racist reading list for Jewish families. As I wrote, there still needs to be so much more representation of People of Color in Jewish kids’ books, there’s fortunately still quite a bit of material for families to work with.

The same can’t really be said for representation of Jews of Color on TV. This list here is a little, eh, barebones. Let’s face it — there isn’t that much great Jewish representation is children’s TV, period, and representation beyond white-presenting Ashkenazi Jews is even harder to find.

Still, as so many of us are at home right now, a lot of you are watching a lot of TV with your kids. (Honestly, same.) So here’s a list what’s out there, in hopes of manifesting even more.

The two little Jewish sprites that host Shaboom‘s animated Jewish videos are Gabi and Raphael, a purple-haired white girl and a blue-haired Black boy. It’s a delight to have this whimsical and magical animated cast lead us through Jewish folktales and the stories of Jewish holidays.

This Israeli TV show features a diverse set of Jewish faces. While the show, which dates to the ’80s and ’90s, isn’t the most PC of them all by 2020 standards, it still shows that Jews are not all white, with both Ashkenazi and Sephardic hosts. I’m especially fond of the Passover episode, which shows Ethiopian Jewish holiday traditions. (In Hebrew.)

One of the hosts of the 2011 season of Shalom Sesame is Ayala Ingedashet, an incredible Ethiopian Israeli singer and actress. She’ll win over you and your kids while interacting with the idyllic’s street Israeli and American puppets, like Grover and Abigail.

Last year, Elena of Avalor introduced Disney’s first Jewish princess, just in time for Hanukkah. What’s more, she was a Latina Jewish princess! While some viewers complained that what Princess Rebecca presented was a bit of a mish-mash of Sephardic and Ashkenazi traditions, showing a Jewish Latina princess was still an important first step towards more diverse Jewish representation, according to Ladino scholar Sarah Aroeste.

The Prince of Egypt (Hulu)

In a quietly revolutionary — and, let’s face it, historically accurate — way, The Prince of Egypt rejected the common practice of making biblical characters white, despite the fact that, you know, they lived in the Middle East. Instead, DreamWorks gave us a brown-skinned Moses, Aaron, Miriam, and Tziporah. The movie even features the voice of Mizrahi singing legend Ofra Haza. Another win for representation!

A Jewish Incan character?! Yes, please! That’s right, Kronk, from the Emperor’s New Groove, is a member of the tribe. In a wedding ceremony in this direct-to-video movie from 2005, the emperor’s loyal sidekick breaks the glass, as per Jewish tradition.

Phineas and Ferb’s delightful neighbor, Isabella Garcia-Shapiro, is a Latina Jew! Her mom runs a Jewish-Mexican restaurant called Nosh Ole, and is full of Yiddishisms (and since many Mexican Jews are Ashkenazi, this checks out). One episode features a Mexican-Jewish cultural festival which is delightfully ridiculous. (Kreplach on tostadas?! We’ll try it!) Yes, Isabella is a white-presenting Jew, but it’s nice to see her mixed Latin and Jewish heritage!

This delightful film, directed by Greg Berlanti — who incidentally, is raising his kids Jewish, despite the fact that he is not — features a Black Jewish character. We won’t spoil who they are, because, well, that’s an important part of the movie, but to see a Black character celebrate Hanukkah in a mainstream American movie is truly a joy.