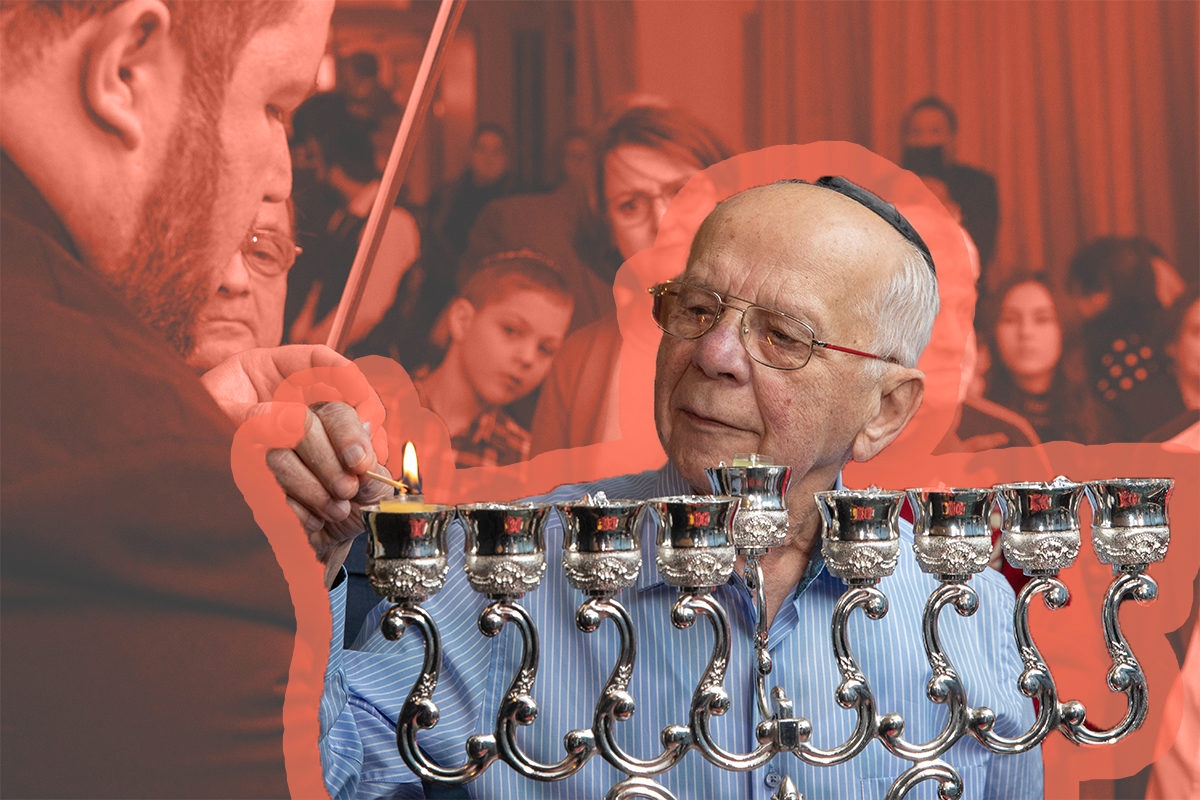 Nearly 1,000 Holocaust survivors lit candles at public menorahs in cities across the globe to commemorate the Festival of Lights.

As anti-Semitism continues to spike around the world, Jewish community leaders are worried that younger generations are forgetting the horrors of the Holocaust. To keep the difficult memories alive and to honor living survivors’ sacrifices, the Conference on Jewish Material Claims Against Germany organized the third annual International Holocaust Survivor’s night with several global Hanukkah lighting ceremonies.

Greg Schneider, the executive vice president of the Claims Conference, said in a press release that Hanukkah is the perfect time to honor Holocaust survivors. “Survivors serve as lights for the rest of us, inspiring us with their resilience and reminding us of the importance of remembrance,” he said.

On December 22, the first night of Hanukkah, some 600 survivors joined their Jewish communities in New York City, Munich, and Moscow to discuss the importance of Holocaust education, perseverance, and to light candles and rejoice.

In Moscow, 86-year-old survivor Mikhail Spektr held hands with a rabbi as he lit the first  candle. Afterwards, he sang songs with the Russian Jewish community, accompanied with a fiddler and accordion player.

Spektr recalled, as a child, his grandfather telling him hat Russia was “a civilized nation, they wouldn’t do anything to us,” the AP reports.

But in 1941, his family was forced into a ghetto in Ukraine. They remained there until the Red Army liberated him and the rest of the prisoners three years later.

Around 300 survivors gathered a the Museum of Jewish Heritage on Sunday to listen to several speakers and an a cappella group which performed Hanukkah songs.

In Munich, Charlotte Knobloch, the president of the Jewish Community of Munich and Upper Bavaria, spoke of the “increasingly difficult task” of “keeping the memory of the Holocaust alive.”

“If we light this year’s Hanukkah candle in Munich, there will be another light that reminds us that the darkness will never prevail,” Knobloch said, according to DW reports.

Some 70 survivors also gathered in Bremen, Germany for a service led by Elvira Noa, chair of the Bremen community.

About 400,000 Holocaust survivors are still alive, and half of them reside in Israel. Shockingly, around 40 percent are living in poverty, according to a press release. For that reason, the lighting ceremony was public in an effort to encourage others to help struggling survivors.

The celebration continued on the second night of Hanukkah, when some 100 Holocaust survivors joined together at the Western Wall in Jerusalem. The tone quickly went from somber to joyous when the group danced in circles celebrating the holiday.

For survivor Amnon Elkiev, Hanukkah is a holiday of victory. “It’s very important for me to see the light of victory,” he said.

At the Kotel, Claims Conference CEO Shlomo Gur compared the victory of the Maccabees against the Syrians to the Holocaust survivors against the Nazis. He spoke of the lengths Jews went through to celebrate Hanukkah during the Holocaust, and honored them as heroes who are “living proof of this victory.”

“Some have used tiny drops of margarine sparsely given to them as food, to form tiny candles in which threads taken from their crumbling clothes was used as a wick,” Gur said. “This holiday gave Jews a lot of strength needed to get through the inferno they were in.”

France’s chief rabbi Haim Korsia compared the crowd of survivors in Paris to a lit Hanukkah candle that will never be put out: “When we transmit the knowledge, your experience, and when we transmit it to others, it takes nothing from us and it gives to others.”

“We are doing everything while we are living so that [the memory] remains,” Bakon said.