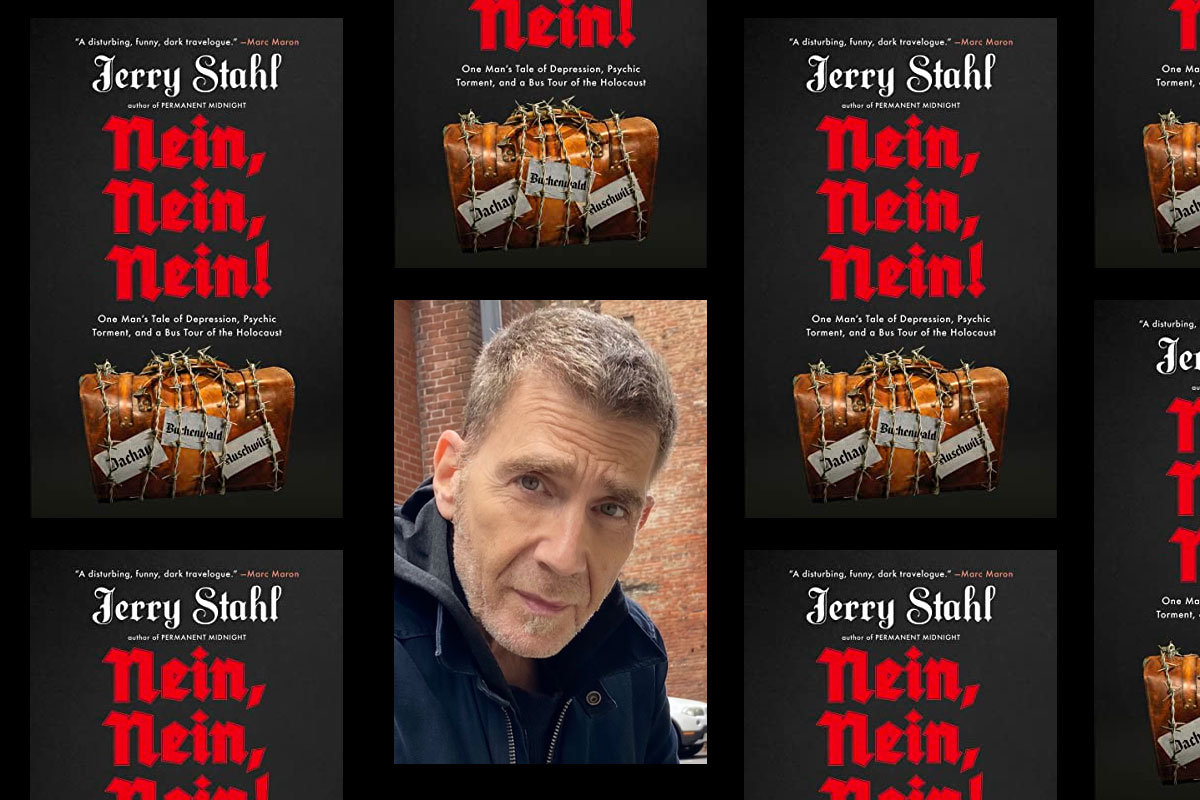 Occasionally you find an author whose work is so riveting you never want to put it down. Such is the case with Jerry Stahl – his disruptive fiction proves what a national treasure he is.

Known for his 1995 bestselling memoir of drug addiction, “Permanent Midnight,” which was adapted into a 1998 film starring Ben Stiller, Stahl has worked for years in film (“Bad Boys II”) and television (“Hemingway & Gellhorn,” “CSI” and “Escape at Dannemora,” for which he received an Emmy nomination). The author of 10 books (“Perv: A Love Story,” “I Fatty”), his journalism has appeared in Esquire, the New York Times and a variety of other publications.

In a world where antisemitism is on the rise, Stahl’s latest book, “Nein, Nein, Nein!: One Man’s Tale of Depression, Psychic Torment, and a Bus Tour of the Holocaust,” becomes even more of an important read.

“I was in a dark place with my depression and I wanted to find a place that would match that level of despair. There was no place more appropriate to visit,” Stahl told Kveller.com.

On Being a Parent

The trip allowed Stahl to confront his own personal and historical demons with two dozen strangers on the bus tour, examining his own failures as a father.

“For me, all parenthood, on some level, is an endless contemplation of things that can go wrong. Whether catastrophizing exists as some epigenetic Jewish trait, instilled in the DNA after generations of torment, abuse, and state-sponsored terror – or it’s sprung up in response to the ‘Jews Will Not Replace’ us madness unleashed since our white nationalist president told the Proud Boys to ‘stand by,’ my fear for the world my children will inherit has never been greater. That so much of America, essentially now buys into the racist, bigotry-soaked rantings of today’s Joseph Goebbels may be the most terrifying truth of all. We love to say, ‘Never Again.’ Maybe, after the Tree of Life slayings, it’s time to modify that sentiment to ‘Until Now.’”

Stahl lost his father to suicide when he was just a teenager.

“My theory of parenthood is pretty simple. You try to fuck your children up the opposite of how they fucked up you, and hope things land in the middle. At a minimum, one promise I made myself is that I would never, to the best of my ability, inflict my mental health issues (i.e. depression, neurosis, narcissism, etc.) onto my kids. Life is hard enough without forcing your offspring to deal with your own psycho-emotional failings.”

He continued: “I loved my father – though in retrospect, he left this earth before I really got to know him. And I am not sure, for that matter, that he got to know me. But what memories I have are the ones I hang onto.”

Given that history, there is nothing more important to Stahl’s world than his children.

“Whether they live in the same city or a thousand miles away, that contact, and that love – the non-stop demonstration of concern, and care, and genuine interest – stands out as a primary focus of my own life.”

Stahl remains grateful for his powerful two week experience, because it brought him a newfound appreciation for fatherhood.

“It is impossible not to project your own family into the brutal history you confront at the camps,” he said.

“Think about what happened… and try to imagine anything more horrifying than having your child deliberately ripped from your arms. To see their little tiny shoes was so heartbreaking. It made me feel even more lucky to be a father; it’s an absolute miracle to bring a child into this world.”

While he is not a practicing Jew, Stahl has a strong connection to the culture; loving the distinctive voice and spirit of Jewish writers and comedians for as long as he can remember.

“It’s hard to imagine a world without Lenny Bruce, and Oscar Levant and Joan Rivers and… [he continues]. Too many genius talkers and thinkers and straight-up tummlers to remember in one place. Without them, the world would be a far drearier place. And – whether Jew or non-Jew – you wouldn’t want to live in it.”

Stahl’s experience taught him that, practicing or not, Jews are Jews.

“Writing this book, which took me to the historically Jew-killing countries, the feeling was inescapable. Reform or Orthodox, Conservative or bagels-and-lox, whatever kind of Jew you are, when the knock comes at three in the morning, when you’re dragged out and thrown on the train, it does not matter whether you’ve rigorously celebrated Shabbos, or last set foot in a synagogue two decades ago at your great-uncle’s funeral. The monsters who hate Jews don’t care what kind of Jew you are. And neither did the ovens. End of story.”

Despite this confronting realization, Stahl’s been ongoingly comforted by Judaism’s resilience.

“One of the most inspiring, and undeniable truths about Judaism is that, no matter what, it somehow endures. How many cultures, through the millennia, how many people on the planet have come and gone? Call it the Jews’ Revenge. The thousand year Reich, to name but one, came and went in twelve years. (Discounting, of course, the random Hitler fans whose fuhrer-love has morphed into lust for Donald Trump.) Even with the ever-swelling ranks of American and global Nazis, it’s safe to say there are, for now, still more Jews left in the world than white nationalist fascists and fundamentalists who want them dead. Though who knows how long we have before the ax[e] falls again.”

One only has to look at a newspaper to see that it’s not a matter of if the Holocaust could happen again, it’s a matter of when.

“It’s happening right now in the Ukraine. For the Yemenis it’s happening in Yemen. For the Somalis, in Somalia. Or you could talk about the slow-motion genocide of death by global warming, by environmental pollution… choose your poison,” he said, wearily.

“All one can do, as a writer, is chronicle the internal effect of the external savagery.”