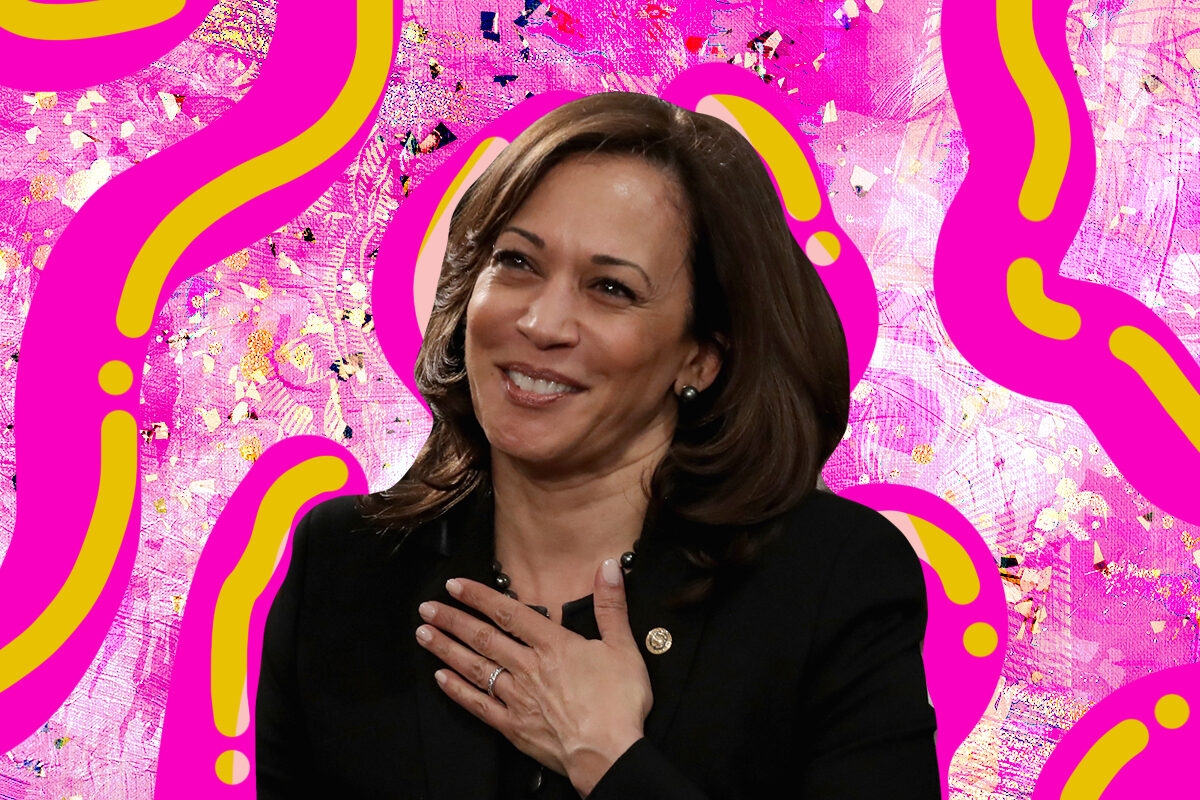 By now, you’ve probably read the pieces about “Kamala the Momala.” After all, Democratic Vice Presidential candidate Kamala Harris isn’t just a California senator and former prosecutor — she’s also a stepmom to two apparently lovely kids, Cole and Ella, from her apparently lovely Jewish husband’s first marriage. The kids call her “Momala,” which, to me, is everything: it’s Yiddish-inflected, it rhymes with her actual first name, and it is the most adorable thing I’ve heard in awhile. (I mean, at least since hearing Harris’s spot-on imitation of her Jewish mother-in-law.)

Regardless of your politics (who am I kidding? sigh), I’m going to make the following unassailable, watertight argument: Kamala Harris’s Big Stepparent Energy is exactly what we need one heartbeat away from the presidency. And I know this for a fact because I have been the fortunate beneficiary of Big Stepparent Energy from my own husband, who went from being a divorced guy in the city who’d never had kids, to a married stepdad to two kids under 6, to a father of 6 kids in total.

Despite what you may have learned growing up, being a stepparent isn’t just about making kids your in-home slaves (Cinderella), or attempting to feed them poison apples (Snow White), or trying to lose them in the forest (Hansel and Gretel). In fact, the vast majority of stepparents (who aren’t sociopaths, that is) are faced with an almost impossible situation. Becoming a stepparent is a delicate dynamic: You’re coming into an already-made parent-kid relationship, and you have to find a place for yourself in these kids’ lives and hearts. And even if I haven’t done it myself, I can say, after close observation, it is not easy. Those who thrive at stepparenting are truly exceptional people.

I think the success of people like Harris (and my own husband!) at their stepparent relationships demonstrates some important character traits. These qualities of resilience, flexibility, and the like are also necessary in many other stressful situations — including a successful navigation of a President-Vice President relationship, as well as helping to, you know, run a country. I’m here for the Big Momala Energy — and here’s why you should be, too!

Know before whom you stand.

You know that feeling of, “This isn’t what I signed up for?” That one you’ve been feeling since the beginning of this pandemic? Well, think back to when you were a kid, when you imagined one day falling in love and getting married. You probably didn’t imagine falling in love with someone who had kids from a previous relationship.

When my husband Jon and I met 11 years ago, I had two boys who were then 6 and 4 years old. He’d never dated someone who had kids. We had both been divorced, so both of us knew that things don’t always go as you’d planned or imagined; and while Jon had wanted to have kids, he never had.

He also knew that my boys were everything to me. “I know you’re into me,” I told him. “But I come with baggage.” When he told me that my kids were “the Louis Vuitton of baggage,” I really fell inextricably in love with him and my fate was sealed.

Harris has written about meeting her future stepchildren: “As a child of divorce, I knew how hard it could be when your parents start to date other people. And I was determined not to insert myself in their lives until Doug and I had established we were in this for the long haul. Children need consistency; I didn’t want to insert myself into their lives as a temporary fixture because I didn’t want to disappoint them. There’s nothing worse than disappointing a child. So, we took it slow, and Doug and I put a lot of thought into when and how I would first meet the kids. And that meant waiting.”

This is harder than it sounds. When you’re in love, you want to share everything you have with the person you love — and nothing more than the people you love. I love how Harris widened the lens of her own experience to be empathetic to her future husband’s children. She didn’t want to screw around with their feelings.

Obviously, the concerns about meeting older children (Harris’s future stepchildren were teens) as opposed to younger ones are different. But that sense of caution and deference — making sure to tread lightly with something so precious — is the same. And if Harris enters the administration in 2021 as Vice President, I’m confident that she will be similarly respectful to the institutions of our democracy. If we’ve learned anything over the past three-plus years, it’s that our democracy is sadly fragile. But I trust Harris to know the importance of the office in which she sits, and her responsibility to future generations.

Be flexible and open.

For Jon, there was, very definitely, a learning curve to becoming a stepdad. After all, he had to learn everything parent-y on the job, from the logistics of the Tooth Fairy to the best methods for cleaning up vomit. And while we all have to learn by doing as parents, when you’re dropped right into the thick of things, it’s a bit harder.

One of the first times the four of us went out to eat together, we got all of our food and Jon started eating. But then, out of the side of his mouth, he said to me, “Why aren’t they eating? Why are they just looking at me?” That was when I told him that part of our parent and parent-adjacent responsibilities included cutting their food for them. Shortly thereafter, when we went on our first vacation together, Jon learned that taking young kids on a trip sometimes means that, instead of spending the evening exploring a new city, you get to order room service and watch Fantastic Mr. Fox in the hotel room.

When you’re a parent, you can’t be inflexible — but becoming a stepparent means emotional hyperelasticity. Becoming a stepparent is immersive. One second, Jon was living the life, reading the Sunday New York Times over coffee after waking up at 10 a.m., and the next, he had two small boys waking him up at 6 a.m., regardless of the day of the week, demanding that he play Kinect Sports with them.

Both Harris and my husband went from situations where they could prioritize themselves to situations that demanded that they prioritize others. As a stepparent, you’re coming into a situation where pre-made people have pre-made wants, needs, concerns, and fears — and you, as the adult in their life, have to go out of your emotional and physical way to show that you have room for them.

Flexibility is a trait every leader needs. It’s not “my way or the highway,” unless you’re an aspiring dictator… but I digress. As a stepparent, you need to be able to read the room, sense the dynamic and needs on the ground, and jump right into the ever-changing mix. I know Jon’s been successful at that. Harris has done it with finesse and grace in her home, too, and I believe those skills will prove invaluable as Vice President.

Never try to make yourself look better by taking someone else down.

When you’re a stepparent, there is already someone out there who holds the role of “Mom” or “Dad.” You may like that person or you may not like that person. But stepping on those toes isn’t going to do anyone any favors.

In my mind, Harris has already proven herself a diplomat par excellence — and arguably a truly extraordinary human being – with the following words: “To know Cole and Ella is to know that their mother Kerstin is an incredible mother. Kerstin and I hit it off ourselves and are dear friends. She and I became a duo of cheerleaders in the bleachers at Ella’s swim meets and basketball games, often to Ella’s embarrassment. We sometimes joke that our modern family is almost a little too functional.”

My personal family is not as magnificently conflict-free as the Harris-Emhoff clan (#goals). That being said, Jon would never trash-talk my boys’ father — he’s their dad, period. In life, when you are secure in your role, there is no need to take someone else down to attempt to gain footing for yourself.

There’s enough love to go around.

In our family, we don’t use the words “stepdad” or “stepmom,” or the lingo of “half” siblings. In fact, if you asked my kids about any of those things, the younger ones would not have any idea what you were talking about.

That’s because it only took us a little while into our life together to learn that love isn’t dispensed in halves or steps, and that calling it those names seems disrespectful. Instead, love floods the zone. Love is in all the things we do for one another, as well as the regrets we feel when we misstep. There’s no partial loving: When we love, we love completely.

In a time of rampant national dysfunction, let’s all take a lesson from the Harris-Emhoff family. Their family is not cookie-cutter, it’s not predictable, it’s not one-size-fits-all — and yet, it works because it’s brought together by conviction, caring, and love. I hope our nation will be, too.