I Couldn’t Find Kids’ Books That Reflected My Black Jewish Family. So I Published My Own. – Kveller
Skip to Content Skip to Footer

I Couldn’t Find Kids’ Books That Reflected My Black Jewish Family. So I Published My Own. 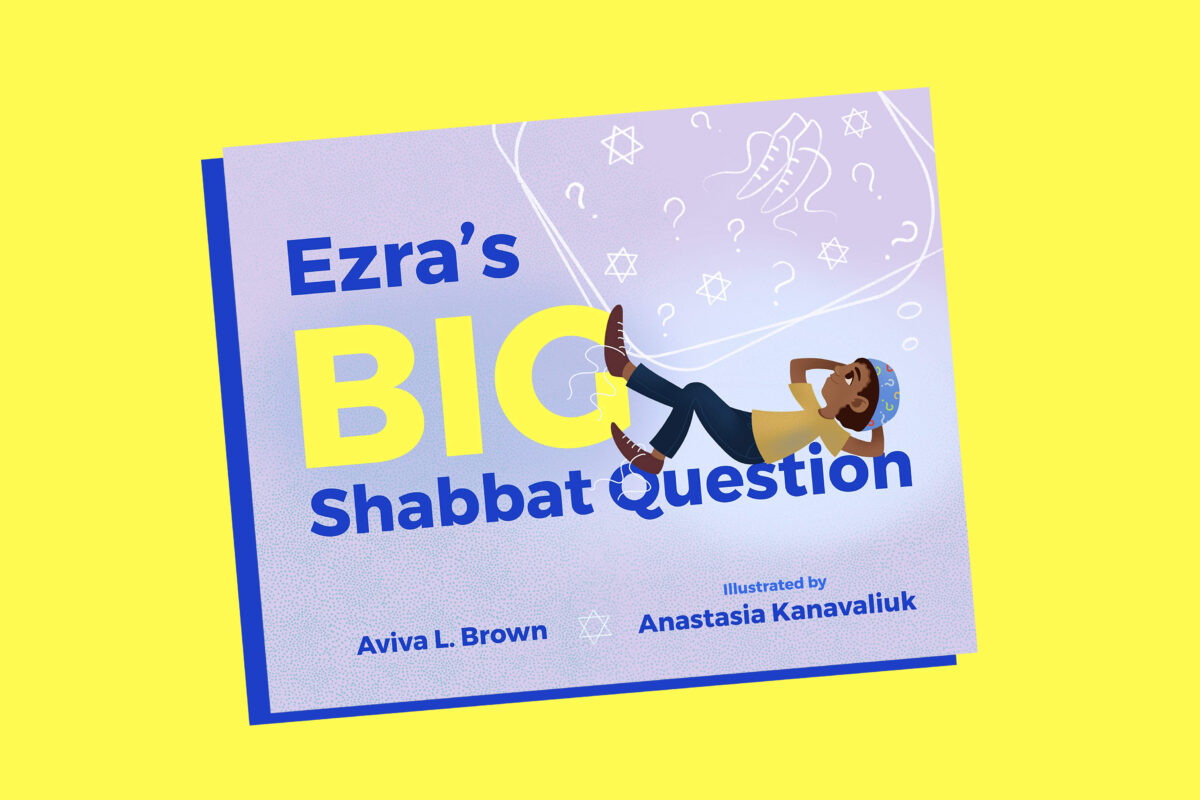 As a millennial mama, I’m obligated to have multiple adjectives and nouns to describe my self-identity. The words I choose quickly give people a snapshot of my life: Black, Jewish, American, woman. I’m also a wife, stay-at-home mother of four, and North Carolina’s Mother of the Year 2020.

Another identifier that I never expected to claim? Published author of the children’s book Ezra’s BIG Shabbat Question. Yet, here I am.

Here’s how it happened. My not-so-little biracial family converted to Judaism several years ago (with one straggler — my spouse, who waited until 2019) and our Jewishness anchors us as a family. Amidst the love of our community and the rhythm of Jewish life, something niggled at the back of my mind, a little fly buzzing in an otherwise sweet ointment. I knew something was slightly out of place, but I just couldn’t give the little fly a name.

After our last child arrived, I finally had the energy (if not exactly the desire) to do some housework. One day, as I was picking up the Jewish children’s books that were scattered around our home, that nameless, niggling little fly flew onto the main stage of my brain like a pop starlet: I realized that the large stack of books we’d been using to help bring our kids to Judaism had no characters that looked like us.

Our family is a spectrum that runs from fair-skinned to dark-skinned, white to biracial to Black. Our rabbis teach that Jews come in many colors — our family certainly does. But where were we in the books on our shelves? I couldn’t find us or anyone like us. So I did what any sane, reasonable mother of four (including an 8-week-old) would do: I decided to write a book myself.

I’m sure that sounds unreasonable, but it’s how my life works — I have a ridiculous idea, I pursue it on a whim, and then, disaster. Sometimes, though? Sometimes there’s success and, thankfully, that’s what happened in this case.

Of course, deciding to write a book was the easy-peasy part. Deciding what to write? Not so much. Approximately one week later, though, while in the shower, the idea for Ezra’s BIG Shabbat Question came to me: I’d write about my family, and my second son, then 8, would be the main character.

Why write a book about an inconsequential question — whether or not you can tie a knot on Shabbat — that looms large to Ezra but doesn’t register for anyone else? Simply because that is real life with my son. Yes, all children ask a lot of questions, but my son has High-Functioning Autism Spectrum Disorder. He fixates about the minutiae of… whatever has his attention this week, and he hyper-focuses on knowing even the tiniest details about his subject. Interestingly, many readers have picked up small but important details and silly jokes, yet since the book was published last summer, no one has mentioned the idea that Ezra is or might be on the spectrum.

Writing for children can be a struggle, especially in the picture book genre. A story needs to appeal both to the adults who will buy the book and to the kids who will read it. A story has to WOW and it needs to do so in fewer than 600 words.

Fortunately for me, I do not struggle. Words spill from my brain like Manischewitz at Passover. Then, against nearly all advice, I edit my own work. I take an old-school red pen to the manuscript. I cut entire scenes. I reworked Ezra’s story into fewer, more compelling words. Round after round of edits, four in all, until every word was necessary and nothing more could be cut.

Then, I made another sane, reasonable choice to self-publish my book. There are several reasons for this decision, including that the children’s book market is nearly impossible to break into with traditional publishing houses. Also, I’m impatient, and I knew I could release the book more quickly if I did it myself, and finally, I have diagnosed Obsessive Compulsive Disorder and I couldn’t fathom giving someone else creative control over my son’s story.

Self-publishing has a steep learning curve. How do you actually produce a finished book? How do you hire an illustrator? What type of printing will you use, on-demand or offset in large quantities like the publishing houses? How do you market your book? Build an audience? Sell on Amazon? Copyright your work? Starting out, I had no clue, so I flew by the seat of my pants until I did. In this one instance, having OCD was a help, not a hindrance.

The new baby was helpful, too. Sleepless nights spent feeding, burping, and soothing were combined with researching different methods of printing, learning about copyrights, working with my illustrator — Anastasia Kanavaliuk, an art student in Belarus — and going over every small detail repeatedly until it was correct. I know where my son gets his laser focus.

I originally planned to print 250 copies — for my mother, my friends, and maybe my local Jewish community. I spoke with another self-published author and bluntly asked how many copies her book had sold — at that time, 500. Wow! I decided that if I hustled enough, I could sell that many, too.

I got price estimates for printing Ezra’s BIG Shabbat Question in hardcover at an offset printer in China. Printing 1,000 copies cost nearly the same as 500, so I ordered 1,000 copies of a book that I could only guarantee my mother would purchase.

Oy — 1,000 books. How on earth was I going to sell a niche book about a dark-skinned, biracial, Jewish child to 1,000 people? I just knew that this whim was destined for disaster.

My spouse and I talked it over, calculating how many copies I needed to sell to break even. He told me, “Once you sell that number, I don’t care if the rest of the books sit in the attic and collect dust. I’m just proud of you, and I can’t wait to see you hold your book in your hands. It didn’t exist, and now it will be out in the world because of you.” He’s a real keeper.

Ezra’s BIG Shabbat Question was released July 31, 2019. Nine months after writing my first draft, I held printed copies in my hands. I don’t think it’s a coincidence that birthing a “book baby” took me nearly as long as gestating a human.

Thanks to a well-connected friend, my local newspaper did a profile about my book and my story. It was shared hundreds of times in Jewish circles all over the world. Orders came pouring in and we filled them just as quickly.

I was ecstatic and overwhelmed by the response. While I focused on creating a book that allowed my children to see Jews like themselves — in fact, Jews that are fictionalized versions of themselves — a simple truth escaped me: If my family needed this book, other families needed it, too.

Since release day, orders for Ezra’s BIG Shabbat Question have ebbed and flowed. Some months I sell dozens of copies, others less than five. In the weeks since George Floyd died in police custody in Minneapolis, civil unrest has broken out nationwide and I’ve seen my largest sales spike to date. It has stirred mixed emotions in me — my profile is rising and I’m receiving new opportunities because one of my brethren died horrifically. The anxiety, guilt, and emotional paralysis has kept me in bed more than a few days recently.

I spoke to the real-life Rabbi Andy, who is a featured character in Ezra’s BIG Shabbat Question, and his calming influence, knowledge of my personality, and general goodness helped me create an action plan. First, during the events I’m being invited to participate in — such as invitations to guest on podcasts, or be interviewed, or be a panelist in a diversity in Jewish literature discussion — I will openly discuss the conflicting emotions that experiencing success in this moment brings. Second, I can discuss the Jewish value of tzedakah, or righteous giving — and I will donate 15% of the proceeds from my June sales to an organization working for racial and social justice.

Fortunately, writing and publishing a children’s book about my Jewish family of Color has not been a disaster (whew!) — I’ve connected online with other Jews of Color and we’ve shared our stories. I’ve learned that I’m not unique in my experiences as a JOC, though each of our collective stories are our own. I’ve gained new skills, like starting my own small business and mastering toddler-level website design. I’ve grown as a writer, and grown in the way I think about and express my intersectional identity. Perhaps most important, I’m finally ready to accept new facets of my self-identity: children’s author, diversity advocate, and social justice worker-in-progress.