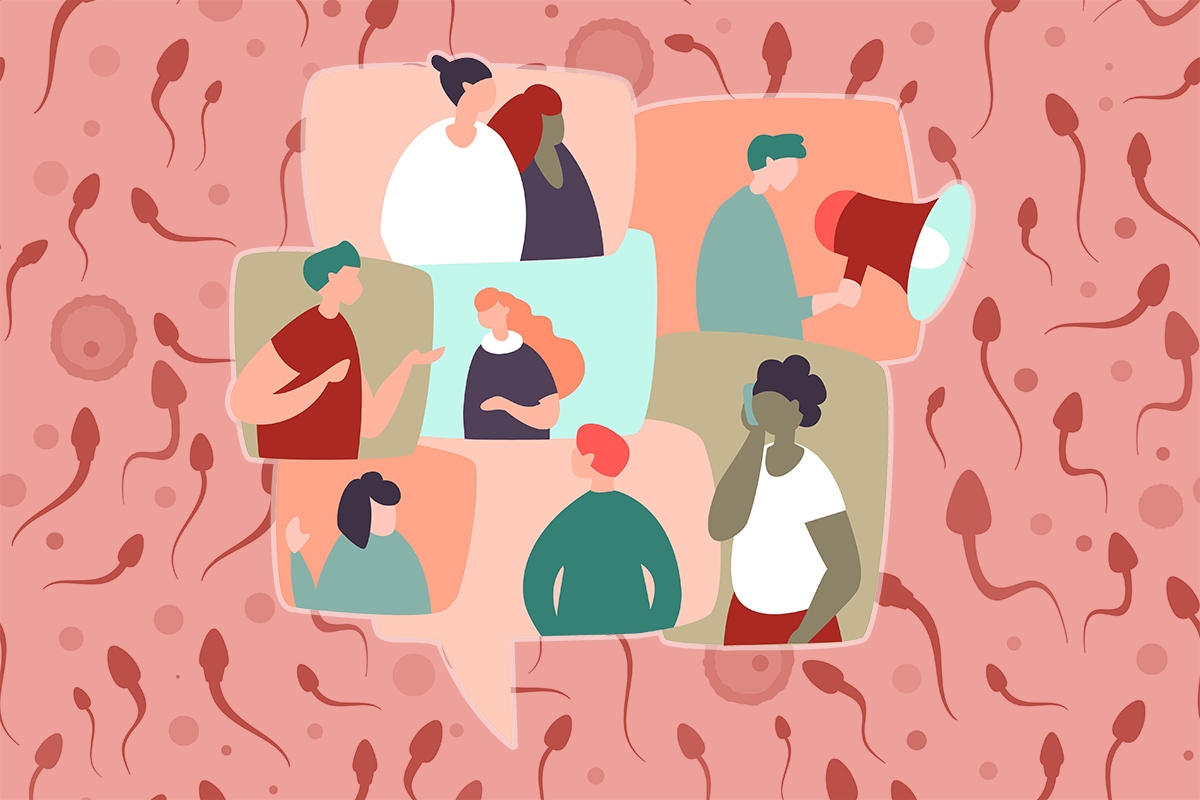 Nobody ever dreams about infertility when dreaming about their future life. You don’t daydream about what feels like to self-administer endless shots with needles as thick as Q-tips. You don’t fantasize about getting the follicles or your uterine lining measured for the 100th time. Nope, you never think of any of those things.

Since childhood, I kept journals filled with the names of my future children — middle names and Jewish names included. They’d change throughout the years, getting weirder through my angsty, “alternative” phase in the late ’90s, and then softened by hippie undertones when I became convinced I was some reincarnated flower child.

As I got older, I stopped journaling my future children’s names. But before I’d fall asleep at night, I’d say a silent prayer for their souls, and ask God to give them to me as soon as they thought I was ready. I had it all planned out: Three kids, all spaced two to three years apart, all before age 30.

It’s funny how life works, though: The path to motherhood that I imagined for myself was met with a very different itinerary.

It took us approximately six years of trying to conceive (TTC as we call it in infertility community) before we got an actual diagnosis of why we were not yet parents, and what our next steps would be to try and get us there.

Before that, my gynecologist’s advice was merely to have more sex. (Oh, is that how it works?) Every time we confessed our worries to family and friends, we were met with the standard: “Just relax and it will happen!” Or the super inappropriate: “If it’s meant to be, it will happen.”

My personal favorite was: “You’re so young. Give it some time.” But here’s the thing: Your eggs do not care how young people think you are. Your eggs are just sitting there, mocking you and dwindling in numbers (and, not to worry, your reproductive endocrinologist will remind you of this). I would stare at the walls in my fertility clinic, imagining my aging eggs and hoping that I was not destined to have a fate like the biblical matriarch Sarah, who gave birth to her first child in her golden years.

It’s funny how when you’re going through something so very personal and challenging, you seek out people going through the same personal and challenging things. Misery — and infertility — love company. I discovered the TTC communities online through message boards, and then Facebook, and eventually I was searching hashtags on Instagram and finding women who were on the exact same page as I was. In many ways, these “cycle sisters” became my lifeline. I could talk to them about feelings I had that not even my best friends could understand.

Eventually, it was decided that IVF would be the best option for us. I was terrified, and I was angry with the women in the TTC communities online who tried for a few months, and then magically became pregnant with just a round of Clomid, or maybe were able to conceive with a much less invasive round of IUI. Or worse yet, those women who would write about how they just stopped trying and — voila! —  pregnant after a few months. They’d end their comment with words of inspiration and encouragement, reminding us “infertility warriors” to never give up, that it was all in God’s timing.

Leading up to my IVF cycle and then well into the whole process, I went a little wild:  I followed every bit of advice I could glean from my TTC message boards. I got so much acupuncture that my insurance company cut me off. I had fertility massages; I steamed my vagina under a full moon with a woman who said she was a fertility witch; I did yoga in a yurt and chanted about moon cycles; I lit Shabbat candles for my future baby. I ate pineapple until the roof of my mouth was raw from the acids because I had read on countless threads that the bromelain in pineapples is said to help support blood flow to the uterus and help with inflammation. (Women in TTC communities will often use pineapple emojis when wishing a woman “sticky vibes” after an embryo transfer.) I wore socks everywhere because, as they say, “warm feet, warm uterus.”

I even reached out to my Rabbi’s wife to inquire about visiting a mikveh, although I could not tell her exactly why, because I knew that the Torah instructs us to “be fruitful and multiply.” I was worried about any judgment from the community, and was dealing with internalized guilt that maybe this was happening because I did not marry a Jewish man, or kept kosher, or ate hametz that year during Passover. In hindsight, I know how silly this all was — I wish that I had sought more comfort from my rebbetzin.

My IVF cycle — from start to FET (Frozen Embryo Transfer) — took almost nine months, and there were many hurdles to jump through. Just like any other woman undergoing fertility treatments, my belly and butt were bruised and tender. My abdomen constantly felt uneasy and my heart was always on guard. It’s hard to be excited for something that will either result in the highest joys or deepest sorrows, so I tended to attempt to play it cool, even though I felt like I was jumping out of my skin most days.

Fortunately, the TTC community was really there for me. These women became my own personal cheering squad — even as some of them were swallowing tears, fears, and envy because maybe they were in a different place in their fertility journey than I was. But that is just what we do for each other — smile and offer encouragement even on our worst, most painful days.

We were very lucky. I thank every God every day for our blessing, our miracle science baby. Our 15 eggs turned into 10 fertilized eggs, which became seven blastocysts and then, after PGS (Preimplantation Genetic Screening), resulted in two Grade A, semi-hatched embryos — one of which is now sleeping soundly in our bed after I let her stay up late watching Tangled for the second night in a row. Our last remaining embryo is patiently waiting for us to implant her, which we hope to do in early this year, God willing.

I know how fortuitous we are. I know how much other couples have suffered, how many losses they’re dealt with before having their baby. How many losses some are still experiencing, only to decide that they just cannot put their bodies through one more procedure. How hard it is for some to leave the TTC community because trying to keep it together through one more pregnancy announcement will break them.

They call us IVF Warriors, which is a cute and fun way to give us power when we’ve pretty much felt powerless in our bodies. But the true power, for me, has been the community of women who I met at my worst. The power is in the sisterhood of solidarity, and shared struggles that no one understands unless they, too, have felt powerless against infertility.

We found out we would be parents on Rosh Hashanah. I made six loaves of my great-grandmother’s honey cake. I was 33, and the baby was due on my birthday (she came a week earlier, to the day). It was not the scenario that I had fantasized about, but it was our journey. I believe with all of my heart that her soul had been waiting to give me this gift at this very moment.

Her Jewish name is Malka Miriam. She’s named after my late Nana and the biblical figure Miriam who, in true sisterhood fashion, led women with a timbrel in her hand when the Israelites left Egypt. She was a woman who experienced great suffering, but managed to be there for her sisters in a moment of need — just like  my TTC community.