I Was Skeptical About the March Against Anti-Semitism. I Was Wrong. – Kveller
Skip to Content Skip to Footer

I Was Skeptical About the March Against Anti-Semitism. I Was Wrong. 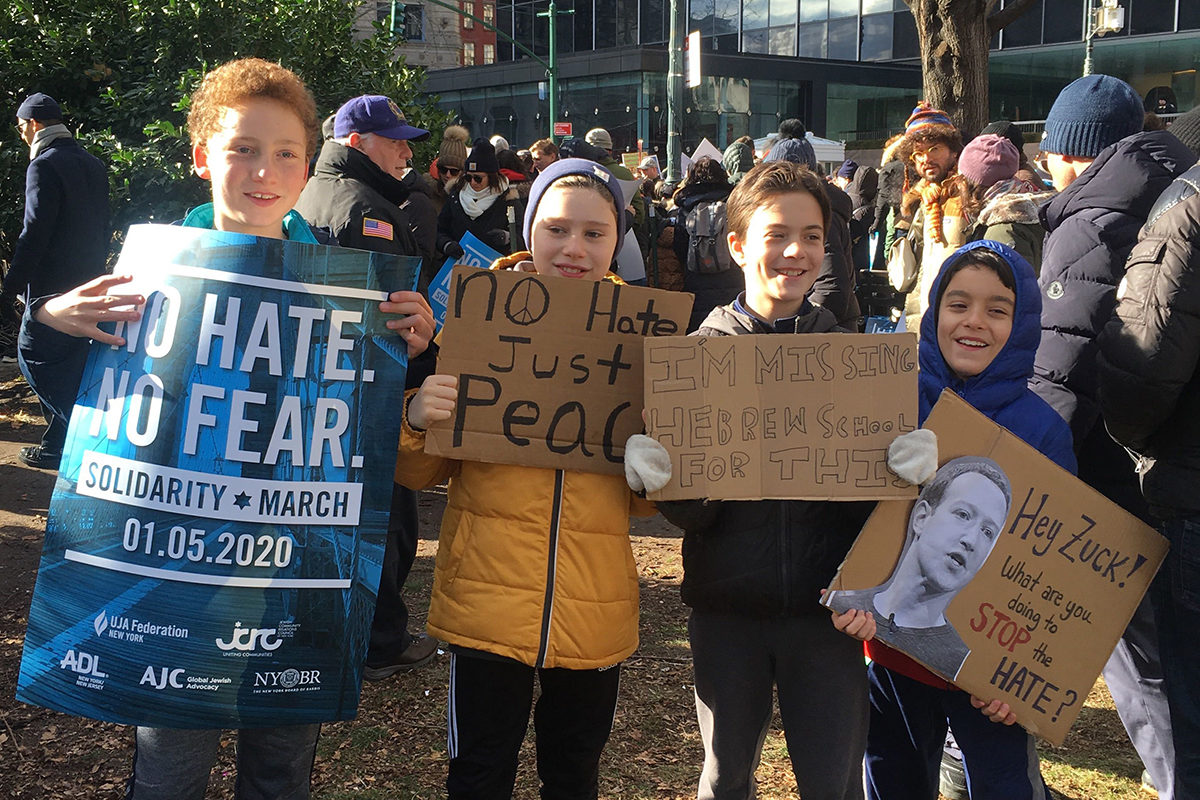 The decision to take our kids to Sunday’s No Hate, No Fear Solidarity March did not come easily. At least, not at first.

It’s hard to say what, precisely, gave me pause. My kids are no strangers to social activism — their elementary school is named for a civil rights leader, after all. One of my main goals as a mom has been to teach them to speak out when something is not right. Since they were very young, I’ve schlepped them to Occupy Wall Street demonstrations, various climate change protests, rallies decrying standardized testing in schools, the Women’s March, and so on.

So why did I hesitate when the most recent action was about standing up for our fellow Jews? At first, I blamed it on not wanting them to miss Hebrew school, and the feeling that my kids need to get back into the regular rhythm of things after the winter break. (That’s especially true as my older son’s bar mitzvah will be later this year, and let’s just say a lot of learning needs to happen between now and then).

But if I’m being really honest, what made me hesitate was worry. Worry that was not about the potential for violence — although that fear is certainly very real, and very present — but about who our fellow demonstrators may be, and whether or not they’d reflect the diversity of New York City. The rally was impressively organized in a haste by a number of Jewish organizations, including UJA Federation of New York and the Anti-Defamation League, and I had seen a considerable amount of chatter about it in Jewish circles on social media.

And yet, the discussions outside these circles — at least from my experience last week — were almost nil. When I asked other social justice-minded friends whether or not they planned to attend Sunday’s solidarity rally, I was usually met with the response: “What rally?”

The very fact of the march’s existence seemed to have gained little traction outside the Jewish community, and I worried that the only people we’d find there would be Jews. And then, my thinking went, what kind of message would I be sending my children? That we, as Jews, have a responsibility to repair the world and to speak out for those who are voiceless, but when it comes to fighting anti-Semitism, well, that’s an issue that’s only for Jews?

And so, I dithered about whether or not we should go, and then I dithered some more. And then, after reflecting on all that had happened in recent weeks, I realized how misguided my initial response was. I didn’t even have to look far for an attitude adjustment: As the editor of Kveller, I’ve worked with writers on powerful responses to the recent rise of anti-Semitism, from Talia Liben Yarmush’s moving call for unity to Jordana Horn’s Jewish take on resistance.

Unbidden, the famous quote from Hillel the Elder popped in my mind: “If I am not for myself, who will be for me? If I am only for myself, what am I? And if not now, when?” I realized, that by attending the rally, we’d not only be teaching our kids how crucial it is to stand up for others — we’d also show them that when it’s our people who are being bullied, it’s our duty to stand up for ourselves. Now. And if Sunday’s march turned out to “only” be a demonstration of Jewish pride by Jewish people, well, that’s a pretty powerful statement in and of itself.

Once we made the decision on Friday evening to attend, I knew it was the right choice. (Even my kids reluctantly agreed, though I think the chance to miss Hebrew school was what sealed the deal.) And then — wouldn’t you know it? — by Saturday night, I saw that a wider array of organizations had signed on, including the NAACP. I even saw it mentioned a few times by non-Jews in my social media feed.

And so we went to the rally, and, at the last minute, we made plans to go with friends, a development that markedly increased my kids’ enthusiasm. We met up on the subway platform and arrived near Foley Square in Manhattan around 11:15 a.m. — late enough to be representing the rear. At first, we fell in among a smattering of Guardian Angels, the volunteer crime-prevention group that’s been patrolling Brooklyn’s Jewish neighborhoods since the violence began. As we slowly wound our way through the barricaded streets, we ran into acquaintances and paused for many photos. We stood next to a group of young families singing Hebrew songs together, and later, among a group of teens affiliated with Zionist youth movement, Habonim Dror.

Perhaps the march wasn’t as visibly diverse as others we have attended, but it was truly an all-ages affair, from babies in strollers to people easily in their 80s and up, some stoically overcoming physical challenges to complete the 1.5-mile trek. At one point, during our slow approach to the bridge, our kids took to jumping and chanting, just as you see at a soccer match, in order to warm up. An elderly man enthusiastically joined in — in fact, he even kept on jumping after the kids gave up. “I can’t take him anywhere,” a woman who appeared to be his partner quipped.

I don’t know what it was like for those at the front of the march, where VIPs such as senators Chuck Schumer and Kirsten Gillibrand led the crowd, while my Congresswoman, Alexandria Ocasio-Cortez, reportedly mixed it up among the throngs of people. For those of us near the back, we spent far more time waiting than walking. It was cold and windy, and the crowd was eerily quiet, generally absent of chants and mayhem. There were several times when I tried to bring the energy — something I’m normally really good at, just ask my kids — but the vibe just wasn’t there. As our trudge across the Brooklyn Bridge passed the three-hour mark, I became increasingly focused on when and how I’d find a bathroom.

Absent singing or yelling, we quietly plodded along, our feet speaking the words that didn’t pass our lips. Perhaps the silence was because the crowd wasn’t the typical protest crowd, and didn’t have a mental library of chants at the ready. Maybe it was because the reason for our march — anti-Semitism — was an impossibly polysyllabic word. (At one point, our kids tried to do a lettered call-and-response — ”Give me an A! Give me an N!” — but, after several spelling failures, gave up.) A friend pointed out that perhaps the silence stemmed from the unprecedented circumstances: For many of us, it was an unusual thing to proclaim our Jewish identity so publicly.

While the diversity of New York was no doubt represented, the solidarity march was first and foremost a Jewish gathering. And it dawned on me that I had never been in a crowd of Jews that large, ever. And that simple fact was actually pretty — no, make that very — cool. (We are not religious, so the events commemorating the end of the Talmud cycle was not something for us, and I was a bit too young and out-of-touch to have attended the 1987 Free Soviet Jewry March, which drew some 250,000 Jews to the National Mall. As a kid growing up in the Midwest, Washington was a million miles away, anyway.)

By the end of the day, the organizers estimated the crowd at 25,000 people. For an event that was organized in days, it was an impressive turnout, and one in which I was proud to take part.

Would my kids have preferred to stay home and play Fortnite? Absolutely. Would they have preferred Hebrew school? Not a chance. And I’m OK with that — I believe that hating Hebrew school is a Jewish kid’s rite of passage, so whatever. But more than anything, by participating in this historic event, I think we imparted a very important Jewish lesson to our children: Being a Jew doesn’t just mean learning Hebrew, reciting prayers, celebrating holidays, or even tikkun olam. It’s also about showing up, speaking out, and standing proud about who you are.