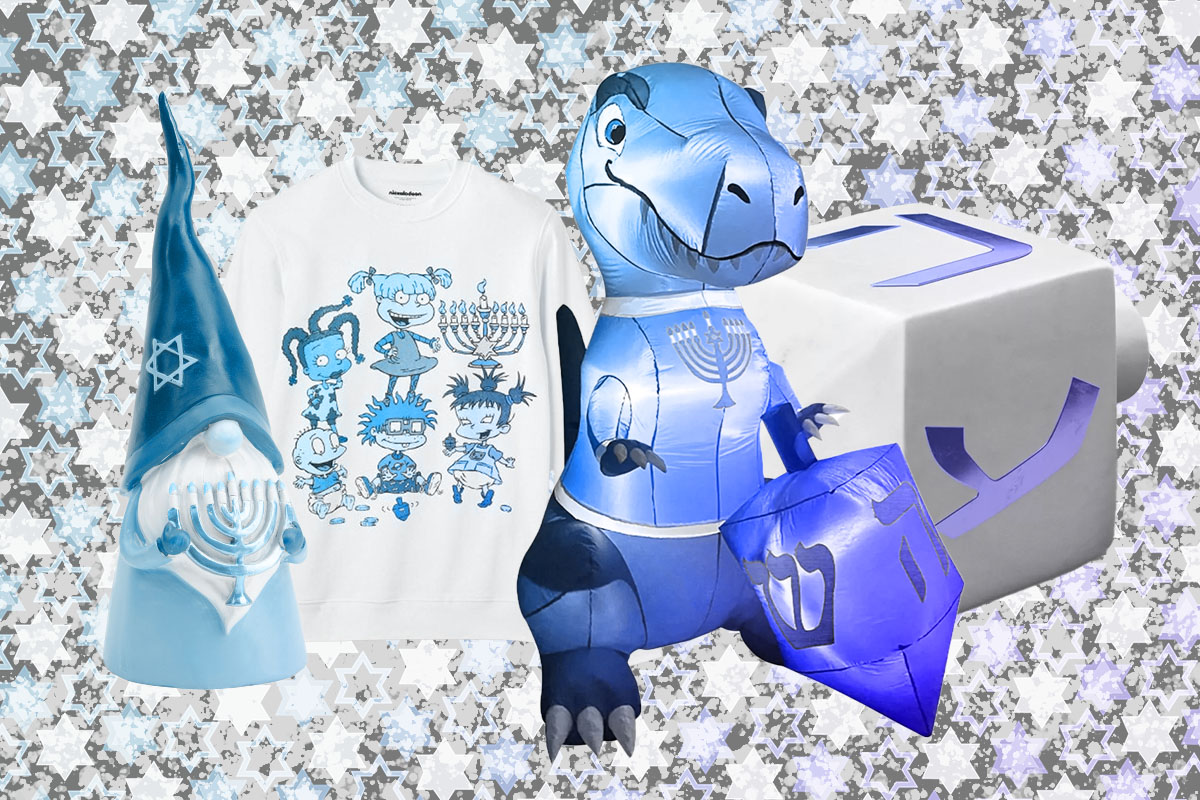 This year, we have a Hanukkah-themed mantle, and — I don’t know why — it’s just make me feel like… I’ve arrived.

There’s a dreidel garland and a few hanukkiahs — a whale one, a wooden one for my wild toddler, a fancy battery-powered one with plexiglass candles that my oldest son constructed by hand from a popular activity kit. There’s a glass dreidel jar filled with gelt. My art nook currently has a couple of DIY menorahs that are still drying, waiting to join the rest of the festive display.

Looking at it while sitting on my couch just fills my heart to the brim, seeing the center of my home — its heart(h), if you will — so brimming with symbols of Jewish pride.

Most of the items on the mantle were purchased this year, when I developed what some might call a mild Hanukkah-related shopping addiction (I blame late-night nursing and the Target app.) And this year’s offerings in the Hanukkah marketplace have honestly been so abundant. It used to be that, at best, you could maybe find a small smattering of nice Hanukkah products in the wild. Yet now, at Target, HomeGoods and other chain stores, shelves — heck, sometimes entire sections — are full of Hanukkah paraphernalia, and I must say that it feels a little miraculous.

I’ve bought my kids wall decals and craft kits from Michael’s and Target. I’ve purchased an honestly unreasonable amount of Hanukkah shirts and sweaters — like, why does a 4-year-old need four Hanukkah shirts with Mickey Mouse and dinosaurs on them? Do we truly need yet another set of matching Hanukkah pajamas because the lions on it are so friggin’ cute?

The truth is, I’ve just been carried away by the joy of it all.

“You guys, the joy this Jewish girl is experiencing at Target right now is so profound, we have been upgraded,” one Florida Jewish mom shared in a viral TikTok from this November, perfectly echoing my feelings. Jewish mom Marion Haberman of MyJewishMommyLife has also been sharing her joy at the proliferation of Hanukkah merch at Target and Homegoods.

Though… not everyone is experiencing this Jewish commercial joy so, well, joyfully.

As I browse TikTok, Twitter and Instagram, I see a lot of commentary about Hanukkah wares. People are mad about the zoology of recent Hanukkah merch which has truly expanded this year, scoffing at Hanukkah llamas and dinosaurs. (They’re also wildly entertained by this accidentally phallic lion menorah — which, same.)They’re mad about the commercialization of a holiday that’s all about fighting assimilation. And they’re really, really angry about Hanukkah gnomes.

If I have to keep looking at these Chanukkah gnomes then you do too! Happy Chanukkah season everybody! #chanukkah #hanukkah #jewish #jewtok #hanukkah2022 #chanukah #hannukah #homegoods

I get it — this is literally the season where Jews love to yuck someone else’s yum. We’ve all seen the viral debates about latke toppings (ketchup on latkes, anyone?). We are Jews, after all. The value of arguing is a matter of both nature and nurture for us.

I also get it because historically, some Hanukkah merch has felt off-putting and clearly designed by non-Jews — and there is something just so off about someone who isn’t part of our religion trying to sell us some half-assed white, yellow and blue trinket. I mean, sometimes this merch has been downright offensive — I can’t forget the gelt digger sweater or the chocolate Maccabees that were actually covert Santas inside. And a Santa dreidel? Come on.

But I also feel like, particularly this year, we’re overthinking all of this a little too much (even though I know that overthinking is literally in the “being Jewish” job description.)

These chains don’t have Hanukkah merch just because they want to be inclusive. Capitalism is wont to do what capitalism is wont to do, and when it sees an open market to corner, it certainly does. It’s not a coincidence that the Hanukkah displays at my local chain stores, from Target (kavod) to Five Below (I’m really not sure what the deal is there) have been raided. I’m not a unique Jewish snowflake. Jews love being Jewish — now more than ever. Recent years have seen more of us wanting to embrace, not hide, our minority statuses, be they what they may be. In the age of genetic kits and frank discussions about representation, many of us want to show our Jewishness off.

A lot of chains are designing their own Hanukkah merch: Hanukkah sweaters, Hanukkah pajamas, Hanukkah decor and so much more. Most of Target’s Hanukkah merch was design by Jewish Target team members and designers. Are the Jewish puns always good? No. But that doesn’t mean that someone won’t enjoy them.

Even the horror that is Jewish gnomes was designed at the request of Jewish consumers. And saying that gnomes have antisemitic origins is just not accurate — as this great Twitter thread explains.

It’s also a great way to shame someone who genuinely enjoys the cute garden creatures (or those who like me, grew up on “David the Gnome” and love the idea of a gnome lighting Hanukkah candles).

When we try to gatekeep these things, we often wind up inadvertently gatekeeping Jewish joy. Just because one Jew finds a “this is how we roll” sweatshirt offensive doesn’t mean that another dreidel lover won’t be enamored by it. (Though I think we can all agree this Rugrats Hanukkah sweater is the best.)

Just like with any holiday decor, it’s kind of a taste thing. And now that there’s more Hanukkah merch out there, we can cater to specific tastes — whether more stylish and refined or more kitsch.

I do understand being mad and confused about the commercialization of Hanukkah. The narrative about assimilation scares a lot of Jews, especially at a time of rising antisemitism, because it suggests a kind of complacency and a belief that we are safe somewhere when we really aren’t. We think of all the times we tried to blend in, and all the times we ended up persecuted and killed throughout history. Are we, as Jews, safe in America? It’s a questions that a lot of us are asking ourselves right now. Dare we put up big blow-up dreidels on our lawns and star of David garlands in our windows? And even beyond  the questions of safely, it’s hard to embrace the fact that that yes, in some way, Hanukkah has been Christmafied.

And yet Hanukkah can be defiantly celebrated in light of Christmas hegemony — even if we’re using the language and tools of Christmas to do it.

As Rabbi Seth Goldstein said in a viral TikTok post, “Judaism has never existed in a vacuum and always been influenced by the major culture.”

Hanukkah doesn’t have to be about celebrating in secret. It can be about proclaiming our survival. It’s about embracing our traditions — new and old. It’s about sharing that joy and that pride with our children in a language that they can understand. Kids and adults alike love animals, dinosaurs, cutesy things. My son adores his myriad of Hanukkah dinosaur wares. He is so proud of his handmade menorahs, so happy to collect his gelt from a dreidel jar, to spin a bazillion sevivonim.

Hanukkah is about shinning through the darkness. In a way, that is compatible with tinsel, and lights, and big inflatables — they’re just an extension of that menorah in the window. A defiant way to show that we’re here, to celebrate our Jewish identity, especially at a somber time of antisemitism.

This merch is a unique display of what Hanukkah in America means. And that’s kind of special.