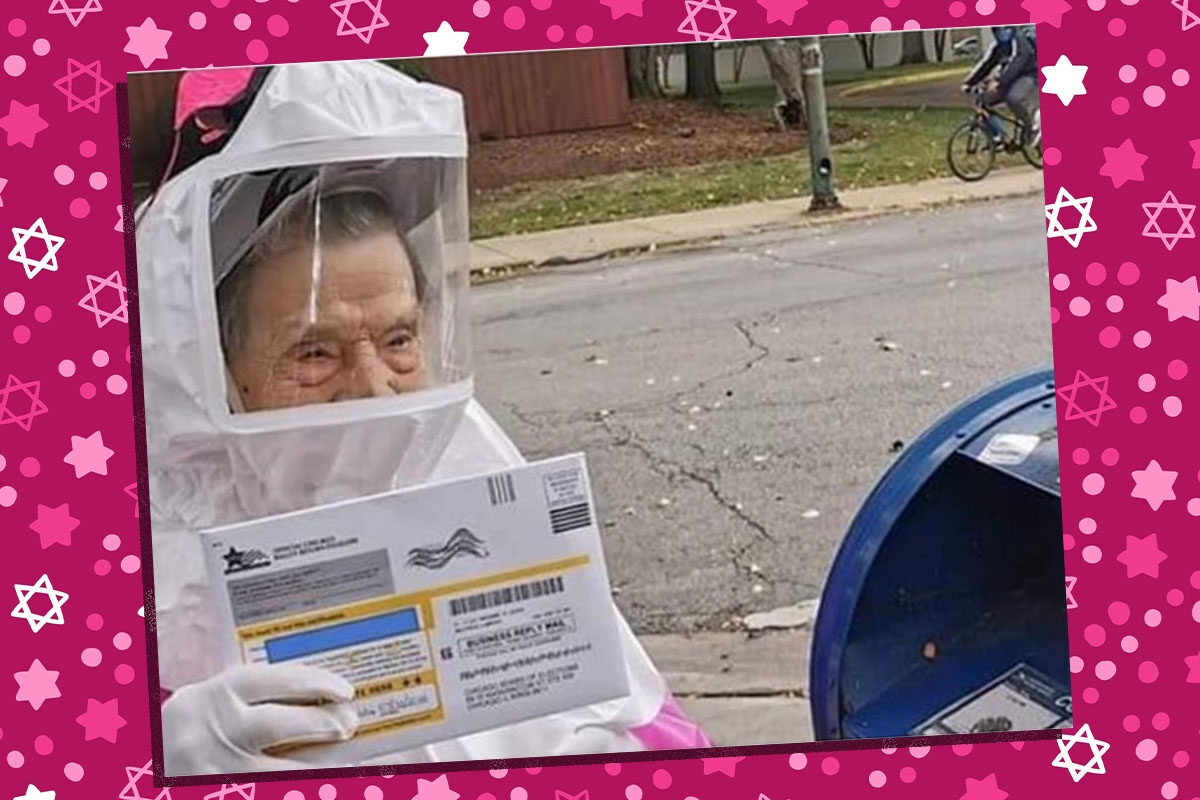 We are now less than a month away from what’s likely the most significant American election of our lifetimes, and many, many people are mobilizing to get out the vote. Among them: a remarkable 102-year-old Jewish woman, Beatrice Lumpkin.

A photograph of Lumpkin mailing in her absentee ballot  — while wearing a homemade hazmat suit — recently went viral on social media:

Good morning! This is 102-year-old CTU retiree Bea Lumpkin casting her vote-by-mail ballot. If Bea can do it, anyone can do it. Vote!

Lumpkin was born in 1918, during the height of the Spanish Flu pandemic. As the Forward reports, she grew up in a working-class Jewish neighborhood in the Bronx; her parents were immigrants from Eastern Europe who worked in the garment industry — first in factories (including the Triangle Shirtwaist Factory, the site of the deadly 1911 fire that catalyzed the Jewish labor movement) and then as owners of a laundry business.

As Lumpkin told the Washington Post, she hasn’t missed a presidential election since 1940 — and she wasn’t about to miss one now, pandemic or no. “It’s always important to vote, but this election — it’s the most important one of my life,” she said, adding that “democracy is on the line.”

Lumpkin has dedicated much of her long life to activism: She joined the Young Communist League in her teens, where she was introduced to pro-union and anti-fascist causes. In the 1960s, Beatrice advocated for the inclusion of Black authors and Black history in Chicago Public Schools, where she was a math teacher. She ultimately taught about the history of Egyptian mathematics and wrote a book for kids centering the “multicultural history of mathematics” called Senefer: A Young Genius in Old Egypt.

“When I was born, women couldn’t vote,” she told CBS radio’s WBMM station, adding that her first ballot was cast for President Franklin Delano Roosevelt.

As for this election, Lumpkin was a supporter of Bernie Sanders, but, as she told the Forward, “There’s no question that everything [Sanders] stands for requires the election of Joe Biden.”

As the photo of Lumpkin — wearing custom PPE designed by her grandson, Soren Kyale, also a Chicago Public Schools teacher —  made its rounds online, many politicians, regular people, and organizations shared it, urging Americans to “be like Beatrice” and vote.

Lumpkin’s dedication to voting is a message of hope we all so desperately need right now. She also has a message for Jewish Americans, in particular: “Racism lives on, antisemitism lives on,” she told the Forward. “It’s always important for Jews to vote.”