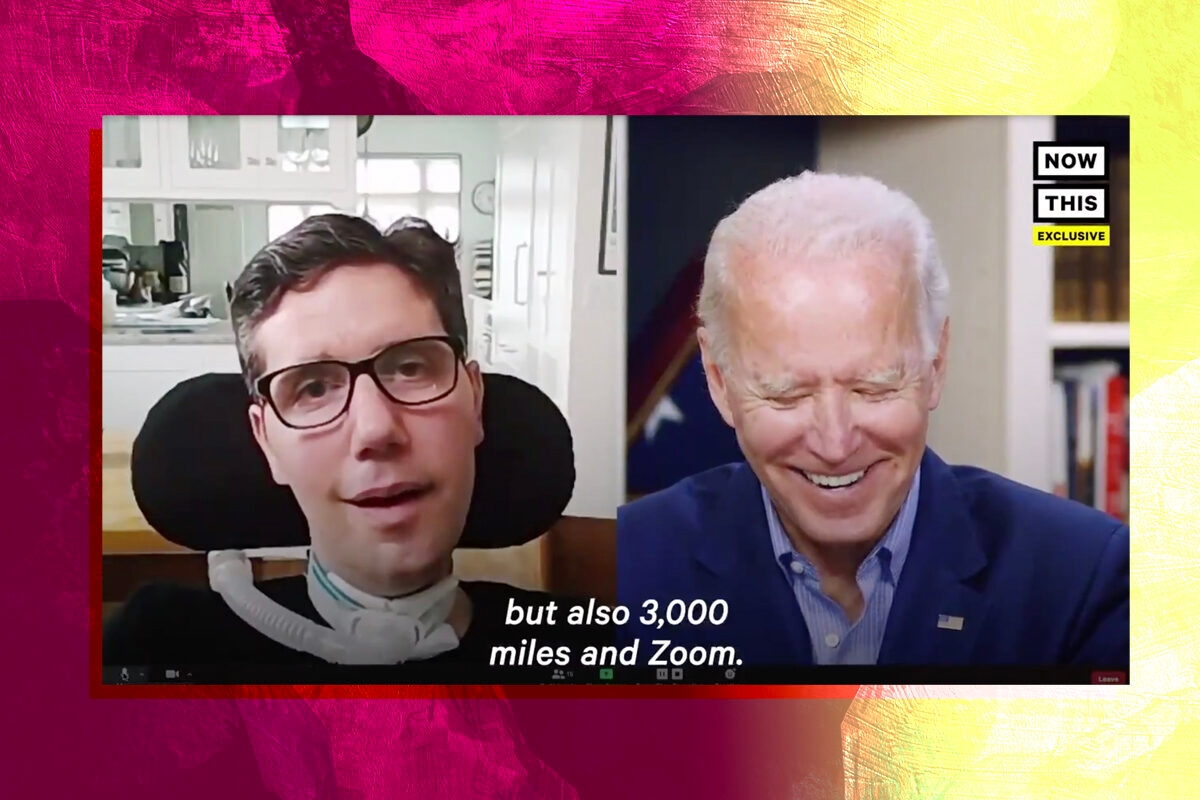 Jewish activist Ady Barkan is dying from ALS, but he is doing all he can to make sure that the country he leaves behind is a better place for his two children — and the rest of us. For Barkan, an important part of that work includes holding political candidates accountable for how they shape our future.

Back in July of last year, Barkan got a shout out from Elizabeth Warren — whom he had previously endorsed —  during the Democratic debate.

“I’d like to finish talking about Ady, the guy who has ALS, ” Warren told the crowd in Detroit. “This isn’t funny. This is somebody who has insurance and is dying. And every month he has about $9,000 in medical bills that his insurance company won’t cover. His wife, Rachel, is on the phone for hours and hours and hours, begging the insurance company, ‘please cover what the doctors say he needs.’”

Now, in the midst of a pandemic, Barkan, who can only speak using eye gaze technology, interviewed the Democratic nominee for president, Joe Biden over Zoom from 3000 miles away.

It is a moving and intimate conversation — one that is sure to bring many to tears (including, yes, yours truly). There is camaraderie, though Barkan also pushes Biden on important issues — including Medicare-for-all, a topic on which the two disagree. (Barkan is in favor; Biden is not.)

If you’ve never heard Barkan, it’s worth remedying that ASAP. The 36-year-old lawyer turned health care activist and Jewish father is truly someone worth following on social media.

“He and I have meaningfully different perspectives on the world; not only on what ails it, but on what we must do to address those maladies,” Barkan said in a recent statement endorsing Biden. “And yet despite the literal and figurative distances between us, I know that the vice president heard what I was saying. He listened, he understood, and he promised to continue doing both after he is elected.”

The 30-minute long interview starts with a conversation between Biden and his wife, Jill, and Barkan, his wife, Rachel, and their two kids, Carl and Willow. The Bidens offer to send the kids two stuffed toy representations of their German shepherds. It’s a sweet moment that showcases Barkan’s beautiful family.

Barkan talks to Biden about how his work is making “his personal tragedy about more than him,” and that his activism is a way to connect with other people. Biden and Barkan also bond about Biden’s own personal tragedies, including the loss of his wife and daughter to a car crash when he was 30. “That tragic accident happened 11 years to the day I was born,” Barkan tells him, saying that they are forever connected by that date.

In the conversation, Barkan pushes Biden on difficult subjects, including healthcare. Barkan makes it clear that, for him, these issues are incredibly personal: He has a great private insurance plan, and yet he and his wife spend countless hours on the phone with his insurance company, and still fail to get parts of his care covered by insurance.

Still, despite their disagreements, it’s clear that Barkan and Biden are both committed to making sure Trump loses the 2020 election, and that Barkan embraces much of Biden’s policies. They talk about Trump’s failings in dealing with the pandemic, and how Biden would do a better job.

They also talk about Black Lives Matter. Barkan connects Biden’s loss of his own children and his heartbreak “when I think about the decades of joy that I will miss out on” with his own children to the murders of Breonna Taylor and George Floyd, and the need for police reform.

Barkan’s last question has to do with fatherhood. He asks about Biden’s son, Beau, who died of cancer in 2015. Barkan asked Biden what he thinks Beau’s guidance to the American people would be in this difficult hour. “I hope he’d be saying that ‘My father is totally authentic’… when he makes a mistake he’ll tell you he made a mistake, and take responsibility. And even if it’s not popular, he will push things that he thinks are a matter of principle that relates to our values.'”

“Everyday you ask, ‘How are my children going to remember me?'” Biden says.

“That why I do the work I do,” Barkan movingly responds, “to make sure that Willow and Carl are proud of me.”

Grab some tissues and watch the entire heartfelt conversation below:

Watch @JoeBiden's heartfelt discussion with activist @AdyBarkan, who is dying of ALS. They talk about health care, police brutality, fatherhood, and overcoming grief in this emotional final episode of Barkan's 2020 election series https://t.co/iKmzIu580x

Screenshot from Now This News