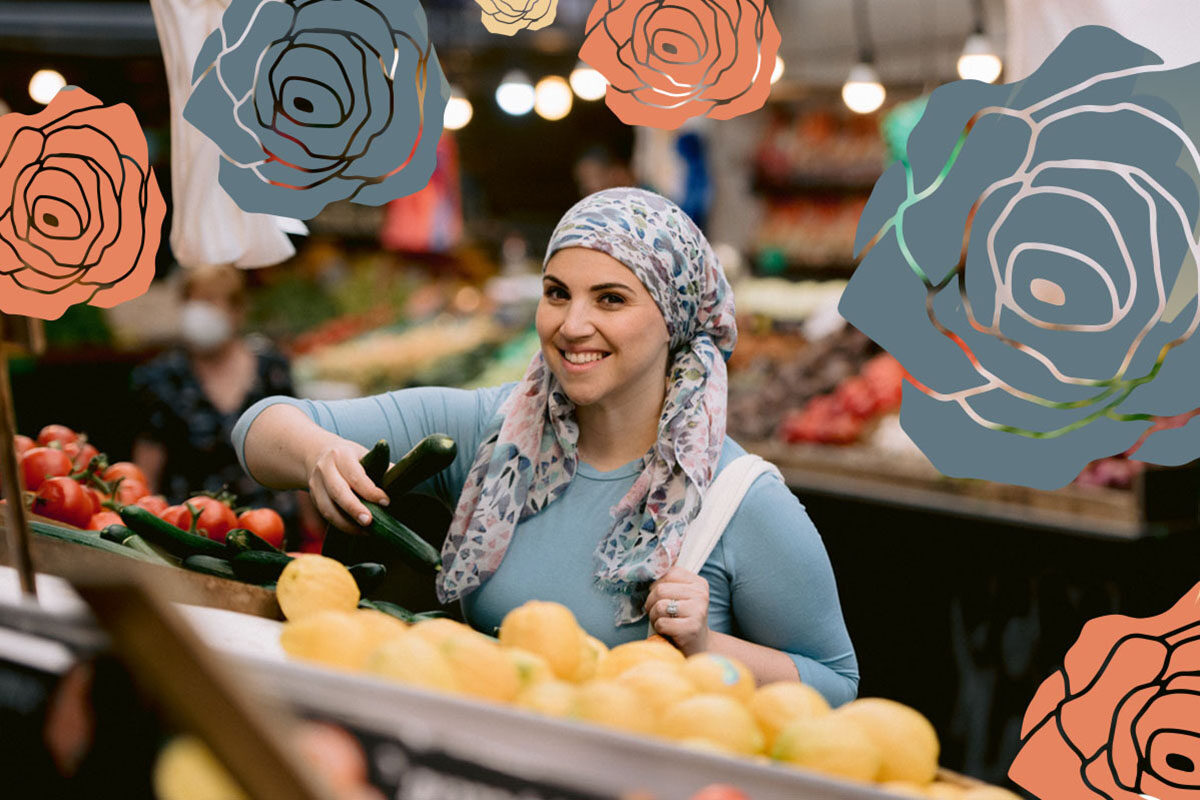 “We can appreciate our blessings” — even during a pandemic, explains Danielle Renov, the New York-born food maven behind the popular cooking blog Peas, Love & Carrots. With over 60,000 Instagram followers, Danielle is emerging as a major food influencer in the kosher food world. Her first cookbook — also called Peas, Love & Carrots — was just published in July and it sold out before its release date. It’s now in its second printing.

As Renov recently told Kveller: “I grew up in a multicultural home.” Her mother was born into a Jewish family in Morocco and grew up in Paris; her father’s parents were Holocaust survivors who moved to the U.S. Food was a way of bridging the many divides in her family — both Ashkenazi and Sephardi traditions and as well as different nationalities.

“Food was a connector,” Renov says. The kitchen table was one place where everyone could come together — not as Ashkenazi or Sephardi, but as themselves, bonding in a deep way over food.

Growing up in an eclectic environment taught Renov ways to merge different flavors and create delicious new dishes and tastes. She recalls her mother using Sephardi spices in classic Ashkenazi dishes — usually with delicious results. Often, the family enjoyed Moroccan comfort dishes like stews and spicy sausages made with leftover chicken. These home-cooked meals, incorporating both Sephardi and Ashkenazi flavors, “hold such warm memories for me,” she says.

Thirteen years ago, just weeks after marrying her husband, Eli, Renov moved to Jerusalem, adding yet another element to her melting-pot style of cooking. With food more expensive in Israel, Danielle found that Israelis were more willing to cook at home than Americans — and also to use fresh, seasonal ingredients and more fruits and vegetables.

Navigating grocery shopping in Hebrew was a challenge, so Renov began making lists: of ingredients, cooking-related vocabulary, metric conversions, as well as places to buy food in her new neighborhood. These endless lists were the start of her blog, as Renov worked hard to quantify the foods she was cooking with and listed ingredients she needed for meals. “I literally wake up in the mood for something and it just happens,” she says. “I like to eat and I like to cook.” Seeking to turn her vision for a dish into a reality, she would scour Israeli grocery stores looking for just the right ingredients.

Renov discovered that a big challenge of life in Israel was the seasonal nature of produce. “In America, if I wanted strawberries, I could get them all year round,” she says. In Israel, by contrast, strawberries only made an appearance for a short time during the winter. And it was the same story with other ingredients. “I had to learn to go with the flow and adjust to what is in season — and my cooking is better for it.”

Renov favors spicy foods and strong flavors. “A lot of citrus, vinegar, wine,” she says. Her tastes veer towards the aromatic, fresh Sephardi dishes of her childhood, like spicy meat and potato stews and deep-fried Moroccan cigars stuffed with seasoned meat. But she loves Ashkenazi classics, too: “A piece of potato kugel right out of the oven — you can’t beat that,” she says.

Many of her recipes and blog posts address the challenges of cooking for multiple children. She and her husband have seven kids, ranging in age from 1 to nearly 13. “How do you get kids to eat real food?” is a question Danielle hears often, and she has some creative answers.

One strategy is to start preparing sophisticated foods when kids are young; it’s older kids who develop strong food aversions, Renov has found. Introducing grown-up flavors and healthy meals when kids are young is one way to encourage them to eat well as they grow up. Having children take part in the cooking also helps them enjoy mealtime more, she says. Renov gives each of her kids food-prep tasks, and has them make much or all of their typical weeknight meals. Even young children can master cooking steps like mixing or whisking, she says. Some nights, she’ll flip through pictures in recipe books and let her kids choose what they want to prepare.

During the coronavirus lockdown, Renov’s writing seemed to tap into something deeper than a desire for recipes. Her optimistic, sunny way of looking at the world seems to belie an unspeakable tragedy in her recent past: In 2018, the Renovs lost their young baby son, Yakov Rafael, in a tragic accident.

Renov has advice for readers who are going through very difficult times, gleaned from her own experience. “I would say that you just have to go through it,” she says. “There’s no way around difficulty: You can’t go around it, you can’t go under it, you can’t avoid it. You just have to go through it… You have to allow yourself room to experience difficulties.” It’s a hard-won wisdom that’s resonated with her blog’s readers, some of whom faced personal tragedies and problems in these past several months of the pandemic.

Renov says traffic to Peas, Love & Carrots increased significantly after much of the world shut down in March. For so many people, being at home for three meals a day, every day was a major stressor, she notes. While in the recent past, fresh, healthful salads were traditionally the most popular recipes on her blog, during lockdown she discovered that people seemed to be cooking more with shelf-stable items they had in their pantry. Fried foods and Asian-inpsired dishes became more popular; her most viewed recipe during this period was lentil soup.

Her new cookbook is a resource that she hopes enables home cooks to create satisfying meals with whatever they happen to have in their pantry that day. For instance, the chapter on salads begins with twelve different salad dressings — “so you can use what’s in your kitchen,” she says. Her goal is to empower cooks to be flexible and build meals using whatever ingredients are in season or at hand. The recipes are kosher, but they’re flexible and usable for any home cook, whatever their level of observance.

As well as nourishing our bodies, Renov’s unique approach to life and food can also help nourish our souls. “We can contain multiple emotions simultaneously,” she says. “We can be happy and sad at the same time. My happiness doesn’t make my feelings of loss or despair any less: I can feel them both.”

“That’s been a liberating realization for me,” she adds. “You have to give yourself permission to feel multiple things at once.”