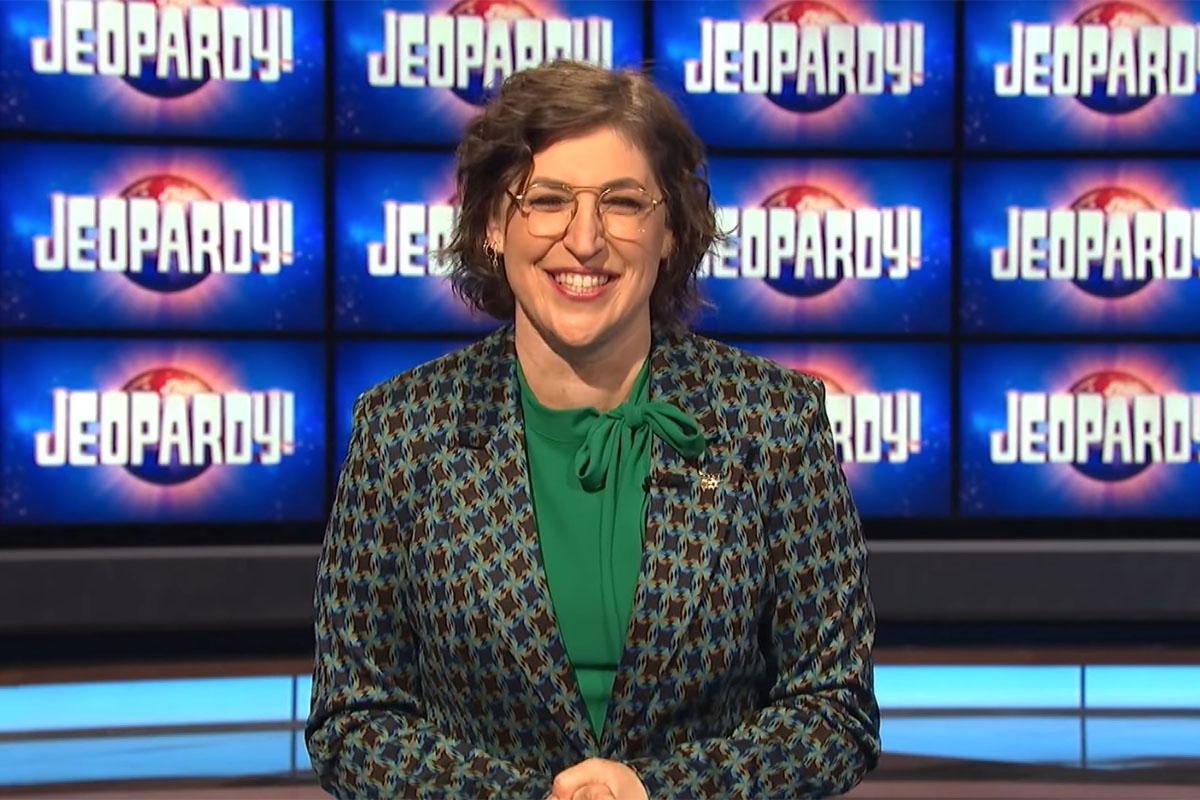 Jewish actress and Kveller icon Mayim Bialik started her two-week stint hosting “Jeopardy!” yesterday, May 31, and we could not be more excited!

We first learned that Bialik would be hosting “Jeopardy” in January, when she announced the thrilling news to her Twitter followers.

I’ll take #DreamComeTrue for $500 please.
From being an answer on the show… to guest hosting… this is literally a dream come true for me. I’ve been such a fan of @Jeopardy and Alex Trebek since I can remember. It will be an honor to guest host & celebrate his great legacy.🙏🏽 pic.twitter.com/Ra2bssb2Q3

And now, in a recent, adorable interview for Jeopardy.com, Bialik shared her connection to the quiz show, as well as how deeply her Jewish family inspired her new role.

But first, Mayim shares how Jeopardy’s late host, Alex Trebek, inspired her — Trebek was, after all, a guest star on “Blossom,” the 1990s TV show that made her a star! Mayim says she plans to honor Trebek by bringing the same “decorum” and professionality to her guest-hosting role, from her professional (yet comfortable!) attire to her commitment to sharing and communicating knowledge.

Mayim traces her passion for the show to her career in academia — don’t let’s forget that Mayim also has a PhD in neuroscience! As an actress and public figure, presenting the show as a woman scientist matters a lot to Mayim. She says: “For young girls and boys to see that women can be scientists feels very important to me.”

Mayim also credits her lifelong commitment to “learning and knowing things” to her Jewish parents, Barry and Beverly Bialik, who were schoolteachers and documentary filmmakers in Hollywood, where she grew up. She credits her parents for her ability to think quickly.

In a recent piece Mayim wrote for Kveller, she also reflects that her household was colored by mental illness, something Mayim says she could only begin to understand as an adult. While her childhood will be further explored in her upcoming indie film, As Sick As They Made Us — written and directed by Mayim! — Mayim was also inspired to dedicate her Jeopardy! stint to the National Alliance on Mental Illness (NAMI), an organization she herself has used and referred to friends for 20 years. It is so meaningful to hear Mayim speak so publicly about the importance of mental health resources, and we’re grateful she is using her platform to destigmatize the need for mental health support.

Also in the interview, Bialik reflects on how she sees this role as a triumph for her family, “as a second-generation American whose grandparents on one side never really mastered the English language,” she says. Like many second-generation Ashkenazi Jews in the U.S., Mayim’s grandparents immigrated from Poland, Hungary, and then-Czechoslovakia in the 1930s. We can only imagine the pride that her grandparents would have today for all her accomplishments!

Last but not least, as a parent of two boys, Mayim acknowledges that her sons were crucial to her new “Jeopardy!” role. “My older son is actually the one who told me they were looking for ‘Jeopardy!’ hosts,” she shares. Mayim also adds that her 12-year-old, while he respects how “iconic” this opportunity is, is not the biggest fan of his mom being in the industry. If fact, she says, “like any kid at this age,” he likes to make fun of how she looks. Yes, we can relate.

We are so excited for Mayim to take on this new role! Mazel tov to Mayim and all her family.