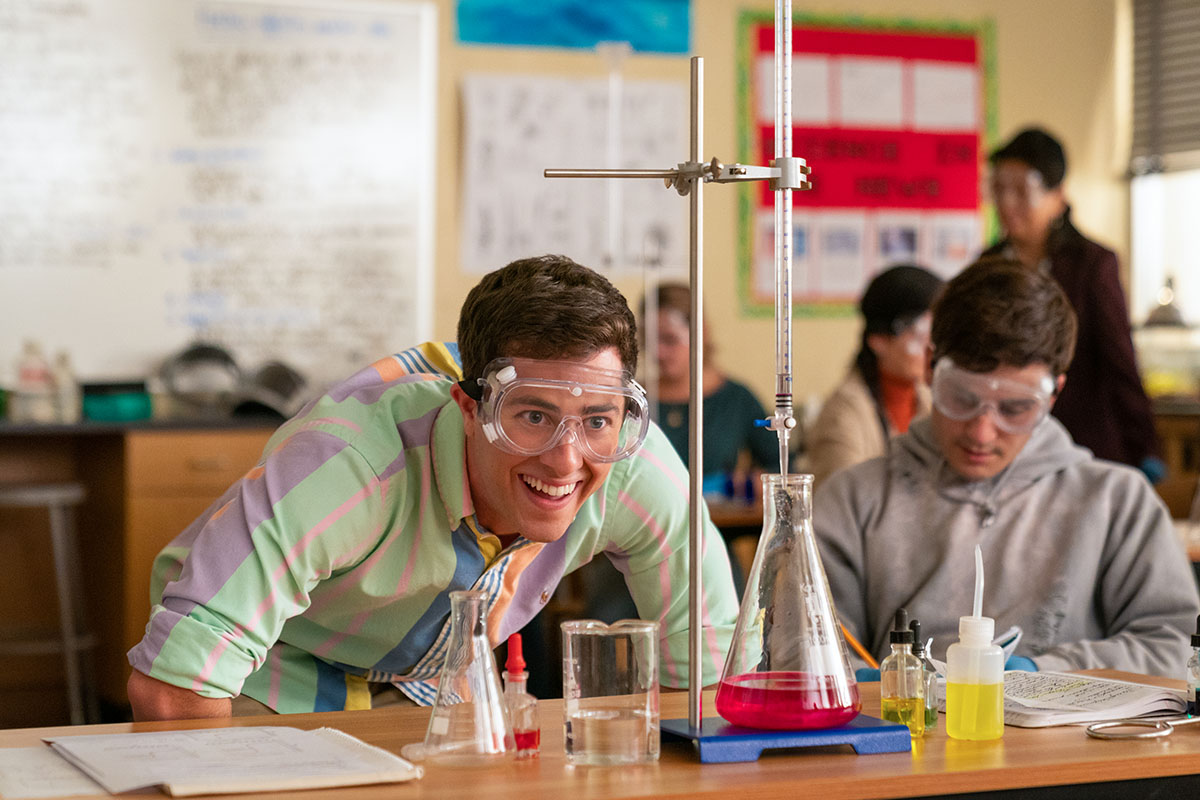 Header image via ISABELLA B. VOSMIKOVA/NETFLIX © 2021

As a rabbi who tutors bar and bat mitzvah students and as the mom of two teenagers and a 20-year-old, I thought it would be fun and possibly enlightening to watch both seasons of Mindy Kaling’s popular Netflix series, “Never Have I Ever.” It was a worthwhile endeavor, and I enjoyed deciphering the show’s slang, seeing what challenges these fictional teenagers face, and watching how they figure out how to fit into their communities and the world.

The comedy focuses on the misadventures of 15-year-old Indian American named Devi Vishwakumar. Portrayed brilliantly and believably by Maitreyi Ramakrishnan, Devi captures the viewers’ hearts as a quick-to-anger, academically ambitious student who dreams of attending Princeton University and dating Paxton Hall-Yoshide, the hottest jock in her California high school. Viewers come to know many of the supporting characters in Devi’s life: her two best friends, her Indian frenemy, her academic nemesis, her perfectionist mother, her gorgeous and brilliant cousin, and her father, who dies in the series’ first episode — leaving Devi to sort out her grief with the help of a caring and capable psychologist, Dr. Ryan.

Notably, the characters in “Never Have I Ever” hail from a variety of ethnic and racial backgrounds, and the religious identities represented include Hindi, Muslim, Jewish and Christian. Devi’s crush has a father of Japanese descent, while his mom is Caucasian; other friends are Chinese and African American. Her psychologist, the school principal and a doctor who is her mom’s love interest are also African American. Viewers see the diverse beauty of society and can appreciate the differences that make us special.

The show gets so much right about school cliques, ambivalence about one’s culture, academic pressure and society’s definition of success. What’s more, the characters manage to remain lovable and relatable in spite of their flaws — nuance blends with humor when the show touches on Indian Americans and their perceived perfectionism regarding excellence in school. Throughout the series, Kaling balances respect for Indian culture with good-natured jabs about thriftiness and other immigrant stereotypes. I was particularly moved by a scene in which Devi attends an Indian festival, and she seems to grow and appreciate the Tamil language, gods and blessings that make her life richer and fuller. After Devi has a conversation with a college student who previously had scoffed at his background, she considers how quick she was to reject her cultural blessings and starts to embrace them.

While all of the show’s diverse characters seem balanced with strengths and weaknesses, there’s one huge exception: The Jewish characters are portrayed mostly as stereotypes in one very tired dimension.

When it comes to the Jews we meet in “Never Have I Ever” — and there are many, from her former crush-slash-rival, Ben Gross, to her teacher Mr. Shapiro — we never see them gather with their families for a peaceful Shabbat dinner. There are no gentle Yiddish lullabies, no intellectual excitement for Jewish history, no Hebrew language to bring depth and dimension to their high school experiences or their lives. The Jewish characters in the show have no passion for repairing the world — only for winning, consuming and making themselves feel good.

In the first season, Ben’s Jewishness is boiled down to his over-the-top bar mitzvah, his tendency toward conspicuous consumption, his ruthlessness and competitiveness in school, and his smug disdain for others. As one-dimensional as this portrayal was last season, it’s even worse in the second season, which premiered earlier this month. That’s due to the increased number of Jewish characters in season 2 — all somewhat caricatures — that contrast markedly with the other characters who are presented with increasing nuance.

Take kindhearted and cool Eve, whose Jewish identity seems incidental and non-defining, unlike her identity as a lesbian. She reveals that she is Jewish only when another character falsely accuses students of antisemitism because they disagreed with his idea for a group project.

While Ben’s story arc in the second season is somewhat redemptive — he demonstrates occasional kindness as he and Devi become genuine friends — his girlfriend, Shira, is portrayed as an unrepentant Jewish princess. Her life consists of posing for Instagram photos, ordering Ben to let her pop his pimples, spreading gossip and discussing her daddy’s sponsorship of the school’s winter dance. Shira and her heinous whine never evolve.

Malcolm is another minor Jewish character who makes a brief appearance as Devi’s friend Eleanor’s boyfriend. We learn that, in addition to starring in a television series, he attended Hebrew school with Ben when they were young. Malcolm is superficial, self-involved and, worst of all, he tries to drive a wedge between Eleanor and her friends. He is a controlling boyfriend, straight out of cautionary high school health class videos, whose character becomes less likable as the series progresses.

Even the Jewish teachers at Sherman Oaks High are one-dimensional and clownish — witness Mr. Shapiro’s weird detachment from reality. He can’t believe the school district requires him to give written exams to his students, shows little self-knowledge and showers himself with praise about his brilliance as an educator.

A scene that takes place in Mr. Shapiro’s class, Facing History, is a prime example of the unevenness with which the Jewish characters are portrayed in the series. Devi’s crush, Paxton, helps his classmates “face history” by inviting his Japanese-American grandfather to school to discuss his family’s imprisonment in an internment camp during World War II. This deep and scarring injustice is treated with gravitas, as it should be. But when Ben makes a presentation about the 1911 Triangle Shirtwaist Fire, it’s all just background for a joke about how lucky the world is that his ancestor missed work that fateful day — so that ultimately Ben could be born. His connection to history is meaningful only because it resulted in his eventual existence, and not because this tragic event led to tangible, real-life safety improvements for factory workers.

I’m glad I watched “Never Have I Ever.” It is an intelligent comedy that examines powerful topics regarding teenage life in America — feeling like an outsider, coping with grief and disappointment, and embracing one’s sexual and cultural identity with joy and curiosity. But when I think about all the young people watching this program, I feel disappointed by the lost opportunity to present Jewish characters with a diversity of experiences and personalities.

I’m not asking Kaling to present some sanitized vision of Jews, with characters who spend all their time doing acts of tikkun olam (repairing the world) while humming Israeli songs. But I don’t think it’s too much to expect a little nuance in the portrayal of Jews. As humans, we look for ourselves in art, literature and film — and we are changed by our encounters with these stories and images.

Moral education occurs in many contexts, and teenagers, like all of us, are affected by the television shows they watch. Maybe Kaling knows hundreds of diverse Jews, and she is making fun of just a few in this series. But there are plenty of young people who don’t know any Jews at all — and if the only Jews they are meeting (even on TV) are superficial, selfish and greedy, then that is the image that endures. Not every Jewish character in “Never Have I Ever” has to be perfect, but would it be so hard to have a proud Jewish character who is not off-putting?

Here’s an out-of-the-box idea. Maybe Kaling could add a witty female rabbi to round out her cast in a third season? Ben, Shira and Malcolm could benefit from a rigorous Hebrew school curriculum with a focus on character and social justice. I would also suggest that the students participate in an elective examining the portrayal of Jews in movies and television. There’s quite a bit of room for improvement in that field — as Devi herself would say, “Obvi.”