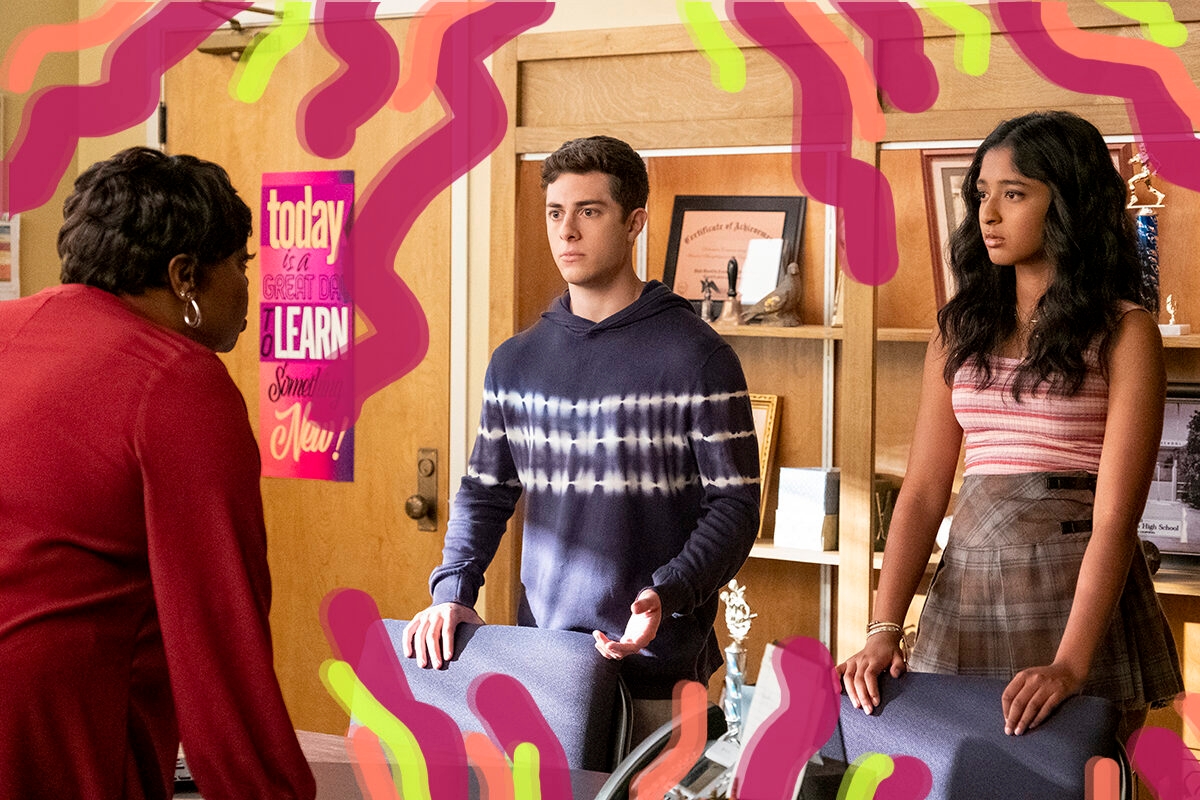 NEVER HAVE I EVER

After binging the new Netflix series Never Have I Ever, my heart and brain were filled with a myriad of feelings. I was giddy and grateful for the fact that this wondrous, celebratory show exists, and I was particularly thankful that it came exactly at the time we needed it most.

Never Have I Ever is a truly reifying show. It validates the chaos and loneliness of the teenage years and, at the same time, it celebrates both puberty and minority culture in a way that is deeply human and funny. In short, it is sure to resonate with anyone who has ever felt “other.”

Never Have I Ever provides sharp insight on what it is like to be a minority in America, but it is not the slightest bit didactic or moralistic. It is first and foremost quality entertainment for all ages. The show is about an Indian-American teen who is navigating high school life while reconciling with the loss of her father with her budding sexual identity (yes, there is teen horniness and quite a few expletives — so if you’re prudish, be forewarned). This very much non-teen (though my mood swings beg to differ) laughed heartily, and may even have shed a tear or two (or three).

The protagonist here is Devi Vishwakumar, played by Maitreyi Ramakrishnan, who brings the perfect combination of chutzpah and sweetness to the role. Devi is whip-smart and funny, but she also has some serious rage issues. As she enters a sophomore year in high school, she is determined to not be a “loser” and get a boyfriend.

Devi sets her mind on her school’s hottest Insta-famous teen, Paxton Hall-Yoshida. In her fantasies about him, she dreams of him comparing her intellect to Ruth Bader Ginsburg‘s — which, let’s face it, is a pretty dreamy compliment.

What Devi doesn’t realize is that there’s one boy who has been a constant in her life — though, to be fair, he may not realize it, either. His name is Ben Gross, and he’s played by the handsome Jaren Lewison (who may remind you of your very first Jewish summer camp crush). Ben, the son of an entertainment attorney, seems, at first, like your typical high-achieving, “nice” Jewish boy. His family is rich and assimilated, he had his bar mitzvah at the Dolby Theater, and he is an insufferable bragger.

Devi and Ben have a rivalry going back to their early childhood years, and they are vicious to each other. In one scene, as their class studies about the Holocaust, Devi actually tells Ben she wishes he had been killed by Nazis. It’s a line that is jaw-dropping, and honestly, it might have made me want to stop watching the show if it weren’t for the fact that the pair’s relationship had been previously established as totally brutal. (Plus, as viewers know, Devi had already been riding an emotional rollercoaster that day.)

Plus, the incident concluded with complex tenderness. As the two are sent to the principal’s office, Devi gives a heartfelt, tearful apology: “I wish I was a dead body on the 101,” she says, in tears. Ben, for his part, tells the principal he “does not want to press charges.”

Here’s the thing: As anyone who has one or has been one knows, teens can be truly awful. They can say terrible things, like wishing their parents were dead (this happens in the show, too). Never Have I Ever expertly encapsulates the extreme emotions of adolescence. But it also gives its heroes ways out of their awful, self-created messes, and reminds us all that no matter how terrible we’ve been, and no matter how old we are, it is always worth it to apologize, to be vulnerable, and to tell the people in our lives how much we care for them.

After that scene, as they leave the principal’s office, Ben and Devi’s relationship changes. Ben displays tenderness when he tells her he forgives her, when he sees that there’s more going on in her life. In a strange way, Devi and Ben are the only two who see one another as they really are — perhaps because they are so similar. They both have complicated relationships with their parents. Devi’s mom, a newly single parent, is overbearing and controlling, and Ben’s parents are absent and career-oriented. They both feel a strong drive to be high achievers, and they also both feel like lonely losers, though they do all they can to mask it.

A highlight of the series is the entire episode dedicated to Ben — narrated by our favorite Jewish dad, Andy Samberg —  which shows how isolated he feels. But this show is also a beautiful commentary about what it means to be American — and that includes being as a minority with deep cultural heritage, as well as a first-generation immigrant, both of which Devi is.

For us, as Jews, throughout our long and complicated immigration history in this country, we have felt the push to assimilate or to mask aspects of our Jewish identity and tradition. (Of course, the fight to become “more American” can be a precarious one, as both dystopian TV series and real-life anti-Semitic attacks and incidents demonstrate.) Yet Never Have I Ever depicts Devi’s Indian heritage as a source of comfort and strength. Even if Devi is thoroughly American, she prays to Hindu deities for a boyfriend.

Above all, Never Have I Ever demonstrates the pride we should all feel of our respective cultural and religious heritages. In the episode titled “Never Have I Ever Felt Indian,” Devi is reluctant to go to Ganesh Puja, the Hindu festival celebrating that deity — she wants to be a “cool American teen,” after all. But by the end of it, she is smiling. Is it because her crush told her she looks “cool” in her sari? Is it because Pandit Raj, their community’s lovable spiritual leader, promises to ask the deities to grant her admission to Princeton? Perhaps a bit of both.

When I watched this scene, I couldn’t help but think of teens reluctant to have their bar or bat mitzvahs, or children complaining about Hebrew school, or how Jewish holidays sometimes feel so unhip and lonely when no one else you know celebrates them. But the truth is that there is beauty and meaning and support out there if we know where to find it. That’s especially true for teens, who are (understandably) going through an emotional shit show, and Never Have I Ever can help them feel just a little bit less alone and misunderstood.

Whether it’s validating the drama of teenage years, reminding us of the comfort of cultural heritage, or just being fabulously entertaining, Never Have I Ever is doing important work right now, and all of us really need it.