Mom Always Said to Put Cash Under the Mattress. Was She Right? – Kveller
Skip to Content Skip to Footer

Mom Always Said to Put Cash Under the Mattress. Was She Right? 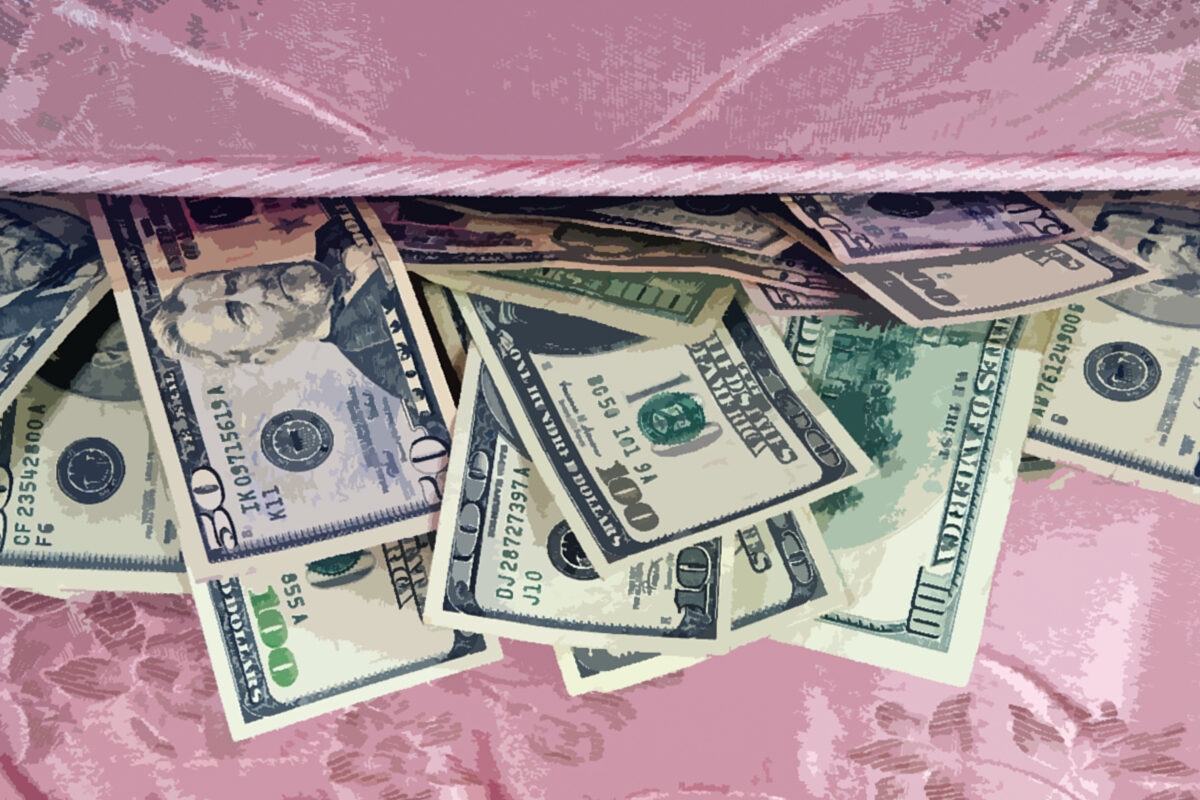 “Keep cash under the mattress,” my mother often told me.

I thought her Depression-era advice was old-fashioned and irrelevant. Growing up in the 1960s, I found it embarrassing every time my first-generation father picked up a penny on the street. He was penurious, a self-made man supporting his widowed Prussian mother in Bedford Stuyvesant. The only way he could study engineering was to excel in school, gaining free admission to New York City’s Cooper Union. My mother, raised in the Jewish Home for Orphans in Jersey City, told me stories about bread lines — meanwhile, we lived in Manhattan amid a plethora of bakeries.

I’m still in Manhattan but everything changed with the pandemic. Sheltering at home, I found it increasingly difficult to find or buy bread, flour, or yeast. For the first time in my life, I looked at every potato as if it might be the last one I’d acquire. The notion of wasting food seemed suddenly sacrilegious.

I heard about wealthy families fleeing cities for more remote areas, withdrawing thousands in cash from the bank — just in case.

“Should we take out some cash from the ATM?” I nervously asked my husband, considering a more modest amount.

“You think the banks are going to crash?” he said incredulously, as if I’d predicted a dystopian future only seen in movies. After all, Pandemic, a 2016 horror/action film, was now trending on Netflix.

Keep cash under the mattress.

Soon enough, however, we couldn’t even use cash. Vendors in my local greenmarket converted to taking credit cards, in order to avoid the exchange of bills and possibly virus germs. Today’s bread lines are scores of people, six feet apart, waiting in lines that stretch for blocks to get into Trader Joe’s. I am luckier than many in my city who are increasingly unable to afford food. I’ve seen long lines outside of food pantries, too, tying me even closer to Great Depression hardship stories my parents used to relay.

When I found a one-quarter-ounce square packet of yeast in my pantry, I was thrilled to discover it wouldn’t expire for two months. It felt like a huge gift, as if a splendiferous bouquet of flowers had just made a surprise delivery from a long-ago lover. I downloaded Jim Lahey’s no-knead bread, the most viewed recipe on NYTimesCooking.com. My husband and I baked the début loaf of our life and marriage, calculating how many more we could eke out of our small precious square packet of yeast.

Eighteen hours for the dough to rise and re-proof, 40 minutes to bake. While waiting, I thought about family trips in France, where I always started my day at a neighborhood boulangerie: fresh, crusty, affordable, the antithesis of America’s squishy packaged bread. The French Revolution began in 1789 as a hunt for arms as well as grains for bread. Voltaire claimed that Parisians needed only comic opera and white bread.

By contrast, all I needed was my Prussian grandmother’s home baking. Initially brought to the U.S. as a servant for a wealthy Jewish family, she lived with us in a basement apartment. She had a refrigerator filled with yeast dough in pottery bowls, allowing it to rise over the course of the Jewish sabbath, which she observed devoutly. On Sunday mornings she was ready to begin a day’s worth of crafting danish, strudel, and rugelach. I woke up dreaming I was living in a bakery. I was.

Now I know that bread baking requires foresight and, of course, yeast, a precious commodity. I’m proud to master such an ancient skill, no longer viewing it as a privileged hobby but truly the staff of life in lockdown mode. Bread baking is not really labor intensive, but needs planning, time, and patience. Warm bread is always so comforting. Especially in the pandemic.

Crust crackling in my mouth, I worry about the future, especially the economic fallout. My parents were scarred by the Great Depression. My mother was placed in foster care until the age of 6, when she was moved into the orphanage. She said she grew up without love or affection, only discipline and routine. Yet she studied Hebrew every afternoon and learned to play piano. On weekends she attended synagogue services and Sunday school. Her father, in a sanatorium due to tuberculosis, died when she was 10; Mom recalled seeing him only a couple of times. These tales of quarantine and isolation used to seem so draconian and archaic. Not anymore.

Mom’s penniless first-generation widowed mother made and sold bootleg gin in a bathtub during Prohibition. She scrubbed floors in an office building at night. She took in boarders to earn rent money in her Jersey City railroad flat that had a bathroom in the outside hall. She didn’t always show up on monthly visiting days at the orphanage. Mom moved back home in high school, yet she never fully recovered from feeling abandoned.

“We’re all going to suffer from trauma,” my 26-year-old daughter recently predicted on FaceTime. She’s working from home in her apartment across a river, a borough away that once seemed close but now feels remote. We text each other cheerful photos of hot breads emerging from ovens, momentarily forgetting that we’re baking our own because we’re staying home to flatten the curve.

Sometimes she shakily blurts out, “I’m afraid I’ll never see you again!” I reassure her that we’ll get through this, keeping all doubts to myself.

The first time I realized I couldn’t always protect my only child was right after 9/11. We lived a few miles from Ground Zero, and every night at bedtime I promised her we were safe. She was too young to know if I were telling the truth or just pretending. Now she tells me not to go out, trying to protect me. I tell her to take Vitamin D, wear a mask when she leaves home, and reassure her when she slides into a short stint of hopelessness.

“If you have your health, you have everything,” was another line my mother spouted like a mantra.

“By the way,” my daughter says, “my stimulus check arrived.”

“Put it under the mattress,” I blurt out.

“I can’t. It’s direct deposit into my bank account.”

We have a pandemic laugh together… apart. And then it’s time to mix another batch of flour and yeast.