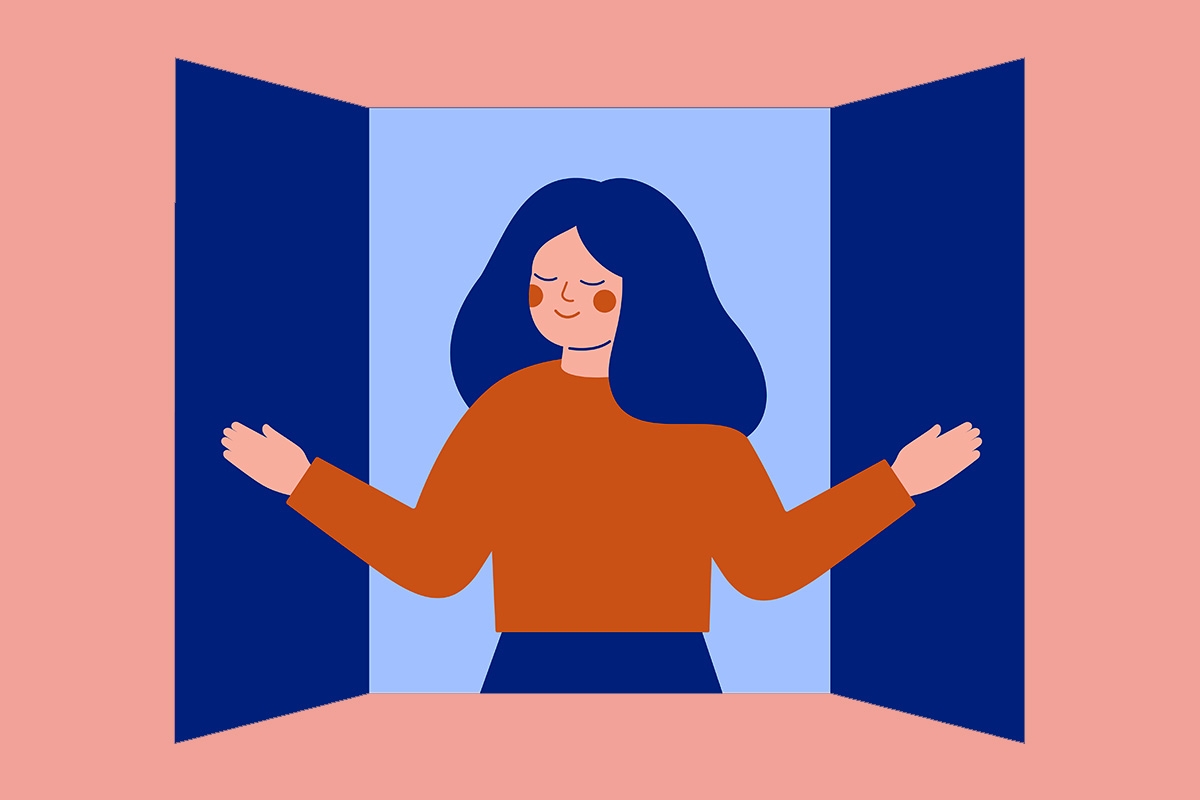 At 44 years old, I was living a typical middle-class suburban life in New Jersey. This included a husband of 19 years, two kids, two cars, two cats, and a house on a corner property. By most accounts I was content, occasionally happy, even. I was busy planning my daughter’s bat mitzvah after recently becoming an adult b’nai mitzvah myself.

At the time, I didn’t realize my decision to celebrate this Jewish milestone would catalyze enormous transformations in my life.

I grew up in a Conservative Jewish family, though we lived in an Orthodox neighborhood. I learned about Judaism more by watching it from my living room window rather than actually participating in it. Because I wasn’t born a boy, I wasn’t given the opportunity to attend Hebrew school or become a bar mitzvah like my male peers. Adult me corrected this, along with the erroneous belief that I wasn’t “that Jew” — meaning we weren’t the kind of Jews who, say, put up a sukkah on Sukkot. When I said that to the rabbi of the Reform synagogue I hand-picked to guide my kids and me through our Jewish educations and respective b’nai mitzvahs, she simply said, “Why not?”

Her plain simple words struck me deeply. I thought to myself: Indeed, why not? We constructed our very own sukkah that afternoon.

Aside from having a bat mitzvah in my 40s, I was essentially a faithfully married woman living an otherwise predictable life. My charge was to balance my part-time work as an occupational therapist with being present for my kids. My mom resume included playdates, PTO meetings, class mom, adult house parties to sell gourmet food, kitchen gadgets, costume jewelry, scrapbooks, and even sex toys. There were lunches with other part-time employed and stay-at-home moms and Thursday night mah jongg. All standard stuff for the Northern New Jersey neighborhood I called home, despite it never feeling as warm and fuzzy as the word home ideally conjures up.

Something was missing, but whatever it was, I couldn’t figure it out.

In the midst of this “normalcy,” between picking out pictures and music for the photo montage, invitations, flower arrangements, and writing a speech conveying my immense pride for my daughter, I was getting to know a new friend. There were phone chats and occasional dinners — nothing out of the ordinary, except the level of intrigue, which far surpassed any I had experienced with another person in many, many years. Still, things remained status quo — until, one evening, she unexpectedly kissed me.

It was as if I was unaware I was standing in a dark room, until suddenly it became illuminated. That kiss became a defining moment in my life — the moment I experienced joy in a way I never had before. The moment I would replay in my mind repeatedly just to relive that joy. The moment that would cause me to crash when I realized what it might mean, and the impact that would have on my husband and kids. That moment when everything before it made sense, and everything afterwards was inexplicable… Or was it? I couldn’t be gay, I reasoned. I was married for nearly two decades. I had kids, a life whose path was clear. I wasn’t “that person.”

But then, I could almost hear my rabbi’s voice: “Why not?”

I looked at my new friend in a way I had never looked at a woman before, and I thought to myself, Indeed, why not?

Those same two words that gave me the go-ahead to be any kind of Jew I wanted to be began to turn my world upside down. Who was I? Had I been wrong all along? With my daughter’s bat mitzvah fast approaching and a secret lurking like a grenade in my pocket, ready to explode at any time, I set out to find answers to questions I never thought to ask before. My quest began in Manhattan, where I searched for a gay rabbi to talk with; it included stealing increments of time in parking lots to read a books I had kept hidden in the trunk. I met with strangers — people who I’d blindly reached out for help — and I attended support groups, where I discovered that my later-in-life realization is a rather common phenomenon.

Like most, this process of self-acceptance and coming out unfolded slowly and, at times, painfully. I likened the unexpected journey to being in a mud pool, feverishly trudging along while desperately trying not to get pulled under. A year passed before I felt more confident in those steps I was taking which included therapy, on-line chat groups for married women with a same-sex attraction, workshops for late bloomers, and immersing myself in the gay community whenever possible to build a scaffolding of support as well as forge new friendships.

Early in my discovery process, I shared with my now ex-husband my struggle with sexuality. It was understood but initially unspoken that we would ultimately separate, but we decided to maintain the status quo until after our daughter’s bat mitzvah. I came out to my children on Black Friday; it was the hardest thing I have ever done. My ex and I had an in-home separation for one year before he moved out of our family house. What began as an amicable separation soon morphed into my worst nightmare: I was served divorce papers on the morning of Rosh Hashanah. Unbeknownst to me, he had initiated the process three months earlier. He stayed connected to the kids but our relationship was severed.

When I knew for sure I would survive this tsunami of emotional upheaval and change, it seemed fitting to do something to mark the moment. So, yet again, I did something I previously never imagined doing, because I wasn’t “that person.” In fact, it was the one thing my mother repeatedly had told me not to do: I got a tattoo. (We had never discussed sexuality or drugs, but, inexplicably, it was very important to my mom that I knew that tattoos were forbidden.) After such an unexpected and complicated journey, however, I decided that a badge of honor was warranted. I wanted a mark visible only to me as a reminder of the unlikely path that I ultimately embraced, and the courage I didn’t realize I had until I embarked on it.

And so, one year to the day I came out to my children —  thus changing their story forever —  I tattooed four small muddy lion paw prints on my body. The significance of lion prints was that I related to the descriptions of lionesses as being independent, fierce, loyal, and brave. I was beginning to recognize my own courage. As for the paw prints, there are two muddy, messy ones and two that are lighter and cleaner —  symbolizing my time in, and emerging from, the mud.

When my ex broke his promise to coparent with me, I transitioned yet again — this time into a single mom. Depleted from managing every aspect pertaining to my kids — plus managing our house, my job, and another b’nai mitzvah, as well as myriad other family obligations —  I found renewal in an Israeli conference room during an inspiring interpretation of the weekly Torah portion, Lech Lecha, the same portion my daughter studied for her bat mitzvah three years earlier. This unique journey wasn’t just a call to “go forth;” but a call to “go into yourself,” to take a journey to the very foundation of your being, to choose to leave what you know in order to discover who you really are. This represented my personal journey inward. Upon returning home from Israel, I did the second most impulsive thing of my life: I tattooed the Hebrew letters for Lech Lecha next to my last paw print. As a wise rabbi once told me: “Why not?”