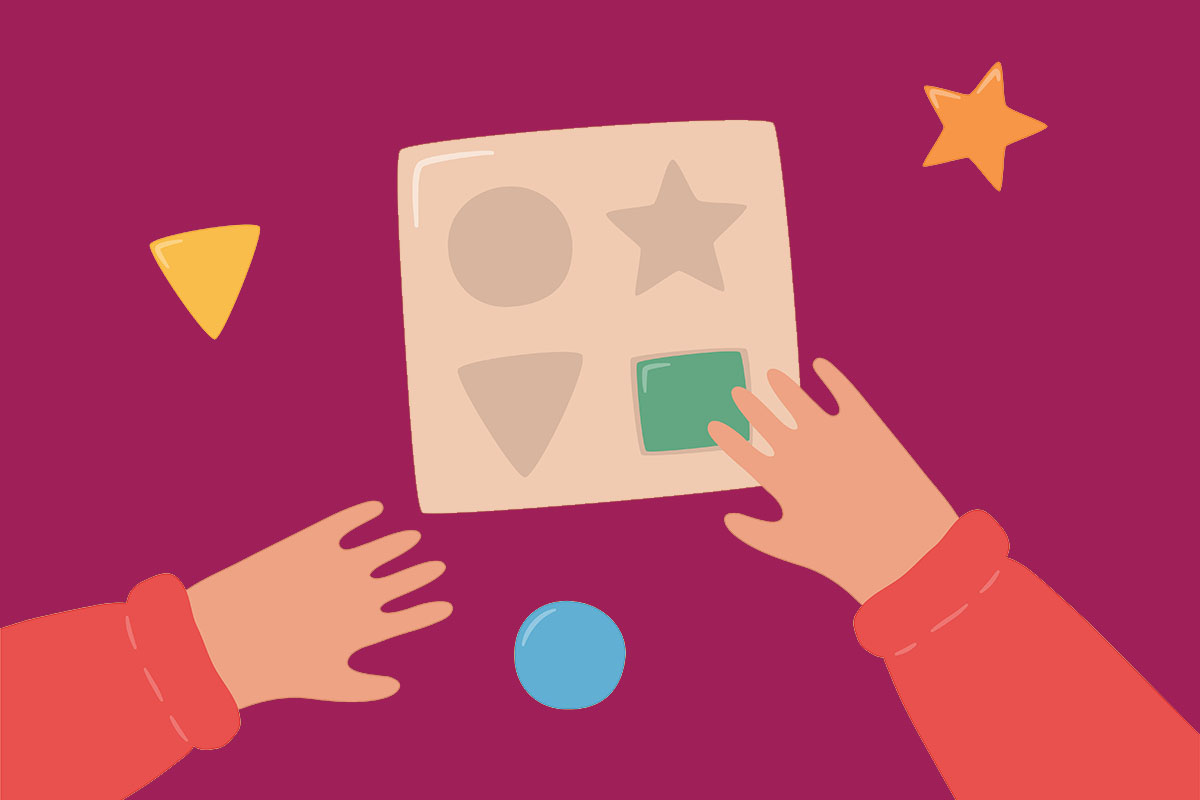 You know that classic game for kids, the one with a box that has cut-out shapes on the sides, and the object of the game is to fit the right piece into the matching hole? Circles into circles, triangles into triangles, stars into stars?

Well, I was playing that game with my 18-month-old son, Shalom, the other day. At first we had a good thing going: He would pick up a shape, try to put it into a hole, and after it didn’t work, I would rotate the box so that the matching cut-out was directly in front of his hand. He would then push the shape with ease through the hole and gleefully cheer for himself. It was big smiles and lots of excitement, shape after shape.

That is, until he picked up the last piece.

I saw that mischievous look in his eye as he reached for the square. At first, he tried stuffing it into the star cut-out. I knew I had to turn the box to make it work, but he would have none of that. He wanted to do it himself. He held the box still with one hand and fiercely tried to force the square shape into the star hole with the other. Seeing his frustration, I tried once again to rotate the box, but he snapped with a loud “NO!”

Suddenly, like a sneaky thief — or, um, a defiant toddler — he lifted the lid and dropped the square piece into the box.

Or was it? He certainly seemed satisfied with the results, and ready to move on. I, on the other hand, sat dumbfounded on the floor, holding a child’s toy that had inadvertently opened a Pandora’s box.

I found myself worrying: How could my son give up so easily? Yes, he accomplished the job of putting the other shapes into their proper slots (with my help). But why, this final try, did he give up and bypass the process? Why did he suddenly take the shortcut? Did his sly little move mean he might grow up to be a lazy adult, a copout, a cheat?

Or maybe I was looking at it backwards: Maybe he was already on the road to becoming a brilliant problem solver! True, I was impressed that he discovered a clever workaround. But more than that, I felt dismayed. My son had taken the low road, the cheap way out… and he was declaring victory? Not cool, kiddo!

This brief period of play time really got me thinking. Is everything about the end result, and reaching the finish line? What about the journey itself — the process, the moral choices, how we conduct ourselves along the way? What is the “final destination” anyway?

Watching Shalom drift off toward the trains, I began to think about all the times I played this game with my other children over the years. I also considered my own life path, my choices, the big changes I’ve made.

Last year, my family and I I moved cross country, from Chicago to Phoenix. I also closed down my martial arts studio. Very quickly I found myself living in a new state, in a new community, and struggling with an erosion of identity. Basically, I’ve been trying to figure out what shape I am, where I belong, and how I fit in.

I had always been known as the Orthodox Taekwondo master, the athlete, the fitness trainer, the yoga instructor, the writer, the kale-smoothie creator, the one who gives birth at home and buries her placentas in the backyard. I still felt that person in me, but as all these changes occurred, that image of myself started to recede. I felt myself evolving and changing shape, re-aligning around the edges. Try as I might, I no longer fit into the cozy cut-out that once comfortably fit and proclaimed my identity.

Seven months — and counting — of Covid-19 lockdown and distancing has continued to spark endless adaptations; my sense of self, rather than stabilizing after our move, continues to morph.

I sometimes feel like Shalom, trying to shove a circle into a diamond shape. Trial and error, over and over. I understand his frustration. I, too, want a shortcut. I, too, want to blow the lid off the box, jump right in and have my destiny reveal itself.

But, then again, why would there be so many distinctly shaped entryways if the game is just to bypass them all and barrel in through a trapdoor that is indifferent to individuality? Surely every shape has a corresponding hole that’s right for them?

These days, new life circumstances, new friendships, and new approaches in my business are testing me. As I follow the call to explore new terrain in my career, to pivot in order to keep up with our ever-changing world, to pursue deeper layers of my unfolding dreams, a child’s game reminds me that each turn on the path is a rite of passage and a portal to self-discovery. Each twist promises potential with potential risks of failure and exhilarating rewards of success.

I yearn to arrive at my new destination, to find my way into the box of shapes, confident, distinct and clear. With God’s help I will continue to search for my new path, until my evolved form fits seamlessly through.

“Stay true to yourself,” I say to Shalom as I lift him up and give him a kiss, hoping to myself he’ll discover that life is too interesting to take the easy way out. “Thanks for the inspiration. Let’s play this game again tomorrow.”