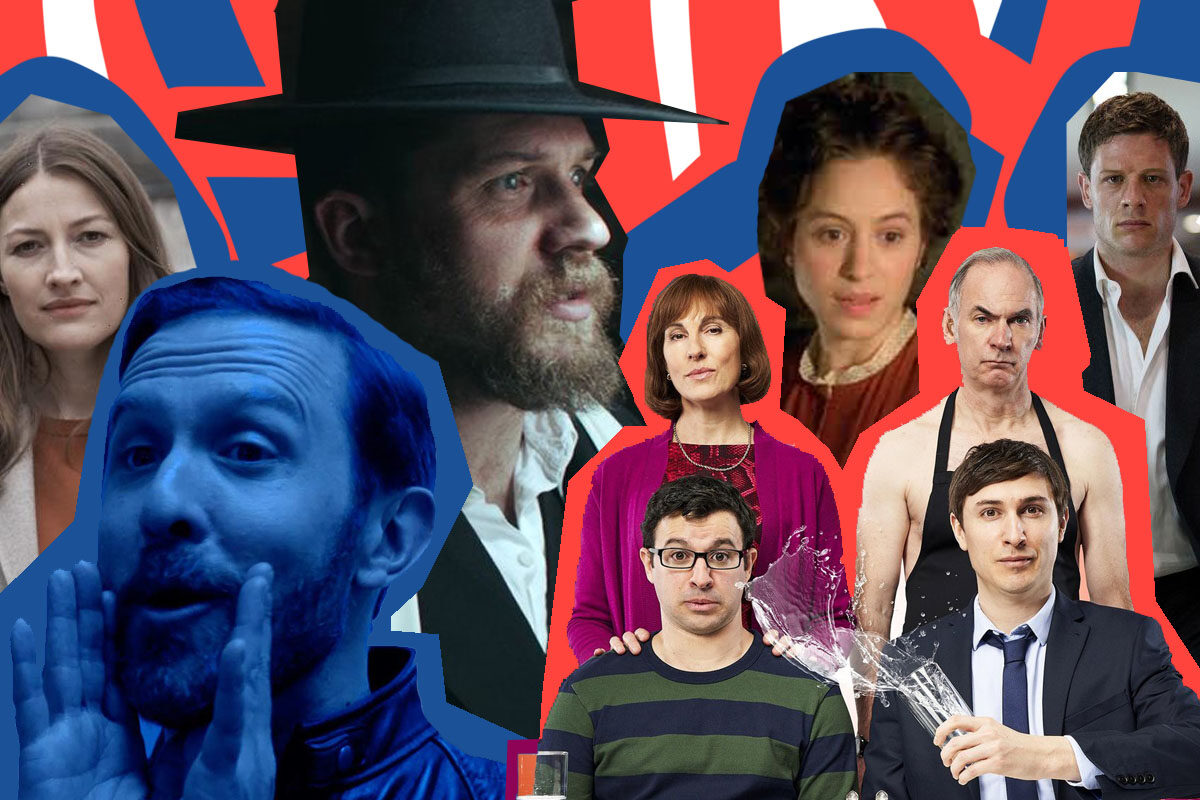 British shows like Fleabag and Killing Eve has really made it big in America these last few years, snagging some well-deserved Emmys and Golden Globes in the process. And some of the best American TV comedies are actually adaptations of British shows, from Veep to Shameless (formerly starring Jewish actress Emmy Rossum), to, we hope, the upcoming adaptation of the British comedy Miranda, starring Mayim Bialik.

Still, there is relatively little Jewish representation in British television. This shouldn’t come as a surprise — Jews are even a smaller swath of the population in Britain than they are in the U.S., numbering at about 250,000. Nonetheless, some would argue that British Jewish actors are among the country’s most exciting talents, even if they rarely play Jews. Examples include Rachel Weisz (who did star in the very Jewish Disobedience),  Sophie Okonedo (my queen!), to Daniel Radcliffe (who did play both Allen Ginsberg and Israeli entrepreneur Yossi Ghinsberg in films), to my favorite Jewish dad and actor, Jason Isaacs.

But in the last decade or so, Britain has debuted some exciting Jewish representation in TV —  one that isn’t just about stereotypical portrayals of Hasidic Jews, nagging Jewish mothers, or the butt of bad, borderline anti-Semitic subplots (I’m looking at you, Grandchester). This development is mostly thanks to Jewish creators who have drawn upon their family’s stories, histories, and personal experiences and made excellent television in the process.

So if you’re looking for some new things to binge-watch, here are some great Jewish shows and characters that have recently come out of the UK.

I’ve worked in Jewish media for more than a half-decade, so I was thrilled to find out about TV series about a Jewish reporter for the fourth-largest Jewish publication in Britain, created by Jewish actor and TV maker Gary Sinyor. Unfortunately, I soon discovered that this show is kind of an extra-Jewish/British version of Curb Your Enthusiasm. While that will certainly be a boon for many, it was a huge drawback for me, as I cannot stand the vicious, self-centered humor of the show. (This sucks for my husband, who loves Curb, and who gets yelled at every time I can hear him watching it.) I truly have an allergic reaction every time I see Larry David (aside from maybe these super cute photos of him as a young man).

I did manage to stomach a few episodes of The Jewish Enquirer, however. While I did not enjoy its gender dynamics and its flaunted lack of political correctness, I did appreciate its Jewish jokes, from circumcision jokes to the main character and his best mate, who attempt to pick up women at Jewish charity events and kosher aisles in the supermarket. My favorite part was definitely the headlines from the newspaper, such as “Chopped Herring, Can It Ruin Your Sex Life?” and “Daniel Craig is Not Jewish – Exclusive.”

Secular Jewish TV writer Robert Popper drew inspiration from his own family for his 2011 show, Friday Night Dinner, which stars some Brits with Jewish heritage, like Tim Rosenthal, whose father is Jewish, and Tasmin Greig, one of my favorite British comedians, whose grandfather was Jewish. The show centers on the Shabbat dinners of the cooky and fictional Goodman family, with its no-nonsense mother Jackie (Greig), often shirtless father Martin, and two single, prank-loving sons.

This show is just the right level of cringy, ridiculous, and endearing. And while it isn’t incredibly Jewish, Judaism peppered into each episode is funny and believable — with jokes about Jewish dating sites and tattoos. It’s truly an excellent, enjoyable distraction for these pandemic times.

This lovely show is not currently streamable anywhere, but I’m holding out hope that it will be (and rumor has it some of it has made its way to YouTube, though I can not confirm or deny that). The show was created by Simon Amstell, a Jewish British comedian and filmmaker who rose to fame as the controversial, acerbic guest (and laster host) of the comedy panel show Never Mind the Buzzcocks, where he had Kelly Rowland yell at him “the power of Christ compels you,” only to angrily respond with “I’m a Jew!”

Amstell is a fascinating, gay, teetotal vegan who grew up going to Jewish day school, a child of divorced Jewish parents. Grandma’s House is loosely fictionalized version of Amstell’s life, where he plays a retired talk show host with an identity crisis. The backdrop to the show is his Jewish grandma’s house, where his grandparents, mother (and her dreaded fiance), aunt Liz (played by Jewish actress Samantah Spiro) and nephew, provide lots of criticism, comedy and occasional love and support. It has warm, Schitt’s Creek-like sensibilities, though it has a bit more bite, and it’s filled with Jewish jokes and references. When his mother’s non-Jewish fiance mentions Mel Gibson at dinner, he’s met with an indignant: “Sorry, we don’t say that name in this house.”

Watch on: Nowhere yet, sadly. But watch Amstell’s comedy special on Netflix, Set Free, where he talks about his Jewish parents and reconciling his queer identity with Jewish spaces.

Starring Hugh Dancy and Jewish British actress Romola Garai (who ironically, plays the show’s non-Jewish co-protagonist who is involved in class struggles), this 2002 adaptation of the controversial 19th-century novel, written by George Eliot, is accomplished and has a fabulous cast. The titular Daniel Deronda is the ward of a wealthy Londoner who, after rescuing a young Jewish woman, makes connections to the local Jewish community and some surprising discoveries about his own roots.

Author Eliot had a long a fascination with Judaism, and after the publication of this book, her last, she wrote in a letter that: “towards the Hebrews we western people who have been reared in Christianity have a peculiar debt and, whether we acknowledge it or not, a peculiar thoroughness of fellowship in religious and moral sentiment”.

James Norton, striking and non-Jewish, plays Alex Goodman, the British son of an exiled Russian crime family, who is drawn into a power battle between the Israeli and Russian mafias. This show has a bunch of amazing Israeli stars, from actor Oshri Cohen to Yuval Scharf, who is about to star in an exciting new Sephardic period show along with Michael Aloni.

Watch on: AMC or Amazon Prime with a Sundance subscription

In this miniseries based on the eponymous John Le Carre novel, Florence Pugh (the successful, fierily gifted actress in Little Women and the terrifying Midsommar, and yes, Zach Braff‘s girlfriend) plays an actress recruited by the Mossad to infiltrate a Palestinian terror group. Alexander Skarsgård plays her Israeli lover, Gadi. The show also features Unorthodox‘s Jeff Wilbusch and a host of amazing Israeli actors.

Watch on: Amazon Prime with a Sundance subscription OR on YouTube Premium

This BBC 2 and Japanese TV collaboration is an ambitious series about a Japanese cop who goes to London in search of his lost brother, a possible member of the Yakuza. He takes a class taught by detective Sarah Weitzmann, played by Kelly Macdonald, who he befriends and recruits to help him. Weitzmann is an absolutely wonderful, understated Jewish character, and she orchestrates a truly meaningful Yom Kippur breakfast dinner for the show’s main characters.

Haji/Giri is a suspenseful, visually enrapturing show, and has two famous fans: the creators of The Marvelous Mrs. Maisel. In a recent interview with The Hollywood Reporter, Amy Sherman-Palladino spoke about how obsessed she is with this show: “It’s the greatest thing we’ve seen in years. I just think it is unbelievably sensational, and we’ve been browbeating all our friends and family — basically, we’re not speaking to you or doing any kind of FaceTime bullshit until you sit down and watch Giri/Haji.”

So what are you waiting for?! Watch it, stat.

Tom Hardy (decidedly not a Jew) plays Jewish gangster Alfie Solomons — based on real-life British Jewish gangster Alfie Solomon — in this period drama about the Irish mafia. Solomons is a total badass, ruthless and invincible, a WWI veteran, and also a man protective of his Jewish community and a giver of tzedakah. Iddo Golbderg, who is very much a Jewish British actor, and a very handsome and gifted one at that (you can watch him in Snowpiercer), also stars in the first season of the show, as does Jewish actor Andy Nyman, who plays Winston Churchill in season one.

There are truly so many great reasons to watc this post-WWI British crime period drama starring Cillian Murphy — the excellent Jewish gangster representation is just one of them.

This dark and complex crime show stars Gillian Anderson as a detective on the hunt for a serial killer. Honestly, I can not resist anything with Anderson in its cast, but this show is particularly compelling. Jamie Dornan plays Paul Spector, the elusive serial killer. When asked in one episode for the origin of his last name, he says: “It’s Russian. Jewish.” While we discover more details about Spector’s background later in the show, it is interesting to have a complex, frightening and alluring Jewish villain in a show, especially one whose villainy has nothing to do with anti-Semitic stereotypes, like greed.