The Maccabeats Wrote a New Song About George Floyd 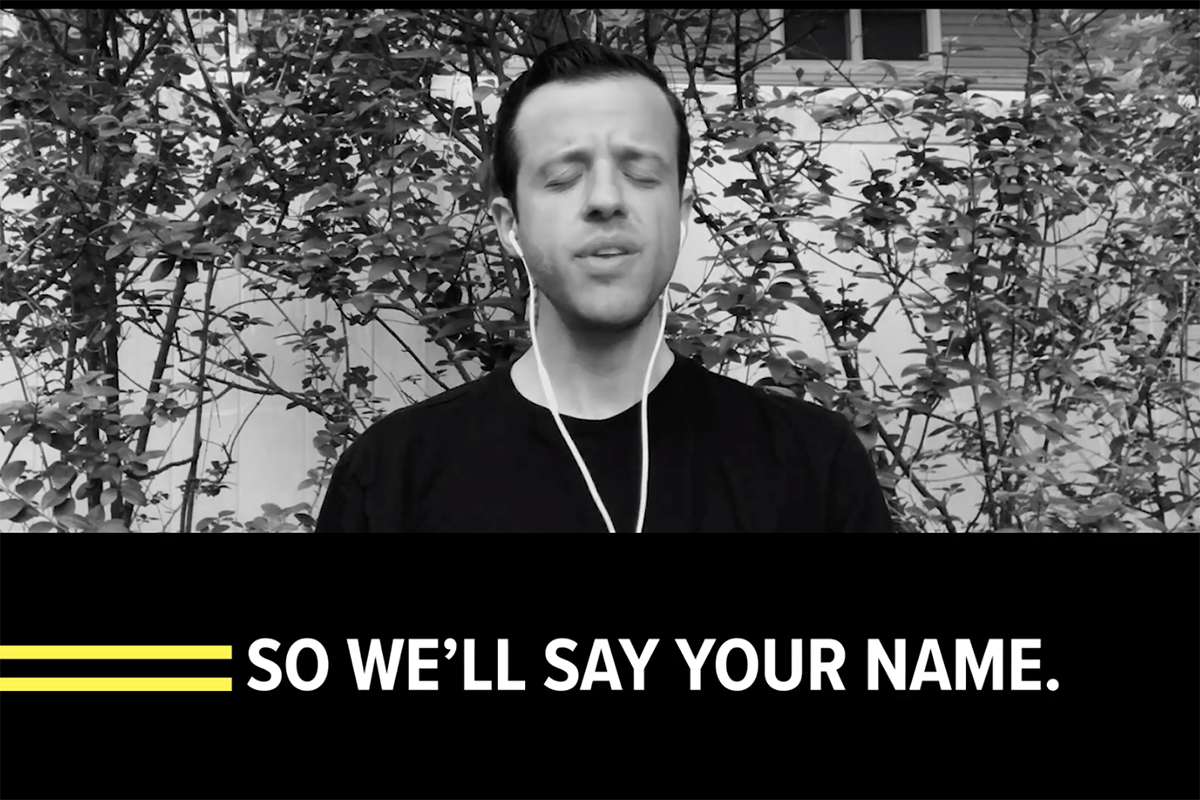 This is what the Maccabeats — the most iconic among Jewish a cappella bands — posted on their social media, along with a fresh new song, written by bandmember Yonatan Shefa, called “Say Your Name.”

The video starts with a quote from Elie Wiesel, “Wherever men and women are persecuted because of their race, religion, or political views, that place must — at that moment — become the center of the universe.”

The video is reminiscent of the band’s other “quarantunes” and their earliest videos — just shots of the various Maccabeats singing the song, looking straight into the camera. But this video has some motifs that allude to the Black Lives Matter movement, using its associated yellow and black color scheme. The two yellow lines are also reminiscent of road markings: “It lets our song serve as our way of joining the protests,” the Maccabeats’ leader, Julian Horowitz, tells me over the phone.

The video ends with an image of a mural painting of George Floyd.

According to Horowitz, “Say Your Name,” which was created over the course of just three days, is “a song of mourning.” As he puts it: “Mourning the loss of a single life, which Jewish tradition teaches us, is like the loss of an entire world. But also mourning the shameful conditions which allowed this to happen, and mourning the losses of so many others under similar circumstances.”

“It’s also a call to action to join the outcry for justice and reforms that seek to prevent these tragic acts from continuing to occur,” he adds. “As individuals, each Maccabeat [there are 13 in total] probably has a different take on how this might best be accomplished, but we’re united in our call for change.”

“Say Your Name” is a beautiful song, and it’s sweet — perhaps too sweet, depending on your musical proclivities — and heartfelt. But when I first watched it, I have to admit, I cringed.

As a Jewish Media Professional(tm), I have written about the Maccabeats for years, though I never anticipated how much they would enmesh themselves into my world when I became a mother two years ago. Starting with their now-classic “Candlelight” Hanukkah parody from 2010, their catchy ear worms bring serious joy small children.

I think there’s a good chance that the Maccabeats may play a similar role in your Jewish parenting world. And while I’ve complained about the lack of diversity in the Jewish a cappella world in the past, I still felt good about delighting in the music of The Maccabeats, with their songs that excite our kids about Jewish holidays, and their gorgeous MLK Day cover of James Taylor’s “Shed a Little Light,” a collaboration between them and the Black a cappella group Naturally 7. (“They’re the best band of all time,” Horowitz tells me. “We’re lucky to be the dust of their feet.”)

But “Say Your Name” left me bewildered. Notably, the song does not say Floyd’s name — which is such an important part of this movement right now, as we march in the streets shouting the names of George Floyd, Breonna Taylor, and countless other Black Americans who were murdered by police.

Horowitz didn’t really understand that specific criticism when I presented him with a few questions over e-mail, though he said he is “always open to learning more”.

“It’s… surprising, not only because George Floyd’s name appears in the title of the video, but also because it’s such a strange misunderstanding about how language, lyrics, and metaphor work,” he says over email. “Our singing a song about George Floyd is our way of saying his name, we thought that was obvious. ”

But that’s not my only issue with this song. Instead of showing the face of Floyd or other victims, the video mostly focuses on the faces of these white-presenting Jewish singers — their feelings and their thoughts.

“I read your questions after I answered, and I think that the undertone was that we are taking the voice away from People of Color or we’re kind of stealing the spotlight,” Horowitz tells me during a follow-up phone call, after he put his two kids to bed. “But I think things can exist simultaneously. I mean, people around the world watched this video of this brutal thing happening, and we processed our reaction to that, and I think that our reaction to that is a valid part of the cultural experience and, you know, our artistic representation of that is also valid.”

Another critique is that the song doesn’t have any tangible calls to action. There is nothing about what the Jewish community can do to be actively anti-racist, both by examining how we treat  Black Jews in our community and how we can fight racism in American society. There is no suggestion of somewhere to donate, no resources to educate yourself, no nothing.

The first time I watched “Say Your Name,” I was about ready to write a scathing takedown. Instead, after having conversations with Horowitz and others, I’ve spent the last couple of days thinking about allyship, virtue signaling, and how white-presenting Jews can meet this moment.

I’ve thought about Gal Gadot‘s “Imagine” video — which so many met with derision — or the recent video of celebrities looking serious and talking about how they take responsibility for racism. (It’s hard to see their drama as frank when their entire lives are built on performing.) I agree with the criticisms that it’s gauche the way these wealthy celebs aren’t taking any concrete actions or not telling the public where they are donating (if they are donating at all).

I still feel like the Maccabeats, as a band, should have put at least a few more concrete calls-to-action alongside their tribute. It didn’t have to be policy ideas for systemic change, but they could have provided an anti-racism education guide for their viewers, or a promise to donate some of the revenue from the video to organizations that foster diversity in the Jewish community.

But I also feel like the Maccabeats’ video is different from these kind of lazy celebrity video compilations. There are a lot of sentiments in the song that signal an understanding of what we need to do right now: there’s a vow to educate our children, an acknowledgment of the work ahead of us to make true change, and a promise to be allies.

After all, part of being an ally means trying and sometimes getting it wrong. Or doing something imperfectly — but daring to put yourself out there nonetheless.

“It’s a first step,” the Black Orthodox rabbi and writer MaNishtana tells me.

“Now anyone who knows me knows I don’t generally stan the Maccabeats. But this right, here? Beautiful. Well done, gents,” he wrote about the song on Twitter.

He also says that he knows that, as Orthodox Jews, some of the band’s family members may not espouse the same views when it comes to unqualified support of the Black Lives Matter movement.

With “Say Your Name,” the Maccabeats certainly stepped out of their comfort zone (and it’s worth acknowledging — they are the only Jewish a cappella band to have done so to date.) Not only did they write an original song that wasn’t even an a cappella song, they took a political stand, for the first time ever. And, judging by some of the (sometimes borderline racist) replies on their YouTube and Facebook page, it wasn’t exactly a popular step with some of their audience.

Did they do enough? Probably not. But they tried — and hopefully, they will keep trying.

I personally don’t think the Maccabeats deserve to get “canceled” over this. But if you enjoyed watching this video, or if you think it’s not enough, make sure you watch other videos with your kids, too. Watch Sesame Street‘s town hall about racism (which Horowitz tells me he watched with his kids), read diverse Jewish books, have important conversations about race with your kids. Listen to Janelle Monae’s powerful “Hell You Talmbout” — which actually shouts out the names of the victims of police brutality. And make sure you’re also listening to diverse Jewish music with your kids — not just the Maccabeats, but Sarah Aroeste, who makes delightful Ladino kids’ music, and Nissim Black, whose amazing Hanukkah song “Eight Flames” can honestly rival any Maccabeats holiday parody.