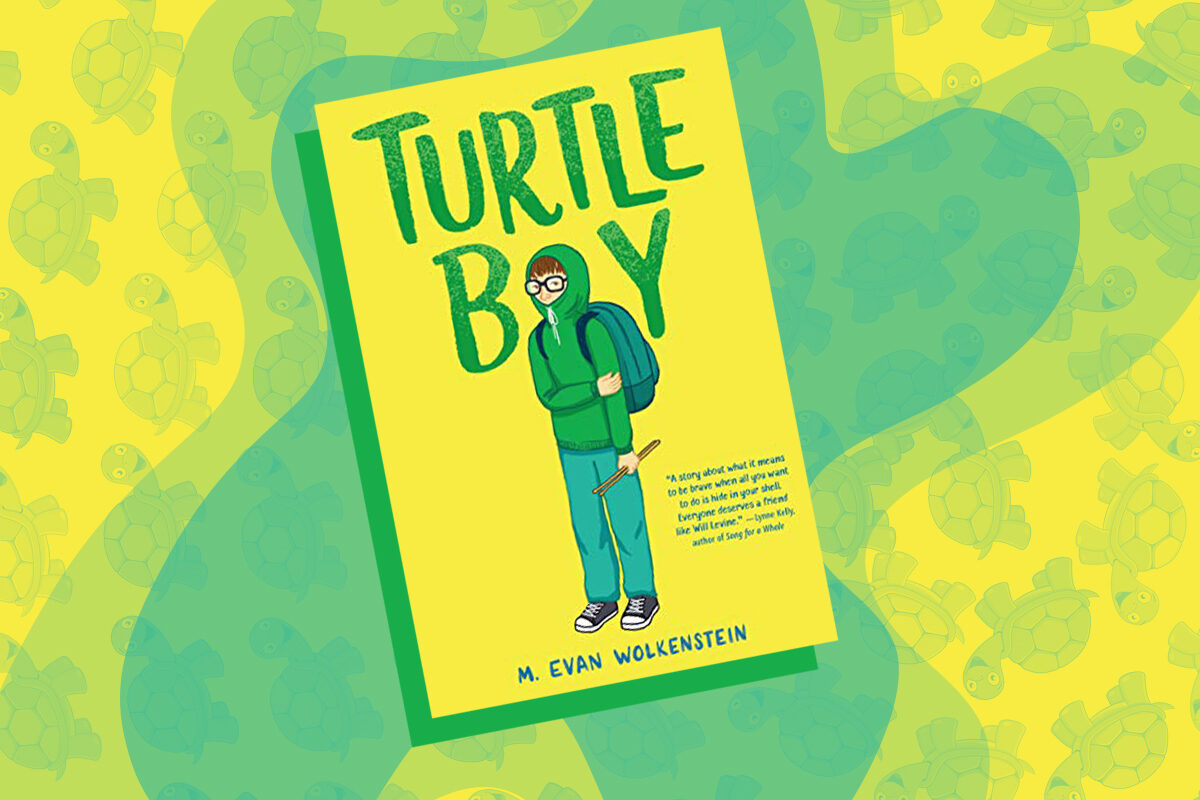 Will Levine, a 12-year-old who is obsessed with turtles, has been given a much-despised nickname at school: “turtle boy.” That undesired title has little to do with his fascination with the reptiles and more to do with his facial difference.

Will, who is also preparing for his bar mitzvah, needs a possibly life-saving surgery to fix his facial difference, but he has a terrible trepidation of hospitals. His father died when he was young, during the course of a routine operation, and he and his mother are still processing that trauma. So, to help Will get over his trepidation, his sagacious rabbi assigns him a mitzvah project: Will has to spend time with RJ, a music-loving teen who is in the hospital with a fatal mitochondrial condition. RJ has a bucket list of things he wants to do before he dies — and he enlists the reluctant Will to help him with it.

Turtle Boy is a marvelous coming-of-age story written by Evan Wolkenstein, who, like Will, grew up with a facial difference. It’s a story about bravery and the redemptive power of friendship, and it’s also the story of how a young boy finds meaning in Jewish customs and traditions, and how they help him deal with loss. It’s also a joyful, exciting book about music and turtles and trying to protect the things you care about most. It’s a perfect summer read for preteens and teens (and for YA and middle-reader loving adults, like myself).

I chatted with Wolkenstein, a Jewish educator, about turtles, Judaism, and how his experience growing up with a facial difference influenced the book.

The idea for Turtle Boy came from a comic you drew. How did you get the idea to turn it into a book?

Turtle Boy began as a comic strip called “How I Learned to Love My Face,” about my diagnosis, surgery, and self-esteem recovery from a minor facial difference in my adolescent years. I drew the comic because I’d been finding that while I’d grown to be at peace with who I am and how I look, still, it felt like my “7th Grade Self” was still in there, somewhere, and maybe he didn’t get the memo that the teasing and the dysmorphia were like a bad dream — evaporated into nothingness. I would find myself periodically troubled by my memories, and I knew I needed to shine a much brighter light into those dark years of 7th and 8th grade, and re-experience what I’d gone through in order to bring it into the light — if not for once and for all, then in a much more thorough way.

In what ways is Turtle Boy inspired by your experience with having a facial difference?

Will is my fictional persona. But Will isn’t actually me. I had two helpful supportive parents, and I was much pluckier, much more outgoing than Will, but Will is the part of me that still preferred to hide in my room than face the scary feelings of the unknown — and in that sense, we all have a Will inside us. This book gave my inner Will a pair of drumsticks and pushed him out into the living world.

Judaism plays such a huge part in this book. Why was that important to you?

As a child, my family had a strong “yiddishe” atmosphere, but we didn’t talk explicitly about Jewish life or texts or traditions — that didn’t happen until I went to Pardes Institue for Jewish Studies,  as a 20-something and came home all crushing on Judaism. Since those years, Judaism has been my balancing pole for fiddling on the roof of my life, so to speak. I teach Comparative Religion and Jewish Literature in a Jewish high school, so I live and breathe Jewishness all day long, but just as importantly, as a husband and dad, as an artist and white man trying to do my part in the fight against racism, I call constantly on my tradition to help me name and focus my path, to challenge me, to guide me, and to give me a structure to understand and improve my world.

For many adolescents, every day is urgent. I was inspired to write a story that would reflect some of the ambivalence that many Jewish adolescents feel about Judaism, but also raise the idea that a Jewish life can assist with that urgency: providing shelter, warmth, light, tools, and hope.

As an adolescent, like Will, I was an introvert who mainly wanted stability and predictability in my life. I didn’t go to camp, I didn’t seek adventure, and I wanted my bar mitzvah to be as simple as possible. I read the Haftorah, I gave a speech, and we ate corned beef sandwiches at home. No party.

While this might have been what I wanted, it might not have been what I needed. I didn’t do a mitzvah project, and years later, when I learned about other kids taking them on, I was a bit jealous: maybe that sort of challenge would have accelerated some of the growth I didn’t do until later in life. Most importantly, it might have helped me turn my constantly disapproving self-attention onto the needs of others. That is a wise thing for anyone to do, and so that is why I made Will take on a mitzvah project he would hate: meeting a punk rock drummer a few years older than him, in a venue that Will would be terrified of, to do adventures he is not cut out to do, to help someone he doesn’t even like.

Your book has been compared to Wonder. Did you read  it and what was its impact on you?

Wonder is a beautiful book about an extreme situation: a boy whose face cannot be ignored finds a way to join the world outside his bubble. Reading it, I related to Auggie in some ways. I also had a facial difference, I was afraid of life outside the bubble of my family, close friends, and familiar surroundings. On the other hand, Wonder left me wanting: because of the extremity of Auggie’s facial difference, his main challenge is mainly for him to show up and stick it out.

After reading it, I found myself wanting to write about a protagonist who takes on increasing challenges, who has to make some difficult decisions, and who transforms as a person.

In today’s world, even as we take up the fight to end the oppression of people with identities and characteristics that target them for violence, we’re also becoming more aware of people who struggle beneath the surface. As a teacher, I hear many stories about the painful worlds of students with non-obvious disabilities, with hidden chronic illnesses, and with secrets that torment them — but which no one knows about. These “invisible kingdoms” of pain informed Turtle Boy because the loneliness of “passing” while also feeling different — and only occasionally being treated cruelly — creates a nuanced and complex form of sadness. And the pathway through that sadness is long and twisty.

My facial difference was subtle enough that I could “pass” but pronounced enough to mark me for teasing and bullying. That sense of liminal identity led to complicated questions: Am I like others or not? Who notices me and who doesn’t? Do I want to be invisible or to be seen? Struggling to answer these questions is at the heart of Turtle Boy’s plot — but also fundamental to every single adolescent’s life.

Can we talk about the turtles? I love turtles! What kind of turtle research did you do for this book?

Before Turtle Boy, I knew very little about turtles. I had a lot to learn, so I used the usual 21st-century tools: YouTube, Twitter, internet research. But, I also deployed a resource delightfully old-school: Mr. Kupcho, my 6th-grade biology teacher. He was thrilled to learn that his nerdy student from thirty years ago was now a nerdy grown-up, writing novels, and that one of the characters was based on him… and he answered many questions about turtles in general.

What are you hoping readers will take away from Turtle Boy?

I want readers, especially young readers, to know that they are not alone. But more than that, to consider that they have something within them that, if they can attune their ear to it, can propel them to heights they secretly crave. And in our search for friends and love, we seek someone who can hear that still, silent voice within us — maybe more clearly then even we can hear it — to surround ourselves with people who will push us to bring that music into the world.

You can find Turtle Boy Amazon, Bookshop, and the Penguin Random House website.

Adam Sandler Needs a Hip Replacement. Why Do I Suddenly Feel So Old?

How Sukkot Rebuilt My Family