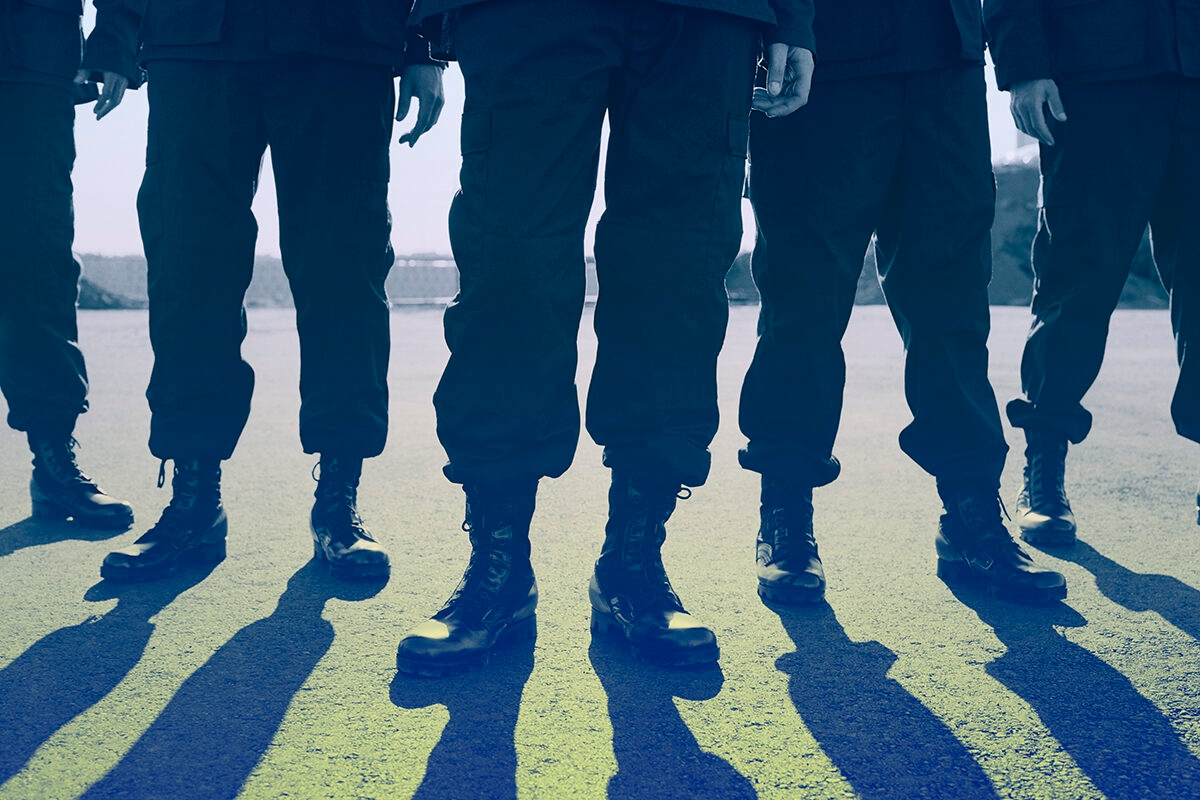 My son N began his army service in late March in an elite combat unit. I am not allowed to give details or post any photos of him on social media. He is working very hard but is happy.

Because of coronavirus, we missed out on the traditional goodbye at the IDF’s induction center on Ammunition Hill in Jerusalem. The whole extended family comes to say goodbye to the new recruit, early in the morning, often wearing T-shirts with the new soldier’s name on it. The fathers of the new soldiers give them bear hugs and reminisce about “when I was in the army;” the mothers sob and cry, sometimes at full volume; the siblings look bored but summon up enough energy for a hug as the new recruits get on the bus. It feels like you’re sending them off to camp, but this time it’s camp with guns.

A few days before N’s draft date, we got a message that nobody would be allowed into the induction center, so I took him by myself. However, this being Israel, in many cases the whole family came and simply moved the celebration to the parking lot.

A few weeks ago, N told us that his swearing-in ceremony would be broadcast on Facebook at 5 a.m. after an all-night march. Ironically, I didn’t attend either of my two older children’s swearing-in ceremonies either: My daughter was in combat intelligence and parents were not allowed to visit the “secret” base, and my older son, a paratrooper, was inducted at the Western Wall, but we were in Italy on a long-planned and non-refundable trip. (I am grateful to my brother and sister-in-law who attended and sent me a video.)

Of course, this time around, we all got up early to watch N be inducted. But because he is in a special unit, it was filmed only from the back, and I had no idea which one was him! I found myself peering at the red combat boots, trying desperately to determine which ankles were my son’s. Are those his? Those? Truthfully, I had no idea.

Fortunately, what I’ve learned from my other kids’ IDF experiences is that there will be other ceremonies — more ceremonies than I would have thought possible during a two- or three-year service — and I will hopefully get a chance to attend at least one in person.

Incidentally, this is, after all a Jewish country, and food is somehow always part and parcel of these events — but when and what continues to remain a mystery to me. I always bring the wrong food to these ceremonies. Given who I am, there won’t be pots of homemade kubbeh soup that miraculously stay steaming hot for hours. But if I remember to bring food, they have food; if I don’t bring food, I was supposed to.

I remember once when my older son, U, a paratrooper, finished his medics course. The ceremony was at the Ir Habadim base in the middle of the Negev desert. I was coming from the West Bank city of Ramallah, and even left a meeting early to make sure I would make it. My husband was coming from a meeting in Netanya. We figured we would find a bakery on the way and stock up on bourekas and cookies. But there was no bakery and we showed up with a sad-looking schnitzel sandwich from a gas station. Not my finest parenting moment. He decided to forgo the sandwich, but we did take him out for a nice steak afterwards.

When you have a soldier child, all weekend preparations revolve around him/her. Is he coming home this weekend? What will he want for Shabbat dinner? In N’s case, he is a serious foodie, and his answers range from Peking duck to lamb chops to filet mignon. I even found a place in the Galilee that delivers fresh duck. He is the one who operates the smoker on our balcony, and then carves and plates the Peking duck with pancakes and scallion brushes.

Then there is the laundry. He usually gets home Friday morning, and has to go back Sunday morning. We keep Shabbat so we can’t do laundry then. Plus, for some reason, Israeli washing machines take two hours to do a load. So the washing machine needs to be free when he comes home — this means that I have to remember to remind my other kids, who, thankfully, do their own laundry, that they should do theirs on Wednesday or Thursday.

And then there is the question of butter. We try to send him back with a batch of my husband’s chocolate chip cookies but there has been an off-and-on butter shortage since Passover. So whenever we see butter at the store, we stock up in anticipation of his next visit.

All of this would be true without coronavirus, but things are even more challenging now. The number of confirmed Covid-19 cases in the army has increased significantly. The army has put new rules in place, including keeping most soldiers in their units for up to 30 days at a time. They are not allowed to travel on trains — which carry hundreds of passengers at a time — but they can get on crowded buses.

The army says it’s taking social distancing seriously. When the soldiers practice krav maga, the Israeli-invented self-defense, they’re not supposed to actually touch each other. Knowing how the army works, however, I doubt there is really no contact. The army says it is keeping soldiers in “capsules” and spreading them out — one person per bunk bed instead of two, staggered eating times in the mess hall, and training in small groups. But I have to say, I’m skeptical.

Every time N. comes home, I worry about Covid-19 on the buses and in the crowded Central Bus Station. Young people tend to think they’re immortal and aren’t great at social distancing. Part of the camaraderie of the army is physical — back slaps, hugs — and I am sure this is still happening.

“Shtuyot, Ima,” meaning, “Nonsense, Mom,” is the standard response of my unconcerned 19-year-old.

He just finished basic training and was supposed to have a regila, a one-week vacation, before starting advanced training. That was cancelled due to the threat of Covid-19, as was a home visit by his commander, who typically comes to see if his soldiers need extra time off to work to help support the family.

In many ways, I’m grateful that N is moving ahead with his life trajectory as planned. So many young people I know are stuck. Many have lost their student jobs (waiters, bartenders, etc.), and most university classes are being held only on Zoom. Those who finished the army and were traveling in far-flung locations around the globe cut their trips short and often moved back in with their parents.

A friend of mine calls it these young people “boomerang” children – you keep sending them off and they keep coming back. Now, especially, so many young adults are leaving their apartments and moving back home to save money.

N has a long three years ahead of him. I hope by the time his service ends, Covid-19 will be only a distant memory.