My Baby’s Naming Ceremony Was Virtual — and Meaningful 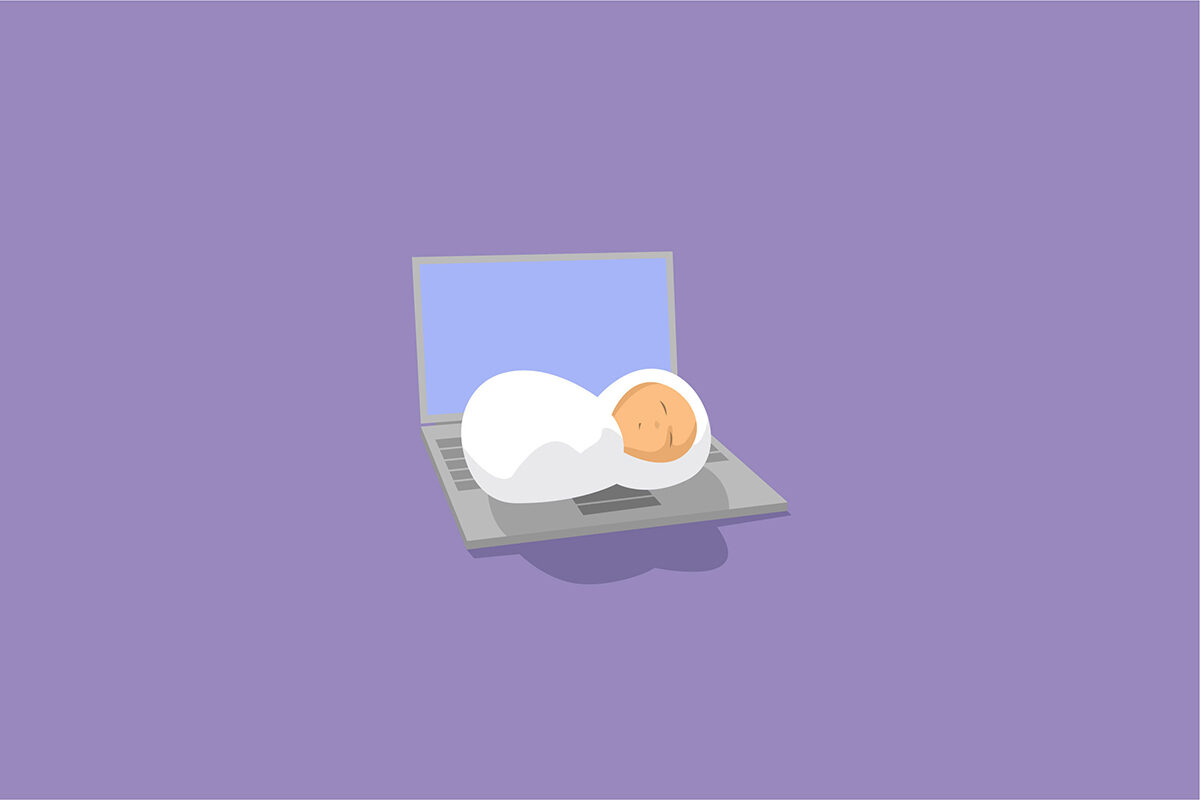 On a Saturday in early June, during our synagogue’s Shabbat services, we held a naming ceremony for our daughter, Izzy — the first grandchild on either side of our family. Normally, a baby naming is the kind of ordinary simcha a synagogue takes pride in: Like a b’nai mitzvah or wedding, it marks a growing, multi-generational community, one that can celebrate Jewishness at all stages of life.

However, in a twist that’s no longer remarkable months into the coronavirus pandemic, our shul held the service and the naming over Zoom — their first such ceremony. We had already held our baby shower (which we dubbed a “species reveal party”) online, so the idea wasn’t novel. My husband and I tried to dwell on the positives of this socially distant arrangement: our faraway friends and relatives could easily attend, without having to travel anywhere. We wouldn’t have to navigate public transit to West Philadelphia with a stroller or worry about the chances of coronavirus exposure for a 3-week old infant; we could sip coffee in our living room while chanting the v’ahavta.

Still, the hard facts remained: no grandparents cuddling the baby during an aliyah, no hugs with loved ones, no oneg with bagels after.

Our synagogue usually employed a visually arresting, symbolic ritual at baby naming ceremonies: The new parents would wrap their tiny human in a tallit and place her atop the unfurled Torah scroll, to symbolize the beginning of learning. This was a nod to the bit of Jewish folklore that says, in utero, babies possess all the knowledge of Torah and the universe, but just prior to being born, the angel Lailah touches a finger above the baby’s upper lip, erasing it — a cosmic restart button.

At home in our Philadelphia rowhouse without a Torah scroll, we used a paperback Tanakh instead. We wrapped Izzy in a friend’s tallit, marveling at our daughter’s calm and curiosity as we gathered the fabric around her.

For the adults logging in, the naming did everything it was supposed to do. Over the course of a few minutes, we invited a new human into Judaism, created the ritual theater that enacted that invitation, and sealed it with familiar words. We were all now used to this kind of on-screen substitution. After all, for weeks, virtual replacements for other gatherings had provided a recognizable, if lackluster, stand-in for the fuller version: the fronts of people’s heads were considered an acceptable shorthand for their whole circumferences; the light of their living rooms evoked the illusion of depth just enough so that we could recall what it was like to sit with them. Our rabbis had put hours of thought into what made a meaningful virtual service, even finding ways for people to sing together despite the grating Zoom delays.

Still, after we’d logged off and debriefed with our families, I felt a little deflated, as though we’d missed something. What did it mean that our daughter’s introduction to her Jewish community had to occur at a distance?

A baby’s very existence is the opposite of approximation; a newborn doesn’t understand symbols, metaphors, and substitutions. I realized this in the early days of caring for Izzy, at a time when every other activity in my life had been replaced by its remote equivalent. For a baby, nothing can stand in for being held firmly against a chest, or for being fed or cleaned — her world is still too small to be convinced that anything is like, or can represent, anything else.

In this regard, Jewish ritual would seem to have an advantage. Symbolic though it is, it always has a body: break the middle matzah, light the candles, cover your eyes, take three steps forward and three steps back. Even if you don’t always believe with perfect faith, some Jews are fond of saying, you can perform the physical ritual, or buy the kosher meat, or immerse in the mikveh, and feel you still belong.

Leaping into parenthood during a pandemic, my husband and I found such an embodied ritual in the ways our lives had dramatically changed. Together, we performed a 24-hour dance of soothing, feeding, laundry, and diaper-changing. Although we were, like any new parents, exhausted, I found something beautiful in the collaborative choreography we invented on the fly; the way each of us offered a bit of useful movement to the other whenever a gap appeared, or whenever our new knowledge seemed to falter.

I realized that our pre-pandemic Jewish lives also depended on this kind of bodily exchange: Absent perfect faith or observance, we rely on the bodily presence of our friends and family to receive us, respond conversationally to our shifts and hedges, to catch us in community where we might otherwise fall away. Prior to coronavirus, I sometimes showed up to services just to stand in the back without a siddur, whispering to friends and admiring their babies, and that was enough to make me feel reabsorbed.

While pregnant, I read A Time to Be Born, Dr. Michele Klein’s documentation of global Jewish folk traditions around pregnancy and birth. There were songs, amulets, blessings, treatments — so many of the practices that had provided the flesh-and-blood architecture for a Jewish existence turned out to have come from women. Unlike the mitzvot we learned about and argued over in Hebrew school, few had been written down, and in many cases the Holocaust and mass immigration meant that the organic line of transmission had been lost. When my daughter was born, I wished for the revival of those lines, for a roomful of women to gather and sing and worry and cook, to teach me how to be a Jewish mother, how to invite my baby to become a Jew. Without them, I sometimes feared I was inadequate, lacking enough Hebrew knowledge and steady practices of my own. How could I alone start her on the path to regaining the knowledge she had lost?

When we scrolled through the list of Zoom attendees at Izzy’s naming, we saw the names of friends from across the country and family members we hadn’t seen in person in months. A friend in New York took a screenshot of the three of us as the rabbi pronounced Izzy’s Hebrew name, Elisheva Minka. In it, we are beaming, even Izzy smiling at a screen whose purpose she doesn’t understand yet. Could this, the blinking gallery of our loved ones, be the crowded room we had envisioned to receive our daughter? Whether we wanted it or not, the virtual had become, for the time being, the body of ritual (one word, I can’t help but notice, contained in the other).

In A Time To Be Born, Klein describes a practice that touched me deeply: a laboring woman holds onto a string, its other end is tied to an ark holding a Torah scroll. As she pulls on the string, she is “opening the Ark in the hope of opening her womb.” Thinking on this, I realized the intensely physical connections that usually anchored Jews to one another, and to our observance, hadn’t been severed or replaced — they’d only been stretched across space.

Our daughter will grow up, at least for a little while, with these expanded entanglements, this community at a distance. We can’t do much more than accept it. Meanwhile, we have to believe that the bodies she does share physical space with — our incomplete, imperfect Jewish bodies — are enough for her. Bodies for which, after all, no substitutions exist, and for which no symbols will be accepted.