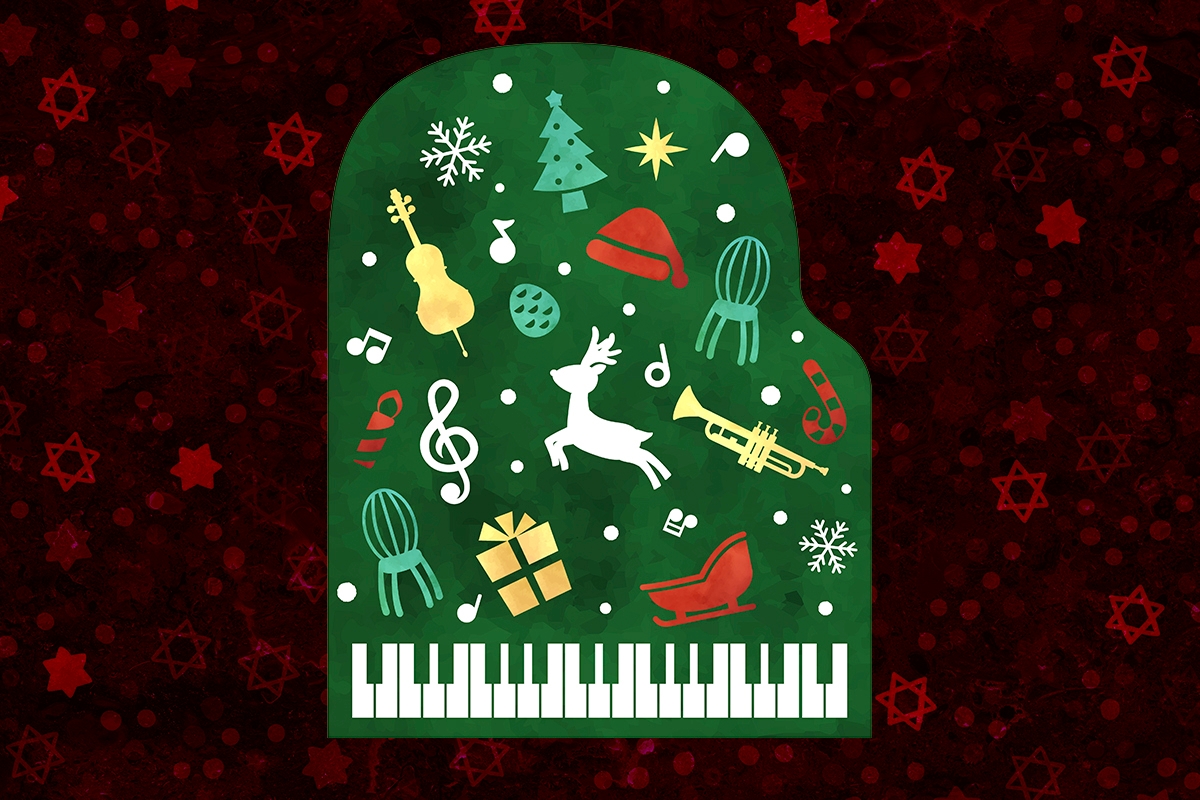 It’s the most wonderful time of the year — you know, the one where we’re completely inundated by Christmas songs and carols at every turn? While some of us may cringe at just how dominant this Christian holiday seems to be each and every December — and that’s true whether or not there’s a pandemic going on — it is hard to deny how catchy and joyful some Christmas music can be.

Here’s something you may not realize about these ear worms: Many of the most iconic Christmas songs of all time were written by Jewish composers.

Wait — but, why? Well, there are a few theories about why Jews threw their weight behind Christmas songs. As singer and pianist Michael Feinstein, known as the “Ambassador of the Great American Songbook,” told Religion News Service, Jews flocked to the music industry early in the 20th century — when most of the American Christmas classics were written — because it was one of the rare industries in which Jews didn’t face rampant antisemitism. Rabbi Kenneth Kanter, an expert in Jews and pop culture at Hebrew Union College, added that this embrace of Christmas music was a type of assimilation to America’s dominant Christian culture as well as a form of patriotism for Jewish composers. “These songs made Christmas a kind of national celebration, almost a patriotic celebration,” he said.

Whatever the reason, there’s no doubt that these Jewish masters brought a whole lot of neshama — Hebrew for “soul” — to their compositions, ensuring themselves an enduring legacy in American music history. From sentimental tales to comical near-misses, read on to learn the Jewish backstories of some of the most popular Christmas tunes you hear today.

1. “Chestnuts Roasting on an Open Fire” by Mel Torme

This classic, jazzy tune, was written by pop-jazz singer Mel Torme, a Jewish singer nicknamed the “Velvet Fog.”  Born in 1925 as Melvin Howard Torme, Mel grew up in the South Side of Chicago in a working class Jewish family. A musical prodigy who started singing professionally at age 4, Torme performed alongside Frank Sinatra and spent most of his storied career singing jazz. (Children of the ’80s may best know Torme as the obsession of the sitcom Night Court’s main character, Judge Harry Stone.) Torme collaborated with another Jewish lyricist, Robert Wells, to write his most famous composition: “The Christmas Song,” better known as “Chestnuts Roasting on an Open Fire.” The song was popularized in 1946 by the iconic singer Nat King Cole.

2. “Let it Snow” by Sammy Cahn and Jule Styne

Lyricist, songwriter, and musician Sammy Cahn was born Samuel Cohen in 1913. The child of Galician Jewish immigrants, he grew up New York City’s Lower East Side. Cahn kickstarted his fruitful songwriting career by adapting a Yiddish musical theater song “Bei Mir Bist Du Shon,” into English for the Andrews Sisters. Later, Cahn partnered with another Jewish composer in Hollywood, Jule Styne, with whom he wrote holiday hit “Let it Snow” (as well as the Broadway musical High Button Shoes). This song gets a gold star because, despite its general wintry cheer, it doesn’t actually reference Christmas at all! Cahn eventually garnered four Oscars, and among his most prominent work is the 89 songs he composed for Frank Sinatra, which later earned him a spot in the Songwriters Hall of Fame in 1972.

This suggestive, tongue-in-cheek tune was written by two Jewish composers, Joan Javits and Phil Springer. Springer grew up in a very musical family: his mother, Sylvia, was a professional pianist and his father Mordechai, a lawyer by profession, was also musically inclined. (Javits, now Joan Javits Zeeman, lives in Palm Beach, Florida with her chihuahua mix named Foxy Lady.) While Springer told the Los Angeles Times in 2017 that he doesn’t know why the song endured so much, there can be no denying that when songstress Eartha Kitt recorded the track in 1953, the song became a sexy Christmas song for the ages.

4. “It’s The Most Wonderful Time of the Year” by George Wyle and Eddie Pola

The brainchild of another dynamic Jewish duo, “It’s The Most Wonderful Time of the Year” was written by George Wyle and Eddie Pola. Wyle, born Bernard Weissman, began his career playing piano professionally in the Catskills. He went on to eventually co-write the theme song to Gilligan’s Island. Pola, born Sidney Edward Pollacsek to Hungarian Jewish parents, grew up in New York City. The two collaborated on the song in 1963, and it became a hit when Andy Williams sang and produced it that same year.

Yet another dynamic Jewish duo! This jazzy tune was written by Ray Evans and Jay Livingston. While the song doesn’t center any religious aspect of the holiday, it does celebrate the festive winter spirit as Christmas approaches. While Livingston grew up in a Jewish family in MacDonald, Pennsylvania — and Evans in Salamanca, New York — the two met and became musical partners at University of Pennsylvania. A fun, lesser-known fact about this iconic song? It was almost called “Tinkle Bells!” Fortunately, Livingston’s Jewish wife, Lynne Gordon, was aware of the double entendre of “tinkle” and persuaded her husband to change it.

Irving Berlin — who may be most famous for his patriotic hit, “God Bless America” — was born Israel Baline in Russia. Along with his family (including his father, a cantor), he immigrated the U.S. in 1893, where they lived on the the Lower East Side of New York City. The Jewish Standard reports that Berlin’s daughter said that it was her father’s gratitude for America —  the country that brought his family out of poverty — that fostered an appreciation for Christmas as an American family holiday. Thus, he wrote “White Christmas” in 1947 as another patriotic homage to this country and its distinctly American Christmas traditions.

7-10. “Rudolph the Red-Nosed Reindeer,” “Rockin’ Around the Christmas Tree,” “A Holly, Jolly Christmas,” and “Silver and Gold” by Johnny Marks

Johnny Marks grew up in an affluent Jewish family in Mt. Vernon, New York — yet clearly he had a particular knack for Christmas tunes! Marks, who was born in 1909, formed the St. Nicholas Music company in 1949, where he wrote some of the most popular Christmas carols of the modern era, including “Rudolph the Red-Nosed Reindeer,” “Rockin’ Around the Christmas Tree,” “A Holly, Jolly Christmas,” and “Silver and Gold.” Quite an impressive portfolio for someone who did not celebrate the holiday! Here’s another fun fact: According to multiple sources, “Rudolph,” which was co-written with Robert Louis May (another affluent, suburban New York Jew!) actually represents the ostracism May felt growing up as a Jew with a large nose.

11. “Walkin’ In a Winter Wonderland” by Felix Bernard and Richard B. Smith

This December-themed celebration of snowfall was written by Jewish composer and conductor Felix Bernard, along with his non-Jewish colleague Richard B. Smith. The story behind these lyrics is touching: Smith wrote the poem “Winter Wonderland” in 1934 while being treated in the West Mountain sanatorium for tuberculosis. His sister, Marjorie said he was inspired by the freshly fallen snow in the park to write this song. While Bernard took the menschy approach of getting the song published that same year, Smith sadly died the following year at age 34. This joyful song lives on as a beautiful legacy for Smith.