18 Jewish Facts About ‘Dirty Dancing’ You Should Know 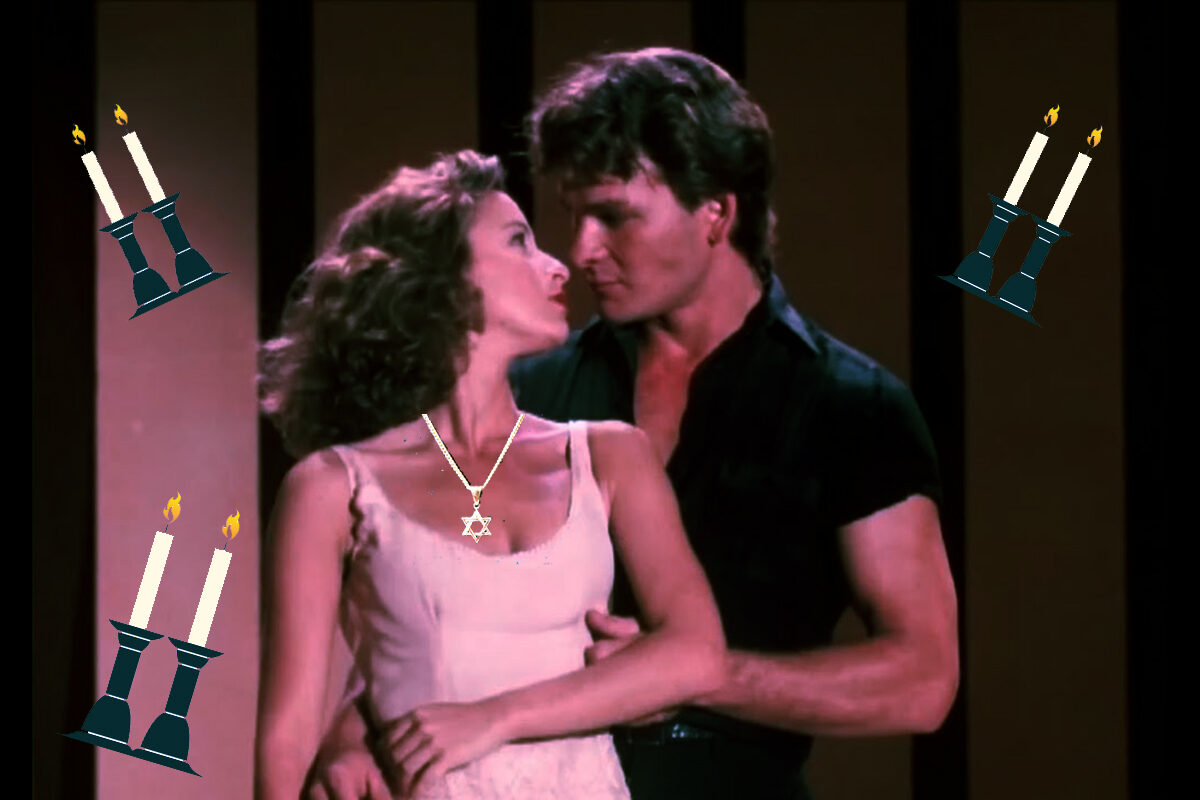 While most of us are cooped up at home this summer — rather than enjoying the pleasures of, say, a seasonal resort — now, more than ever, we can appreciate how a great film can bring us to a simpler time and place. The iconic 1987 movie, Dirty Dancing, now streaming on Hulu, provides a much-needed escape into a world of fun in the sun, retro lakeside activities, and steamy summer nights.

This beloved film, which some consider “the most Jewish film ever” is, in so many ways, JUST what the doctor ordered. After all, so many of the songs, dance moves, and the iconic lines — “Nobody puts Baby in a corner!” — remain permanently etched in our memories. Indeed, from its willingness to take on taboo topics — namely abortion — to its catchy soundtrack that seemingly played continuously in minivans across the land, there are many reasons to love this film.

But we’re here to celebrate the movie’s commitment to Yiddishkeit. From characters’ origins to its Catskills settings, here are our favorite 18 Jewish facts about Dirty Dancing:

1. From the 1920s through the 80s, the Catskill mountains were the hub for Jewish families looking to escape the heat and the hustle of New York City in the summer. The setting for Dirty Dancing, the fictional Kellerman’s, was based on a real resort: Grossinger’s Catskills Resort and Hotel in Liberty, NY. While the resort closed in 1986 and lies in ruins, there are rumors that it will reopen. The movie was actually filmed at two different lake locations in the southern states: Lake Lure in North Carolina and Mountain Lake, Virginia.

2. Jennifer Grey, the lead actress who plays the main character, Baby, is Jewish. The year before Dirty Dancing, Grey played Jeanie Bueller in an equally iconic 80s film: Ferris Bueller’s Day Off. In the decades since, Grey has made multiple jokes about the film, especially in reference to her two nose jobs which changed her look so dramatically it rendered her unrecognizable.

3. At one time, Grey was engaged to fellow Jewish actor and Ferris Bueller star, Matthew Broderick. In 2001, she married Clark Gregg, an actor who is best known for his role as Agent Phil Coulson in the Marvel Cinematic Universe. Gregg is not Jewish but he considers himself “a member of a Jewish family.” The pair have a daughter, Stella, and by all accounts, Grey seems like a super fun and relatable mom:

4. Speaking of Matthew Broderick, his wife, Jewish actress and shoe designer Sarah Jessica Parker, auditioned for the role of Baby! Reportedly it was down to Parker and Grey, but the chemistry between Grey and Patrick Swayze, who plays dance teacher Johnny Castle, was palpable.

5. Grey’s father is the legendary Jewish actor, singer, and director Joel Grey, who once starred in the Broadway musical Goodtime Charley, where Swayze was an ensemble dancer! Probably best known for playing the Emcee in Cabaret, Joel Grey’s big break was learning and recording a Yiddish song, “Romania Romania” for a record label in New York. He also recently directed the National Yiddish Folksbiene’s Yiddish-language production of Fiddler on the Roof.

7. Though the Jewish identity of the Housemans — along with other Kellerman’s guests — is never explicitly stated, Swayze himself confirmed Baby’s Jewishness in an interview with the American Film Institute about the enduring appeal of Dirty Dancing. “On a certain level, it’s really about the fabulous, funky little Jewish girl getting the guy because [of] what she’s got in her heart,” he said. Oh, to be called “fabulous” and “funky” by Patrick Swayze!

8. Baby’s father, Dr. Houseman, is played by the iconic Jerry Orbach, known for his famous role of detective Lennie Briscoe on Law and Order. Orbach is the son of a Jewish German immigrant.

9. Co-producer and writer Eleanor Bergstein wrote the film as a reflection of her own experiences at Grossinger’s in her youth, where she participated in and often won the “champagne contest” where she danced the mambo and the cha cha. She also based the film on her experiences with dirty dancing in basements when she was in high school.

10. Bergstein was named for political figure Eleanor Roosevelt, just like Baby’s real name — Frances — was in honor of Frances Perkins, U.S. Secretary of Labor under President Franklin Roosevelt. Perkins was strongly committed to helping Jews immigrate to the during the Roosevelt administration — in fact, her allyship was so staunch it sparked the rumor in 1936 that she was secretly Jewish. Nope!

11. The film’s clearest antagonist, Robbie, who gets Penny pregnant and proceeds to swindle Baby’s sister, Lisa, into a cheating relationship, is played by Jewish actor Max (Michael) Cantor. Sadly, Cantor died in 1991 at 32 from a drug overdose.

12. In Dirty Dancing 2: Havana Nights, the 2004 prequel takes place in Cuba in 1958 on the dawn of the Cuban revolution. Cuba had a prosperous and large Jewish population when the revolution began. Today, only an estimated 500 to 1,500 Jews remain.

13. Jewish actress Romola Garai, who plays protagonist Katey in Dirty Dancing 2, is Jewish — her father is of Hungarian Jewish descent, and most of that side of her family perished in the Holocaust. You may recognize Garai from her consequent role as Briony in Atonement (2007), playing the grownup version of Saoirse Ronan’s character.

14. The renowned Ronettes song that plays through the opening credits of Dirty Dancing, “Be My Baby,” was co-written by no less than three Jewish songwriters from New York. Phil Spector (born Harvey Phillip Spector) was born to a Jewish family in the Bronx, and husband and wife songwriting duo Jon Barry and Ellie Greenwich were both raised in Jewish families in Brooklyn.

15. Eric Carmen, a descendant of Russian Jewish immigrants sang the iconic song “Hungry Eyes” — which plays during the sequence where Johnny teaches Baby the dance for their performance. This song also sets the stage for one of the most honest moments in the film, when Baby begins laughing while Johnny strokes her arm during part of the dance.

16. And who could ever forget the Oscar-winning song that inspired generations of attempted stunt lifts and bar mitzvah dances, (“I’ve Had) The Time of My Life.” This iconic tune was was co-written by Jewish songwriter Donald Markowitz.

17. The inspiration for Penny — Johnny’s original dance partner — was Jackie Horner, the real-life dance instructor at Grossinger’s from 1954 to 1986. “I only came for a weekend,” she told the New York Post about her first time at the resort. “I ended up staying a lifetime.”Horner grew up in a Jewish family in Ohio and was married to the resort’s “tummler” — entertainer — Lou “Mr. Simon Sez” Goldstein, the hotel for 52 years until his death in 2012. Horner passed away in February of this year at age 87.

18. Some sort of sequel, starring Grey, is in the works! While sources haven’t confirmed the plot of the film, Grey will star and executive produce a dance-themed film set in the 1990s. Most recently, Grey has starred in the Amazon comedy Red Oaks. We can’t wait for this new take on the classic!

Super-fun bonus fact: Writer and co-producer Bergstein lived in the same building as Kveller’s founding editor and 70 Faces Media COO and edtiorial director Deborah Kolben. Kolben and her family were invited to be extras on set — basically THE DREAM for any pre-teen girl — but, sadly, her parents elected to take the family on a road trip to visit Frank Lloyd Wright houses instead. Womp, womp.