Our Gay Jewish Christmas Tree Is Everything the Holidays Should Be 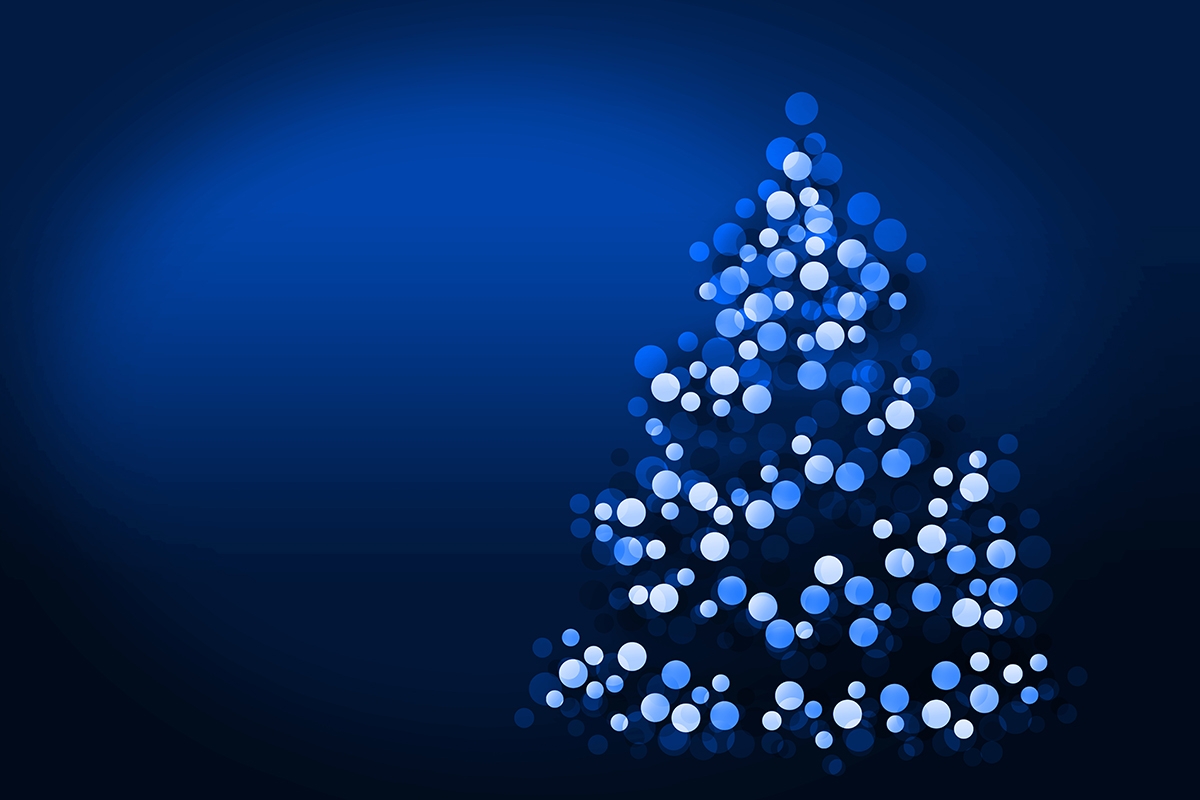 “At this point, Christmas trees are an American tradition, like apple pies and shopping on Black Friday,” I said, my face flushing, to our rabbi, while my soon-to-be wife stepped on my foot underneath the diner booth.

“Well, I think it’s confusing, having a Christmas tree and being a Jewish family,” Rabbi B. said.

This was back in 2016; it was our third premarital counseling session with the rabbi. The three of us were squeezed into a corner booth at the Tick Tock Diner in Manhattan, a retro restaurant across the street from Penn Station that’s popular with commuters from New Jersey and Long Island.  The restaurant rests against The New Yorker hotel, which was once known for being infested with bed bugs, or at least that’s what a trendy girl from Hell’s Kitchen once told me. Now, catching a glimpse of The New Yorker signage from three avenues away makes my skin itch.

Alissa and I knew Rabbi B. would be good fit for us during our initial interview; she was accomplished, robustly feminist, and vocal about the importance of marrying same-sex couples. Her unruly, hazel curls and sharp blazer stacked with shoulder pads evoked the word broad: a word I would use to categorize all of my favorite women. Up until this moment, the worst thing about the counseling sessions was the lighting in the diner, which caused my rosacea to flare up and spread across my cheeks. If the 1,000-watt fluorescent bulbs weren’t enough to burn my face, Tick Tock Diner has an extra sprinkling of neon bulbs and multicolored chandeliers which made the room brighter and hotter than my skin could tolerate.

“Do you want to order something?” the rabbi asked, pausing the Christmas tree debate. I knew Alissa wanted a Diet Coke, but we never ordered anything because we weren’t sure who was responsible for paying, and neither of us carried cash. Rabbi B. flipped the page of her oversized legal pad and scribbled the date across the top, while reminding us for the third time that in the summer of 2017 she would be taking a group of newlyweds to Israel, and she wanted us to join the trip.

“I don’t think it’s confusing at all,” I said, unable to change the subject. I watched my fingers tear apart a paper straw wrapper.

“My brother and I grew up in a home with Christmas trees, three separate nativity scenes, and we received advent calendars as Hanukkah gifts,” I added, “and not for one second did any of it confuse my understanding of Judaism.” Looking at my pile of rage trash, I tried reminding myself I was conversing with a rabbi not an internet troll. But I couldn’t stop talking.

“My mom grew up Southern Baptist and decided that raising my brother and me in my father’s religion, not hers, would serve us best. She sacrificed her entire family history of religion by giving us this gift of Judaism, so it seems like the least we can do to honor her is by having a tree. Christmas trees have nothing to do with the birth of Jesus. Having a tree is a way to hold onto the holiday feeling I felt as a kid,” I said in one breath.

“Our children will absolutely not believe in Santa,” Alissa chimed in, cutting off my diatribe and verbally body checking me.

But I continued to railroad the conversation. “It’s just a tree,” I said. “We don’t decorate it with angels or crucifixes, just colorful bulbs and non-denominational ornaments. Getting ready for Christmas was a meaningful activity at my house. I want my kids to have that feeling, too.”

Hearing Rabbi B. easily wrap her head around the idea of two women marrying and procreating while struggling to understand two Jews having a Christmas tree struck me as odd, but I kept those thoughts silent.

Looking down at the table, I noticed my pile of rage trash had grown half an inch as I crumbled up more paper from a second straw wrapper. Our hour was nearly up.

“This is something you can keep discussing as a couple, and your thoughts will likely evolve,” Rabbi B. said, ending our session. I sipped my ice water and stared at my mountain of paper balls.

That year, our apartment lacked any holiday cheer. I conceded to the idea that Jews shouldn’t have trees, and therefore dumped all of our holiday adornments down the trash chute. I worried that maybe allowing such items in our home was a watering down of Judaism, and therefore dangerous to maintaining our heritage.

However, two years after the Tick Tock Diner tree debacle, Alissa and I welcomed a baby boy into our family.  And nine months later, when the holiday season arrived, Alissa and I both felt compelled to decorate. This tug to spruce up our apartment reminded me of the nesting prior to our son’s birth; we wanted his eyes to be filled with lights and sparkle and magic. We decided it would be kosher to trim the apartment with blue and silver garland intermixed with white lights. A blue and white family of snowmen greeted us in our entryway, and Alissa agreed to let me hang my mother’s multicolored bubble lights, as they carried a sentimental history. Still, no tree stood in our home.

I spent the season looking at the corner of our apartment where a petite, all-American, artificial tree would fit. I said nothing, though, content enough watching the bubble lights recycle themselves around and around the glass candles on our windowsill.

Then, in March, just two weeks before our son’s first birthday, the coronavirus arrived in the U.S. Our son had spent his first 14 days on earth in the NICU, so we had been looking forward to a blowout party for family and friends to celebrate. A week before the party, we sent out a mass cancellation text — becoming among the first wave of disappointed pandemic parents. Our son devoured his first bites of cake, vanilla with chocolate frosting, surrounded by his grandparents, an aunt, and Sesame Street posters. For the following five weeks, we kept the posters hanging above his highchair as Elmo’s cartoon smile made our son laugh every time he entered the kitchen; it felt like the least we could do.

Like all pandemic parents, we’ve been innovating as we go. Months later, the morning after a socially distanced Halloween in which our son didn’t wear a costume, the thought of holiday directions entered my mind. I was reaching for a way to brighten up the dark times creeping back into the city.

Before I could even speak up, Alissa looked at me over our first cup of coffee one morning and said, “We should get a tree this year, right?”

“If ever there was a year to get a tree, I’d say a global pandemic is it,” I responded.

Coronavirus aside, I suspect we would have naturally arrived at a place of “yes” in regard to the tree. As a parent, you want to give your children joy and traditions during the holidays. And even though I grew up having a bar mitzvah and love for lox, Christmas trees were a part of my family’s holiday fabric, and I don’t want to let that go. Giving the increasing variance in the ways people live their lives, giving up a Christmas tree for the sake of religion seemed archaic.

Rabbi B. was right, of course. Our conversation has evolved. I’m a gay Jewish American with a Christian parent, and having a seasonal tree is a part of my family’s new world identity. A tree doesn’t make us any less Jewish or more American; it isn’t complicated, the same way having two moms isn’t. Our gay Jewish holiday tree is the embodiment of what the melting pot values of America should be: sparkling, allied, and, above all, hopeful.