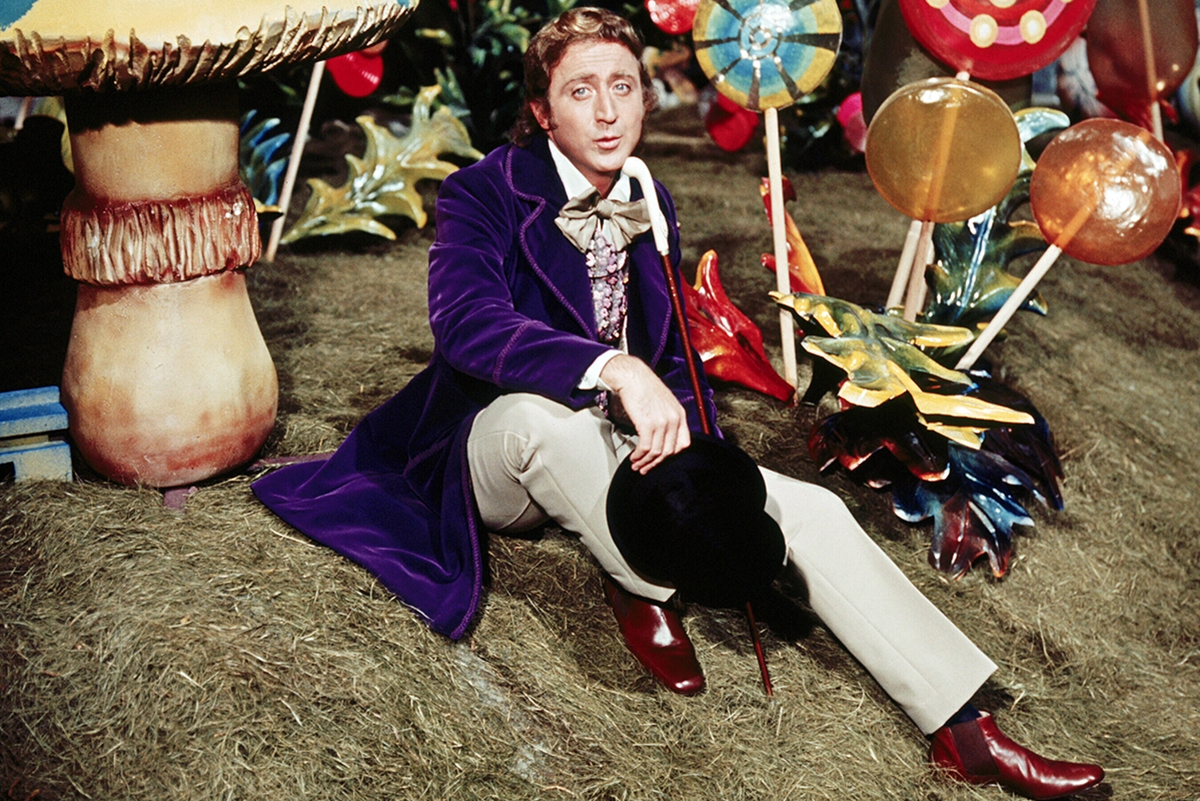 Today, June 30, marks the 50th anniversary of one of the most iconic kids’ movies of all time: “Willy Wonka and the Chocolate Factory.”

This film is one of the many movie adaptations of a book by Roald Dahl (who, by the way, is a noted antisemite and hated this movie). There’s something satisfying in knowing that many of said film adaptations star and involve famous Jews, like Mara Wilson in “Matilda,” Steven Spielberg directing “The BFG,” and, of course, the legendary Gene Wilder as the titular character in “Willy Wonka and the Chocolate Factory.”

The film was somewhat popular when it was first released in 1971. But it became a cult classic over the years, thanks to reruns on television and video tape and DVD sales. (Raise your hand if your family had a taped-from-TV version lying around the house!) And, as a 63-year-old veterinarian named Peter Ostrum — whom you probably know as Charlie Bucket — recently told NPR, “Gene’s career just skyrocketed after ‘Willy Wonka.’”

Wilder, who died in August, 2016 at age 83, is undoubtedly a Jewish icon — and, for generations of kids, he simply is Willy Wonka. Born Jerome Silberman in Milwaukee to Jewish parents, he routinely collaborated on projects with fellow Jews in Hollywood and exemplified his Jewishness in what has been described as an “understated nuttiness” by the New York Times.

In honor of the 50th anniversary of this beloved film, here are 13 of our favorite facts about Wilder.

1. He had a specific vision for “Willy Wonka” — including some demands.

Yes, Johnny Depp played the wacky candymaker in Tim Burton’s 2005 version, and Jewish actor Timothee Chalamet is set to play him in a forthcoming prequel — but Wilder’s portrayal of Willy Wonka is truly legendary.

Though Wilder had played smaller roles in hit movies (and had a starring role in Mel Brooks’ “The Producers”), “Willy Wonka and the Chocolate Factory” shot the actor to superstardom. But it almost didn’t happen: Wilder only accepted the role with certain conditions, like implementing the unforgettable somersault he performs when his character is first introduced. Wilder went even as far as to make recommendations on his costume; he worked alongside Jewish director Mel Stuart to create the whimsical Willy Wonka we all know and love today.

2. Wilder originated the iconic “Putting on the Ritz” scene in “Young Frankenstein”

“Young Frankenstein” has to be one of our favorite Wilder films. Wilder co-wrote the movie with his pal Brooks, who directed it.

One particular scene was a source of contention between the two: The classic “Puttin’ on the Ritz” bit, which Wilder was passionate about but Brooks did not want to do. “We filmed it and I said, ‘Gene, it’s the best thing in the movie.’ I had been so wrong,” Brooks told USA Today. In October, 2016. “And I cannot even tell him that now. Of course, I’ve told him that before. But I’d love to tell him all over again.”

3. Jewish comedian Gilda Radner was the love of his life.

Wilder’s third wife was Jewish comedian Gilda Radner — something really clicked for both of them when they met on set in 1981. In her 1989 memoir, “It’s Always Something,” Radner wrote, “My heart fluttered — I was hooked… It felt like my life went from black and white to Technicolor.” Swoon.

Their marriage was tragically short-lived, however, following Radner’s fatal battle with ovarian cancer after months of misdiagnoses. Since her death in 1989 at age 42, Wilder became an outspoken advocate for ovarian cancer awareness. He helped found the Gilda Radner Ovarian Cancer Detection Center in Los Angeles, and he was a cofounder of the cancer support group Gilda’s Club.

Wilder’s father, William Silberman, emigrated to the U.S. from Russia; his mother, Jeanne, was the daughter of Russian immigrants. Wilder grew up in an Orthodox congregation, but the family eventually attended a Conservative synagogue. He had a bar mitzvah, but he put up a bit of a fight about it: “I practiced singing the maftir a year before my bar mitzvah… And I was so distraught — because I had a high soprano voice and no one could hear me in the temple when I started to sing. So I said, ‘I’m not going to be bar mitzvah if you don’t have microphones next year!’ And they put the microphones in. And then, of course, my voice changed.”

5. He belonged to a Jewish fraternity.

Wilder went to college at the University of Iowa, where he studied communication and theatre arts. It was there that he was a brother of the Jewish fraternity Alpha Epsilon Pi. One can only imagine the fun he got up to back in the day! He graduated in 1955 and would go on to win the Distinguished Alumni Award from his alma mater.

6. He became an author later in life.

Wilder mostly retired from acting in the 2000s, notably telling Larry King in 2002, “I like the show, but I don’t like the business.” He pursued other interests, and eventually published his 2006 memoir, “Kiss Me Like a Stranger: My Search for Love and Art.”

Wilder spoke about his process with Bookpage: “Writing the book was, in itself, a kind of therapy. Several years ago, a brief trip to California became a months-long visit [when his mother-in-law took ill]. I thought I’d go crazy if I didn’t have something artistic to do… I started writing, and whatever had built up, after, oh, Gilda, then finding my wife, Karen, and then memories from childhood… it just started pouring out.”

Wilder would go on to write other books, including “The Woman Who Wouldn’t” and “What Is This Thing Called Love?”

7. He once received a kiss from Zero Mostel!

Wilder regularly worked with Jewish actors, including Zero Mostel, Broadway’s original Tevye from “Fiddler on the Roof.” Wilder recalled how nervous he was meeting Mostel prior to filming “The Producers”: “The door opens. There’s Mel… He says, ‘Come on in. Z?’ He calls Zero ‘Z.’ ‘This is Gene. Gene, this is Z.’ And I put out my hand tentatively. And Zero grabbed my hand, pulls me to him, and kissed me on the lips. And all my nervousness went away. And then we did the reading and I got the part, and everything was fine.”

8. He survived his own bout with cancer.

Following Radner’s death, Wilder became a strong advocate for fighting cancer in all forms. However, Wilder himself was thrown into the crux of the illness when he was diagnosed with non-Hodgkin’s lymphoma in 1999. He told Larry King in 2002 that he was in full remission and had made a “complete recovery.”

In 2003, Wilder won an Emmy for a guest performance — yep, just two episodes — in the sitcom “Will & Grace.” Wilder played Mr. Stein, Will Truman’s boss. According to Entertainment Weekly, when Wilder appeared on set during his episodes — the show was filmed in front of a live audience —  he “was met with a standing ovation.”

10. His mother inspired his lifelong interest in acting.

Wilder’s interest in acting started when he was just 8 years old. He writes about the experience of being told by his mother’s doctor, as she battled illness, “Try to make her laugh” — and he embraced the off-handed comment wholeheartedly. From then on, Wilder was constantly auditioning and acting, trying out for roles in local theatre plays and eventually performing in some Broadway and off-Broadway productions. Wilder even studied theater and fencing at the Bristol Old Vic Theatre School in the United Kingdom.

11. Wilder had a short military career!

After graduating from college and studying at the Old Vic, Wilder was drafted into the U.S. army. There, he received training as a medic and eventually worked as a paramedic at the Department of Psychiatry and Neurology at Valley Forge Army Hospital in Phoenixville, Pennsylvania. Talk about a multifaceted man!

Wilder was diagnosed with Alzheimer’s in 2010. In a powerful, tear-jerking essay, Karen Wilder — his widow and wife of 25 years — shared what it was like caring for her husband as his illness got progressively worse: “I watched his disintegration each moment of each day for six years,” she wrote. “One day, I saw him struggle with the ties on his drawstring pants. That night, I took the drawstrings out. Then his wrist was bleeding from the failed effort of trying to take off his watch. I put his watch away … We still managed to have some good times and to laugh, even at the ravages of the disease that was killing him.”

13. He wasn’t a biological father, but he was a Jewish dad.

Though Wilder did not have any biological children, he adopted his second wife’s daughter, Katharine, and became something of an adoptive father to his nephew, Jordan Walker-Pearlman. While Wilder and Katharine became estranged later in life, Jordan grew very close to his uncle, and even signed a statement announcing Wilder’s death as “Gene’s nephew/child.” Movingly, Walker-Pearlman describes how one of Wilder’s favorite songs, Ella Fitzgerald’s rendition of “Somewhere Over the Rainbow,” was playing when he died — and he closes the statement with an iconic “Willy Wonka” quote: “We are the music makers, and we are the dreamers of dreams.”