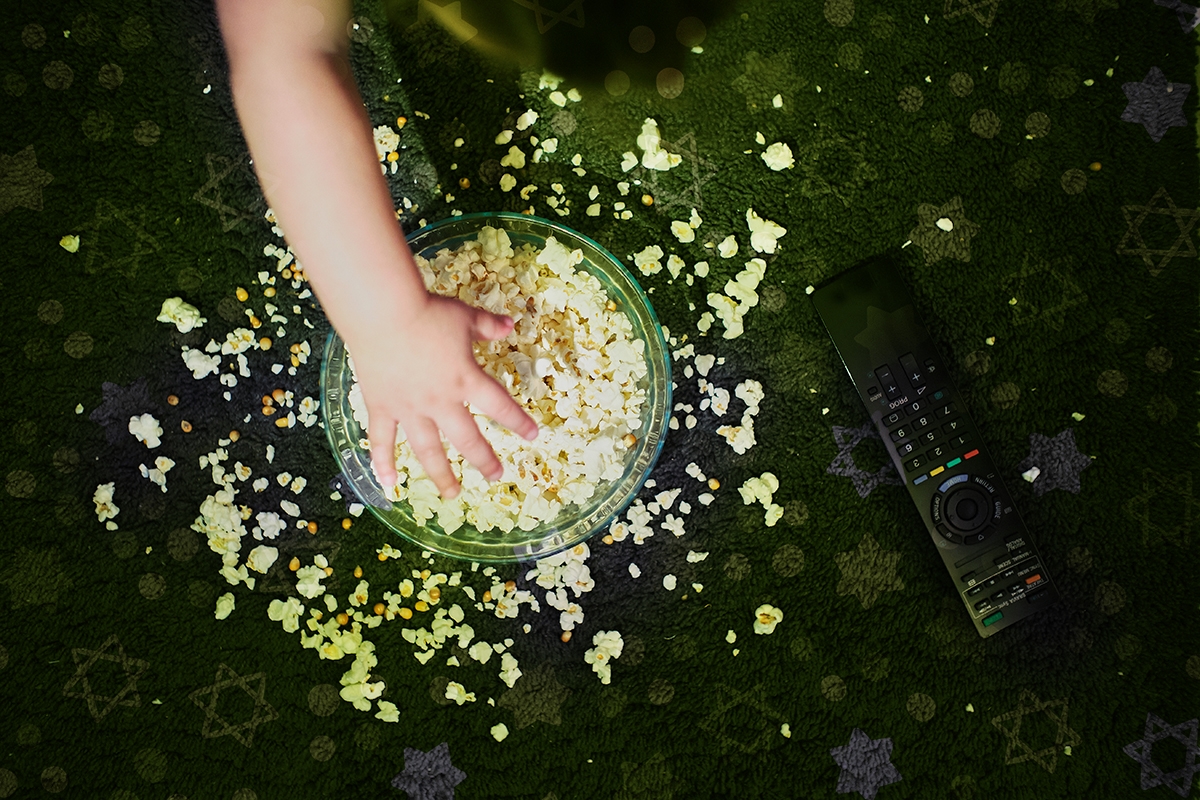 Ever since I’ve become a parent, there were certain parenting milestones I dreamed of reaching — one of them was going to the theater to watch a movie with my child. And while my son is finally old enough for us to entertain that idea, and theaters have reopened here in New York, it looks like that mother-son theater date will not be happening any time soon.

With omicron infecting literally everyone I know, and with my child being too young to get vaccinated, we’re going to stick to in-home family movie nights for now. We pull down the screen and projector set-up we got last year (it’s been such a good pandemic investment), get a tray of snacks (the movie-sized candy packs are so much cheaper outside the theater!) and watch a movie together as a family (OK, so I half watch it, half look at my phone, but hey, it’s better than nothing). These family movie nights have been the highlight of this pandemic.

But if you, like me, are starting to draw a blank re: what to watch on movie nights, I’ve assembled a list of movies that will divert your entire family — and help you celebrate some Jewish pride as a bonus!

Here are 18 films for a Jewish family night — with suggested snacks included:

“The Prince of Egypt”

One cannot have a Jewish movie night list without “The Prince of Egypt.” This animated retelling of the story of Moses and the exodus from Egypt holds up so well. The music is still just as wonderful and it is the most Jewish of stories. Plus, this movie features the voice of the queen of Mizrahi music, Ofra Haza (her memory and her music is a blessing). What a film.

Watch if: you want an epic biblical viewing experience for the whole family!

Watch it on Peacock or rent from other streaming services.

“Fiddler on the Roof”

Traditiooooon! Tradition!… is watching this movie with your family and seeing how far you’ll make it before someone falls asleep. “Fiddler” is three hours long, which may be a rough watch for some of your younger family members. You can always just watch the highlights (my son loves fast-forwarding to musical numbers!), or split it into two movie nights. I recommend scheduling an intermission and eating some Fiddler-themed snacks!

Watch it on Amazon Prime with a premium subscription on rent from other streaming services.

According to Sarah Silverman and the creators of the Disney franchise about the arcade game villain looking for a rebrand, Princess Vanellope from “Wreck-It Ralph” is Jewish, which means she’s officially the first Jewish Disney princess.

And while Vannelope doesn’t really identify as Jewish in the movies themselves, and her last name is von Schweetz, you can — and maybe should? — keep pointing out her Jewishness to your kids, even if it’s just to irritate them. If you watch the sequel “Ralph Breaks the Internet,” you should also point out that “Wonder Woman” Gal Gadot voices racer Shank in the movie.

Watch if: you enjoy feeling that gamer nostalgia and love a colorful 3D film.

Perfect snacks: all the candy!

Kronk from “The Emperor’s New Groove,” the 2000 movie about an emperor who gets turned into a llama, is Jewish! Possibly! Yeah, that’s right, the buff but adorable henchmen released Kronk’s challah recipe last year. Also, this Disney franchise is kind of delightful?

Watch if: you’re a lover of quirky Disney films.

“A Rugrats Chanukah,” “A Rugrats Passover” and “The Rugrats Movie”

The “Rugrats” holiday specials are just the best — as well as their year-round content. Baby Tommy Pickles’ mom, Didi, is Jewish, and the way the show explores the stories behind these Jewish holidays is A+. These specials make for a fun, short movie night that is especially perfect with the very littles. Plus, the new “Rugrats” reboot is, in my opinion, pretty great. Here’s hoping for more “Rugrats” holiday specials! Maybe a Purim one?

Watch if: you love Jewish holidays and animation excellence

Is there a more Jewish animated movie than “An American Tail?” The 1986 classic tells the story of mouse Feivel Mouskevitz who escapes the pogroms in Russia and chases his American dreams. We’re so glad it exists.

Watch if: you like “Fiddler on the Roof” but want an animated, anthropomorphic version of it.

Watch it on Peacock.

This retelling of “Oliver Twist” featuring dogs in New York City is such a delight. It also features music from the one and only Billy Joel, who also voices Dodger, a terrier mix, and Bette Middler as a spoiled poodle. In the original novel, Fagin is Jewish, but after the character drew accusations of antisemitism, mentions of his Jewishness were excised from the book by Dickens. In the movie, Fagin is a lovable petty thief whose accomplices are a group of mutts and is played by the delightful Dom DeLuise.

Watch if: you love dogs, New York and Billy Joel.

Is Jerry Seinfeld’s venture into kids’ film explicitly Jewish? Not really, but I mean, it’s Seinfeld playing a bee named Barry with lots of chutzpah who takes on the human race for exploiting bees for their honey. Barry’s Jew-ish bee parents are played by Kathy Bates and filmmaker Barry Levinson, Jewish dad Matthew Broderick plays his best bee friend and Larry King plays a fictionalized bee version of himself. It all just feels oh-so-Jewish.

Plus, “Bee Movie” is surprisingly a lot of fun. It might leave your kids with weird feelings about the honey industry, but it will remind them about the importance and amazingness of bees!

Watch if: it’s a Jewish new year or you’re a Seinfeld lover.

Movie time snack: apples and honey (locally sourced, not from a bear-shaped bottle!) or honey cake.

Watch it on Netflix.

Yes, “The Princess Bride” is not technically a Jewish film. But also, isn’t it? There are just so many Jewish facts about this delightful fantasy movie that’s perfect for family movie night. Mandy Patinkin felt his role as Inigo Montoya was an ode to his Jewish father, and Carl and Rob Reiner created this amazing tribute to the movie shortly before Carl’s passing, which you should watch post-movie night and try not to weap.

Watch if: you have a heart.

Watch it on Hulu.

“Full-Court Miracle” is a Hanukkah-themed movie about an NBA star coming to rescue a fledgling group of basketball-loving Jews and becoming their very own modern-day Judah Maccabee. Um, yes, it’s sometimes hard to believe this 2003 Disney movie exists, and it is cheesy, but it does get so many things right, and may actually be the perfect Hanukkah movie.

Watch if: you’re in a mood for a very cheesy, but heartfelt, early 2000s Disney film.

Beanie Feldstein is about to star in a Broadway revival of this iconic musical about comedian and Broadway legend Fanny Brice and her turbulent love affair with gambler Nicky Arnstein.

This means it’s a good opportunity for you and your family to revisit “Funny Girl,” because musicals are the best family night films, as we all know. It may not please the younger crowd, but if your kids are 10 and older, it should make for a pretty great movie night. Barbra Streisand is just so good in this 1968 movie and the songs? They’re unforgettable.

Perfect snack: some bagels and schmear on a plate of onion rolls.

Rent for $2.99 on Amazon or any other streaming platform.

Speaking of Babs, Barbra Streisand made history in 1983 as the first woman to win a Golden Globe for best director for “Yentl,” and don’t you want to expose your kids to more history?

This musical film based on a short Isaac Bashevis Singer story tells the tale of Yentl, a Jewish woman who pretends to be a man to go study in an all-male yeshiva. It also features an incredibly compelling (I mean, that’s one word for it) young Mandy Patinkin. Swoon.

“Yentl” is probably not appropriate for the youngest viewers in your house, but it makes for a great movie night with older kids.

Watch if: you’ve got angsty teens who like musicals.

Watch it on Pluto TV.

“Crossing Delancey,” the perfect Jewish romcom, is leaving HBO Max at the end of the month. But don’t worry, it will be streamable elsewhere, and it is 100% worth the money to rent it. The romcom about an accomplished woman in her 30s whose Jewish grandmother tries to set her up (with the help of a quirky matchmaker) with a Lower East Side pickle purveyor is swoon-worthy.

While this movie may not please younger audiences (though I mean, you never know), it is a reminder of how dreamy Jewish men who make pickles can be.

Watch if: you believe in love

Watch it on HBO Max.

Pharaoh played by Yul Brenner? Hunky silver-fox Moses played by Charlton Heston? Cheesy borderline camp 1950s melodrama? Yes, the 1956 film about how Moses got the 10 commandments has it all — including much drama.

Watch if: you want to introduce your kids to 1950s cinema and either blow their minds or really test their patience.

Rent it for $2.99 on Amazon or any other streaming platform.