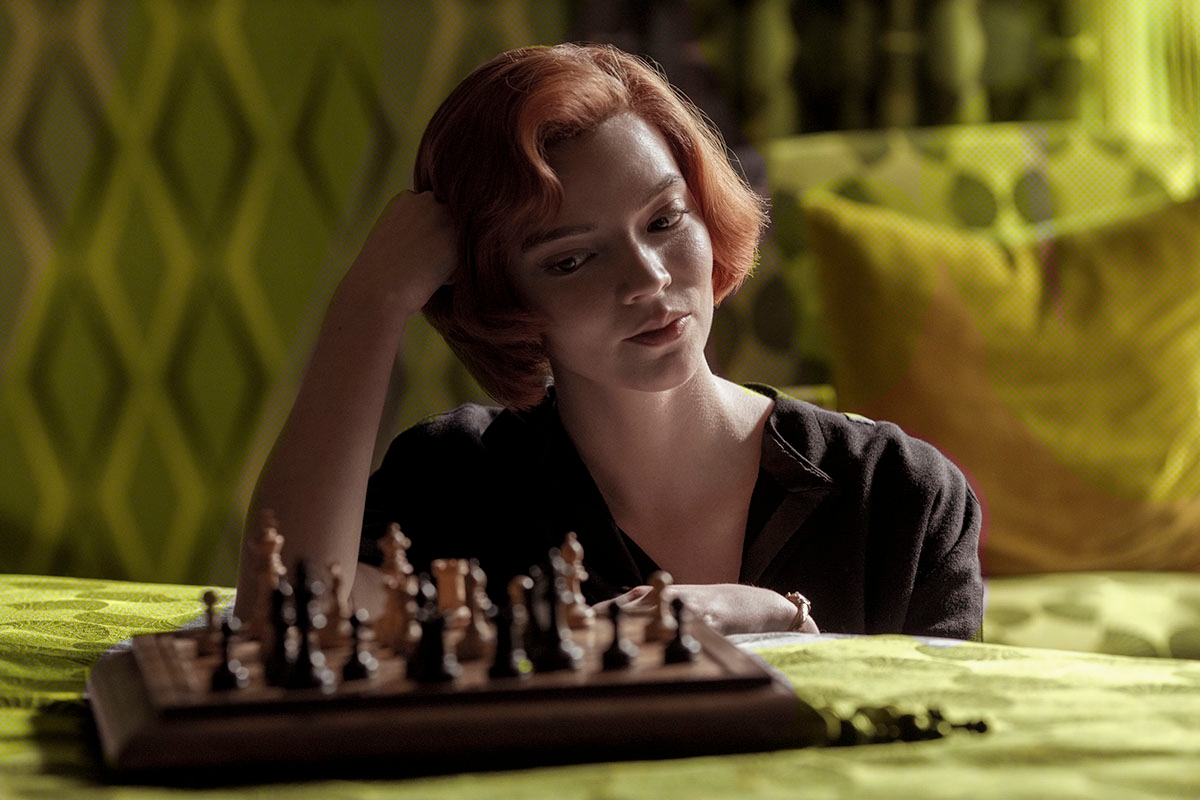 If you’ve found your quarantine comfort with Netflix, you may, like us, be obsessed with The Queen’s Gambit. This hit series has made chess fashionable again, boosting downloads of chess apps and spurring conversations about sexism in the world of competitive chess.

The Queen’s Gambit stars the incredible, nymph-like Anya Taylor-Joy (who is also amazing in Emma) as Beth Harmon, an orphan and chess prodigy who slowly makes her way to the top of the competitive chess world. And while many of Beth’s co-competitors have Jewish last names, not much about the show is explicitly Jewish.

And yet, so much about chess, in its modern iteration, can be traced to Jewish players. Plus, so many Jewish players inspired — and are inspired by — this incredibly moving show that’s resonating with chess lovers and chess newbies alike. And because we love to kvell about successful (chess-playing) Jews and share amazing Jewish stories, here are nine Jewish facts related to The Queen’s Gambit.

1. The show’s co-creator, Scott Frank, is Jewish. Frank, a longtime TV and film writer, has been nominated for two Academy Awards for Best Adapted Screenplay, for Out of Sight and  Logan. In his previous show, the Netflix miniseries Godless, Frank  inserted some lines from the famed Jewish poet, physician, and philosopher Yehuda Halevi.

2. AFP correspondent Deborah Cole revealed that the manor house that stood in for the exterior of Beth’s orphanage has a fascinating and tragic Jewish backstory. The mansion in Berlin once belonged to the Israels, a Jewish family that started a retail dynasty in the city in the 1740s. This estate, according to Cole, was bought in the mid-19th century by Moritz Israel, who built the villa on the grounds as a wedding present for his son, Richard, and his wife, Bianca.

The Israels were modern, patrons of the arts, and generous with their fortune. But unfortunately, with the rise of Nazism, they were stripped of all their belongings. While some of the couple’s children managed to escape Germany, Richard and Bianca, unfortunately, did not — they were sent to Theresienstadt, where Richard died. Bianca survived the Holocaust.

Fans of The Queen's Gambit, German history aficianados: I went out to Schulzendorf near the new BER airport to find the manor house that stood in for Beth's orphanage in the series. It's an evocative place linked to one of Berlin's most illustrious Jewish families (thread) pic.twitter.com/bIczWCsW4G

3. The actress who plays Alma, Beth’s adoptive mother, is Marielle Heller, whose father is Jewish. In addition to acting, Heller is an incredibly acclaimed director. Most notably, she directed the Mr. Rogers biographical drama, A Beautiful Day in the Neighborhood, and moved to Pittsburgh for the project, enrolling her son in the local JCC. Three days after the movie wrapped shooting, the Tree of Life Shooting took place.

“The JCC became kind of Ground Zero for everyone in mourning and it was where a lot of the counseling was happening, gathering was happening. So he got to see that and was a part of that,” Heller told the Pittsburgh Post-Gazette about her son.

4. In the fifth episode of the show, Harry Beltik talks about two real-life Jewish chess players who played chess with a blindfold: George Koltanowski and Wilhem Steinitz.

Koltanowkski, who was known as Kolty, was born in Antwerp, Belgium, to Polish Jewish parents. Though he  died in 2000, Kolty still holds the world’s blindfold record, which he set on September 20, 1937: He played 34 simultaneous chess games while blindfolded! Pretty badass, if you ask us.

As for Steinitz, he was the first official world chess champion, a title he held from 1886 to 1894. Steinitz was born in 1836 in the Jewish ghetto of Prague. The youngest of 13 children and a math prodigy, Steinitz started playing competitive chess as a student at the Vienna Polytechnic — and basically never stopped. He moved to London and then the U.S. He was also a prolific chess writer and theorist, which brings us to the next point…

5. Two Jewish players popularized the Queens Gambit; an opening chess move that’s one of the oldest around. One was Steinitz and the other was Siegbert Tarrasch, a Prussian Jew who was considered one of the best chess players in the late 19th and early 20th centuries, as well as an incredible chess theorist. (He was also a medical doctor!) While Tarrasch converted to Christianity in 1909, and lost a son in WWI, he still faced antisemitism in his native Germany with the rise of Nazism. He died in 1934.

6. Bobby Fischer is undeniably a very loose inspiration behind  for the more erratic and dark parts of The Queen’s Gambit. A chess prodigy, Fischer broke records when he became U.S. Chess Champion at 14 and a Grandmaster at 15.

Walter Tevis, who wrote the book The Queen’s Gambit is based upon, admitted to being inspired by Fischer’s playing: “The superb chess of Grandmasters Robert Fischer, Boris Spassky, and Anatoly Karpov has been a source of delight to players like myself for years. Since The Queen’s Gambit is a work of fiction, however, it seemed prudent to omit them from the cast of characters, if only to prevent contradiction of the record. ”

Fischer is also known for his erratic and reclusive behavior, especially later in life, as well as his overt misogyny, racism, and antisemitism — despite having a Jewish mother.

7. If we had to choose the real-life player who is most similar to the fictional Beth Harmon — minus the pill habit — we’d go with Judit Polgar, who is the daughter of Hungarian Jews. Polgar and her two sisters were trained to play chess at home, and all three became incredible chess players.

Polgar is still considered one of the best female players of all time. She broke Fischer’s own Grandmaster record, becoming a grandmaster at 15 (and 4 months) in 1991. Polgar had a prolific career in professional chess and retired in 2014. Honestly, she’s s so inspiring and impressive that she deserves her own Netflix series.

Polgar recently told the New York Times that she loved The Queen’s Gambit and that it gave her a sense of déjà vu, particularly in its later episodes, though she said the lack of sexism in the show did not feel realistic. She said that some men she played  disparaged her abilities and made hurtful remarks, and that some were disrespectful when they lost matches to her: “There were opponents who refused to shake hands… There was one who hit his head on the board after he lost.”

8. One such opponent was Gary Kasparov, whose father is Jewish, and who was a consultant on The Queen’s Gambit. In 1989, he said this about Polgar: “There is real chess and women’s chess… some people don’t like to hear this but chess doesn’t fit women properly… It’s not for women. Sorry. I think she’s helpless if she has men’s opposition. I think it’s simple logic.”

After many tough games against Kasparov, some even mired with controversy, Polgar finally beat him in 2002 — remind anyone of a The Queen’s Gambit plot point?

In a recent CNN interview, Kasparov admitted that he was wrong to disparage Polgar and women players. He added that when he and other male colleagues actually played her: “None of us viewed her as a female player, she was one of the top 10 players in the world. Period.”

The Queen's Gambit is a huge hit on Netflix, so who better to speak to than chess legends @Kasparov63 and @GMJuditPolgar? The longtime rivals turned friends reflect on the sexism and rivalries of the chess world. pic.twitter.com/R5iOwXHgtN

Since Kasparov quit the world of competitive chess in 2005, he’s actually become a strong supporter of women’s chess.

9. Jennifer Shahade, a Grandmaster, has extensively posted her opinions on the show online. Shahade’s mother, Sally Solomon, a former chemistry professor at Drexel University, is Jewish; her father is Christian and Lebanese. And fun fact: Shahade’s even been on Birthright Israel trips — twice!

On the whole, Shahade was incredibly celebratory about The Queen’s Gambit, praising the depictions of the game as well as its enthralling plot. But she also criticized the lack of representation of women’s games and women’s chess in the show.

#TheQueensGambit is so brilliant but using some women’s games would have been awesome. Many viewers google Beth Harmon and are disappointed to find she is totally fictional. Imagine the consolatory wink in redirection to Polgar or Menchik or Rudenko stories/games. #Playlikeagirl https://t.co/HsWs0qqKc8

Aside from being a successful chess player and a two-time U.S. Women’s Chess champion, Shahade has a degree in comparative literature, and she’s written two books about chess: Chess Bitch, about how women are changing the male-dominated chess world, and Play Like a Girl, which is a collection of tactical positions from the world’s best women chess players.

Shahade is all about encouraging more women and girls to play chess and, more and more, the chess world is on board with that mission. Shahade told The New York Times that the reason that a lot of girls quit chess is that they just don’t have the social support. To that end, Shahade and the U.S. Chess Federation started an online chess club to keep female players engaged during the Covid-19 pandemic. Hopefully, The Queen’s Gambit will boost turnout, and engagement, even more.