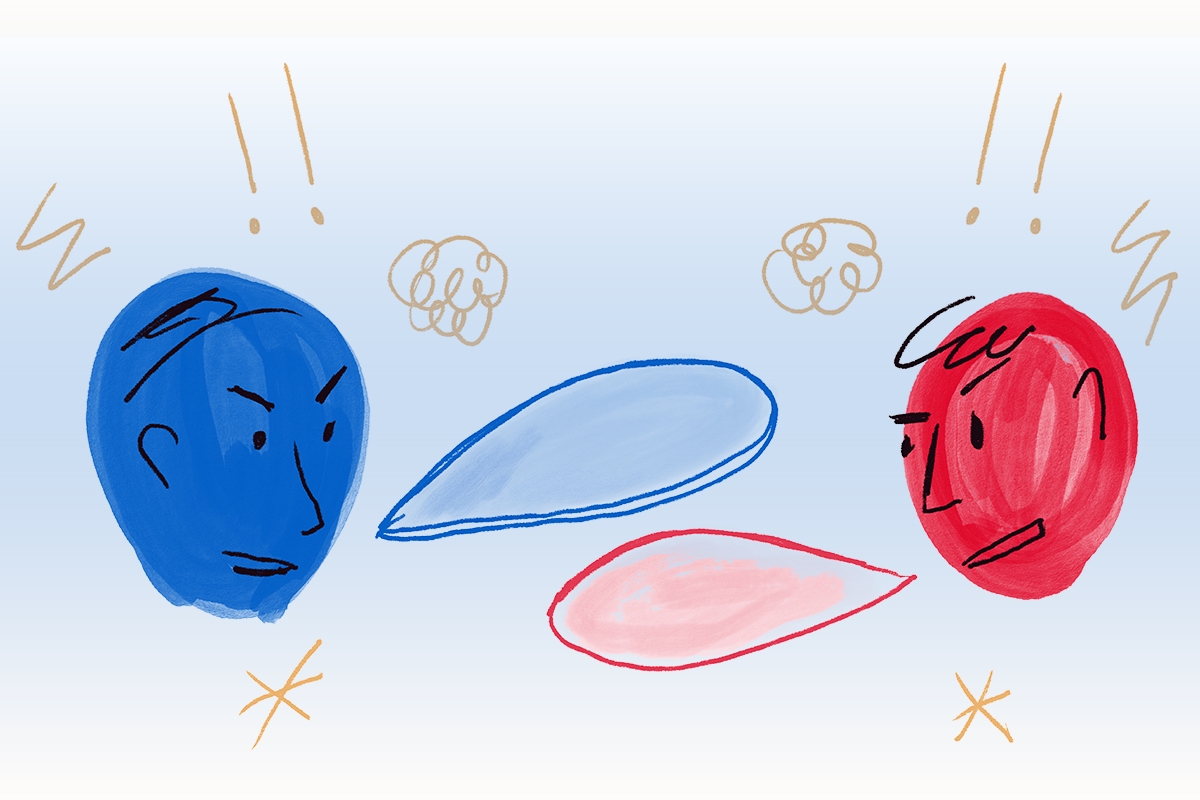 Until recently, I had a nice relationship with my neighbor. She came over to hit baseballs in our backyard batting cage; we shopped for patio furniture together; we collected packages and mail off each other’s porches. My family would share fresh vegetables from our garden with her, and she dropped off cupcakes for a pandemic pick-me-up.

I’ve always known she’s a Republican, and she’s known that I’m a Democrat. But we rarely talked politics — in fact, over the summer, she told me that we shouldn’t talk about the election, because she loves Trump and she likes me. She explained that she’d lost too many friends already because of politics.

So, she and I kept quiet about the election, even though I’m politically active. I wrote postcards for Biden/Harris as well as local campaigns, delivered yard signs across Pittsburgh, where we live, and canvassed. And, like we do for every major election, in September, my family placed a political sign — this year Biden/Harris — in our yard. We also hung up an American flag, a Pride flag, and a Black Lives Matter flag off our porch. We had ordered American Indian Movement, Biden/Harris, and Jolly Roger (a nod to the Pittsburgh Pirates) flags to show solidarity for other causes we support, which we hung up later that week.

Did we go a little overboard? Perhaps. But the decorations make me happy; I think they look joyful and I’m proud to show my support for all of these causes.

But then, one Saturday, just a couple days after we put out the sign and hung our flags, as I was weeding my street-side garden bed, I saw my neighbors climb into their car and begin to reverse down their driveway. I stood up and, as I normally do, I smiled and waved. The wife, who sat in the passenger seat, did not wave back as she usually did. In fact, she raised her right hand and extended her middle finger.

Shocked, I gasped and stared as they drove off. I turned to my family. “I think she just flipped us off,” I stammered.

“She did,” my 13-year-old daughter replied. “I saw her middle finger in the air.”

Suddenly, the day’s events started to make sense. My husband told me that the neighbor hadn’t responded when he said hi earlier that day. And, when I texted her about picking up corn stalks from our garden that she wanted for autumn decorations, she apparently had changed her mind and abruptly declined. Clearly, she was angry at us — I wasn’t sure why, but I had a hunch it was the flags and the Biden-Harris sign.

Our kids asked what they should do when they see her again. We told them to be polite and friendly, like always. Perhaps, I tried to convince myself, I’d imagined that middle finger.

The following afternoon, I received a text from my neighbor. She asked for forgiveness for her “bizarre action,” adding that she’d been under a lot of stress. She explained that she was angry at an imagined, possible scenario if she put out a Trump sign, “they” would throw rocks through her windows. But she never explained who “they” were.

I wrote back and said that her gesture felt dehumanizing. I explained that it made me sad that outside political messages resulted in this kind of treatment, and I told her that we talked about it with our kids. I also pointed out that we’d always been aware of our ideological differences, but had never altered from a path of respect and kindness.

With the hope of salvaging our relationship and maintaining neighborhood civility, I suggested that, after we cool off a bit, we should get together and talk. Unfortunately, my neighbor replied that she’d explained all that was necessary and was not open to any further discussion.

Escalating tensions between friends and family members due to political differences is not unusual, especially in these times. Extensive research over the last four years shows that there is a growing divide among Democrats and Republicans; according to a Pew Research study conducted in July and August, approximately 40% of both Trump and Biden supporters stated that they don’t have a close friend who supports the other candidate. Until my neighbor flipped me off, I thought we defied these statistics; I thought we could maintain our relationship despite our differing political worldviews.

I wish I could say that my neighbor’s behavior changed since she flipped us the bird — but, sadly, it grew worse. Earlier this month, she took a photo of my house and posted it on our neighborhood listserv, with the following caption: “Flags/ghetto: Is it OK to make our beautiful neighborhood look like a ghetto with numerous flying flags?”

I admit that when my husband and I do something, we like to go all out. Referencing Spinal Tap, we often joke that when we turn it up, we turn it up to 11. Had my neighbor simply asked, “Do you think all these flags are tacky and over-the-top?” I might have shrugged and even replied with a “yes.” But “ghetto?” I find the term racist, derogatory and, as the granddaughter of Holocaust survivors, personally offensive.

As another neighbor noted in a comment under her photo: “What exactly do you mean by ‘ghetto?’ Please note that regardless of your intentions, you may well be offensive to both your Jewish and Black neighbors with this comment.”

It’s true — for me, the word “ghetto” has terrible connotations. In 1942, my great-grandparents were taken from their homes in Germany and sent to a ghetto in Poland, Izbica, before they were deported and then murdered in concentration camps. Meanwhile, my husband spent his early childhood in a poor neighborhood in Utah, before moving to the Coeur D’Alene Reservation in northern Idaho. The term “ghetto” is loaded with racism, classicism, and antisemitism.

My neighbor’s actions reminded me of a story my grandmother — who grew up in a small town in northwestern Germany, before the Holocaust —  used to tell me: One day, in the mid-1930s, she came home to find a neighbor boy standing guard outside of her house. She said hello, but he pretended he had never met her before. She said that in that moment, she knew that something had changed in Germany. My grandmother had shifted from German to “other.” And, while the circumstances are wildly different, I realized that I, too, had become “othered” in the eyes of my neighbor because of my political views.

Remarkably, while our neighbor shamed and villainized us, our other neighbors stood up for us. After that listserv comment, dozens more appeared — all words of unity. People wrote that they thought our house looked beautiful, that they didn’t see a problem, and that they loved our dedication to democracy and America. One person suggested that maybe our neighbor should “re-examine what it means to be an American, and what it means to care.” Others said they were reporting the post. I chose not to comment on the thread, but rather bear silent witness as my community rallied around me.

In an effort to raise awareness about the Holocaust and the importance of tolerance, I often speak about my grandmother’s experiences to area middle and high school students. When I do, I talk about the importance of speaking up when people see injustice, and how the silence of bystanders is what perpetuates violence and hatred. America might feel like it’s being torn apart at the seams, but the comments of solidarity and support on my neighborhood listserv were exactly what I needed to read to realize that we’re going to make it through this divided time. I’m not sure if my relationship with this particular neighbor will ever be mended, but it’s nice to know that I have dozens of other neighbors with whom I can share the bounty of my garden.