Antisemitism Made Our Post-Pandemic Return to Synagogue Bittersweet 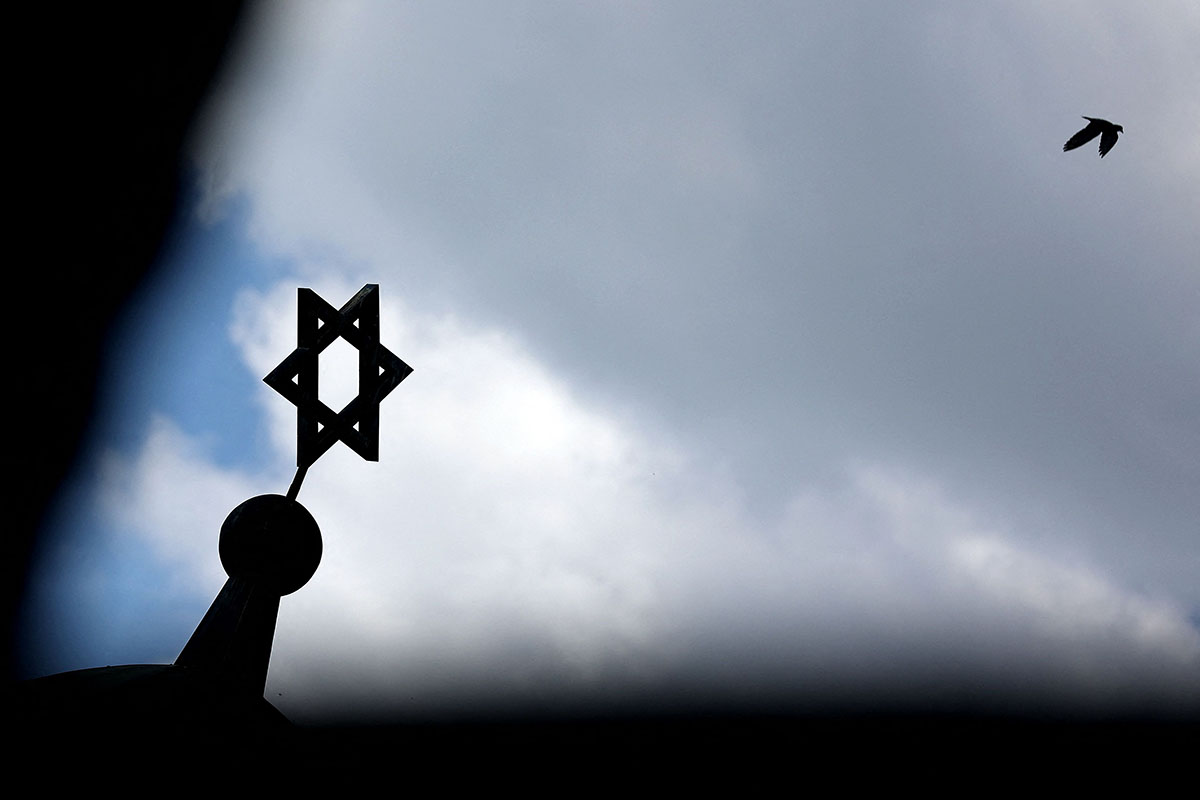 This past week, our family returned to synagogue for the first time in 16 months.

Prior to the pandemic, we would attend synagogue together every week. Shabbat mornings have always been a weekly highlight for our four daughters, who are now 11, 8, 4, and 2. Every Saturday morning, they hurry to dress in their special Shabbat clothes and walk with their father the quarter-mile to our shul. There, our kids join their assigned youth groups, which are led by dynamic young volunteers who enrich their Shabbat morning with play, prayer, and sweets. During this time, my husband and I are able to pray without interruption, comforted with the knowledge that our children are safe and happy. It is a beloved ritual for all of us, both spiritually and personally.

Last spring, when Covid-19 hit, our synagogue was one of the first to shut its doors in our Chicago community in West Rogers Park. We found ourselves at a loss on that very first Shabbat — it was cold, lonely, and frightening, and devoid of one of the most integral parts of the Shabbat experience: joining communally to sing and pray. Instead, we sat by the living room window, forlorn. With nowhere to go, there was no reason to dress up. The morning stretched ahead, all of us unsure how to fill the hours without our beloved synagogue to attend.

Eventually, we found meaningful ways to spend our Shabbat mornings together outside of our shul. We woke up more slowly. We read books together. We turned our living room into its own synagogue; I’d pray alongside my husband while he was cloaked in his tallit. When the weather improved, we sat on our lawn and talked to neighbors from a distance. It was special in its own way, but, truthfully, we were just buying our time until our “regular” synagogue Shabbats could resume.

Our synagogue’s reopening happened in stages. First came staggered, pre-registered times for men only, outdoors with masks and six feet of social distancing. Prayers were limited, with no singing or chanting to limit the possible spread of the virus. Then, with the arrival of winter, this same protocol moved indoors. Then female congregants returned. As vaccinations began, services returned to their original time slots, pre-registration no longer required. Slowly chairs moved closer together and then, with a fully vaccinated adult congregation, mask requirements were lifted for adults — and then, finally, the youth groups reopened last week.

My husband returned only after he was fully vaccinated, a total of 13 months. I decided I would not return until my children could go, too — to me, Shabbat was not whole until our entire family could pray together. When that day finally came last weekend, my girls could barely contain their excitement. As we tucked our 4-year-old into bed Friday night, she told us she couldn’t wait to go to shul. My eldest whispered in her ear, “The faster you go to sleep, the faster it will be time to go to shul.”

As thrilled as we were, it felt like a strange time to finally return to synagogue. That’s not because it was so bizarre to be indoors with other people again — although that did take some adjusting to — but because antisemitism was once again reaching a disturbing pitch.

Given the tense political climate following 11 days of deadly violence between Israel and Gaza, antisemitism, often cloaked under paper-thin platforms of “social justice,” is spreading as dangerously as the viral pandemic we are finally beginning to rise above. Over the past few weeks, the reports of antisemitic incidents have been relentless: Jews attacked in the street and at restaurants. More than 17,000 tweets in praise of Hitler’s agenda. Social media groups utilizing explosive rhetoric and dealing harshly with Jewish participants.

Recently, Jews have been harassed and attacked on their way to synagogue; some of those synagogues have been vandalized. It was a strange juxtaposition, how during this ugly uptick in hatred towards Jews, our family headed to the most obvious place for perpetrators to target. I hadn’t discussed with my kids the recent social climate towards Jews. We had been waiting so long to return to synagogue, I was hesitant to instill any fear in them. They had spent so many months being fearful of the virus that I didn’t want to take this moment away from them.

I assisted each of them out the door, the movements felt both familiar and foreign. Buckling and zipping dress shoes. Straightening skirts, adjusting hair. Strapping our youngest into the stroller. Not once did I allow myself to think that heading to synagogue was unsafe, that something terrible could happen. Not because it couldn’t — that fear is very real — but because in my children’s world, this was simply impossible. Their excitement chased away any thoughts of the hatred we were up against. I stood in the doorway watching them all head off, masks secured on their faces, their little feet skipping ahead.

That morning, I prayed in a group for the first time in 16 months. I heard the familiar songs and chants I had missed dearly, in a room full of faces I had not seen bared in many months.

At the conclusion of the Shabbat morning prayers, the rabbi took to the pulpit to address the congregation. He shared that, many years ago, when our synagogue first opened, some congregants had grown exasperated by how noisy the children were during prayers. The rabbi at the time addressed the congregants, asking them to please keep the children quiet. But after the services concluded, an elderly Holocaust survivor approached and told the rabbi an anecdote about what happened to him after the war. When those who survived gathered at his synagogue, something was missing: the sounds of children. Either murdered or sent away for safety, the children were nowhere to be found. This elderly man told the rabbi, “Never complain about the children. They are the synagogue’s future.”

Our rabbi indicated the final step of our reopening was the return of the children — that with their arrival, the synagogue was now complete. He then called all the children up to the pulpit, each of them running at the chance to be in a place of such importance. The rabbi then led the children, and us, in “HaMalach HaGoel,” a song that many mothers and fathers use as lullabies.

The entire congregation seemed humbled and grateful for this moment. After all, the voices of our children was a true sign of survival — one we desperately needed. Their singing indicated we had come through the pandemic among the lucky ones, yes. But it was also a reminder of a more ancient survival: that of the elderly man who told us to cherish the sounds of our children — a reminder of a will to live, not just as people, but as Jews.

I stood there, tears in my eyes, watching my own young children swaying and singing in a language we won’t let die. As a granddaughter of Holocaust survivors, there is an eerie and foreboding sense of warning in the recent surge of antisemitic attacks. These are frightening times to be a Jew. The truth is, it has always been a frightening time to be a Jew. Yes, they have come for us before, and they may come for us again. But our children are still singing, and in that, there is hope.