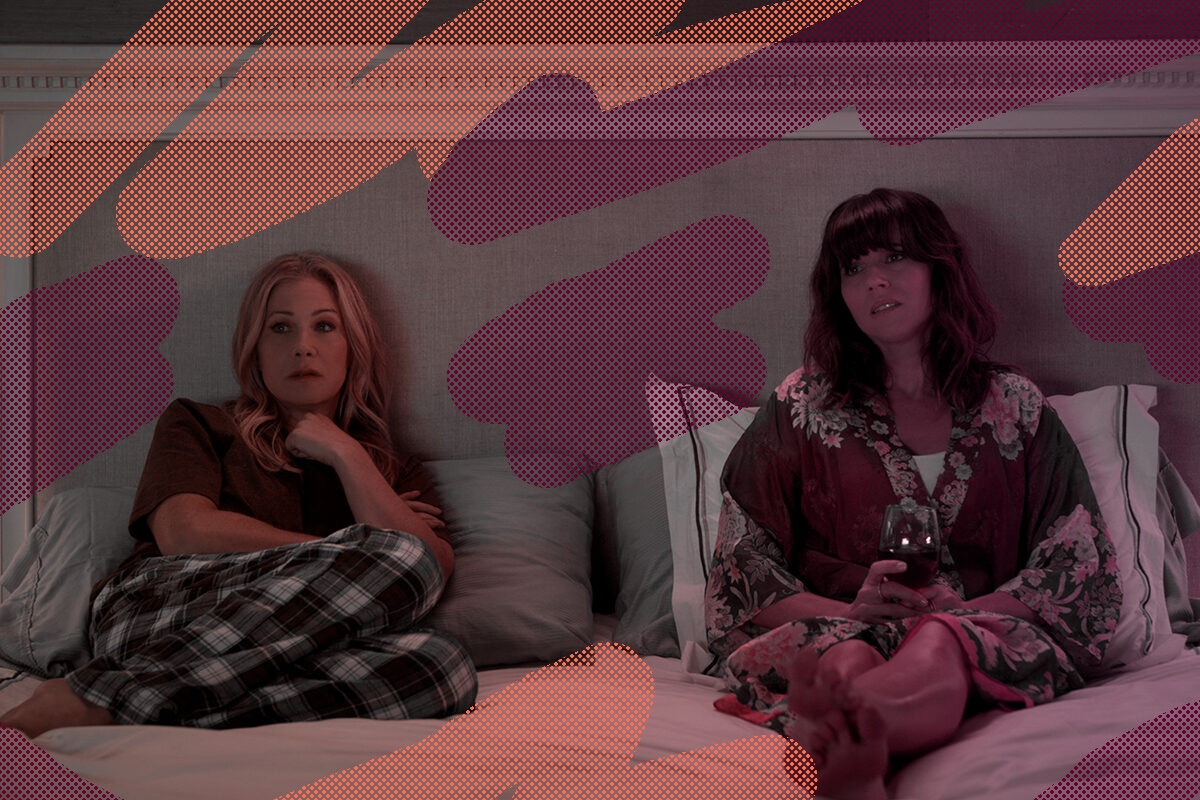 “I guess I feel like… a person who accidentally committed murder?”

That is the completely coherent middle-of-the-night thought that I had as I was watching season 2 of Dead to Me, the brilliant Netflix “melodramedy.” Helmed by Jewish showrunner Liz Feldman, the series stars the breathtaking Linda Cardellini and Christina Applegate as two women brought together by a tragic hit-and-run accident.

Ever since my husband, my toddler, and I started socially distancing in our home, I’ve filled my pandemic-anxiety-filled sleepless nights with compulsive TV watching. (You may have noticed I write a lot about TV!) But there was no show I was looking forward to binging more than the second season of Dead To Me, which premiered just in time for Mother’s Day  — which also happened to be the moment when I felt like I would never get used to this new reality.

And so, last Sunday, I was glued to my couch, completely exhausted after a weekend of parenting —  because what is a weekend anymore?! — looking forward to being distracted and delighted by Dead to Me‘s nail-biting cliffhangers (the show is truly a masterful feat of rollercoaster story-telling).

The second season certainly delivered on this front. But it also did something incredibly unanticipated: It made me feel so seen in this particularly strange and terrifying moment in my life as a mother.

It’s safe to say that, for most of us, there is nothing relatable about the situation the show’s two main characters — widowed mom-of-two Jen (Applegate) and the troubled and free-spirited Judy (Cardellini) find themselves in. Most of us, especially those of us who are safely social distancing, have not killed a man by the swimming pool of our fancy LA home, and we do not have any experience with hiding and disposing of said dead body.

But it is fair to say that a lot of us have had our lives violently upended by something we never anticipated — something deadly and sinister that has transformed our reality and identity as mothers, employees, and humans. These days, all of our insecurities and all the dark, invalidating thoughts we have about ourselves are bubbling at the surface.

So, in that sense, there is something very familiar about watching Jen and Judy try to go about their lives while the dead body of Judy’s ex-fiance, Steve, hides in a thrumming freezer in Jen’s basement. They want to convince everyone around them that they’ve got this — that Jen can still be a badass real estate agent and fiercely authoritative mom, that Judy can still be kind and warm and loving and free-spirited. Meanwhile, it’s all too clear to us, the viewers, that things are not OK and they’ll never be what they were.

Thankfully, though it may be anxiety-provoking at times, Dead to Me is funny, too. Impossibly funny, as Feldman is an expert at finding the humor seeded in the most tragic of moments. No joke is cheap or lazy. And no character is minor, either — the kids, especially, have full-blown personalities, which is something that I love about this show.

Jen is the main mom of the series. She’s a total badass and is sharp AF. She knows how to put everyone in their place and call them out on their bullshit: “She is not crazy, you treated her like shit, so she was driven crazy,” she tells her son about a girl he mistreats. She will not have your misogyny and condescension, please, so don’t call her “miss.”  Say “no” more often, she counsels her friend, and don’t say “I’m sorry” so much — two pieces of advice so many of us need to hear.

Dead To Me Presents: Five Things You Should Never Say To A Woman pic.twitter.com/1AYg71FOQ9

And yet, underneath that unapologetic and fierce veneer, it turns out that Jen feels just as shitty about herself as many of us do.

And that reality, too, is intensely familiar. As girls born into this world, there’s a lot of shit we internalize as daughters, then as romantic female beings, and then as mothers. Society tells us that we are not caring, or tender, or hard-working enough — and given the dichotomies among these attributes, its no wonder that so many of us succumb to the pressure and become hollow, self-hating caves.

Jen and Judy deal with this tension in drastically different ways. Judy became impossibly pliant and soft, at the expense of her own happiness. She flits from one abusive relationship to another, re-enacting the fucked up dynamics she had with her own mother, played by the fabulous Katey Sagal. (Yes, finally! Applegate is reunited with her Married… With Children mom and co-star!).

Jen, by contrast, doubled down on her truth, and in turn, was deemed bitter. “Your problem isn’t your mortgage, Jen, your problem is you,” Jen’s mother-in-law, Lorna, played by the indomitable Valerie Mahaffey, tells her. “Your personality’s off-putting, it’s affecting your sales.”

These days, I worry that I’m off-putting, too. I spend my waking hours watching my toddler’s face hypnotized by screens, when all I want to do is play with him, or teach him something, or, at least, have the time and energy to do The Things That I Am Supposed To Do As A Mom. Instead, as we’re all locked up at home, I’m keeping busy chasing my own tail at work, interrupted by one or another demand of motherhood, or playing a high-stakes game of caretaking musical chairs with my husband, where one moment of inattention can result in heart-wrenching accidents (toddlers are scary!). I try to cook, clean, and put on a shirt that doesn’t have stains on it. I fail at most of these things. And at the end of far too many days, well, I’ll just put it plainly: I hate myself.

I hate that I feel that way, but I do. And it’s not a foreign feeling — there are just so many things out there that can make me feel like a failure as a mom and human. But in the reality of a global pandemic, there is truly no escape from your home or your self-critical thoughts, which are sharpened and constant. This is not a good time for anyone’s mental health. But for mothers? Forget about it.

But Dead to Me also has moments of friendship and love, like when Judy tells Jen after she makes a comment about her weight, “I wish you would love yourself more.” In these scenes, I see my friends; I see the moms around me who are also struggling. When Jen apologizes to Judy, and gives her a needed hug, I find the balm of being seen and accepted. And given that these two friends know each other’s darkest truths and still love each other, I find some redemption.

In our era of peak TV, there are plenty of excellent shows out there exploring the reality of motherhood, like Netflix’s fabulous and messy Working Moms. But, for me, tales of raging. hormones, nursing bras, and lackluster sex lives aren’t really resonating right now, as none of that feels as dramatic as the feral intensity of parenting during a pandemic.

But Dead to Me hits the mark. It is so dark, it is so real, and it is so warm. It has compassion for all of its characters, no matter how murder-y they are. It also tells us we are worthy of a well-told, funny story that puts two complex, flawed women at its helm, and tells them — and therefore us — that they deserve to be loved, and that they deserve self-love. If you can’t really feel that right now, at least know this: No matter how bad you feel about yourself, at least you do not have a body in your basement.