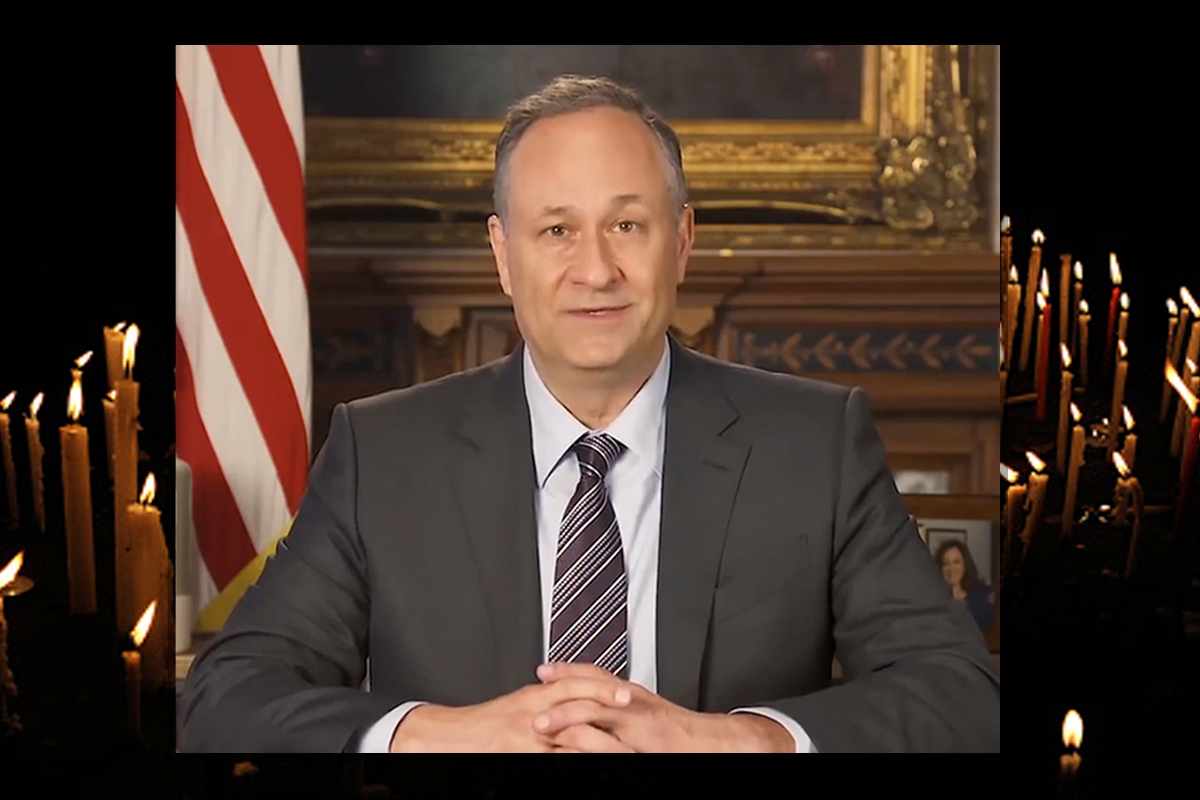 On Sunday, April 11, the Museum of Jewish Heritage held its annual Gathering of Remembrance to honor those lost in the Holocaust. The meaningful event, which has been held  every year for 40 years in honor of Yom HaShoah, was virtual this year and attended by more than 4,000 viewers. Featuring live music and a profile of Holocaust survivor and activist Judy Meisel, the event also spotlighted prominent Jewish voices to spread messages of remembrance and resilience — an especially important attribute in pandemic times.

But the event’s biggest draw may have been none other than our first-ever Second Gentleman, Doug Emhoff, whom, as we all know by now, is the Jewish spouse of our first female veep, Kamala Harris, who is becoming rather famous for his touching Jewish tributes online.

First, however, there was an appearance by sex therapist Dr. Ruth Westheimer — a survivor and a former sniper for the Israeli army — who answered a thoughtful question from a boy named Ethan, a fourth-generation survivor who asked how younger generations can best honor those we have lost to the Holocaust. With her signature smile — and peppy, red cat-eye glasses — Westheimer encouraged young people to embrace the Jewish value of tzedakah.

“I congratulate you for this question… Here’s my advice,” she said. “Every year, in addition to a yahrzeit candle, to the candle of memory, to give some money to a charity of your choice.”

Later, following a a tearjerking classical suite of Holocaust-era Jewish music, Emhoff delived his moving remarks. He first shared his reverence for those lost in the Holocaust, and connected their legacies to Jewish value of l’dor vador — from generation to generation — and resilience: “This most sacred day is also about resilience, the resilience passed down from great grandparent, to grandparent, to parent, to child,” he said.

He continued: “The resilience that defines the Jewish people, who I am so proud to call my people. The survivors of the Shoah endured the worst of humanity, and yet, they embodied the best of it.”

Emhoff then called viewers to action, borrowing from the widely-known words of Anne Frank, “‘How wonderful it is that nobody need wait a single moment before starting to improve the world,’” he said. “Her words ring with resilience: the same unbreakable spirit that defines us now. So, let us reflect and remember today. Let us start to improve the world tomorrow. May that be our tribute, may that be our legacy.”

Yet again, watching Emhoff embrace his Jewish identity on a public platform, we are so filled with pride to see a true mensch in the White House. Can you tell that we are kvelling?

To watch more of this meaningful event, a link is available here, and on the Facebook page of the Museum of Jewish heritage. A hearty yasher koach to all who participated in this beautiful gathering. May all the memories of those lost in the Holocaust be a blessing.