Preserving and Sharing My Grandfather's Holocaust Story, from One Generation to the Next – Kveller
Skip to Content Skip to Footer

Preserving and Sharing My Grandfather’s Holocaust Story, from One Generation to the Next 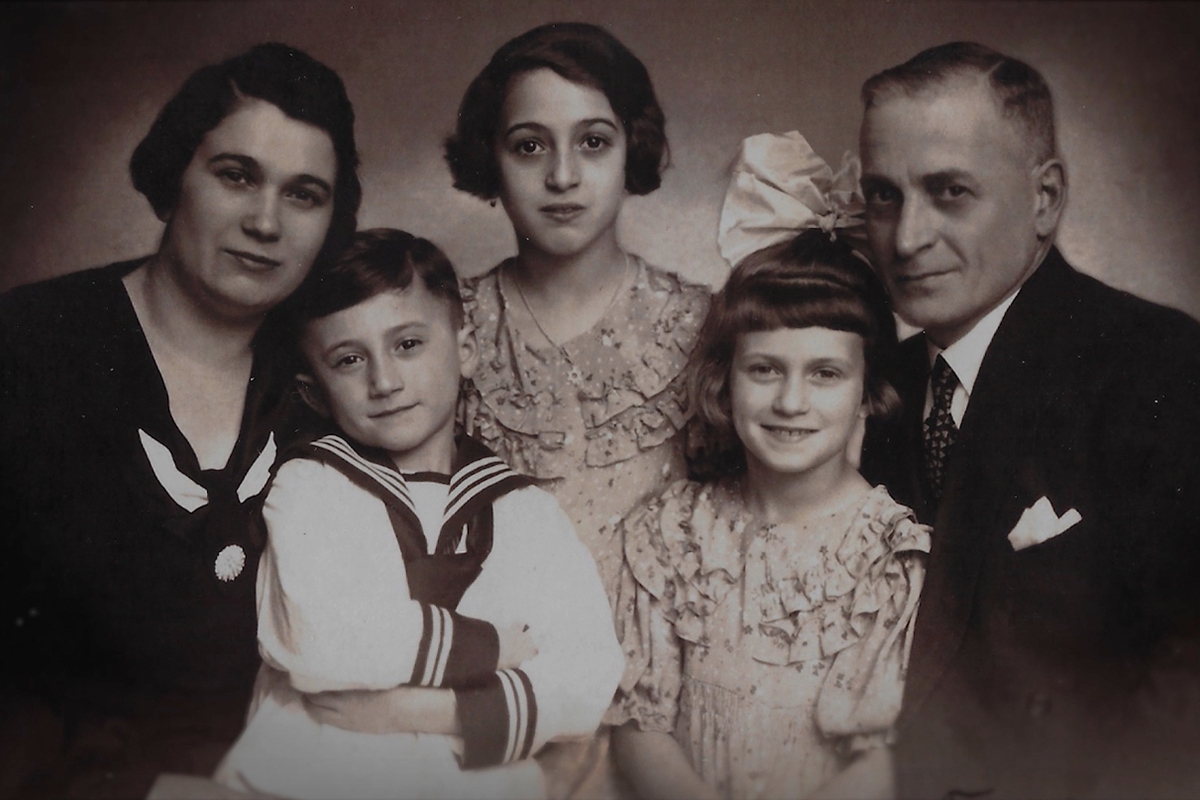 The author's grandfather and his family in the 1930s.

On this Yom HaShoah, the second since my grandfather, a Holocaust survivor, passed, I continue to reflect on his story, and how I can pass it forward to my own two children. As time goes by, I feel even more appreciative that I have been able to preserve his legacy through the documentary I made about his story of survival: The Starfish.

The Starfish is the story of my grandfather, Herb Gildin. In 1939, at the age of 10, he fled Nazi Germany — along with his two sisters, Cele (who was 14) and Margaret (12) — with the guidance of HIAS. They were taken in by non-Jewish families in the town of Falun, Sweden, saying goodbye to their parents in Germany, unsure if they’d ever see them again.

It took almost two years and a long journey, through Russia and the Pacific, for the three siblings to finally reunite with their parents, who eventually were able to immigrate to the U.S. There, they would go on to build a new life for themselves in Brooklyn, learning a new language and culture once again. My grandfather was determined to make a name for himself and his future family. Ultimately, along with his brother-in-law, he founded Satco Products, Inc., a lighting and manufacturing company that is still prominent today.

And yet, decades went by before my grandfather ever told his wife and children the story of his harrowing journey. While they learned bits and pieces throughout the years, it was not a topic of conversation my grandfather ever willingly brought up or reflected on. My grandfather was someone who always focused on the future — or on other people. Truly, speaking about his own past would have been out of character for him. Had it not been for my aunt(his daughter), who really asked the questions and did the research, he may have never so openly spoken about his incredible tale of survival. When he finally shared his story with the family at the age of 70, it inspired him to take one last journey back to Sweden to reunite with the remaining family members who had taken in his sisters and him.

While I didn’t take this trip with my family — in the summer of 2001, my siblings and I were at summer camp — the video footage my aunt and cousins captured was truly inspiring, and it eventually enabled me to tell a visually compelling story of reconnection. During a meal meant to celebrate the reuniting of the families, my grandfather gave a poignant speech in which he read Loren Eisley’s “The Starfish Story,” which is about starfishes that washed up along the beach, and the individuals who chose to throw them back in for another chance at life. This is a story that resonated with me deeply, as it’s also one we were told every year at summer camp. Knowing I could have been hearing this same story, across the world, at the same time as my grandfather told it, really moved me. It inspired me to title the film The Starfish.

I got to spend the last two years of my grandfather’s life working with him on the documentary, and that is something I’ll cherish forever. What’s more, now that his story is captured on film, I will be able to visually preserve his legacy and memory for generations to come. First-person narratives that capture what life was like for Jews during such a difficult time are more crucial then ever, as the sad truth is most of our children will grow up in a world without Holocaust survivors. They will have to rely on these films, books, and photos to continue to keep these stories alive. I’m grateful to forever have this documentary as a reminder of the importance of resiliency, human kindness, reconnection, and family tradition.

My son was born in December of 2018; before he died, my grandfather only had the chance to meet him once, when he was 4 months old. The photos and videos I have of them together are priceless. My son, who is now 2, often looks at one of the photos we have of the four generations together (my grandfather, my father, myself, and him). He’ll point at my grandfather and say, “Papa,” but there’s no way for him to actually remember him or know what he was like. Still, in a few years, when he’s older, I’ll be able to show him and his little sister this documentary. They’ll be able to know all about their great-grandfather as well as their own family history. 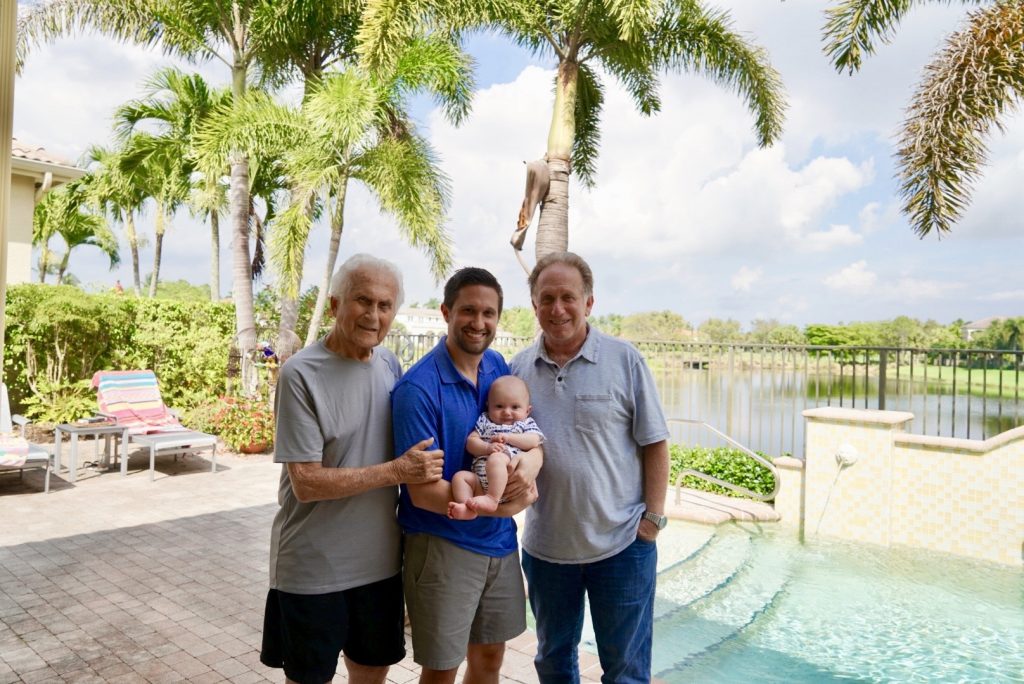 Four generations of the Gildin family.

The day my grandfather passed away at the age of 90 was a bittersweet one that I will never forget. While I lost one of the most important figures in my life, I also received a new joy as well, as my wife and I found out we were expecting another child. It brings me such joy to know one day my daughter, Harlow, will one day watch the film and get to “meet” the man who she was named after. I wish Papa had had the chance to meet her, but I do believe they will always be intertwined in some way.

This past Passover, we continued to honor a tradition of my grandfather’s that is particularly meaningful to me. As is our family’s custom, in the latter part of the seder, everyone in attendance takes a small piece of the afikoman, wraps it in tin foil, and stashes it away somewhere special for good luck throughout the year. This year, I posted a picture of my portion on social media, and several of my cousins responded, saying they do the same tradition because their grandmother (my grandfather’s sister, Cele) had taught them the same thing. This was really special to me as I imagine my grandfather, his two sisters, and my great-grandparents doing these same actions in Germany in the 1930’s. I find it meaningful that we keep this same tradition alive here in the U.S. nearly a century later.

My grandfather was never the most religious of figures, yet he proudly identified as being Jewish, and he strongly believed in continuing the traditions that were passed down to him. As a father of two young children, I hope to continue to honor his legacy as well as those of the many who came before me. I’m so grateful to have these traditions to remind me of him — but, ultimately, the ability to share his life story is the greatest gift my grandfather gave me — a gift I hope to continue to pass down for generations to come.

The Starfish is available to stream on various platforms; for more information, click here.