Eric Carle Grew Up in Nazi Germany. What Does That Mean for His Books and His Legacy? – Kveller
Skip to Content Skip to Footer

Eric Carle Grew Up in Nazi Germany. What Does That Mean for His Books and His Legacy? 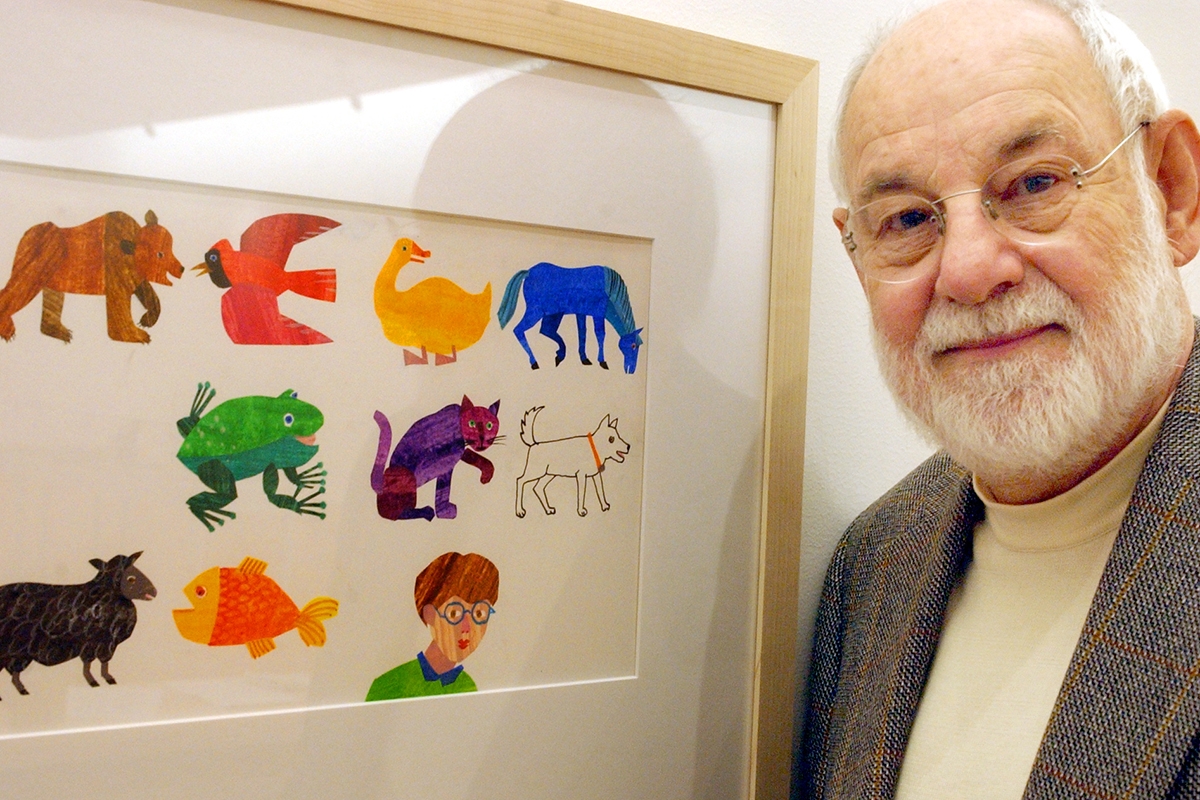 One of the first Hebrew books I bought my son was a translation of Eric Carle’s “The Very Hungry Caterpillar.” Like millions of others, I’ve always loved this book and its tapestry of vibrant colors and textures. What’s more, the simple tale is enhanced by the tactile pleasures of the perfect, little-finger sized holes in the book, which shows us where the caterpillar has bitten through the many foodstuffs he indulged in — especially the caterpillar’s delightful Friday-night binge, which, to this day, I find mouth-watering. (The book always makes me crave watermelon.)

I love the caterpillar’s transition from adorable little caterpillar to voluptuous and equally adorable fat caterpillar, and then the final, breathtaking technicolor spread of the butterfly. The copy of our book was so well-loved that, unfortunately, it fell apart, and we are going to have to purchase a new one for our second child, who is about to be born any second now.

As an artist, I’ve always adored Carle’s technicolor illustrations. As a parent, I love the thoughtfulness, warmth, and whimsy of his books, which also include “The Grouchy Ladybug” and “The Tiny Seed.” However, as a Jewish woman, I was shocked when I learned yesterday that Carle, who died on Sunday at age 91, had a dark Nazi past.

In the starkest of terms: at one point in his life, Carle, along with his father, helped Hitler in the fight against the Allied forces. While it may not be accurate to say that Carle was a Nazi — as an adult, he also served in the U.S. army — it is true that he and his father were both part of the Nazi war effort, albeit involuntarily.

It’s a shocking thought about a man who has brought so much wholesomeness and light into the lives of so many children and parents around the world. Yet, I’m not here to argue that we need to “cancel” (blech) Carle — I am still going to purchase that new copy of “The Very Hungry Caterpillar.” But I think it’s important to shed light on this unexpected history, how it impacted his art, and what it may mean — if anything — about his legacy.

Carle was born in Syracuse, New York, in 1929 to two German immigrants. However, his mother was so homesick that the family returned to Germany in 1936 — yes, Nazi Germany — when Carle was 6. As Carle recalled bitterly in one interview, “most people with any choice in the matter were going the other way.”

Carle lived in Germany through World War II and its aftermath, but he left at age 23 to pursue art and a better life in the U.S.

Carle didn’t talk much about his time in Nazi Germany. His reflections about this period were deeply personal and pained, and it seems clear that it had a huge impact on his career as a creative. His desire to reach out to children and comfort them with images and words were directly tied to his own sadness as a child in Nazi Germany.

In interviews, Carle recalled being homesick for America, where he fondly remembered his Syracuse classroom as a “sun-filled room, large sheets of paper, colorful paints and fat brushes.” To Carle, America was a land of color. Germany, by contrast, was mucky browns and monochrome — “the grays, browns and dirty greens used by the Nazis to camouflage the buildings,” he told the New York Times.

He was also shocked by the corporal punishment kids experienced at school. “I didn’t know this was going to happen,” Carle told The Independent. “The other kids did: three in this hand; three in that. And they [the welts] burned. And he [the teacher] did it with all his might. I know that was a turning point in my life.”

There were spots of color in that otherwise grim life. There was one teacher who saw Carle’s talent and risked his life to broaden his artistic horizons.

“My art teacher who had started out as a modern artist couldn’t teach that anymore,” he told The Guardian in 2009. “He could only teach realistic and naturalistic art. (But) he invited me to his home and secretly showed me reproductions — abstractions, German expressionists, maybe Picasso. I don’t remember. But they just really appalled me because I’d never seen anything like it. I was used to pretty paintings with a mountain in the background …  I was maybe 12 or 13, and that was an important moment in my life.”

Then came the war. Carle’s father, a gentle man who inspired the author’s love for the natural world, was conscripted to the German army, and he vanished for years into a Russian prisoner-of-war camp. He was absent from Carle’s life between the ages of 10 and 18 — and when he came back he was a ghost of his former self.

“To this day,” Carle said, “I can barely enjoy a good meal because of thinking about my father. I am left with a sadness. It might be psychobabble, but I rehash that period of my life through my books.”

At 15, Carle was conscripted into the military effort to dig trenches on the Siegfried line. He was one of about 20,000 forced laborers, all teens. (His second wife, Bobbie, who died in 2015, believed that he had PTSD from that time.) “The first day three people were killed a few feet away,” he recalled. “Not children — Russian prisoners or something. The nurses came and started crying.”

Missing in Carle’s reflections are any mentions of the Holocaust or Jewish persecution. When he described the destruction of his city, Stuttgart, in an interview, he did not mention the burning of the town’s synagogue, or the desecration of its Jewish cemetery, nor did he made any mention of the approximately 2,000 Jews from the region who were killed in concentration camps.

In that same interview, Carle described how, as a kid, “he looked up to Hitler and prized Rommel’s autograph.” It’s a strange one-liner to not interrogate: As far as I can tell, it is the only interview to ever suggest that Carle, an avowed Democrat and a generally progressive human being, had any sympathies for the Nazi regime. He and Bobbi lived in Northampton, Mass., for more than 30 years, and had a home in Key West as well. (Carle also had two children from a previous marriage.)

It seems strange to say that Carle was a Nazi, because it doesn’t seem like neither he, nor his father, had much of a choice about it. In that sense, he and his parents are like every German citizen who lived through the war and said nothing. On the one hand, there was a very steep price to pay for standing up to Hitler’s regime. On the other, it seems as though Carle never really acknowledged his, or his family’s, complicity — voluntary or involuntary — in the actions of that regime.

Unlike some other beloved children’s book authors (cough, Roald Dahl, cough), Carle was not known for antisemitism or any other kind of bigotry. His books were warm and diverse. The museum he co-founded with his wife in Massachusetts curated a show dedicated to Jewish artists, and many have found Jewish meaning in his work, which is full of universal lessons that deeply align with Jewish values.

RIP Eric Carle, a brilliant author and illustrator who clearly knew the difference between eating during the week and eating on Shabbos. pic.twitter.com/OX3CBJoqpD

Carle revered his Jewish colleagues in the children’s book world, and of the not-so-many posts of his Instagram, three are of him wishing his readers a happy Hanukkah.

As I wrote this piece, I read quite a few interviews with Carle. These helped me understand the values that ruled his world — mainly, a deep, deep reverence for the inner world of children. He loved when children looked at his drawings and told him that they too, could do that.

“I had a lot of feelings, philosophical thoughts — at the age of 6,” he told the Los Angeles Times in 1995. “The only way I got older and wiser was that I got better trained. But that brain and soul were at their peak.”

As a parent and human, it’s hard not to be enamored with that philosophy. After all, I want my children — and every child across the globe — to grow up with work that truly sees and reveres them. In a perfect world, I would want Carle to have acknowledged the evils of Nazi Germany, but I also understand how many German people of his generation struggled with talking and hashing out this time in their lives. Ultimately, I think the gentle morality, the kindness, and the vibrant colors he has added to this world do, in some way, atone for that.