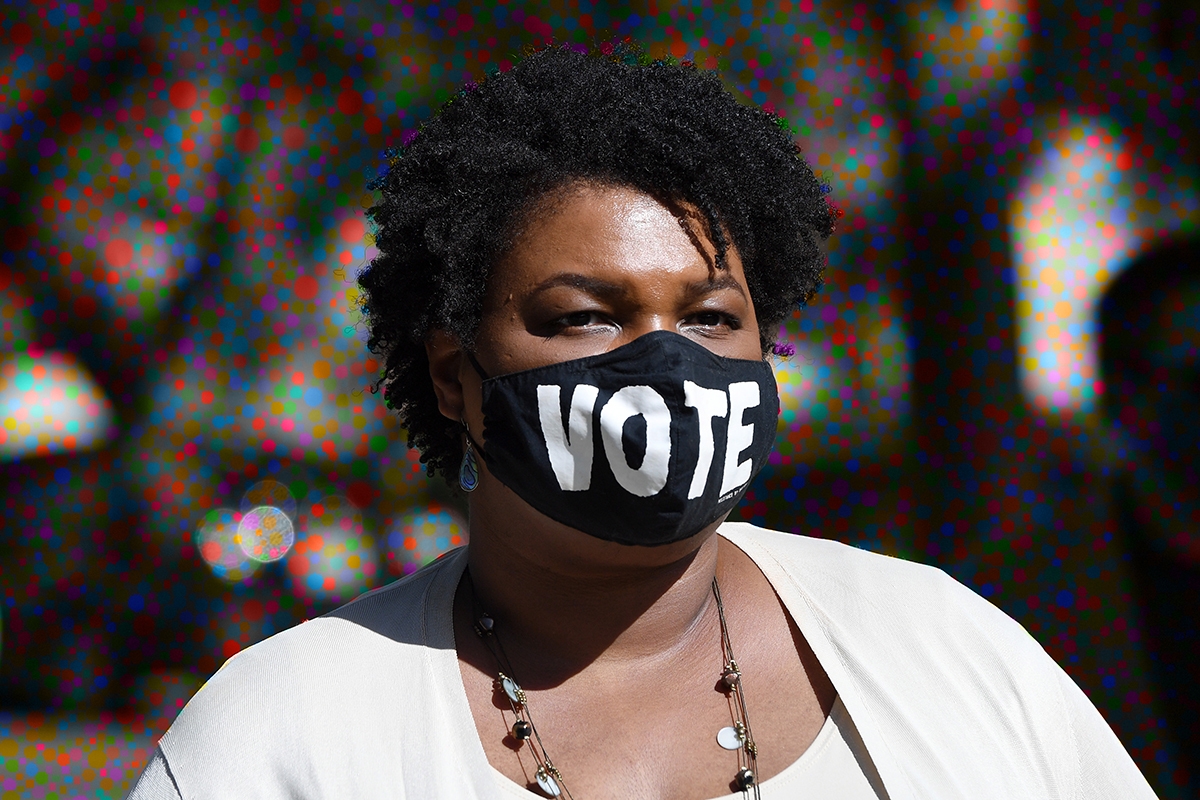 Throughout my entire life, people have told me that, unless you happen to be the leader of a country, one man can’t change the course of history.

To this, we can now all answer: True as that may be, it seems that one woman can.

That’s arguably a gratuitous comment, but I’m going to put it all out there: Stacey Abrams, a politician and voting rights activist from Georgia, is a perfect illustration of that latent power. It’s a power that I firmly believe every individual has — each one of us has the power to change the world.

But first, let’s give credit where credit is due: Abrams is, no doubt, a truly exceptional person, a brilliant Black woman who ran to be governor of Georgia in 2018. She narrowly lost her election, by some 55,000 votes, in no small part because the Georgia Secretary of State — in other words, the person overseeing the election; the person with the ability to close polling places, purge the voter rolls, and so on —  was her opponent, Georgia’s current governor, Brian Kemp.

Realistically, Abrams could have taken her sour grapes after this all went down. She could have sat quietly in the darkness, never to be seen again. But she didn’t. “I sat shiva for 10 days,” Abrams told Vogue in September 2019.“ Then I started plotting.” (And yes: Abrams is not Jewish but she really said she sat shiva!) Her plotting led her to put all her fire and passion behind Fair Fight, an organization that promotes fair elections in Georgia and around the country and actively encourages voter participation and education.

As Abrams told Wired magazine in September, “Democracy is not partisan. That’s where I begin this conversation. Who I choose once I’m inside the voting booth is my business. Ensuring my ability to get inside is the responsibility of government. I’m a progressive Democrat in part because I want the system to be fair. We should not be guaranteed victory, but we should be guaranteed access. Anyone who believes in our democracy should hold that to be a good.”

Despite what President Trump is saying at the moment, voter fraud isn’t actually a thing in America. In fact, statistically, you’re more likely to be hit by lightning than to commit voter fraud, as per the Brennan Center for Justice, a nonpartisan law and policy institute. Voter suppression, on the other hand, is very, very real, particularly among two key demographics: voters of color, and young voters. That suppression manifests itself in various ways, including but not limited to closed polling places; long lines, which can preclude folks from voting at all; broken machines; unequal voter education and outreach; and arbitrarily enforced regulations.

Abrams, 46, took it upon herself to fight the battle against all those who wanted to disenfranchise voters. In just over two years, her remarkable efforts registered 800,000 new voters in Georgia. While we don’t know how these new voters voted, we do know that the margin separating victory from defeat in the state is significantly smaller than that number. Additionally, her activism and voter education efforts empowered unmeasurable numbers of people to believe that their votes mattered.

Of course, we shouldn’t put Abrams on a pedestal — while she’s remarkable, she readily admits that this work doesn’t come easily to her. As she told Wired: “So often, people who have my personality type, my introversion, they shy away from this work. I tell a joke about the fact that — it’s not a joke, it’s true — when we used to have human contact and could knock on doors, I used to pray that no one would answer. I’m like, ‘God, please don’t let them be at home, please don’t let them be at home.’ And then they would open the door and I’d smile and I’d engage, but my heart would be beating fast. I don’t like it. But I’m also very goal oriented, and my goal is to make certain that people in America have access to justice and opportunity. Just being in politics to be in politics is not my thing.”

This idea of doing the work, even though it can be very hard, is a meaningful one — and it is also deeply Jewish. In Pirkei Avot, the Ethics of the Fathers, Rabbi Tarfon wrote, “You’re not obligated to finish the task — but neither are you free to desist from it.”

Yes, Stacey Abrams isn’t Jewish, as snarky commenters on this piece will no doubt self-righteously note. But she is a model of the kind of behavior we as Jews are supposed to exemplify, and the kind I want to emulate: She saw a need and she rose to meet it. She saw injustice, and she said, “I’m not going to rest until that injustice is rectified.” She saw obstacles in the way of full participation in our democracy, and she decided she would devote herself to doing whatever she could to knocking those obstacles down. And, by the way, get the hell out of this lady’s way, because her efforts to fight voter disenfranchisement may have just cleared the path to the presidency.

One woman, one vote. One voice, and she used it to speak up for the good of our nation. Thank you, Stacey Abrams. You may have just saved us all.