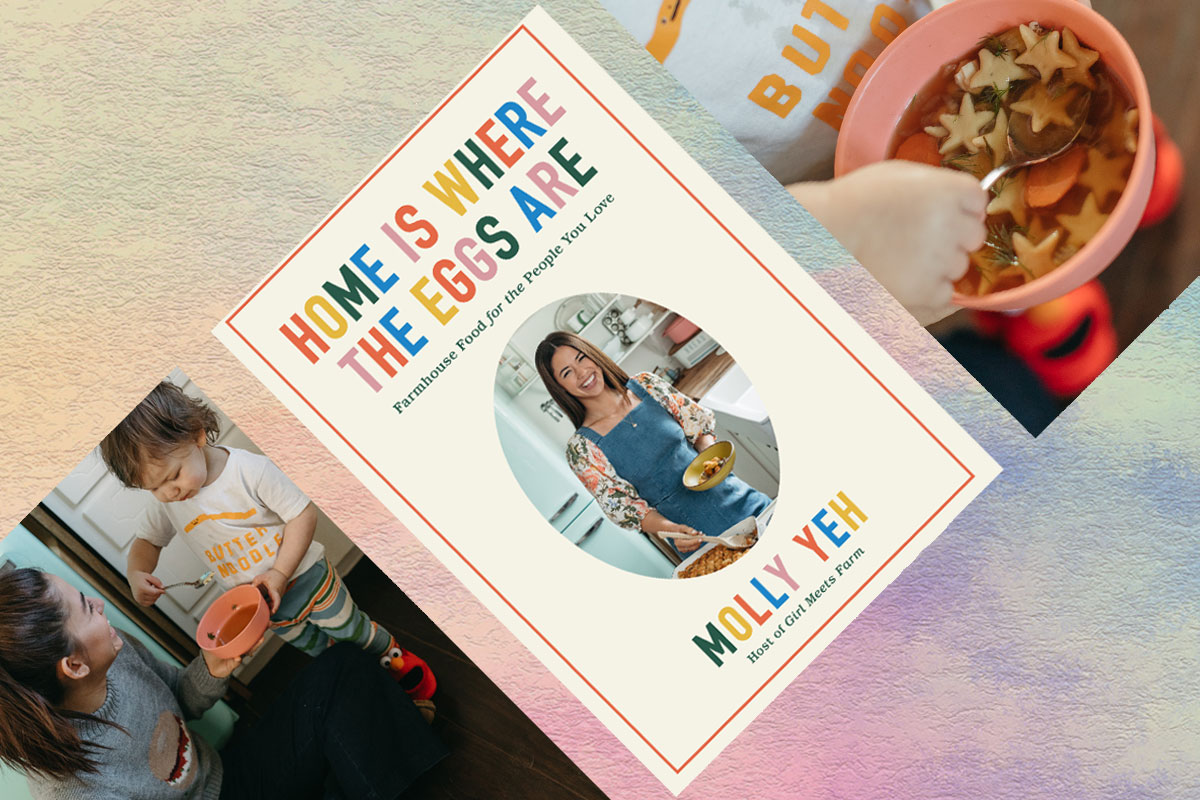 Celebrities, they are just like us! Which holds very much true for Jewish mom and Food Network host Molly Yeh. With two daughters, 10 seasons of her popular show, “Girl Meets Farm,” a new restaurant opened in East Grand Forks, Minnesota, and her third cookbook, “Home Is Where the Eggs Are,” just released, it’s easy to think she might just be Jewish super mom. But part of Yeh’s charm is her Midwestern kindness, quirky sense of humor and sincere relatability. She feeds her kids boxed mac & cheese, embraces being a neurotic Jewish parent and acknowledges that it truly takes a village to be a working parent.

In a recent interview Yeh shared how she gets it all done, the joy of feeding her two daughters, what she cooks in an average week and the inspiration for her kids’ awesome names.

The recipes in “Home Is Where the Eggs Are” feel so cozy, and they are also deliciously diverse. What has it been like to cook and share your culture showcasing your Jewish and Chinese heritage through your recipes?

It’s helped me make deeper connections to my roots and to the Jewish and Chinese communities. Out here on the farm, I can’t walk out my door down the street to Zabar’s and pick up matzah ball soup. If I want Jewish food or Chinese food, I’ve gotta make it. If I can help another Jewish or Chinese person who lives in the middle of nowhere cook up some of their comfort food, I’ll feel like I’ve done my job. And, of course, I also love sharing these dishes with people who are new to them because they’re delicious and I love that this food can help share a story and introduce someone to a culture that they may not know about.

I distinctly remember Bernie’s first Rosh Hashanah when I made her a little tiny braided loaf. It was so cute. I think we had it with hummus and chicken soup. Hummus is great because it’s a puree, it’s like a built-in baby food, baby food for grown-ups (haha). Chicken soup is such a great Jewish food for babies because the vegetables get so nice and soft. Half of Bernie’s vegetable intake is via chicken soup, which is one of the reasons why I make it so much.

Your daughter Ira was born after you wrote most of “Home Is Where The Eggs Are.” Has anything changed about how you eat as a family since then?

Yeah, it’s gotten way sloppier and more thrown together. More boxed mac and cheese, more frozen potstickers. But I’ve also found some new standbys that I can make while wrangling two kids, like salmon and rice covered in mayonnaise and chili crisp. I have a whole list of extremely simple three to five ingredient recipes that I make on repeat. It makes me want to write an even simpler, even more weeknight friendly book than HIWTEA.

Btw, Bernie and Ira are amazing names. Can you share a little bit about how and why their names were chosen?

Bernie was named after Nick’s great-great-grandpa Bernt who came over from Norway and settled the farm, and my great-grandpa Bernard, who was from Hungary. Ira was suggested by the “Girl Meets Farm” director of photography, Jamie, and we loved it because it was unique but easy to pronounce.

In the book you dedicate several pages to tips for cooking with a toddler, which I think is something parents are always trying to figure out. What is your best piece of advice, and what is your favorite toddler cooking disaster or funny story so far?

This is very specific but I think that any neurotic Jewish parent will take interest: Seek out (or make) heat-treated flour and embrace egg replacers like flax eggs or recipes that don’t contain eggs so you don’t have to worry about contaminants getting anywhere, including your child’s mouth. I think every cooking adventure with a toddler is a disaster in its own beautiful, hilarious way.

What has been the most surprising thing about becoming a Jewish mother?

That there really is no limit to the neuroticism.

Two kids, three cookbooks, 10 seasons and so much more on your plate. What’s your recipe for getting everything done? What have you had to put aside since becoming a mother?

I have eliminated most greetings and sign-offs in emails and lowered my standards for grammar and punctuation to make writing emails faster. I also set aside one hour every Friday to plan my next week meticulously. And I also work with very, very wonderful people because it absolutely takes a village! And I’ve put aside blogging 🙁 But hoping one day I will come back to it!

“The most gratifying requirement of being a Jewish mother is having a chicken soup practice,” Yeh says. Find her go-to chicken soup recipe at the Nosher.