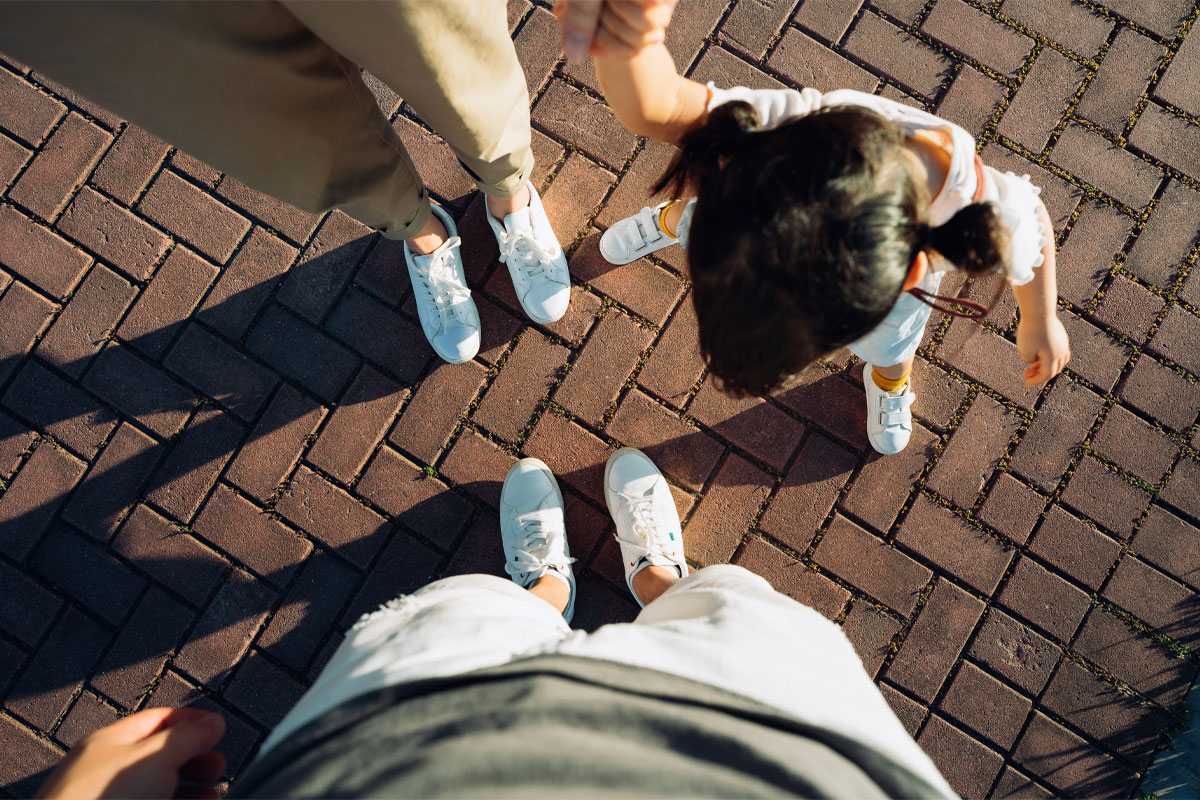 My husband and I dated for nearly a decade before getting married, and then waited several more years before having our first child (sorry, Bubbe!). This gave us a lot of time to talk about what we wanted for our family, when we did get married. With the past few years of rising antisemitism and #stopasianhate, I am not sure even all of our talking and research would have prepared us for what to expect, especially within the Jewish community. The world feels a lot more polarized these days, and we have a responsibility to pave the way for our children to have a more inclusive experience.

In many ways, my husband and I were raised with a very similar set of values, though 23 and Me confirms each of us, respectively, as 99%+ Chinese and Ashkenazi Jewish. We grew up in multilingual households with strong familial ties, cultural traditions, and with years of education steeped in our histories. When we started dating, I would make bad jokes that we got together because we were the only people from our underrepresented communities in our high school.

The first years were challenging. Expecting concern from family and not feeling confident enough yet in our relationship, we kept our relationship a secret from family and friends (again, sorry Bubbe!). When we did start to talk about it, we were already three years into dating and the discussion brought a lot of tears, especially on my side of the family where they had held onto hope I would marry someone who was also Jewish (and Ashkenazi). My husband’s family is very pragmatic, and while I am not Chinese, they were happy our families shared similar values. The tears weren’t because my family didn’t love my now husband, but because they worried about the challenges an inter-racial or interfaith marriage might create. They knew that, in our community, where there were so few Jews, being Jewish was already hard.

As a child, I was often the token Jewish person. With those who expressed curiosity, I delighted in sharing my cultural foods and holidays with friends, inviting them for Shabbat or to play dreidel. But there was fear and hate too, with swastikas drawn on lockers and questions about where my horns were. My parents didn’t want that for our children, and they feared for the experiences our children would have, which they felt would be amplified by an interracial marriage.

We felt that same fear too, and it didn’t just stem from our experiences in the broader community. One of the first times my husband came to synagogue with me, one of the congregants approached him with well-meaning curiosity and asked “where are you from?” This has now become a dreaded question for me, as “Connecticut,” where we were living at the time, was apparently not the answer she was looking for, and neither was his birth state, when she asked for clarification.

That was many years ago but it rubbed me the wrong way then, and I’m still indignant thinking about it now. Did she ask because he didn’t look like her? Would it be acceptable to not answer? How do you go about answering that question without bearing what feels like an unreasonable burden?

Until that experience, I didn’t fully appreciate how our historically insular and largely Ashkenazi Jewish community might be experienced. How exclusionary it might feel. The revelation has changed how I see our community, and has made me more protective, more cautious. Recently, we met a senior member of the local Jewish community. I spoke to her on the phone and she was lovely, offering to include us in their upcoming religious events and introduce us to members of the community. The three of us then went out of our way to meet in person. And then we never heard from her again. Not once. Is this because she saw our multi-racial family? Would it have changed her perspective to know that we keep a kosher household? That my husband is Jewish? That our daughter’s favorite songs are Dayenu and Chad Gadya? (Who doesn’t love a good Passover sing-a-long, really?). Should I feel compelled to explain our Jewishness?

In recent years, the composition of Jewish communities in the US has shifted. According to a Pew Research Center study about Jewish Americans in 2020, only 3% of Jews over 50 identify as Hispanic, Black, Asian, another race or multiple races, compared with 13% of Jews under 50. While that number is still small, it’s growing. And as it continues to grow, we need to ensure our communities are prepared with the mindset and language to be inclusive and equitable for all.

Part of that is rethinking how we raise the next generation. According to the American Academy of Pediatrics, a baby’s brain is able to notice race-based differences in people by just six months old. By ages two to four, children can internalize racial bias. For those of us with young children or who interact with young children, this is a wonderful reminder that it is never too early to start talking to them about race and identity.  I especially love the PBS Kids Talk About: Race and Racism video, and associated articles for parents, though there are many other resources out there.

In our household, we intentionally expose our daughter to both of her cultures, traditional foods, and languages. She spends quality time with her grandparents and Holocaust-surviving great-grandparents. In fact, when she was a year old, we moved cross-country to be close to family, and picked a town with racial and religious diversity. We wanted our daughter to grow up in a community where she can learn about the world through multiple lenses, and where she can celebrate differences over sameness.

We talk to her about her identity, anything unique to her like her preferences, personality traits, or appearance. With our toddler, this started early on with traits she observed like hair texture, i.e. “I see you playing with Mommy’s hair. Mommy and Bubbe’s hair is curly, and your hair is straight. Bàbà’s hair is straight too.” (Bàbà is Mandarin for Dad.) As she gets older, and notices more of the world around her, we continue to expand that vocabulary to include skin tone and other characteristics.  If nothing else, we hope that this gives her the right words to talk about her identity later, if (this is a big if!) she chooses to. We also go out of our way to look for children’s books that allow her to see herself and others in what she reads. (Side note: why are there not more books like this? Publishers – just because these books may not be commercial hits doesn’t mean they’re not needed!) She, like all toddlers, has a strong sense of “no!,” and as she gets older, we encourage her to use that voice to call out when something doesn’t seem right, to be an ally for others.

I’m thankful for the anti-racist work so many members of the Jewish community lead. This shows up in the work that inclusion committees that synagogues around the country are creating  (including our own!), the work that the Jewish Multiracial Network, Be’Chol Lashon, and so many others are doing, and the way that PJ Library is nurturing diversity in children’s literature. Change is coming, and there is real energy being invested in that change. It is a redefining of our Jewish community and it is a journey that will require us to rethink how we show up.