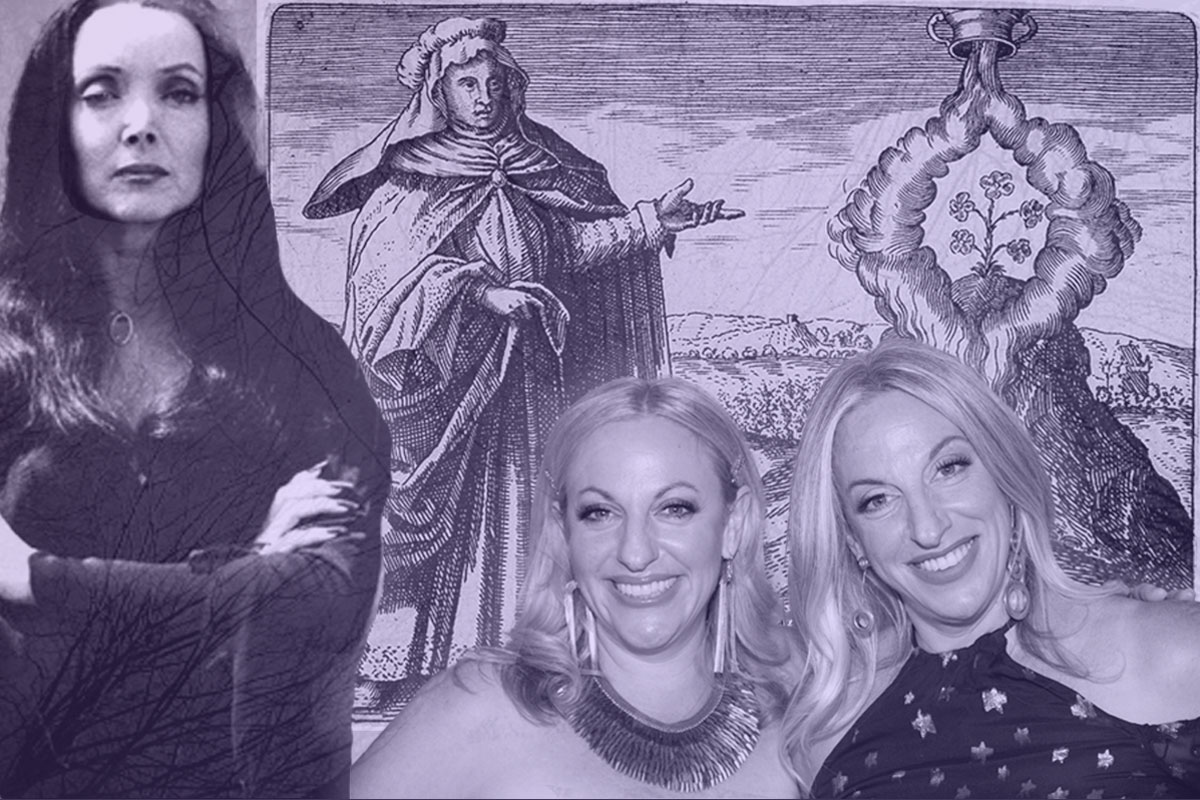 Images of Carolyn Jones as Morticia Addams and Mary the Jewess via Wikimedia Commons; image of Tali and Ophira Edut via Getty Images

I’m a huge fan of Halloween. I love the spooky decorations, macabre fall vibes and repeated “Coraline” movie nights. Recently, many Jewish circles are becoming more accepting of Halloween culture — even some synagogues, where education directors (like myself!) are weaving Jewish folklore into spooky carnival days coinciding with the end of October for their religious school students. This is in stark contrast to how taboo it used to be to even mention said pumpkin day in Jewish day school or religious school.

The greater tolerance for this fun, spooky celebration has inspired me to intertwine more of my Jewish identity into it — including by finding out more about all the Halloween-worthy, badass Jewish women out there. From magical, to enchanting, to supernatural, these women (some fictional, some real) deserve their time in the spotlight. Read below to find out more about five mystical Jewesses you should know about!

Known alternatively as Maria the Jewess, Maria the Prophetess, or Maria the Copt, Mary the Jewess was born in Alexandria, Egypt sometime within the 1st-3rd century CE and is recognized as one of the first-known founders of alchemy (with some sources claiming her as the founder). While alchemy is thought of today as pseudo-science, with ancient scholars feverishly trying to turn lead into gold, it was actually the foundation for much of modern chemistry and medicine. Google a list of the most famous alchemists and you’ll probably find that Mary turns up as the only woman amongst a lengthy list of men: The fact that she is credited with being the founder of this male-dominated field from so long ago — and Jewish, no less — makes me absolutely kvell!

Not only is Mary significant historically, but one of her inventions was the basis for a modern device still used in labs and kitchens around the world today: the bain-marie. Though some argue that she was not actually the first person to ever use a water bath system, it is regardless believed that the bain-marie is eponymous of Mary the Jewess, ancient alchemist. (I never would have thought I’d be fangirling over a double-boiler, but here we are.)

Morticia Addams – Fictional (but played by a real Jewish actress)

OK, I’ll admit that the “Addams Family” franchise, to my knowledge, never specified that Morticia is a hot, spooky Jewess. However, did you know that the original Morticia Addams from the black-and-white ‘60s show was played by a Jewish actress? Yup, that’s right — Carolyn Jones, the original Morticia, converted to Judaism when she married her second husband (out of four), Aaron Spelling, a few years before she took on the iconic role. (Maybe this explains Morticia calling Gomez “bubbelah” in the first episode.) Regretfully, I could not find any photos of Carolyn actually practicing anything Jewish (how I lust after even a single photo of her lighting a Hanukkah menorah), though I did find an old newspaper article detailing her fourth wedding, which happened under a chuppah to actor Peter Bailey-Brent, who wore a yarmulke, with a rabbi officiating! Given that Carolyn set the whole tone for Morticia Addams moving forward, I think Morticia deserves honorary status as a Jewish mother.

Because, let’s face it: Not only was she portrayed by a Jew, but Morticia does have some Jewish motherly traits. There’s an episode of the original show in which her son, Pugsly, goes out and joins the Boy Scouts — and Morticia is terrified that he is associating himself with the wrong sort and losing a sense of their familial identity, assimilating too much into the culture of their Anglo surroundings. Not to mention, her family is the one family on the block who is noticeably different from the rest: they eat different kinds of food, have different names, celebrate holidays differently, and even dress differently than all their neighbors. Seems like a relatable Jewish American mother, no?

Long-time professional astrologers Tali Edut and Ophira Edut were born on December 2, 1972 in Detroit, Michigan. Their mother was an American rabbi and their father an Israeli landscape artist. They have been active astrologers since the ‘90s, and are well-established amongst pop magazines like Cosmopolitan, Elle, Refinery29 and Mind Body Green. Recently, you might have seen advertisements for their new Prime Video reality dating show, “Cosmic Love.” (I have not watched it because my reality TV escapades begin and end with the most basic of home makeovers and friendly crafting competitions — but it’s nice to see them thriving.)

Serah, Daughter of Asher – Biblical & Midrashic figure (who may or may not have actually existed)

Serah was the granddaughter of our biblical Jewish patriarch, Jacob. Just about everything we know concerning Serah comes from Midrash, particularly centering around the Joseph and the Coat of Many Colors story. When Joseph’s brothers found out Joseph was still alive, they were worried about how they’d reveal the news to their father, Jacob. The guy was over 100 years old at this point, after all, and they didn’t want to give him a heart attack. So they enlisted their niece Serah’s help as a talented musician, and she played a song on her lyre for her grandfather. In the song, she sang about her uncle Joseph actually being alive and ruling as the King of Egypt. This put Jacob in a relaxed, happy state of mind — so that when royal chariots with gifts and footmen from Joseph began arriving outside their door, Jacob wasn’t thrown into a complete state of shock. As a reward for what she did for her grandfather, the Midrash claims that Serah was granted the gift of immortality and even entered the afterlife without ever physically dying. Being immortal, she lived a long-ass time, and the Midrash credits her as being the “wise woman in [the city of] Abel Bet Maakah” who gave King David the good advice that prevented him from slaying all the inhabitants of her city. No biggie.

Of course, these women make up just a tiny fraction of all the incredible enchanting, magical Jewish women out there to learn about, and you should definitely research more. In the meantime, try steering your Friday night dinner conversation toward these five obscure but supernatural, spellbinding Jewish women. Bonus points if you dress up as one of them to hand out candy at your door this year — and confuse all the neighbor kids by launching into the Biblical genealogy of the immortal Serah!