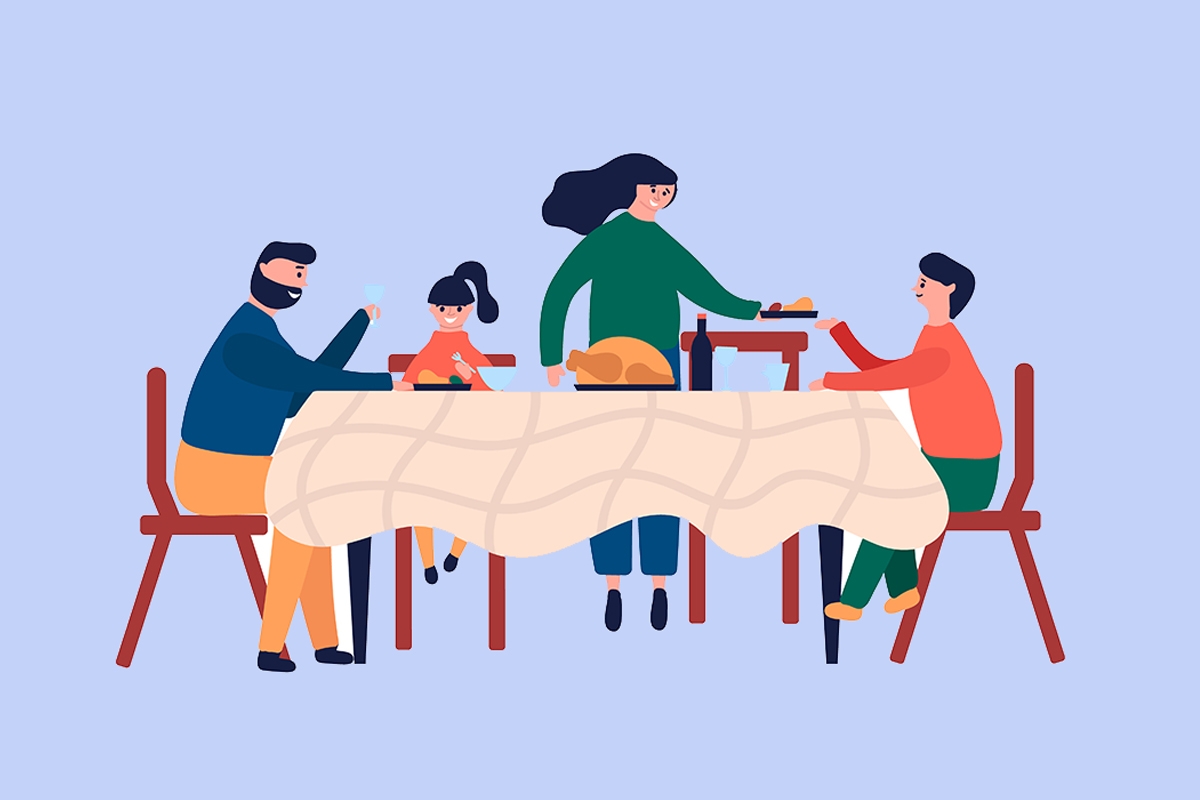 When I was 25, I fell in love with a Catholic man who attended Mass every Sunday. This was inconvenient because I was Jewish (with an asterisk). Growing up, my family owned boxes of Christmas ornaments and not a single menorah. But in the same way that my hair was brown and my right knee hurt when I ran, I longed to celebrate the Jewish High Holidays and send my future offspring to Hebrew school.

Undeterred, Bill and I got married, and we soon moved to Seattle for his work. That’s how we landed, one winter night in 1998, at the Jewish Family Services center, where a counselor running our interfaith couples group urged us to make Friday night Shabbat dinners a cornerstone of our family’s observance. “It doesn’t have to be a fancy meal,” she said. “You can light the candles and bless the wine over a box of pizza!”

Bill, above all else, wanted a household that worshipped regularly and together. Plus, he was always down for pizza. So, if this was how my husband would come around to Judaism, then I could embrace Shabbat. However, there would be no Domino’s on my dining room table. Rising to what I imagined should be a sacred occasion, I roasted briskets. I grilled salmon on cedar planks. I braised chicken, both on the bone and off. I whipped up sauces of red wine and white wine and citrus and cream and tomato. I sourced in-season vegetables and artisanal pasta and cobs of corn, sweet to the bite.

Half a dozen years and three little kids later, I was exhausted, and ready to give up on Shabbat. That’s when I discovered Roast Chicken with Two Lemons, from Marcella Hazan’s brilliant cookbook, Essentials of Classic Italian Cooking. The description alone eases the reader into a soft, culinary featherbed. “If this were a still life, its title could be ‘Chicken with Two Lemons,’” Ms. Hazan wrote in an introduction to the recipe. “That is all there is in it. No fat to cook with, no basting to do, no stuffing to prepare, no condiments except for salt and pepper. After you put the chicken in the oven you turn it just once. The bird, its two lemons, and the oven do all the rest.”

Actually, Victor Hazan wrote those words. He was Marcella’s husband, and her collaborator on each of her six cookbooks, including 1992’s Essentials. She scribbled down the recipes in Italian; he translated them into English and channeled her voice as he typed the accompanying instructions.

The Hazans met in the early 1950s, when she was Marcella Polini, a teacher of natural sciences and biology at a teacher’s college near her family home in Italy. He was an Italian Jew who’d fled his homeland as a child, at the outbreak of World War II, and growing up in the U.S., he dreamt of the cuisine ever since. The moment he reached adulthood and saved enough money for boat fare, Victor Hazan returned to his homeland — where he promptly met Marcella.

Four years after she died, in 2017, he told an interviewer about that time: “It was like being accepted into Heaven again. The seafood I had in [Marcella’s hometown of Cesenatico] … was the only seafood being caught every night out in the Adriatic by the boats… It was everything I had been thinking about coming to … It happened to coincide with a romance that was growing between me and Marcella. You couldn’t have a better combination of sensual pleasures.”

I am no stranger to Victor’s twin infatuations. For more than two decades, I believed myself to be in a kind of one-way, mystical conversation with the author herself. I first fell in love with Marcella, as I call her in my head, as a newlywed, when she showed me how a can of tomatoes, a stick of butter, and an onion could metamorphosize into the sweetest of pasta sauces. From her I learned what to do with beets, both the roots and the greens. She taught me the difference between frittata and risotto, and how to pair the right pasta shape with the correct sauce.

But my small children didn’t eat beets, or greens. They enthusiastically rejected frittatas and risottos, not to mention sauces and briskets. They liked their pasta plain with butter and their chicken fingers from the box. Bill and I — already bickering over whose turn it was to get up with a kid in the middle of the night, or which one of us deserved more precious “me” time — added religion to the list. Unlike Shabbat, attending Mass, my husband observed, involved little more than simply showing up at church.

I’d had my eye on Roast Chicken With Lemons for a while. It sounded like Shabbat on a plate. But I’d never actually roasted a whole chicken before. I was intimidated by the complexity of keeping the breast moist while ensuring the slower-cooking legs weren’t underdone. Fortunately, I found that Marcella’s lemons take care of that. You poke each of them twenty times with a trussing needle, and stuff them in the bird’s cavity. There, the oozing juices perform gastronomic wizardry. The bird that eventually emerges from the oven is evenly cooked, golden brown, and tastes exactly like you imagine a chicken should taste in your dreams — a little salty, a little peppery, a touch tangy, and essentially chicken-y.

My aim was simply to find a recipe I could manage in the time I had, but Roast Chicken with Lemons turned out to have another, nearly magical quality: everyone in the family liked it. It’s also the one dish that doesn’t bore me. “Make sure you mention,” our oldest child, Liam, said when he found out I was writing this piece, “that it’s my favorite meal.”

We’ve sat down to a Roast Chicken with Lemons almost every Friday night for the last 16 years. The dish has seen us through Hanukkahs and home renovations, Rosh Hashanahs and graduations, two bar mitzvahs and a bat mitzvah. I’ve since come to grasp how that interfaith counselor, with her box of pizza, as well as Marcella and Victor Hazan — with her golden-hued chicken and his beguiling translations — were teaching me the same lesson: The important things in life aren’t fancy or elaborate.

I now understand, as my husband insisted long ago, that routine soothes and ritual binds. The crowning moment of the week can be something as simple as the crackle of chicken skin, roasted to perfection, as it’s cleaved by a knife. That’s something that happens after we’ve blessed the candles, the wine, and the braided challah bread, and we’re waiting for the first bite of flesh that confirms that, yes, we’re here, we’ve made it, together. Friday has arrived once again.