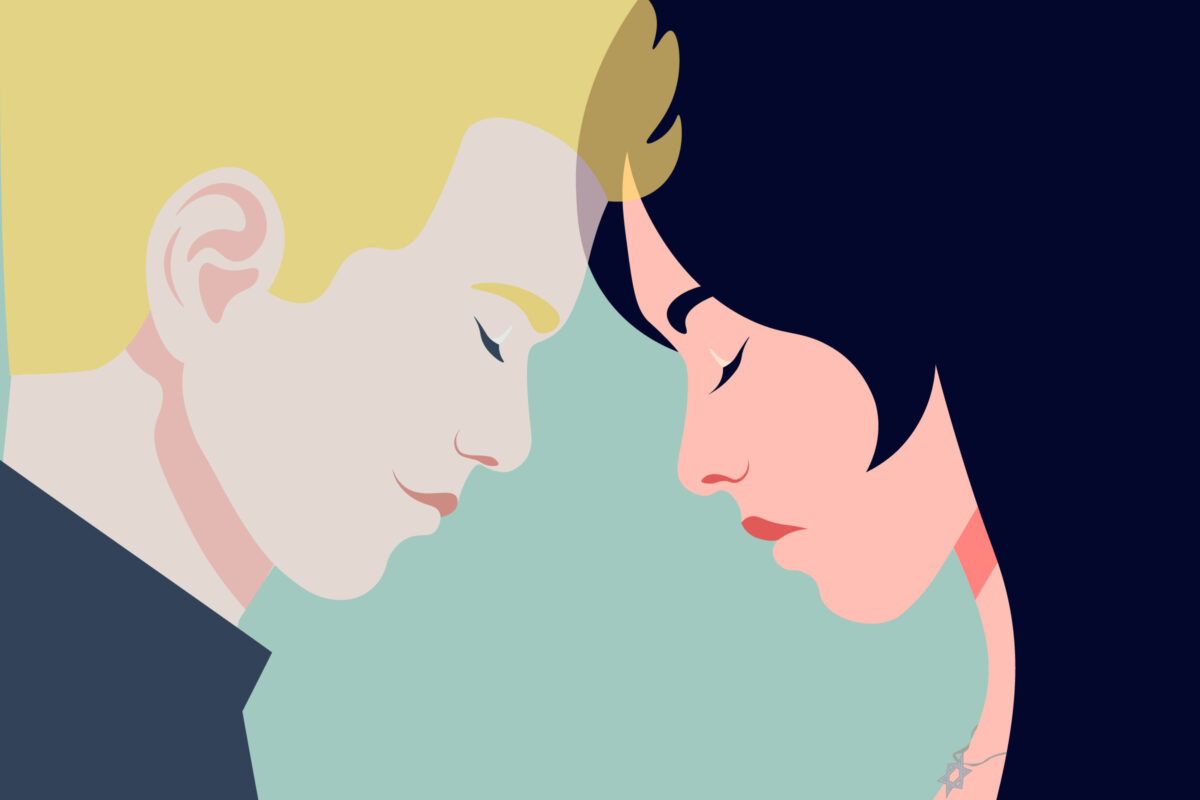 I celebrated my 39th birthday in a hospital suite with my husband the night before his second craniotomy. We lit candles in our sweats and ordered hospital-prepared filets. Because of Doug’s seizures, we couldn’t drink wine, so we toasted with Perrier and sipped to an uncertain future.

In Doug’s final months fighting a brain tumor, he and I talked about finances, burial vs. cremation, and how I could find a husband who would be a great father to our sons.

Doug was raised Catholic and he sensed that I wanted to remarry someone Jewish, even though I had never articulated it.

While Doug tolerated my Shabbat candles and Temple membership, he didn’t share my enthusiasm for cultural touchstones. He never rooted for Jewish screenwriters at the Oscars, like I did; he didn’t like “Annie Hall.”

He also balked at substantive expressions of Judaism, like a bris for our sons.

“Safer in the hospital,” he decided with regards to their circumcisions.

My search for a husband began three months after Doug died. My friends warned me it was too soon for whatever I was contemplating. I told them I’d started mourning Doug a year before that, after he had a stroke, lost his short-term memory, and had a portion of his brain removed.

After Doug’s death, I craved what I knew, which was Doug.

Saturday nights, especially, I missed the pleasure of pulling into the garage after dinner out and making familiar conversation with someone I loved.

“Did you bring the garbage around?”

Memories of such trivial interchanges, so meaningless and comforting, were succor to someone lugging cans alone.

Our love affair began in college when the differences between us felt exotic. He’d bussed trays and caddied through high school; I’d only worked summers at day camp. He had been raised on scrapple and Little Debbie snack cakes, foods my mother never would have allowed in the house, had she known what they were.

The first time I met his grandparents, his grandmother — whom even his parents inexplicably called “Nanny” — looked at me and said, “You know, she could pass for Italian.”

My grandmother couldn’t have said the reverse, about Doug reminding her of a Jewish boy. Doug looked like Hans Brinker with white-blonde hair, green eyes, an athletic build, and perpetually rosy cheeks. (The cheeks were probably rosacea, but I preferred to picture him on a pond with ice skates.)

He could sleep until 1 in the afternoon. If I slept that late, my parents would have assumed I was dead.

I admired how calm his family was, in contrast to mine. My parents kvelled about good grades but they also hovered, once insisting that a college friend meet me at Penn Station because they didn’t want me taking the Long Island Railroad alone.

Doug’s parents rarely gave compliments, and they didn’t blink after he bragged about driving the curves on the Schuylkill after keg night at a bar near Penn’s campus.

Doug died young, but at least he wasn’t afraid to live.

“Take care of each other,” his mother said to us before we left on a six-week honeymoon through Europe.

We had hotel reservations for just one week; Doug said we’d figure out the rest from pay phones in train depots — this was 1987, after all, long before smart phones.

“Wouldn’t it make sense to save your wedding money?” my mother asked.

Of course, there were complications in our differences that I couldn’t foresee. A month before we were married, for example, I was hurt when Doug chose a ski trip with his friends over a Passover seder at my cousin’s house. And then, 12 days after I had a c-section, I didn’t understand why we had to rush to his parents’ house for Christmas. I groused and went.

But it wasn’t only the holidays when I longed for familiarity. I felt a pang when we were at my best friend’s house for a barbecue, and her husband casually used the word “schvitzing” in conversation, which is something Doug would never do.

In April 2000, everything changed. We were on vacation 3,000 miles from home when Doug had a seizure in the hotel bathroom. Less than an hour later, he was diagnosed with a glioblastoma multiforme at Scripps Hospital in San Diego. Doctors asked if he wanted a priest for last rites. He said he preferred a rabbi.

“After all this time, it’s kind of what I’m used to,” he said. “A rabbi will get me; he’ll understand us,” he said, as they wheeled him off for his first craniotomy.

All through his illness, we continued to meet with our rabbi at home to talk about the future. Our conversations included a discussion about his desire to be buried in a Jewish cemetery, which surprised me immensely.

I worried it was the brain tumor talking. “Are you sure?” I asked him.

This was a man who’d always been silent at seders and called gefilte fish “the Jewish version of a hotdog.” Now he clearly wanted me to marry a Jewish man when he passed away. He scouted several potential Jewish husbands, including one neighbor and a colleague of his who was getting a divorce.

For someone who wasn’t born Jewish, he was really becoming a mensch — and a bit of a shadchan (matchmaker), too.

Reentering the dating world is never easy, and those dating when recently widowed should be a protected class.

There was the guy I met on JDate who did a decent Doug impression, saying, “I’m the least Jewish Jew you’ll ever meet.” Then there was the A-Rod enthusiast, a fix up from someone in my kids’ Hebrew School, who thought the iconic Japanese filmmaker Akira Kurosawa was a chef.

Doug didn’t know the man I eventually met and married. Hal and I were fixed up by my best friend, Hillary, and Hal’s sister, Beth — we have since been together 17 years. He was raised in a kosher home and continued to keep kosher in college and in his first marriage. His late wife had been active in Hadassah.

“Thanks for doing the heavy lifting with my sons,” I can imagine Doug saying to Hal. “And for making Lissie so happy.”

In the end, Doug was, in fact, buried in a Jewish cemetery. In a nod to his heritage, he’s in the Spinoza section of B’nai Abraham Memorial Park. (OK, Baruch Spinoza was actually a Dutch person with Sephardic Portugeuse heritage, but his name at least sounds Italian.)

Doug wasn’t here to toast when our older son got into medical school, or when our younger son took a job in data engineering. But he understood the parenting job that he started might be easier for me with a man who shared my religion.

His generosity resonates, especially during a time when so many young parents are grappling with the realities of the pandemic and the upheavals against racism in the streets. If I had been sick, I don’t know if I would have been able to give him such a gift, and I am profoundly grateful for it.